Nestled within the jagged shoreline of the Laguna coast, Victoria Beach is a secluded paradise topped with cute beach cottages and impressive designer homes.- By Laura Gosselin | Illustration by Ken Harris | Photos by Jody Tiongco

South of Main Beach, quaint and historic Victoria Beach is one of Laguna’s most private public beaches. It’s where waves crash against the “Norman turret,” a spiral staircase built in 1926, which used to link the beach to one of Laguna’s most famous homes. The earliest known house in the area dates back from 1915 and was originally called Laguna Heights. Today, the neighborhood now known as Victoria Beach is comprised of Sunset Terrace and McAullay Place that branch from the U-shaped Victoria Drive. It is a mish mash of oceanfront and ocean view luxury homes, as well as more eclectic cottages and pre-1940 beach houses. From the windows, decks and balconies of these homes, the sunsets are nothing short of breathtaking. 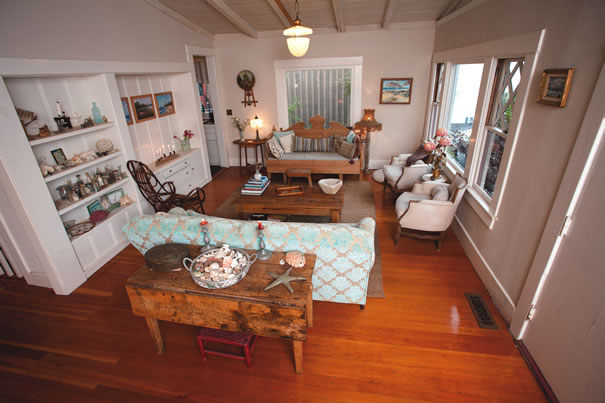 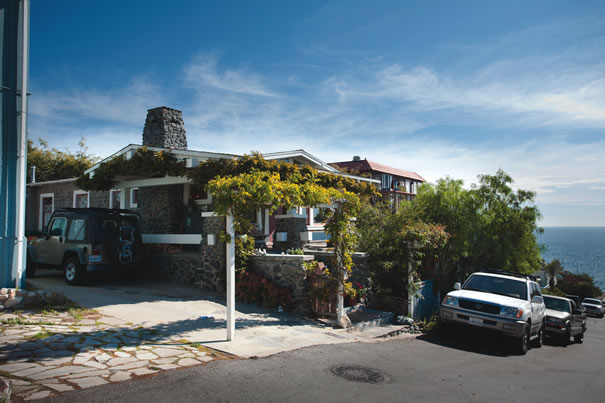 Located in the heart of Sunset Terrace, the Doran family live in a traditional Craftsman cottage that dates back to 1919. The home was constructed before there were streets in the neighborhood, and when Coast Highway was merely a dirt road. Once used as a sandwich and teahouse for tent campers on the bluff by Goff Rock, the original house is still intact—with improvements, of course.

“We have replaced the foundation, plumbing and wiring, re-set the original rope and pulley windows, and insulated and re-shingled the walls. We love the friendly warmth of all its rustic old details,” Jill says.

Jill and her husband Mike bought the house in 1997 from Ben and Marie Milliken, who owned it for 60 years and still lived next door. When the Dorans were having trouble raising the down payment in time to buy the house, Ben and Marie allowed their family of four to move in for a six-month rent-free escrow period so that they could save up. They did this because they wanted to hear children playing outside again.

“It had been vacant for several years, and on our first night, there was a raccoon fight inside the house and Mike chased them out with a hose,” Jill says. “The fixtures, doorknobs, even the toilet had been removed. We hunted piece by piece through architectural salvage warehouses.”

The Doran family began their official restoration of the home in 1998. Jill served as the general contractor (no experience, just winging it), and Martin Butzow was the architect. His design for three historically correct bedrooms and bathrooms with central heating—carved out of the dirt cellar and crawl space under the house no less—was no small feat. The original old walls were different lengths at the bottom than at the top, and nothing was level or plumb. “The finished carpentry was done by Jay Pitt, and I can’t say enough good things about his craftsmanship and creativity in matching the original details of the house,” Jill recalls.
Living through the extensive renovation is a memory Jill recalls with bittersweet emotion. The Dorans and their dog lived in the kitchen and slept in the dining room. With one functioning electrical outlet dedicated to the refrigerator, and the other for a lamp on an extension cord, if someone took the lamp with them into the bathroom, the family would sit in the dark until they returned. 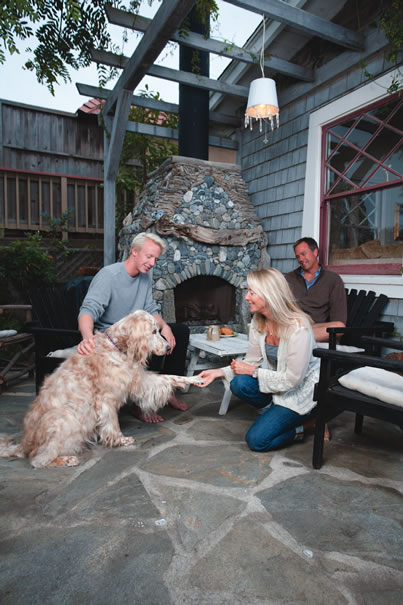 Their long stint of “roughing it” paid off in the end though. After doubling the square footage of their 1920s classic cottage and adding modern, reliable conveniences while staying true to the original footprint and keeping the character of the house, the family is counting down to the home’s 100th birthday—a mere seven years away.

A brief jaunt down Sunset Terrace from the Kirkland residence, the Papa family lives in a traditional cedar board and batten construction, 1920s-style beach cottage with whitewater, Catalina Island and hillside views. Owners Holly and Eric Papa met their junior year at Lagun 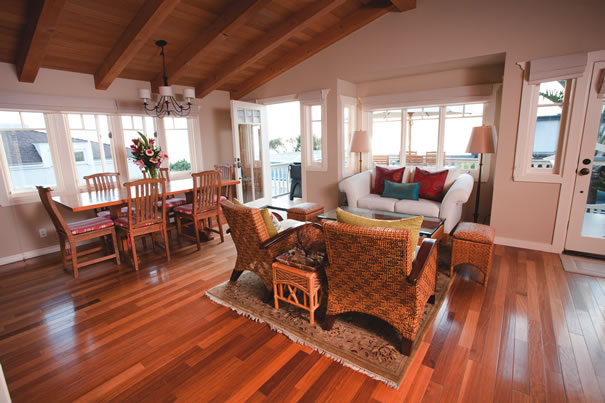 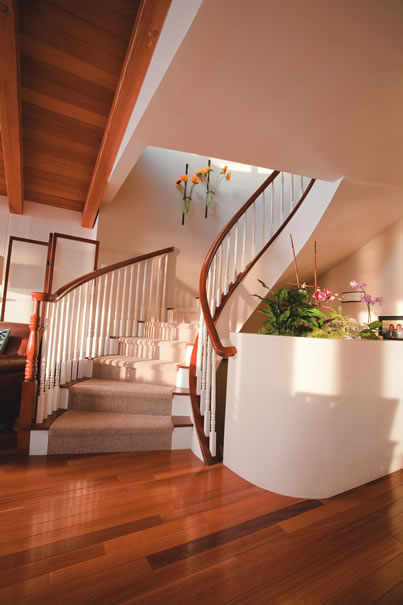 a Beach High School. They bought the house in 1995 and had planned to just paint, re-carpet and move right in. However, Eric—artistic and creative with design—had bigger ideas.
Holly recalls, “Well, I took our baby on a trip to Hawaii with my parents, and when I got back, Eric had torn almost the whole house down! We filled out all the pre-approved credit card offers that came in the mail, borrowed from both of our parents and built our dream home, slowly but surely. It’s been a work in progress ever since.”
Like many of the homes in Victoria Beach, architecturally, the Papa home has stayed true to the traditional cottage style.
With Craftsman-style wood-beamed, angular ceilings in the living room that flow seamlessly out to outside deck, the home is styled with a fun, yet refined beach-y feel.
Although the home is small by today’s standards and has a backyard Holly compares to the size of a postage stamp, the Papa family has made the most of their space.
The backyard is equipped with a Jacuzzi, and off the main living room is a deck, known locally as “the veranda.” The veranda is a favorite hangout where the family does all their eating, drinking, reading, card playing and visiting under a big umbrella.
Holly explains, “Whether it’s summertime and we’re greeting our neighbors as they walk up the hill from the beach, or it’s winter and we’re bundled up with big sweaters and candles blazing, the veranda is our favorite place to hang out.”
The Papa family particularly loves their home because they like the hidden element of the beach, which neighbors and locals alike pretty much get to enjoy themselves, due to the lack of public parking and off-the-beaten-track location.
“Hearing the waves crash and smelling the salt air is the best part of our home,” Eric Jr. comments.
Thirteen-year-old Teddy is pleased with the proximity of his home to his grandparents’ place, who built a home from the ground up on Victoria Drive. He says, “I love being so close to the beach and my grandparents!”  LBM 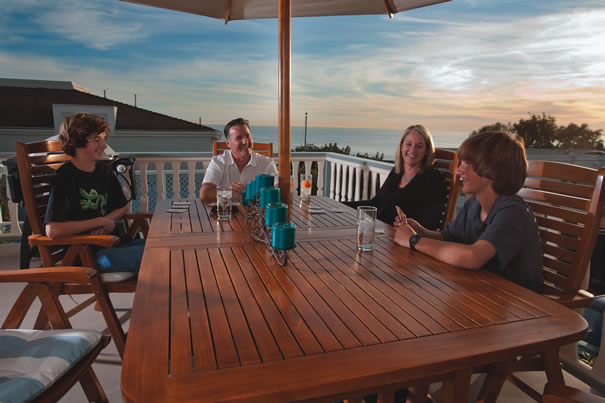 Just a half-minute walk away from the Dorans, Eric Kirkland and his wife Laurie have lived at their 1936 Laguna Beach “charmer” on Sunset Terrace for 29 years now. This is where they have raised their two kids, Miranda, 25, and Wyatt, 18, both of whom are now fifth-generation Kirklands living on Sunset Terrace. 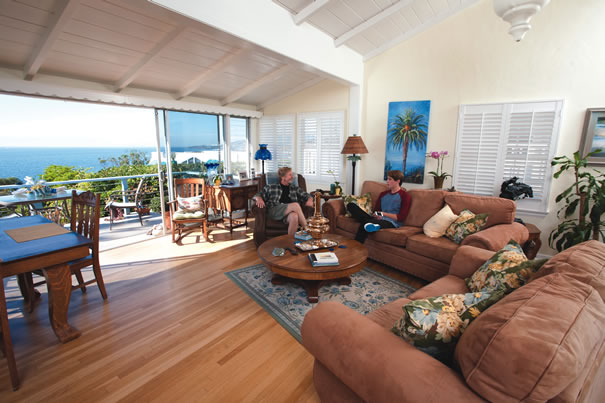 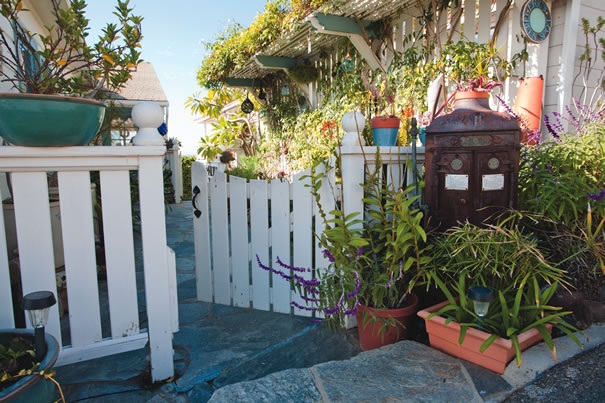 Eric’s great grandparents built on Sunset Terrace in 1906 when his great-grandfather and grandmother paid $500 for four lots and a house. The home they built on one of their lots was a typical single-wall constructed home, surrounded by ponds and walls made from the indigenous rock. It had a large adobe fireplace located in the center of the house, which provided heat in the colder months.
Eric married Laurie and bought a home on Sunset Terrace. Keeping the tradition of his the vision of his ancestors, Eric has kept his 1936 home in its original condition, though doing some minor cosmetic work, including painting and retiling while also lovingly re-landscaping the garden. However, Eric’s favorite part of the house is the garage.
“I call it my ‘dog house,’ ” Eric laughs. “I’m always in the dog house because it’s where I’ve worked all these years—store my toys, have raised the kids.”
With neighbors who have also lived in the Victoria Beach neighborhood for decades, the Kirklands feel like an extended family has grown beyond just their own.
“We are very connected to Victoria Cove due to our family heritage,” Eric explains. “In addition, it’s an isolated cove and continues to be nice and quiet.” LBM