Once a remote location with poor accessibility, Arch Beach Heights was all but completely ignored after its subdivision in 1911. At one point, the lots were even given away as a promotional gift with the purchase of an annual Los Angeles Times subscription, according to the Laguna Beach historic resources inventory. The perception of the neighborhood finally changed, however, when a paved road was added in 1933. Today, the eclectic range of architectural styles and panoramic views contribute to Arch Beach Heights’ appeal.

“We’re an outdoor family and this neighborhood fits our lifestyle so well,” resident Steve Britt explains. “Being up here, we walk to all of our favorite outdoor and neighborhood activities.” 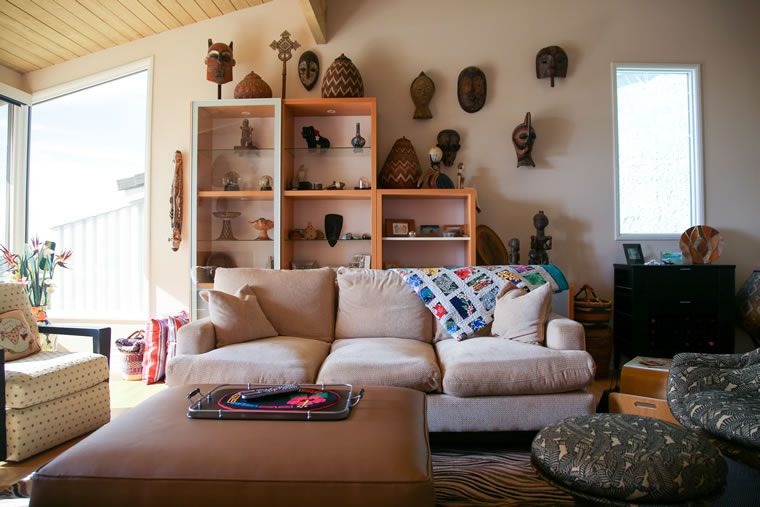 “This is one of the first two homes on this block,” Claudia Redfern says of the residence she and her late husband Kurt purchased. “All of the original homes were long and narrow.”

The couple came to Laguna Beach when Kurt was transferred as a Marine Corps pilot. He was offered the opportunity to stay in Orange County and fly corporate jets, making the purchase of their Arch Beach Heights home more permanent.

In 1983, the house underwent a major remodel: The carport was removed and the roof was pushed out; the kitchen and dining area were relocated upstairs; and a stairway, fireplace, half-bath and deck were added. In 2010, the kitchen cabinetry and counters were replaced, and the upstairs stairway and bath received updates.

“We made some pretty big changes to our house, especially in the first renovation,” Claudia says. “But some of the original pieces were also kept intact.” One of those original pieces is the stained-glass window in the living room, which was designed by Claudia’s husband. “When we bought the house, there was a small, plain window where the stained glass is now,” she explains. “Kurt loved to add details to the house.” 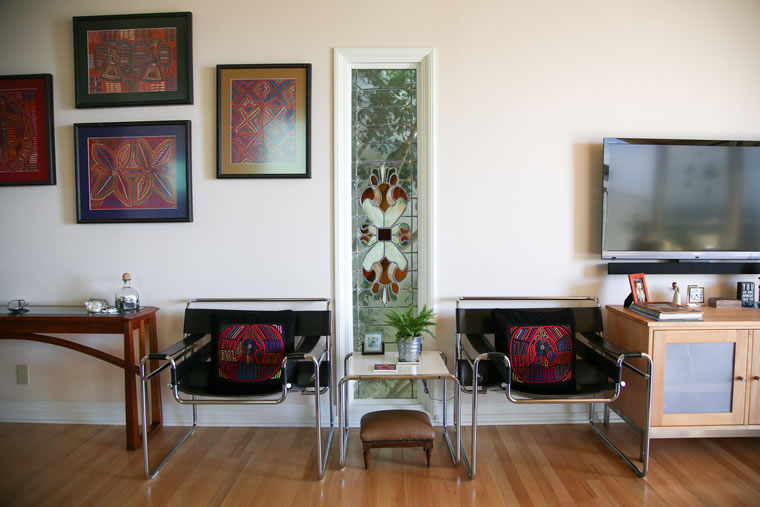 The three-and-a-half-story home shows more evidence of Kurt’s contributions, including the intricate tile work leading to the downstairs bedroom and the oceanic-themed tiling and mosaic detail in the shower.

On the upper floor, the high-ceiling, open living area has a panoramic ocean view and displays many of Claudia’s treasures—collections of art and cultural representations of the places the couple visited together. “Randy Bader, an exhibitor at the Festival of Arts, handcrafted the display table to enable me to show everything,” she says.

The living room furnishings have clean lines and are covered with Sunbrella fabric to prevent fading from sunlight, which spills through the nearly floor-to-ceiling windows offering views of the deck and ocean. The kitchen, which looks down to the living room over a half-wall, displays green granite countertops and a green glass backsplash with stainless steel appliances. Kurt pushed out a wall in the dining nook to the deck, creating extra storage inside and a serving area outside.

“I can look to the west and see the Pacific or to the east and see snow on the mountains,” Claudia explains. “This house represents more than 30 years of my life.” 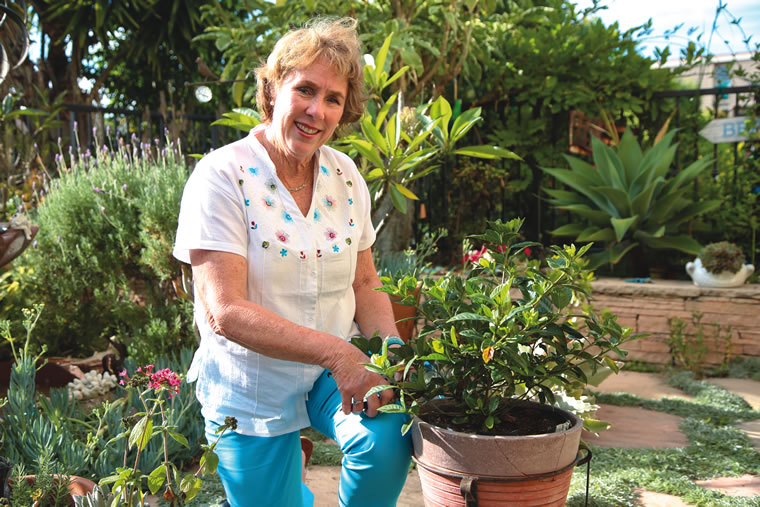 DAY JOB: Claudia is in charge of reception and student services at Top of the World Elementary School. 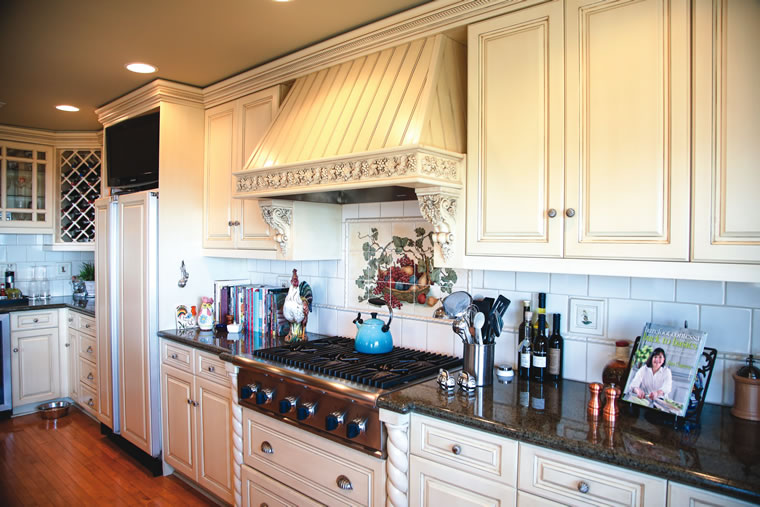 Diane and Steve Bridges originally built their Spanish-style home to sell, but decided the two-story corner property with its panoramic ocean views was perfect for their family. In 2003, they remodeled the interior, knocking out the wall between the kitchen and living area to make the space the central meeting place for everyone.

“We spend the majority of our time on the main floor,” Diane says. “It’s open and spacious. I like to cook and talk to my guests or family at the same time.”

The floor plan remained the same after the remodel, but Diane explains that the living space—which is decorated in a theme that reflects Tuscany, Italy—is much more open and inviting. “Much of the furniture that we have in the living room was custom-made,” Diane says. “This floor is cozy and comfortable, which is probably why we spend so much time here.”

The sunken living room and its marble fireplace are visible through an arched opening in the dining area, which is accented by sage green walls, custom chandeliers and custom railings. Meanwhile, the kitchen updates also include granite countertops and Asian beech wood flooring. 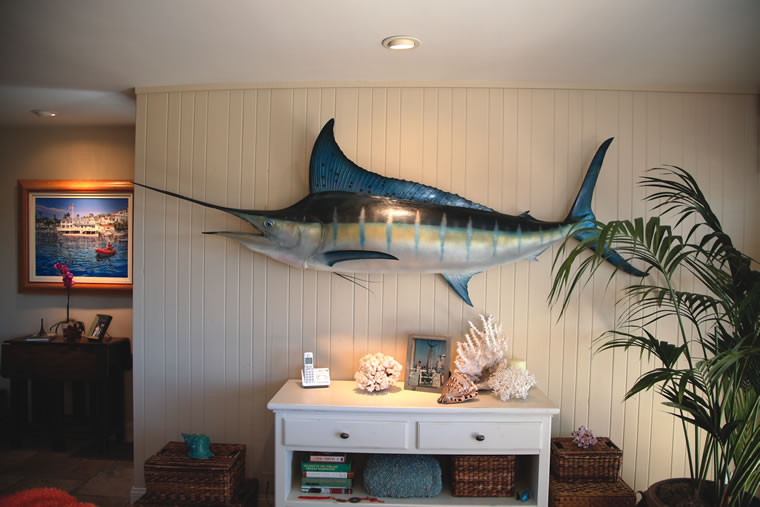 The main level’s “butterfly bathroom” was left untouched and still has the original wallpaper. “My son, Alec, loved butterflies when he was little and we just never felt the need to change it,” Diane explains.

On the bottom floor, the den’s floor-to-ceiling entertainment center, cozy couches and travertine flooring add to the comfortable space, while a huge marlin hanging on the wall serves as conversation piece. “Our son caught the fish when he was 9 years old,” Steve says. “He weighed half of what it did at the time and set a record, so we decided to keep it. Alec named it Luigi.”

During the second renovation, the couple concentrated on the exterior of the house and put in a new roof, stucco and drought-tolerant landscaping. “Since we did that, we’ve saved more than 40 percent on our water bill,” Diane says.

“We love it up here,” Steve adds. “… We’ve finally gotten our house the way we want it and we aren’t going anywhere anytime soon.” 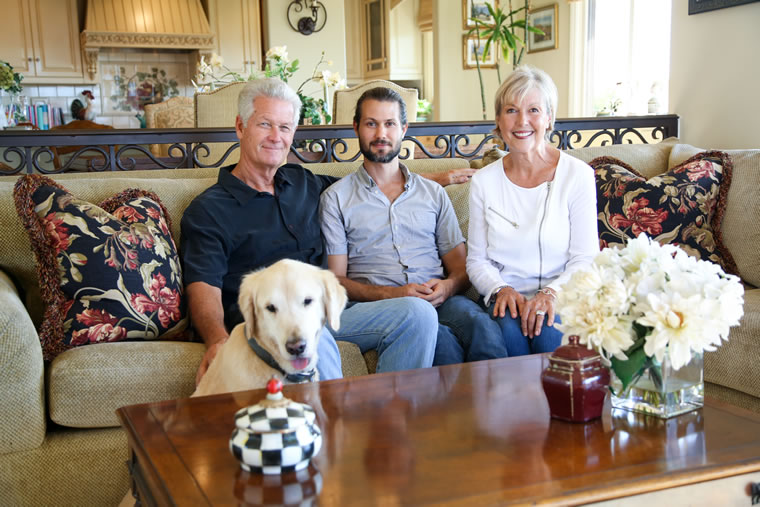 DAY JOB: Steve is a mortgage banker and Diane is retired.

FABULOUS FEATURE: The open floor plan kitchen and living room on the top level is a perfect space to entertain. 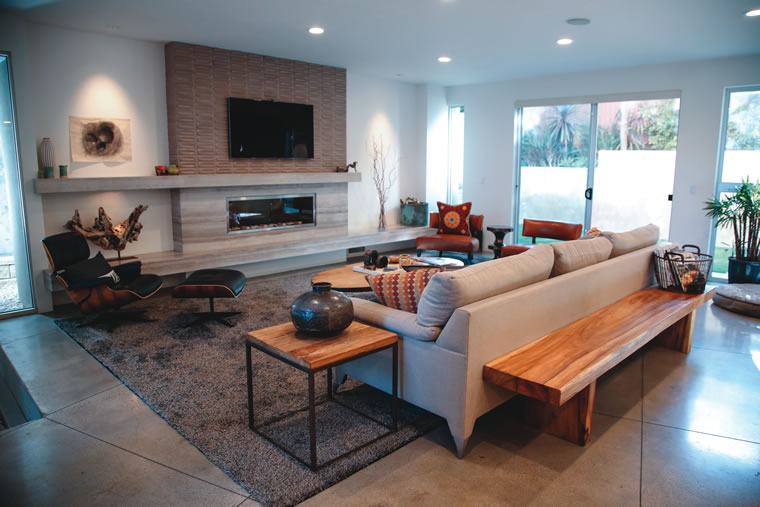 The Britt family moved to Laguna Beach from a nearby town and found the neighborhood of Arch Beach Heights to be right up their alley. “We love it here—it’s a close-knit community where everyone knows and looks after each other,” Steve Britt says.

“As the second owners of this home, we moved into it when it was already livable,” Lisa Britt explains. “We’ve been able to take our time and make the changes we want little by little.”

The contemporary, concrete home sits on a large lot and boasts a tall fern and an abstract granite water feature in the entryway, both surrounded by river rocks.

A playroom with toys and games is near the entryway—separate from the living room, but still within earshot. The living area brings the concrete aesthetic into the flooring, which is covered with a soft, gray rug. A sandstone hearth and fireplace dominate the wall in front of a couch large enough for the entire family.

“Eventually, we want to make everything modern,” Lisa says. “We’ve started to soften the hard lines of the house by adding grays and earth tones to the decor.” 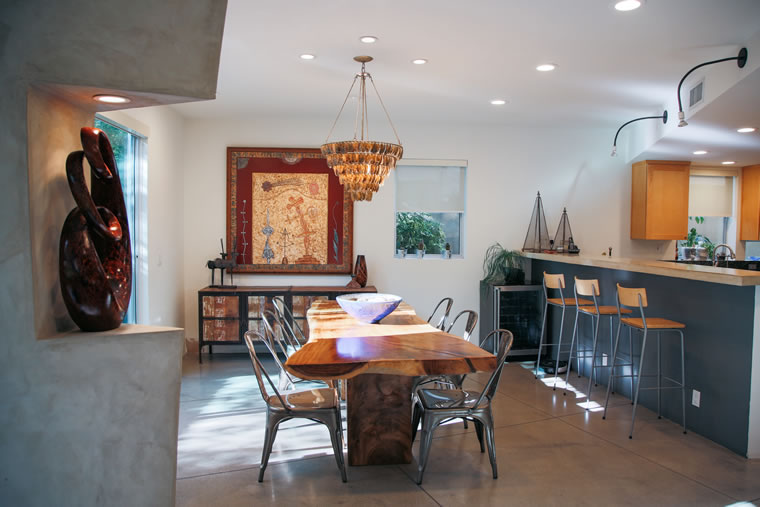 A large, reclaimed wood dining table sits to the far side of the room and matches the wooden bench sitting behind the couch. The kitchen finishes the space with maple cabinets, Viking appliances, black marble countertops and a stainless steel butcher block island.

Immediately upstairs, a built-in, two-tone office area displays family photos and offers space for the family computer. A Jack-and-Jill bathroom connects the boys’ bedrooms, which are decorated to fit each personality. One of the boys’ bedrooms shares a balcony with the master, offering views overlooking the park.

“The walls of this house have some crazy angles—that was the design style in the ’90s,” Steve says. “We’re definitely going to make some changes, but we like to take our time and make our choices wisely.”

Outside, the yard features a lava rock and glass fire pit surrounded by ample seating. The couple originally installed artificial grass to deter Patches from rolling in the mud. “The ‘grass’ has been great during this drought—we love it.” Steve says.

“A lot of thought went into moving to this area,” Lisa says. “And we’re very happy with where we landed.” 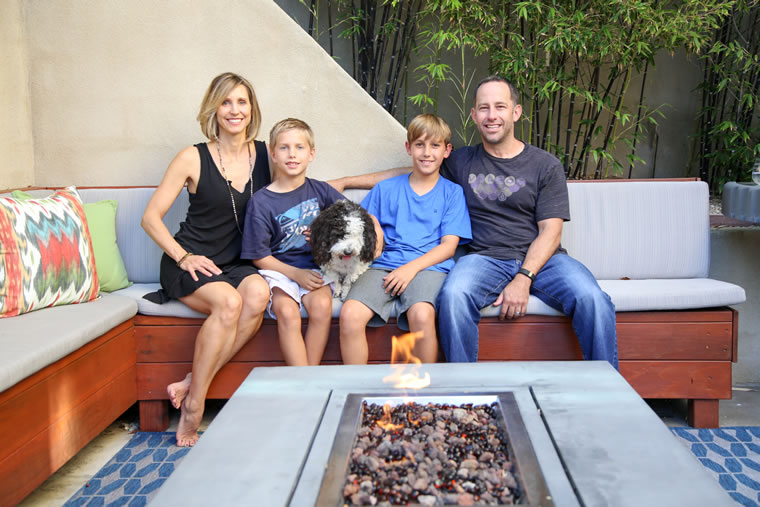 FABULOUS FEATURE: The open floor plan of the home allows the family to spend their time together, no matter what room they are in or floor they are on.

—Written by Tanya A. Yacina | Photos by Jody Tiongco 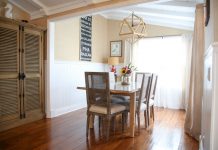