A restaurant resource for dining out in Laguna Beach 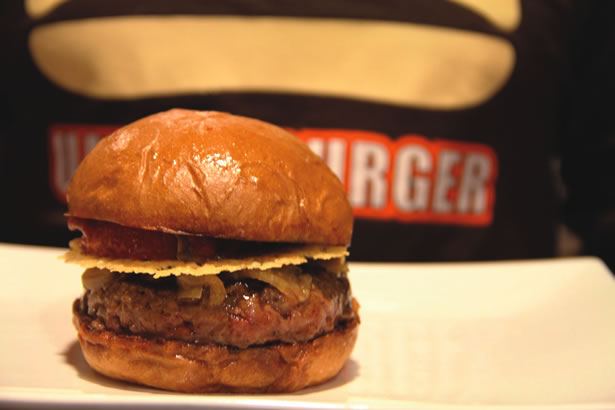 Umami is a mysterious fifth piece of the taste bud puzzle, a flavor component never readily associated with sweet, sour, bitter or salty—yet always right on the tip of the tongue. However, Umami Burger aims to be on the tip of everyone’s tongue as it opens up shop in Laguna Beach—their burgers already known for satisfying the taste buds of many an Angeleno up the freeway.
The focus of their restaurants is on quality and freshness of ingredients, with house-ground meat and fresh baked bread leading the way for a prime, gourmet burger experience. Having recently won “Burger of the Year” in GQ, the newest Umami Burger will open up at 610 N. Coast Hwy., and will feature a nautical theme to complement its full arsenal of burgers, sides and drinks.
Locals can start reveling in the sweet (or is it savory?) umami-ness starting in early 2012. (umamiburger.com)

A Taste of India Arrives in Crystal Cove 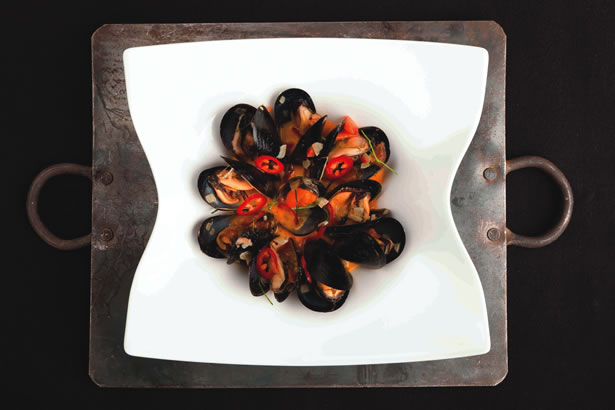 Famous in London for quite some time now, Tamarind now joins the rarified culinary air of Crystal Cove, and aims to share its northwest Indian favorites with Southern California’s hungry beachside diners.
Recognized by the illustrious Michelin Guide with a star for over a decade, Tamarind of London aims to duplicate its success in Orange County by utilizing locally sourced ingredients and building upon its eclectic small plate menu.
“Our U.S. culinary team, headed by Indian born Chef Shachi Mehra, has been working closely with Executive Chef Alfred Prasad, whose 11-year Michelin Star legacy at Tamarind in the UK has set the standard for elevated Indian dining.” says Maneesh Rawat, general manager of the new location.
Diners will be welcomed by three large, authentic tandoor ovens and an action-packed, open kitchen.
The new location brings crossover treats that weave their flavors between Indian and American, including scallops, calamari, chicken tikka, all sorts of kebabs and coconut steamed mussels.
Better make those reservations pronto. (7862 E. Coast Hwy.; 949-715-8338; tamarindoflondon.com) 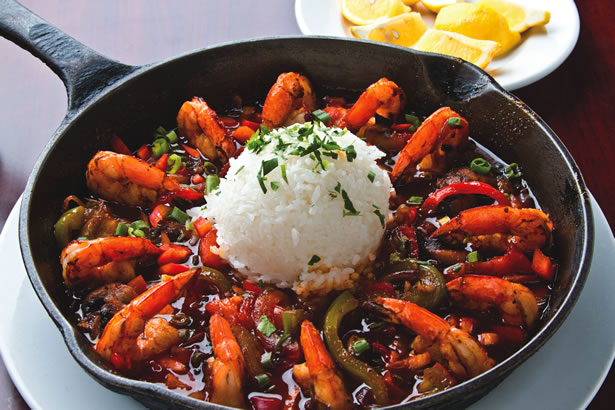 Rock’N Fish recently introduced a new lunch series for its midday diners, allowing them to enjoy a three-part meal for a great price. For just $12.95, “Ready Set Lunch” includes a choice of soup or salad, an entrée with a side and a refreshing beverage from the bar—which includes patron’s choice of wine, beer or house specialty Navy Grog. The menu encompasses a wide variety of land, sea and garden offerings, including fish and chips, a pulled pork sandwich and a fresh wedge salad, to name a few. The menu is ideal for those with limited time, looking for a hearty, budget-conscious lunch at one of Laguna’s premier seafood houses. This specialty menu is available during the week from 11:30 a.m. – 4 p.m., and allows loyal return customers the chance to order a different combination each time they sit down for lunch.
In addition, Rock’N Fish is also introducing prime rib Sundays. For $24.95 diners will get to choose between a soup or salad to go with their prime rib and dessert. (422 S. Coast Hwy.; 949-497-3113; rocknfishlb.com)

Gourmands take heart, the former Sorrento Grille, now 370 Common, is a new creation by the master madman in the kitchen, Ryan Adams, and promises to be a more fun, let’s-get-cozy, communal dining experience.
With a world of varying kitchen experience under his apron, Ryan aims to challenge and change typical interpretations of a night out for dinner by presenting his local, seasonal cuisine in a uniquely engaging setting. His meat and seafood classics are prepared and served in a vibrant environment that puts diners in friendly, spoken-word proximity with each other—encouraging strangers to leap the hurdles of unfamiliarity and find common joy together in a memorable surrounding.  Sharing stories and scallops is the ideal way to make new friends, and here’s how to do it at home in 370 Common style.

Seared scallops with spicy maple bacon vinaigrette and Brussels sprout gratin:
12 dry large (U-10) scallops
¼ cup grapeseed oil
4 slices nitrite-free smoked bacon (cooked)
2 teaspoons finely chopped parsley
Kosher salt and freshly ground pepper
Spicy maple bacon vinaigrette (recipe follows)
Brussels sprout gratin (recipe follows)
Method: Pat the scallops dry and season with salt and pepper. Heat a large sauté pan over medium-high heat. When hot, add the oil to the pan and carefully place the scallops into the sauté pan, searing evenly on both sides, about three minutes, until medium-rare. Transfer scallops to a plate and keep warm. To serve, spoon some Brussels sprout gratin slightly off-center on each plate. Line the front of the gratin with three scallops. Spoon the spicy maple bacon vinaigrette around the scallops and then lay a bacon strip atop the gratin. Garnish with the chopped parsley and serve immediately.

Spicy maple bacon vinaigrette:
¼ cup nitrite-free smoked bacon, finely diced
½ cup water
1 cup sherry vinegar
¼ cup maple syrup
¼ cup grapeseed oil
1 teaspoon crushed red pepper flakes
Method: In a stainless steel pot, combine the bacon and water, and place over medium heat. Cook until the water has evaporated, then reduce heat to low and continue to cook until the bacon is crisp. When done, deglaze with the vinegar and reduce by a third. Add the remaining ingredients and simmer for five minutes. Keep warm until ready to serve.

Brussels sprouts gratin:
1 stick (4 ounces) unsalted butter
2 tablespoons minced shallot
1 tablespoon minced garlic
1 cup minced onion
½ cup flour
4 cups whole milk
2 pounds Brussels sprout, stemmed and quartered
½ tablespoon kosher salt
1 cup grated Parmesan
1 cup bread crumbs
Method: Preheat oven to 375° F. In a stainless steel pot, add the butter, shallots, garlic and onion, then cook over low heat, sweating the vegetables until soft. Add the flour and cook for five minutes. Then whisk in the milk and continue whisking until the mixture is free of any lumps. Stir in the Brussels sprouts, season with salt to taste and cook 10 minutes at a low simmer. Stir in ½ cup of the Parmesan and transfer the mixture to a greased baking dish. Top with the breadcrumbs and remaining Parmesan, and cover with foil. Place the baking dish into oven and bake covered for 20 minutes. Remove the foil and bake uncovered for an additional 5 minutes, until the top is golden brown.
Courtesy of Chef Ryan Adams, 370 Common (370 Glenneyre St.; 949-494-8686; 370common.com). 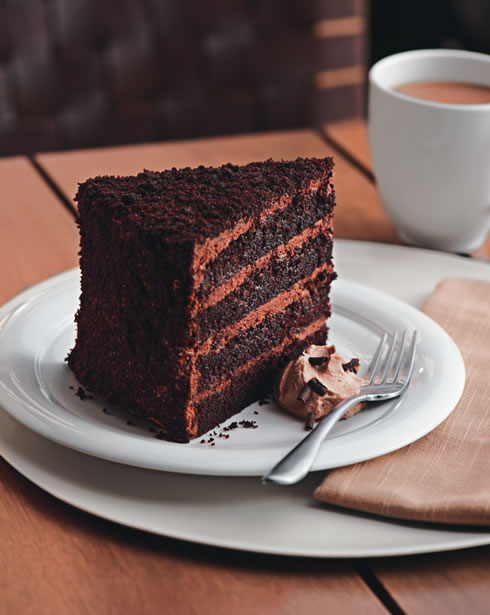 Method: Use a double boiler to melt chocolate together until no lumps (110 – 112 degrees), and slowly add butter to chocolate. In a small mixer with whip attachment add all of the powdered sugar and all of the sour cream at once and whip on high speed until incorporated, about two minutes. Add chocolate mixture to the sour cream mixture, and whip until lighter brown (milk chocolate color) for about four minutes. Refrigerate frosting for 20 – 30 minutes while cutting the layers of cake so it firms up. It should be around 60 degrees when building the cakes.

Cake assembly: Take cooled cake out of pans, then invert cake on cutting board with the top of the cake facing upwards. Gently slice cake with ¾ inch cake cutter. When finished cutting the layers, trim them all so they are the same size. Reserve all cake trimmings and place in food processor and pulse until coarse. Place on sheet pan and put into oven to dry out and reserve for later. Place 12 ounces of frosting onto each layer, spread evenly. Repeat for each of the three layers. Place 24 ounces of frosting onto top and sides, spread evenly. Add dried out cake trimming around top and sides then place into refrigerator.

Add:  all ingredients to mixing bowl and whisk together, then transfer to mixer with whip attachment and whip cream until thoroughly mixed. 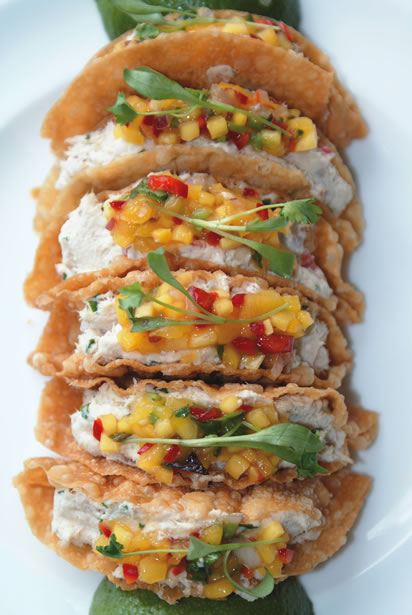 Raya at the Ritz-Carlton Laguna Niguel offers a weekly experience to challenge and excite the taste buds of Taco Tuesday lovers.

Maybe it’s chunks of freshly prepared lobster served in black bean puree, chile de arbol salsa, cilantro and avocado. Or maybe it’s the surprise of Korean fried chicken with dragon sauce, kimchee and a lettuce cup, or perhaps it’s thick and juicy smoked swordfish in a freshly warmed tortilla—regardless of whatever’s inside the taco, the ever-changing menu that chefs Richard Sandoval and Marissa Gerlach of Raya roll out each Tuesday offers something delectable for taco lovers.
Raya takes the fun of taco Tuesday and imparts its own distinct flavor on the great SoCal tradition, as unexpected culinary surprises greet diners that come in for the always-fresh weekly specials. Tacos are $4 each, and are best devoured by the plateful—from 6 – 9 p.m. each Tuesday. (One Ritz-Carlton Dr.; 949-240-2000; ritzcarlton.com/raya) 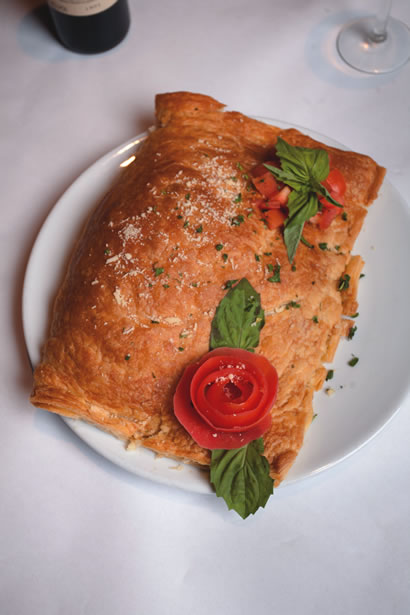 Enjoy a savory Italian main dish from Romeo Cucina. Find out how Jack Daniels finds its way into the tempting Italian dish.

Method: Cook pasta in boiling water for about six minutes and drain, do not blanch. In a large pan, sauté garlic with extra virgin olive oil, add all the vegetables (except sundried tomatoes), and cook until golden brown. Add salt, pepper and Jack Daniels, let simmer for about two minutes. Add cream, tomato sauce and sundried tomatoes, a pinch of salt and black pepper. Add rigatoni and reduce the sauce until gets a pink color. In a large oiled baking pan, lay the puff pastry and add filling to half, then fold over the other half of the pastry and press with a fork all around to seal it. Bake it in a preheated oven at 400 degrees for about 35 minutes, until the pastry gets golden and crispy. Place on a serving plate and sprinkle Parmesan, diced tomatoes and basil leaves.
Courtesy of Romeo Cucina (249 Broadway St; 949-497-6627; romeocucina.com).

High Taste From the Low Country

Skewer up some shrimp for an easy and flavorful appetizer. Country ham, bourbon, mustard and brown sugar flavor these simple and delicious skewers from The House of Big Fish & Ice Cold Beer. 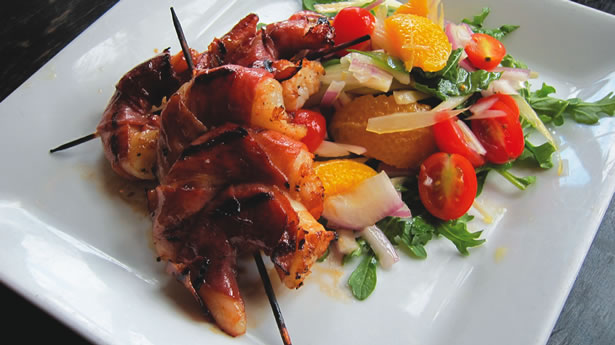 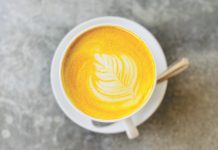