Exchange your indoor workout routine for adventures in nature.

Let’s face it; the gym can be hectic. Waiting in line for the elliptical, packing into the Pilates classroom and disinfecting the backrest of the weight machine: It isn’t exactly a soulful approach to getting your sweat on. Yet, between work, family and everything else, sometimes it’s the only way to get the exercise needed to maintain your health. Of course, if you had your druthers, wouldn’t you rather be running a trail in Laguna Canyon instead of heading nowhere on a treadmill, or practicing yoga on the water rather than atop a mat? Outside equivalents of indoor workouts are just as effective—if not more so—but unlike their inside counterparts, they provide equal benefits for both body and mind.

Paddle Out to Sea

Stand-up paddleboarding is all the rage. Peer out onto the ocean any day of the week and you’re bound to see solo paddlers traveling across the Pacific. But one of the most intriguing aspects of this new sport is SUP yoga, where the traditional practice—typically done on a mat spread atop a hardwood floor in a trendy indoor space—is modified so it can be accomplished on wide, stable stand-up boards on the ocean.

Taylor Chaput runs Bliss Paddle Yoga, which specializes in this new option. She escorts groups from Laguna Beach’s Divers Cove and guides them out to Seal Rock or in front of Main Beach, where the participants tie off their boards on kelp to stay together with the instructor. Taylor, or one of her hired guides, then takes the class through a series of poses specifically modified for SUP.

Traditional yoga seeks to connect practitioners with mind, body and spirit. “Our mantra is, ‘Look inward to the sea,’ ” Taylor says. “Our classes are one-and-a-half hours and really accessible to people who haven’t paddled, or done yoga. We use these elements to connect people to nature: we see tons of wildlife like sea lions, whales and dolphins, which really adds to the adventure.”

For first-timers, Taylor says the experience is enhanced with a professional. Many feel more at ease alongside an instructor, allowing them to get the most out of the practice. “Going out in the ocean, or any body of water, you see deeper within yourself,” she says. “People are often a little scared or intimidated. But once they paddle out, there’s a transformation from fear to joy or bliss and relaxation.” (949-529-4242; paddleboardbliss.com)

A Natural Fit: The reason SUP and yoga go hand-in-hand? Both are centered on building core strength as each utilizes the large muscles in the center of your body.

There’s something a bit depressing about the hum of a treadmill and the rhythm of tennis shoes continuously pounding against the rubber roller. Maybe it’s the analogies to corporate America and the life that, deep down, we’re all trying to avoid. Or maybe it’s just the fact that those sneakers on your feet were probably made to be outside, exploring a trail instead of falling monotonously on a machine.

And that’s what Virginia Crowe is all about. For a decade, she’s guided new trail runners through the hills surrounding Laguna Beach, teaching them to utilize the natural shape of their bodies to run safely.

“That’s what trail running is really about: technique,” she says. “I come from a CrossFit background so we build endurance. You don’t want to train up to 26 miles for a marathon. You want to build with progression. So we incorporate pose running, which is natural running technique built off the way the body was designed to absorb impact. We try to get people off their heels, which is really bad for your body.”

Now entrenched in full-time fitness work at a gym, Virginia still retreats to the trails to teach weekend warriors. Approaching each class differently, she’ll work with her student on running uphill during the first session, for example, followed by a focus on downhill training in the next session, and then she transitions so runners can work on progression.

Virginia’s favorite running locale is Top of the World, out of Laguna Canyon. She starts there, runs the Ridgeline Trail and combines it with Mathis, Dripping Cave and a few others for a 5-mile loop.

But life is spicier with variety: Mix it up with the options available up and down the Laguna coastline. For example, Laguna Coast Wilderness Park features 40 miles of trails. Once you try them, you might never tread on the mill again. (foreverfitt.com)

Melt Calories: According to Health Magazine, trail running can increase your calorie burn by up to 10 percent because you’re running on uneven terrain, and it’s usually gentler than pavement on your bones and joints.

Swim in the Open Ocean

Swimming is one of the best full-body workouts available at the gym. But chlorine, fees and scheduling lap times can make an aquatics center unappealing. The open ocean, on the other hand, is free, saltwater is cleansing to the soul and the only schedules you’re working on are your own and Mother Nature’s.

Lynn Kubasek is one of the area’s most dedicated open ocean swimmers. A lifetime fan of the sport, she’s completed the Catalina Channel solo and, two summers ago, she and a friend took an aquatic tour of California, swimming each pier in the state including the Channel Islands. “The wildlife, the adventure, you never know what you’re going to see,” she says. “The conditions are always different. I was out with a friend the other day just after sunset, the moon was above us and the … [bioluminescent plankton] were incredible.”

Lynn says there are several safe places to try open water swimming if you’re ready to switch it up from the pool.

“Shaw’s Cove is pretty safe and tends not to get waves, just shore-break so you have to time it,” she says. “You can swim out to the buoy and back. For a longer swim, try Oak Street to Main Beach and back. That stretch is all sandy and makes for an easy exit if you or someone you’re with wants to get out.”

Added Benefit: Saltwater is a natural cure-all as the sodium chloride can help with acne and do wonders to heal mild scars

Cycle Through the Hills

One look at the mountainous terrain surrounding Laguna Beach makes toiling away on a stationary bike in the gym feel uninspiring. The city has a rich history of mountain biking, both cross-country (climbing and traversing terrain) and downhill, and there are plenty of resources in town to glean knowledge; mountain biking, like most outdoor pursuits, requires a bit of planning for the most enjoyable experience.

“We preach to people to know the area, get yourself oriented [and] have a map,” says Arin Brandeis-McGunigle with Laguna Beach Cyclery. “I was just out mountain biking the other day and came upon a woman—who was hiking, not biking—but she was lost and I had to walk her out of the park for a mile. It’s an awesome alternative to exercising in a gym, but be prepared. Know the area, know how much water you’re going to need.”

One of the most intimidating factors for new entrants to the sport is finding the right bike. That’s why Arin suggests renting. Most shops like the Cyclery rent bikes from low-end, introductory rides all the way up to the most expensive equipment available, allowing you to sample a variety and get an idea of what works best for you and how to use it. When you’re ready to invest, the store offers some of the best brands around, in addition to specializing in custom builds.

And biking out of Laguna Beach is easy; trails abound for cyclers of all experience levels. Beginners will want to try Crystal Cove State Park, just north of town.

“There’s a loop around Crystal Cove that’s beginner-friendly,” Arin says. “You gain 1,800 feet on the loop but the trails are fire roads and ideal for first-timers. You can walk any steep spots and it’s easy to not get lost.” (949-494-1522; lagunabeachcyclery.com)

Work More Muscles: A study by the American Council on Exercise (ACE) found that an indoor spin class helps maintain 75 to 96 percent of your maximum heart rate. However, because of a lack of wind resistance and terrain changes that work different muscles, most stationary bikes primarily benefit hamstrings and can therefore lead to disproportionate development. 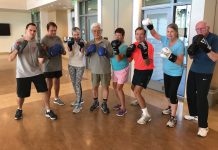