Lined with beaches, boutiques, galleries, resorts and restaurants, Woods Cove is a neighborhood that has it all– By Laura Gosselin | Illustration by Ken Harris | Photos by Jody Tiongco 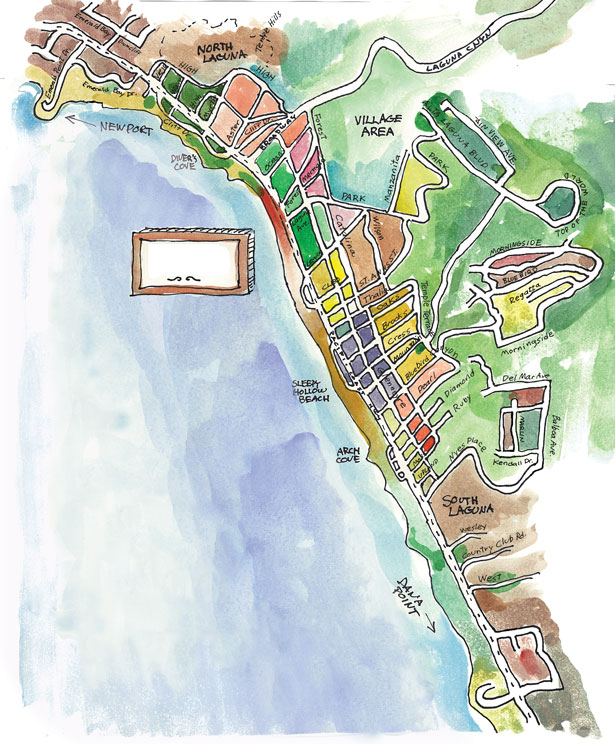 Brimming with character, Woods Cove is located in the heart of Laguna Beach and encapsulates all the charm this seaside town is famous for. With home styles varying from delightful cottages to beachside estates and condos dotted in between, the diversity of the homes in Woods Cove gives this neighborhood both Old World charm and contemporary elegance.

Home to Bette Davis’ 1929 English Tudor oceanfront home where the Hollywood legend lived in the 1940s, Woods Cove has spectacular ocean coves with a rural twist. Today, residents of Woods Cove love the walkability of the neighborhood—with all the amenities and amazing beaches just a stroll away.

Resident Cherlyn Brown explains, “It’s a hidden gem that is just far away enough from the tourists, yet still within walking distance to town.”

Aptly named for the many beautiful trees in the neighborhood and the majestic cove that hugs the Pacific Ocean, Woods Cove boasts the village charm of local shops, restaurants and boutiques, making this neighborhood of Laguna Beach one that absolutely has it all. 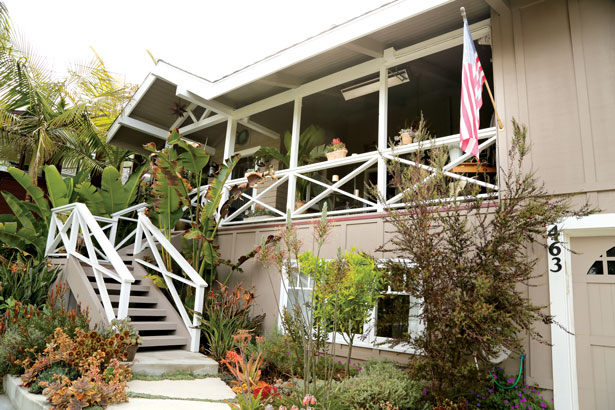 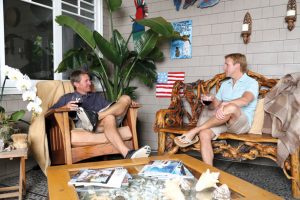 On the south side of Bluebird Canyon Drive at the edge of Woods Cove, David Gibson and Anthony Higginbottom live in a 1928 craftsman cottage. The house was added onto in the 1950s, with owners at the time giving the small cottage a garage, second bedroom and bath, as well as an expanded front porch.

Prior to David and Anthony moving into the house in 2005, the house received another major renovation to integrate the 1928 design and the 1950s addition. Laguna architect Tim Nicol was brought onto the project, and he enhanced the original craftsman beachside cottage aesthetic of the home. When David and Anthony later moved in, they loved the work that Tim had done, but needed more space, especially since they love to entertain.

David explains, “While the home looked large from the street, it was still only a two-bedroom home. So, in 2010 we brought Tim back and embarked on a project to convert the dirt space under the house into livable space. Due to the slope of the land and without expanding the footprint of the house, we were able to add a third bedroom, large bath, family room, wine cellar and laundry room all below the house.” 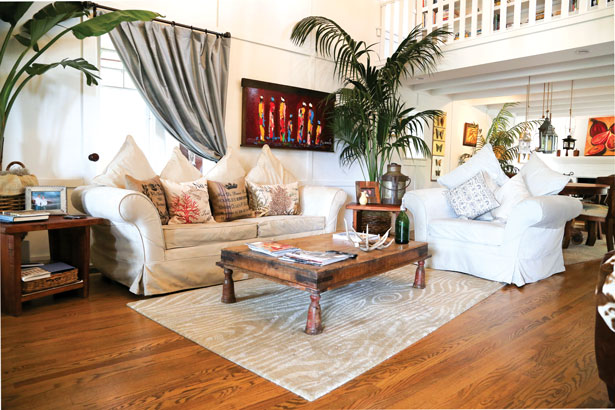 During the renovation, the couple managed to unearth an old safe from 1910 that belonged to a former longtime owner of the house, Steve Wolf, a jeweler who had a workshop in the space below the front porch. The safe, which was found empty after Steve visited and remembered the combination for David and Anthony, was cleaned up and now stands as a cool feature in the family room. But one of the couple’s favorite parts of the renovation was the addition of the large front porch, which is covered and heated so they can enjoy the space year-round.

“It’s a great way to be social and stay connected with our neighbors because we spend time in the front of the house, rather than sequestered in the back away from everyone,” David says. “The porch sits up high and we can enjoy views of the hills and sunset. It’s decorated in an eclectic style of nautical fishing lodge cabin and folk art that we acquired while living in Atlanta.”

DAY JOB: David works for Irvine-based Allergan and is the head of professional relations for optometry; Anthony works for Deloitte Consulting as an executive in mergers and acquisitions consulting. SPACE: 2,500 square feet, three bedrooms, 3.5 baths. HOUSE TIMELINE: Built 1928, renovations in 1958 and 2010, purchased in 2005. FABULOUS FEATURE: the glass floor in the kitchen, which looks down into a large stone wine cellar below. Many people get nervous walking over the glass floor at first. Ladies should be warned that during parties, some men like to stand in the wine cellar and look up! 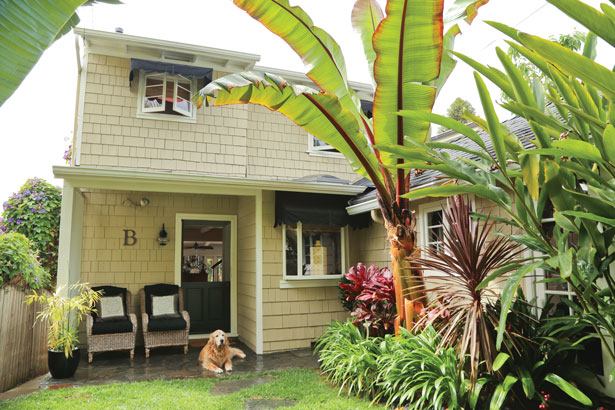 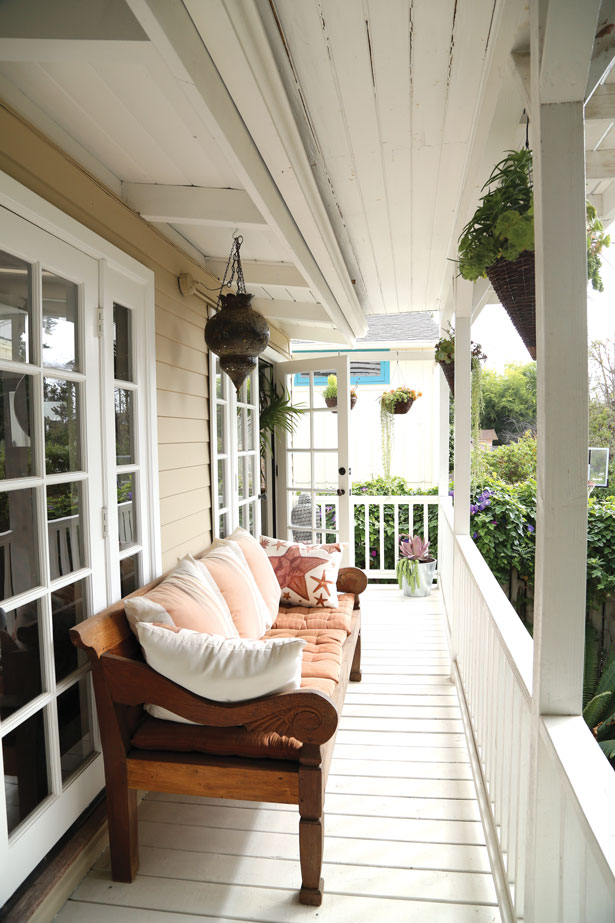 Neighbors to David and Anthony, the Brown family lives in a charming 1940s cottage just two blocks from the beach. The tri-level cottage backs up to Bluebird Canyon with great views from both upper and middle decks. The Browns have kept the original footprint of the home intact but have made some renovations, which include updating the kitchen while keeping the original classic cottage feel, incorporating wrought-iron staircases and converting a basement into a cozy theater room.

Cherlyn says that her home is special to her because it was this house to which she and her husband Matthew brought their newborn daughter, Brianna.

“Bringing our one and only child home three months after we purchased this house and watching her grow up enjoying the many rewards of living within Woods Cove has been priceless,” she says.

One of the family’s favorite features of the home are the multiple decks that overlook the lush vegetation Woods Cove offers, which is reflective of their “eclectic tropical” decorating style inside. The home, which boasts amazing canyon views from each deck, has that panoramic “wow” factor, but still maintains a cozy cottage feel. The location of the home—in that it’s within walking distance to both the beach and village—is also one feature, especially during the busy summer months, that makes their Laguna Beach cottage absolutely perfect.

Meanwhile, 11-year-old Brianna can’t live without the home theater, which includes a 50-inch flat screen television outfitted with surround sound. The screen is perfectly situated for viewing from the wrap-around couch for casual, family-styled seating where she and her family have spent many cozy evenings curled up with a large bowl of popcorn. 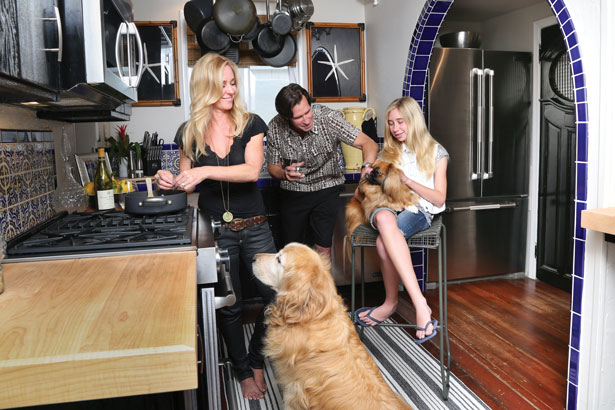 Cabin By the Sea 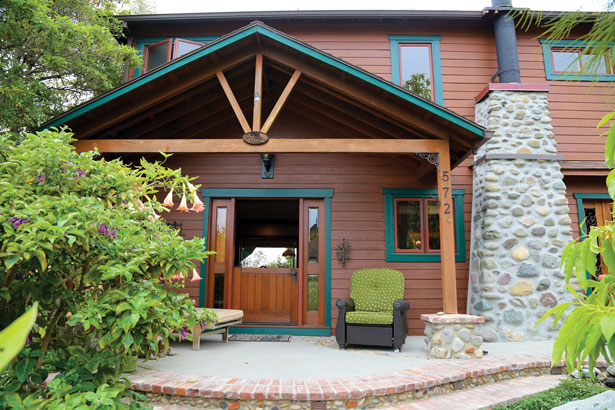 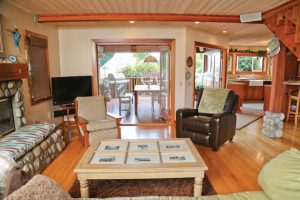 Shelley and Kelly Arends’ 1926 craftsman cottage was just 800 square feet and in dire need of some TLC when they decided to buy it in 1988. Living in the home in its original condition until they could renovate in 1993 was no easy feat, but as the saying goes—anything worth doing isn’t easy.

Inspired by the 80-year-old Monterey Pine that once stretched its way across the street, the Arends wanted a woodsy feel and so reused all of the old wood from the original house for the trim around the windows, keeping as much of the “old” as possible to maintain the rustic look.

“Laguna is such a wonderful place to live, so when we designed our home, we wanted to bring the outdoors in,” Shelley explains.

To achieve this whimsical look, the Arends have been continually personalizing their home, most recently adding a stream to the front yard that compliments the home’s original stone chimney. More expressive touches, such as the stained glass window featuring a wave, added ample character. An outdoorsy family man, Kelly especially loves the combination of wood and stone used in the house and seating area by the front stream. Most mornings, Zane, the younger of Shelley and Kelly’s two sons, can often be found drinking in the morning sun from the front porch.

The heart of the 1,800-square-foot home is in the great room downstairs, which includes the kitchen, living room, formal and informal dining areas and vaulted ceilings. Two river rock fireplaces compliment the great room, the original 1926 fireplace in the dining area and the newer one in the living room.

“My children were raised in this house,” Shelley says. “They know no other neighborhood than Woods Cove, which to me, feels like storybook land. The houses are all charming. I love that everyone walks the neighborhood. Everyone knows everyone; we have many potlucks and gatherings and celebrations of children graduating, getting engaged and even married.”  LBM 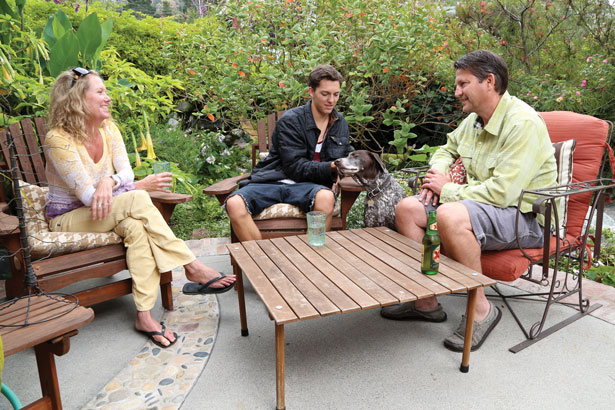