Residents of central Temple Hills spend their days overlooking the quaint village of Laguna Beach and the rich blue waters of the never-ending Pacific. –By Laura Gosselin | Illustration by Ken Harris 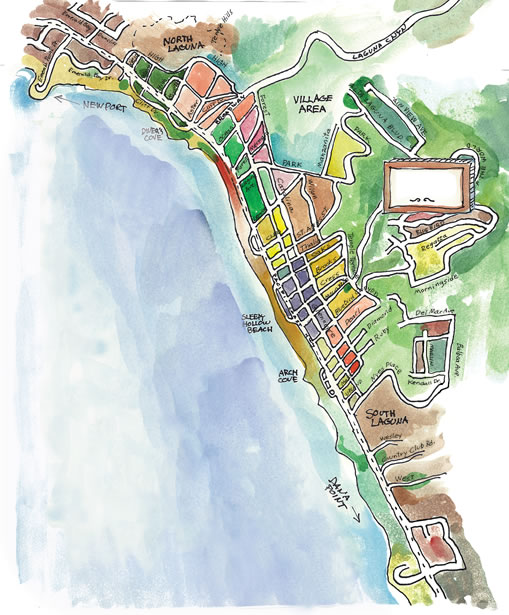 The winding canyons of Laguna Beach are distinctly Laguna—cliff-side roads overlooking the great Pacific with hidden mansions modestly shrouded by brush. The central Temple Hills community is located above the heart of Laguna Village, perched atop rolling hills with the magnificent ocean below, making for panoramic sunset views. The typically larger homes of this sought-after neighborhood are an eclectic mix of architecturally unique Craftsman cottages, modern mansions and Mediterranean-style villas. 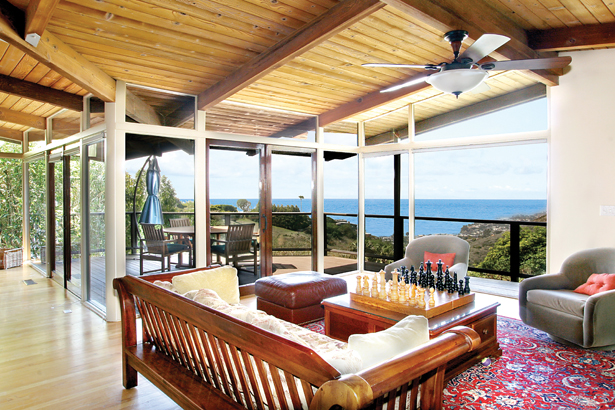 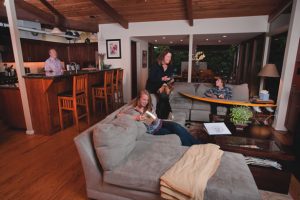 When she was 7 years old, Lisa Ansell, who at that time lived in the Laguna village area, would spend afternoons on San Remo Drive off Temple Hill playing with her best friend Kathy along with the many other children who lived there in the early 1970s. Little did she know that she would meet her future husband, Tim Black, at Kathy’s house some 23 years later and that by happenstance, they would purchase the house next door.

Now, even though the Blacks have owned the house for 12 years, they are still the new kids on the block. Most of the Black’s closest neighbors have lived on San Remo for 35 years or more, as few families move away from San Remo Drive.

Built in 1962, the Black’s unusual home is a modern post-and-beam structure, which they have recently renovated. It is situated above a canyon with expansive views of waves crashing along Main Beach, Catalina Island and Laguna’s north coast. The 3,500-square-foot house has an Asian/Zen feel and has kept the original walls of glass, which allow for astounding ocean views from every major room in the house. The home is modern, open and warm, with exposed wood ceilings, expansive decks and a large patio entry.

Though the house has been renovated with many modern features, the true luxury is the quiet location and the beautiful views of the ocean, as well as the canyon below, which is a home to all sorts of wildlife, including deer, rabbits and the occasional bobcat.

“The street itself is very quiet, with plenty of parking and few of the hassles that many Laguna Beach residents have to deal with,” Tim Black explains. “The location is convenient to beaches, hiking and downtown. The street is also ideal for families, as it is very quiet and safe, and just a short distance from Top of the World Elementary School, Thurston Middle School and Laguna Beach High School.”

Although the inside of the home itself is spectacular, the Blacks make the most of their 2,000 square feet of outdoor space with ocean view decks and travertine tile patio space including a fire pit as well as a barbecue island.

FAMILY FACTS: TIM, LISA, CLAIRE (12), DANIEL (13), ABBY (A CAVALIER KING CHARLES SPANIEL) AND SASHA (A RESCUED BEAGLE/HUSKY). DAY JOB: Tim Black is an attorney who specializes in representing victims of serious personal injury and wrongful death and is a partner at Black & Machtinger LLP in Newport Beach. Lisa is an active mother and also helps Tim with his law practice. SPACE: 3,200 square feet; four bedrooms, three baths. HOUSE TIMELINE: Built 1962, purchased in 1999, remodeled in 2006. FABULOUS FEATURE: The walls of glass that look out to the ocean. 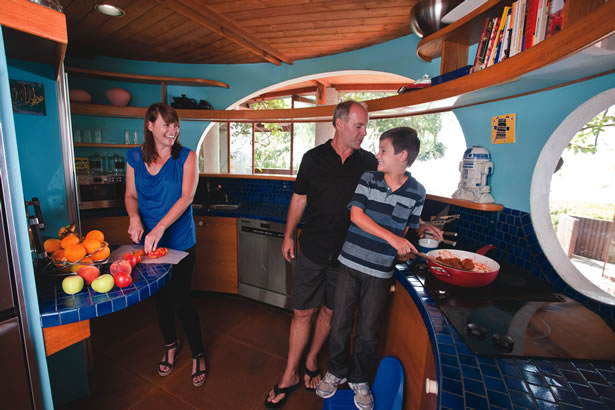 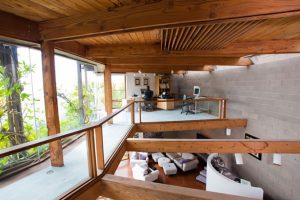 Just below the Blacks on Temple Hills Drive is a cool contemporary house designed by architect Lamont Langworthy, who told current owners Bruce and Ginger Virga that he sat on this hillside for days to get a feel for the property before he came up with the idea of building a round house. Lamont explained to the Virgas that this home is his tribute to the circle—and he believes that each of his projects has its own character—a blending of function and environment.

Built from bare bones after the original owners’ funding ran out, the property fell into the hands of another architect, Louis Wiehle. Louis bought the home, finished it and made it what it is today.

From there, everything is original, including the handcrafted front door and stairway. Bruce and Ginger Virga have called circular property home since moving there in 1993.

“This is our first house,” Bruce explains, “Ginger spent two years looking at everything available in Laguna before finding this house—it was love at first sight. We walked in, said ‘Wow’ and just bought it.

“Our 7-year-old son Vincent loves having a round bedroom, and I love my round kitchen,” he continues. “We love the view, the privacy and the seamless indoor-outdoor living, which is great for enjoying family and friends.”

According to Bruce, depending upon how you look at it, the house has between two and four bedrooms.

There’s a free-floating loft that could be a bedroom, which Ginger uses as her design studio, and there’s a room that the original owners used to sleep their four boys that the Virgas now use as their library.

The Virga family averted near-tragedy when, just six months after they bought their dream home, fires ravaged the Laguna canyons.

“We thought the house was going to burn,” Bruce recalls. “The fire was literally across the street when a plane dropped fire retardant and the wind shifted.”

FAMILY FACTS: BRUCE, GINGER AND VINCENT (7). DAY JOB: Bruce is a software executive, a culinary director, leader of the Zuni Riders (YMCA Adventure Guides), and a Laguna Beach Little League commissioner and board member; Ginger is a freelance designer and is active in the Community Learning Center (CLC) at Top of the World Elementary School. SPACE: 2,400 square feet. HOUSE TIMELINE: Built in 1962, purchased in 1993. FABULOUS FEATURE: Wildlife including deer, coyotes, bobcats, snakes, owls, raccoons, rabbits and hawks vultures right outside. 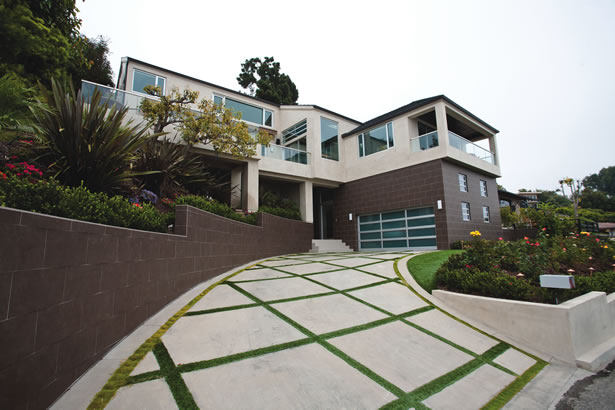 Brad and Stacy Barlow’s Canyon View Drive home is a modern eclectic house with breathtaking ocean views, high ceilings and generous light. Before the recent remodel, it was a French country home, but since then the Barlows have completely transformed the home into a warm, modern house. The rooms are open-concept in design, with a loft-like feel on the main living floor, while the walls of the family room and living rooms slide open for the duality of indoor-outdoor living.

Brad Barlow explains, “We bought the French country house because it had great bones, views, with a ton of light and space, knowing it would be really great after a remodel. Nothing was touched until we did a major remodel last year. We lived with a moldy kitchen, pink toilets and hideous wall-to-wall carpet (even in the bathrooms) for about four years. We purchased the home in 2005, moving from another Temple Hills home located on Temple Hills Drive. We had planned to remodel right away but then got pregnant with our third child, Addison. I always joked that we got a new baby instead of a new kitchen!”

Working with construction contractors Weeks and Falcone, the Barlows began their home remodel in 2009 and endured 13 months of construction. After interviewing three designers, Stacy decided to take on all the design work herself, making this their third Laguna Beach family home she has redesigned.

“I love the kitchen and great room area,” Stacy notes. “The Heath tile backsplash in the kitchen is one of my favorite design features in the house. I also love the blend of different styles in the house. We lived in a North Laguna cottage for years, and I have mixed some of that furniture with new modern pieces. Sometimes a modern home can look cold, but our home is eclectic and inviting. It is a fantastic family house.”

As for the kids, it seems like growing up in a beach town like Laguna can’t be beat.

“Kennedy and Benton love the proximity to Anita Street beach for the surfing, skimming and boogie boarding,” Stacy says. “They can be found in the waves most weekends.”

FAMILY FACTS: STACY, BRAD, KENNEDY (9), BENTON (7) and ADDISON (4). DAY JOB: Brad is a managing partner in a private equity firm. Stacy taught elementary school for eight years and is now a stay-at-home mom with a love for design who hopes to remodel another home in the near future. HOUSE TIMELINE: Built in 1979; bought 2005; remodeled in 2009. SPACE: 3,900 square feet with two large outdoor decks; four bedrooms, 3.5 baths. FABULOUS FEATURE: The kids love the low-ceiling playroom, a storage room that was turned it into a large playroom. LBM
Share this: