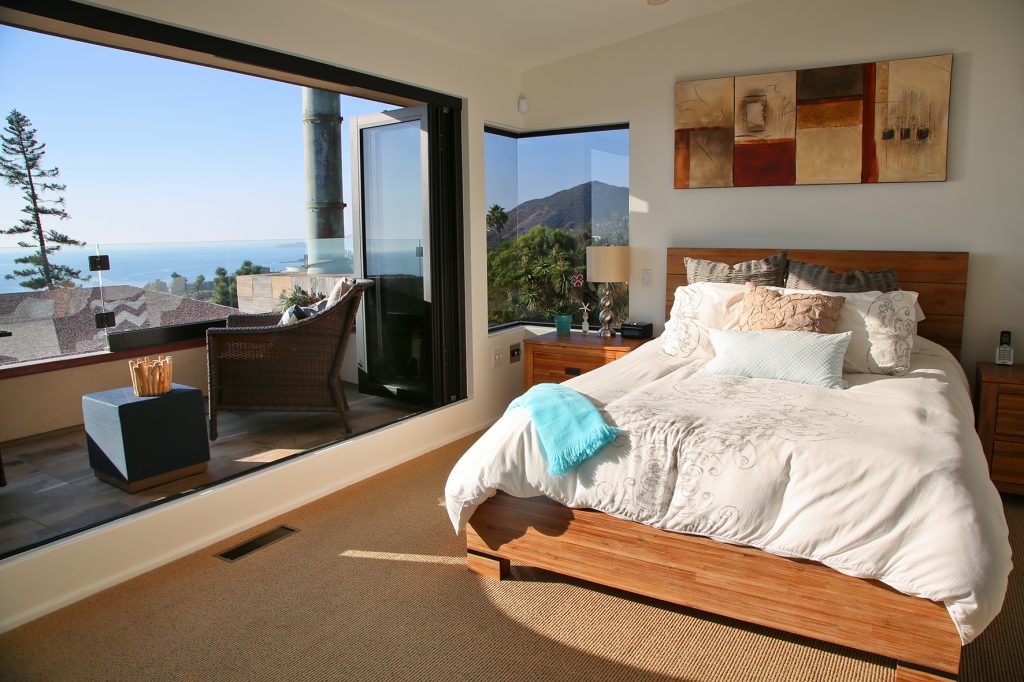 With relaxed beach houses and cottages, and breathtaking ocean views  at any time of day, Sunset Avenue is the place to be for families.

Just a stone’s throw away from Thousand Steps Beach and perched in the hills of south Laguna, the homes along Sunset Avenue are situated for enjoying glorious Pacific sunsets with panoramic views of Three Arch Bay and Catalina Island.

Dotted with residences in various architectural styles from contemporary beach houses to Mediterranean- and Cape Cod-style cottages, the road starts at Mar Vista Avenue, winds around Mission Hospital and ends at 11th Avenue to the east.

The neighborhood’s unique charm is what initially drew Sunset resident Cynthia Jenkins and her husband, Joe, in 2001, just as they were expecting their first child and planning to remodel their first home as a family. “South Laguna has a lot of old cottages that haven’t been remodeled yet, and that’s what we fell in love with,” Cynthia says.

But the friendly camaraderie with neighbors is the reason her family has stayed. “It’s very tightknit, which is common for Laguna,” she adds. “The houses are very close, and my kids’ best friends live next door. Everyone knows each other and looks out for one another here.” 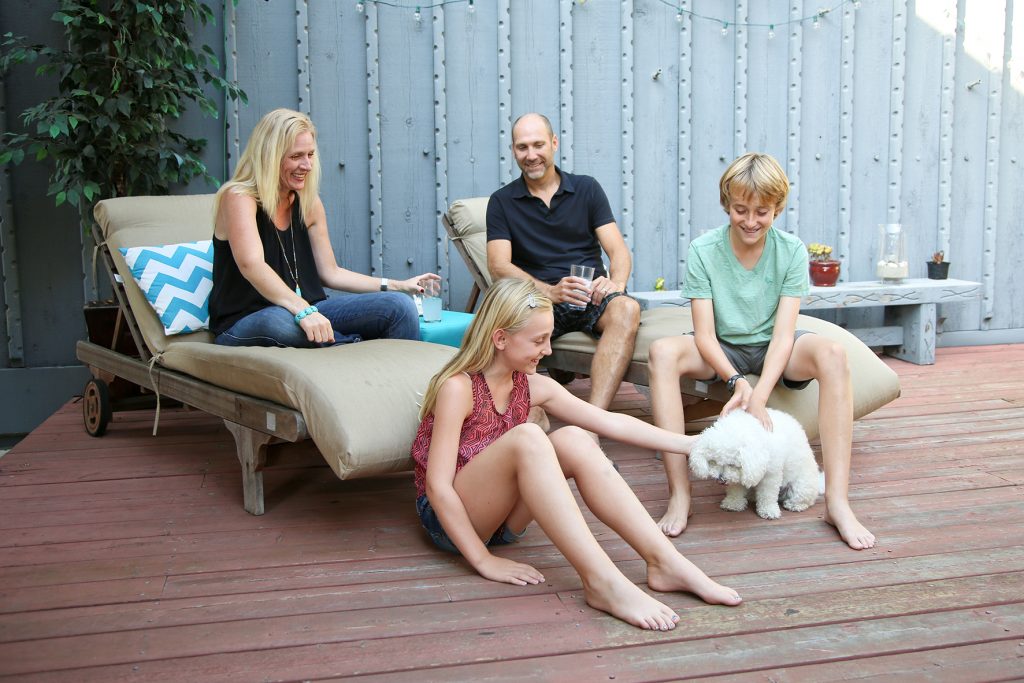 FABULOUS FEATURE: A bright and cheery kitchen with an antique Westwood stove

After living in Corona del Mar, Joe and Cynthia Jenkins finally made the move to Laguna, where they wanted to plant their roots.

“We rented until we could find a place in Laguna we could afford,” Cynthia explains. That home turned out to be a tiny, Arts and Crafts-style cottage on Sunset Avenue. A “total dump,” according to Cynthia, but it was a fixer-upper with potential and a rare, grandfathered-in, ocean-facing deck that made it a worthy investment.

They moved in while Cynthia was pregnant with the couple’s first son, Jackson, and began their remodel while she was expecting their second son, Benji. Joe, a general contractor, worked with Laguna-based Blazing Hammers Construction on the project. Just as they were getting started, however, Cynthia had a sudden change of heart in the new floor plan; she had a different vision and wanted to keep the remodel a bit more modest. 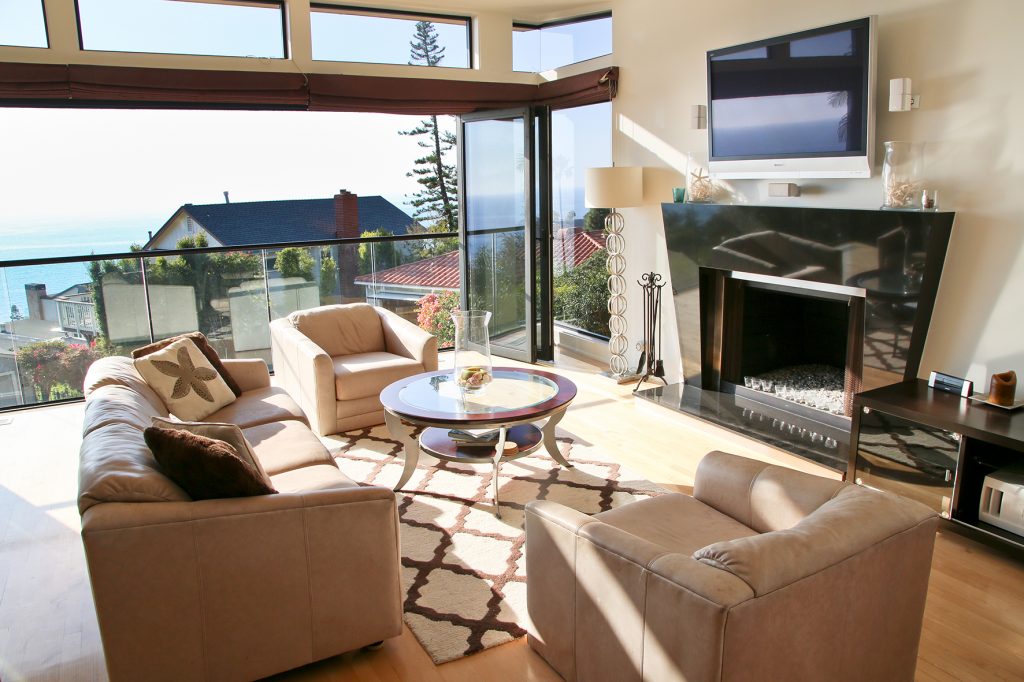 “A neighbor at the time had told us, ‘The bigger the house, the further apart you grow,’ and I always remembered that,” says Cynthia, who ultimately decided on keeping all of the rooms in the home on one floor. “I just wanted to make sure that we were all together.”

While the layout may have changed, the couple made it a point to preserve some of the home’s original details, such as the vaulted wood-beam ceilings and Philippine mahogany wall paneling. Additionally, bright accent colors not only complement the rich wood tones, but infuse the space with a sense of whimsy.

The colorful kitchen was redesigned with a vintage-meets-modern vibe. Front and center is the wood kitchen island and a row of vintage schoolhouse chairs in different hues, which create a cozy space for the family to eat side by side.

Bead-board cabinets were painted in a soft blue to evoke a cottage feel but take a minimalist twist by leaving out the hardware.

Other quirky details make the home uniquely theirs come courtesy of the Jenkins boys. Benji’s bedroom is painted a bright green, and Jackson chose a surf and wildlife theme. They also devised a bucket-on-a-rope pulley system to retrieve snacks from the kitchen while playing outside in their “jungly” backyard.

“We all have our own personalities rolled into [the home],” Cynthia says. “There’s not 1 inch of the house that’s not Jenkins.” 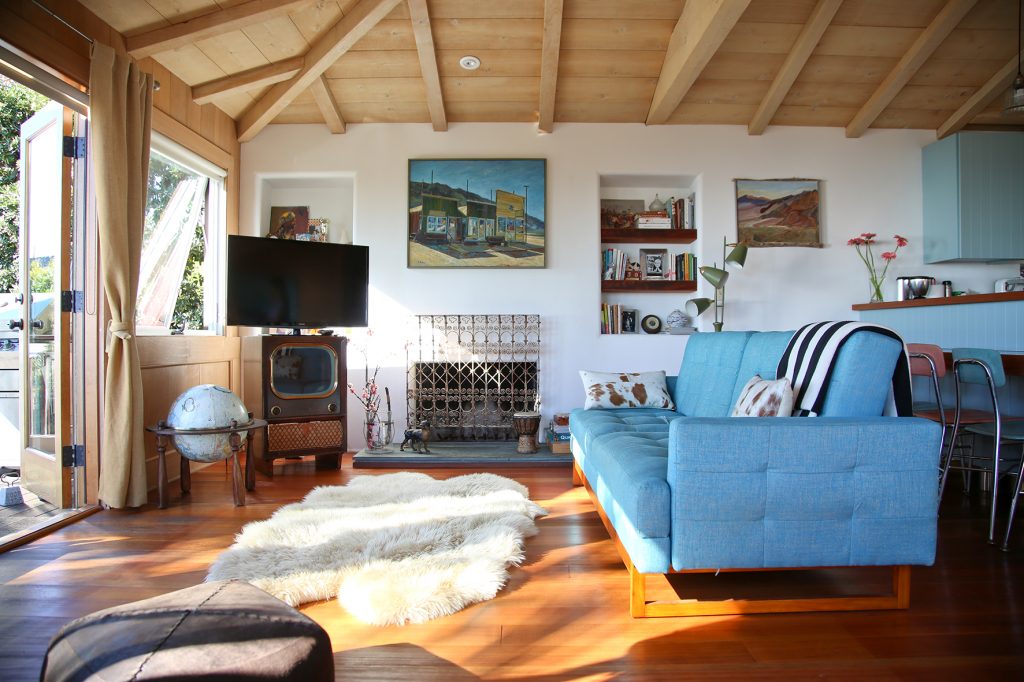 FAMILY FACTS: Michael and Christine Wagner, and their two children, Eric (10) and Nikki (8)

FABULOUS FEATURE: Sliding bifold doors that open up the interior space to the outdoors

Right next door in a three-story contemporary beach house live the Wagners: Michael, Christine, Eric and Nikki. The Wagners are somewhat newcomers to the street, but making friends around the block hasn’t been a problem at all.
“Everyone here is very nice,” Christine says. “It’s pretty kid friendly and dog friendly, and everyone says ‘hi’ to each other. It’s very laid-back here, and we love it.”

In fact, the Wagners’ children quickly befriended the Jenkins boys and sometimes they’ll call each other via a makeshift tin can “phone.” “They’re best buddies, and they’re over at each other’s houses all the time,” Christine says. “There’s no fence in between [our yards], so the kids and dogs roam from their backyard to ours, and they all have a good time.”

Originally a cottage built in the 1960s, the home was destroyed in the 1993 Laguna Beach fire, and then entirely rebuilt in the mid-1990s by a previous homeowner. Today, it’s decorated with a warm, beachy flair, using earthy colors and textures to balance the many clean lines and sleek details. 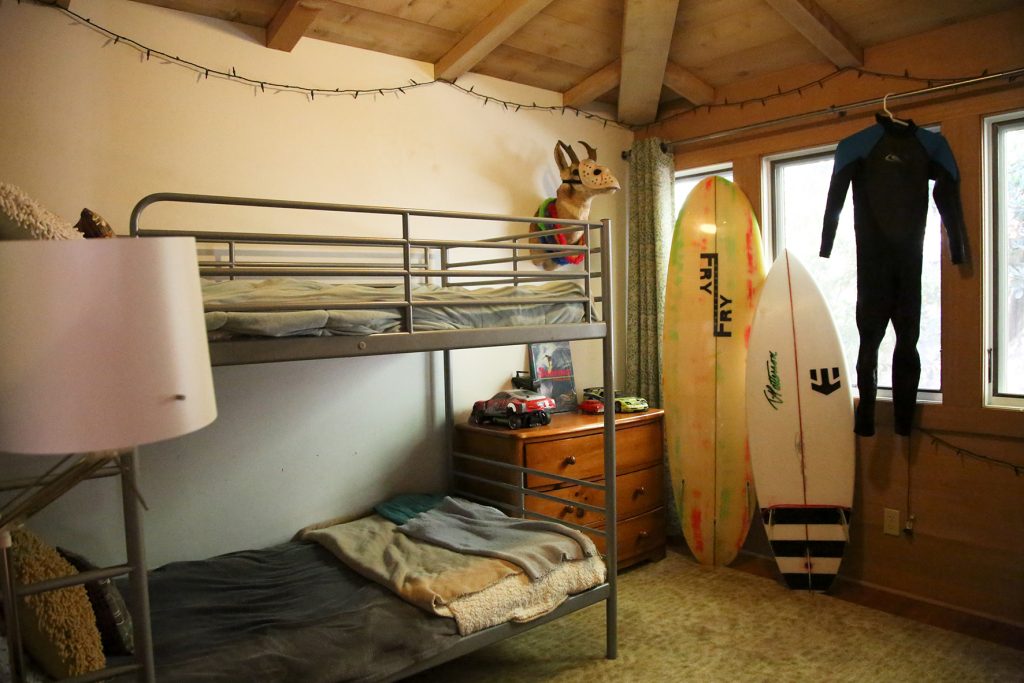 Since the whole front of the house faces the ocean, the neutral color scheme also makes it easier to focus your attention outdoors. The view, according to Christine, is the home’s top feature. “We have unobstructed, 180-degree views from the second and the third floors,” she points out.

Bifold doors in the living room and the upstairs master bedroom highlight the view by completely opening up to the outside and bringing in fresh air, “which is great when you don’t have air conditioning in Laguna,” Christine adds.

Lush landscaping surrounds the property and makes the home look like it’s growing right out of the hillside. Before, the front yard was overgrown and unkempt, but the Wagners cleared everything out, revealing stone steps they didn’t even know were there, and then spruced it up by planting succulents throughout.

The wood deck off the master bedroom just may be Christine’s favorite spot in the home. Although it’s on the small side, the ocean view enhances the feel of the space. “It’s [a] great [place] for a cup of coffee or a glass of wine at night,” she says.

“It’s comfy, it’s cozy—it’s like our own private deck for the two of us.” 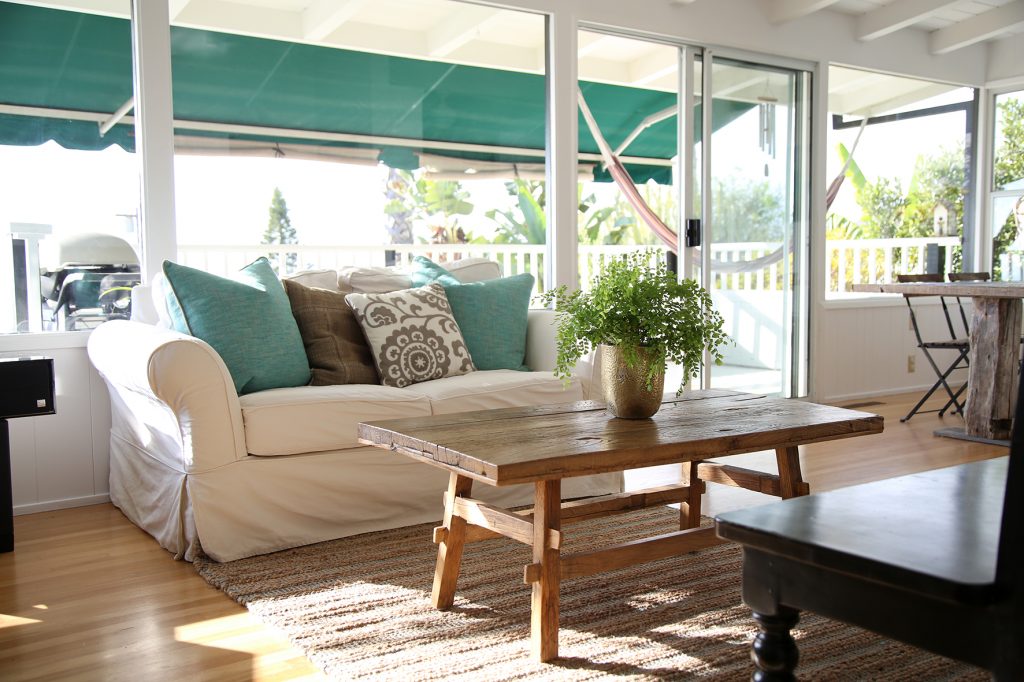 FAMILY FACTS: Peter and Elizabeth Black, and their two daughters, Ella (4) and Halle (2)

DAY JOB: Peter is a financial adviser; Elizabeth is an occupational therapist and stay-at-home mom.

FABULOUS FEATURE: A comfy hammock with a spectacular view of the ocean

Farther up the street is a Cape Cod-inspired cottage with gray wood siding, now home to Peter and Elizabeth Black. The young family moved to the neighborhood in 2013 with their preschool-aged daughters, Ella and Halle.

When they first purchased the home, it was an unattractive yellow and green; however, they’ve since repainted the exterior with gray and black accents to create better curb appeal. Inside, the couple painted the wood-beam ceilings and walls white to keep the interior crisp and clean, and give a classic feel.

“We had so many neighbors ask us when we were going to paint and when we finally did, they thanked us,” Elizabeth says. “It took us about six months to do it, but we were really happy when we did. You really had to have a vision.”

They also made sure to remove the old draperies that previously blocked out the view. “We don’t have any curtains [in the main living area],” Elizabeth says. “There’s just so much natural light.” 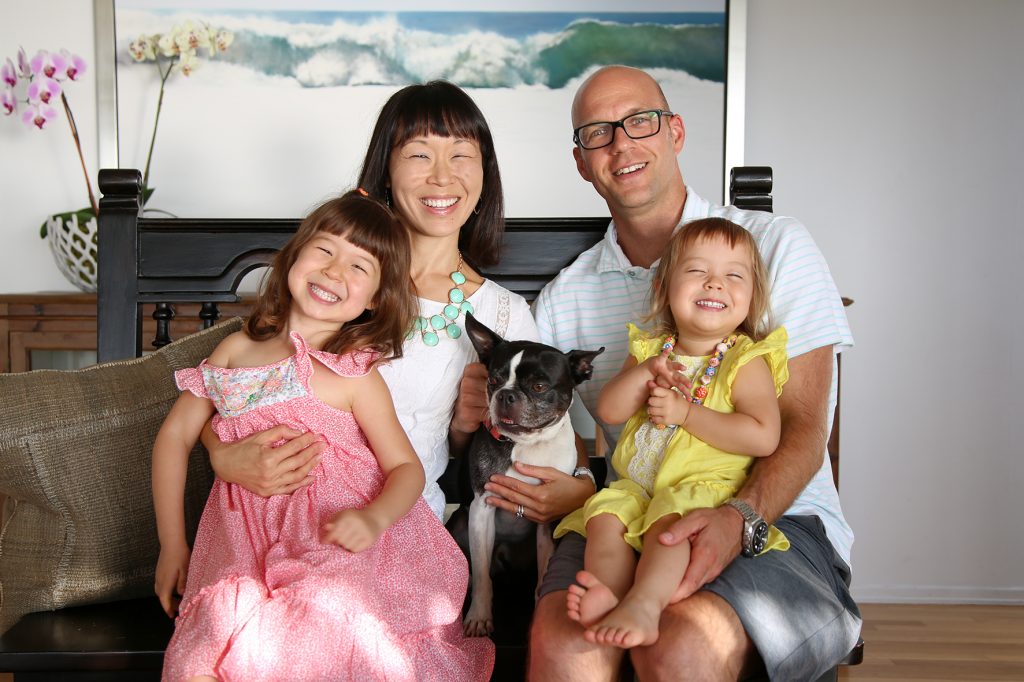 The bright white walls make the perfect backdrop for the turquoise accent colors to pop. Accessories add personality to this small space, including the interior of the front door painted in turquoise, a large-scale print of waves crashing on Main Beach painted by Laguna artist Todd Kenyon and a small “Whale Watchers Welcome” sign—a gift from a friend.

“You definitely see a lot of wildlife here from the kitchen, deck or living room windows,” Elizabeth continues. “A lot of times we’ll just be sitting on the sofa and will see a whale while we’re eating dinner.”

The kitchen, much like the rest of the home, is light and bright. With white Shaker-style cabinets, brushed nickel hardware, light gray and white granite and quartz countertops that resemble Carrara marble, and a reclaimed wood table that Peter built for the breakfast nook, the kitchen and dining area takes on a farmhouse vibe.

The Black family’s favorite feature of their home, a hammock on the deck right off the living room and kitchen, also seems to be popular with their guests.

“Anytime someone comes over, the signature spot they gravitate to is the hammock, and people will take a picture of their feet and the ocean [in the background], and then post it on Instagram,” Elizabeth notes. “We love being able to see the ocean all the time and watching the sunset.”