Resplendent with lush gardens and whimsical features, the homes on upper Diamond Street look like they’re right off the pages of a storybook.

Laguna Beach residents living on upper Diamond Street can hop in their golf carts and head straight down to charming Woods Cove Beach, watch the sun sink into the Pacific from their hill-perched homes or enjoy the serenity that comes from living on a quiet street. Without through traffic, the neighbors typically know anyone who’s coming or going. “People in this neighborhood are very friendly and look out for each other,” resident Craig Davis says. A few homes in this neighborhood are situated on land that used to be a botanical garden in the 1920s, giving each house on this street its own individual style that’s reflective of the people who live in them. 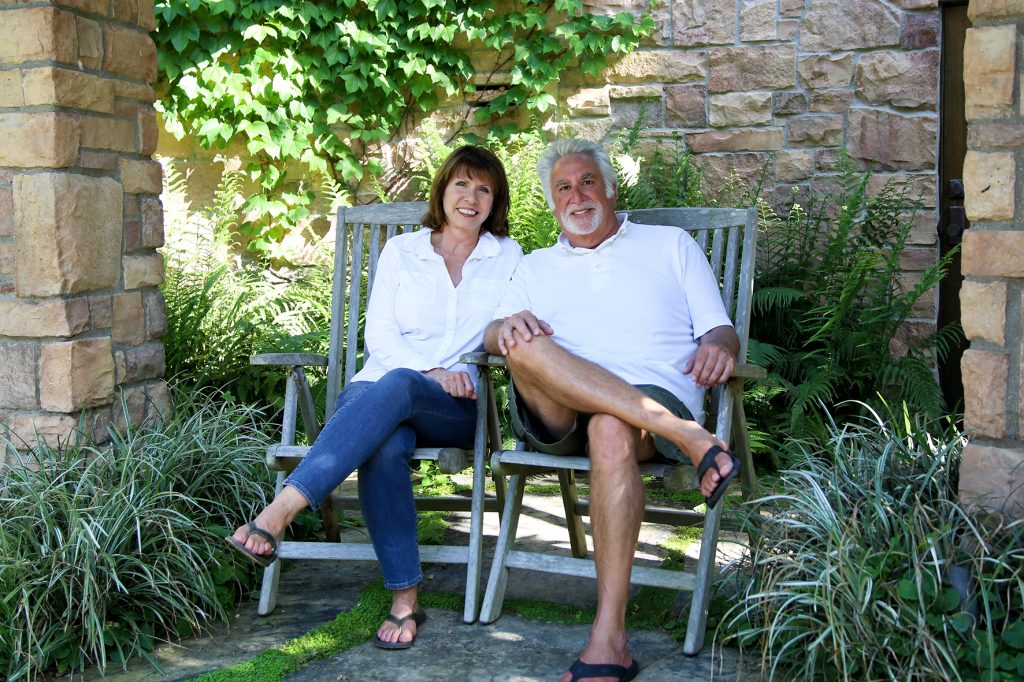 Living near the end of upper Diamond Street, Lecia and Craig Davis were lucky enough to purchase the nearly half-acre parcel of land. They kept the silhouette of the 3,500-square-foot 1950s house and turned it into a custom 4,700-square-foot Tuscan home with the help of Laguna Beach architect John O’Neill. They brought in bulldozers to take out the existing natural landscaping and designed a manicured yard that includes a 50-foot saltwater pool, lavender garden and full-grown trees, which were delivered with the help of a crane. “We wanted to live someplace that allowed us to walk to town, with a view, a garden and a big pool,” Craig says. Within only 26 months of purchase, the Davises had finished their dream home in 2007.

While Lecia loves to cook and entertain in her custom gourmet kitchen with an ocean view, zinc countertops and Wolf range, Craig enjoys the front deck the most. “It’s like an old-fashioned porch attached to [the] living room,” he says. 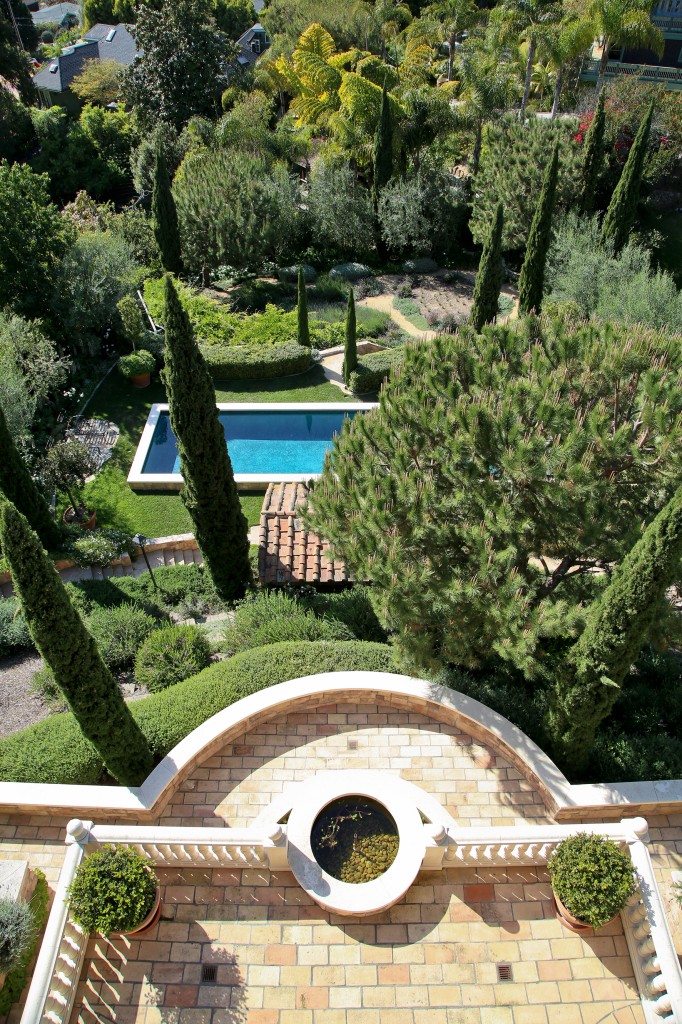 “Neighbors come by walking with their dog or kids, and you can talk to them from the porch.”

Stepping inside, the three-story home incorporates limestone in the seven matching hand-carved limestone fireplaces, driveway arches, balustrades, exterior door thresholds and window casings. Additionally, many of the floors are made of black limestone.

The Old World architecture continues from the house to the exterior property with a 200-year-old Italian clay tile roof, cobblestone driveway, fern grotto and dramatic arched loggia overlooking the garden.

As former president of the Laguna Beach Garden Club, Lecia loves to spend time in her yard. She enjoys the buzz of the bees that are attracted to the lavender and rosemary. For the garden and landscaping of the property, Lecia went with a small palette of plants that includes sweet peas, rosemary, bear’s breeches and mock orange. The garden also includes a wisteria-covered trellis as well as olive and lemon trees.

In addition to the friendly neighbors and ocean views, the Davises love that many of the homes were designed by Laguna Beach custom home builder Ken McMurray, which they say gives the neighborhood a congruent feel. 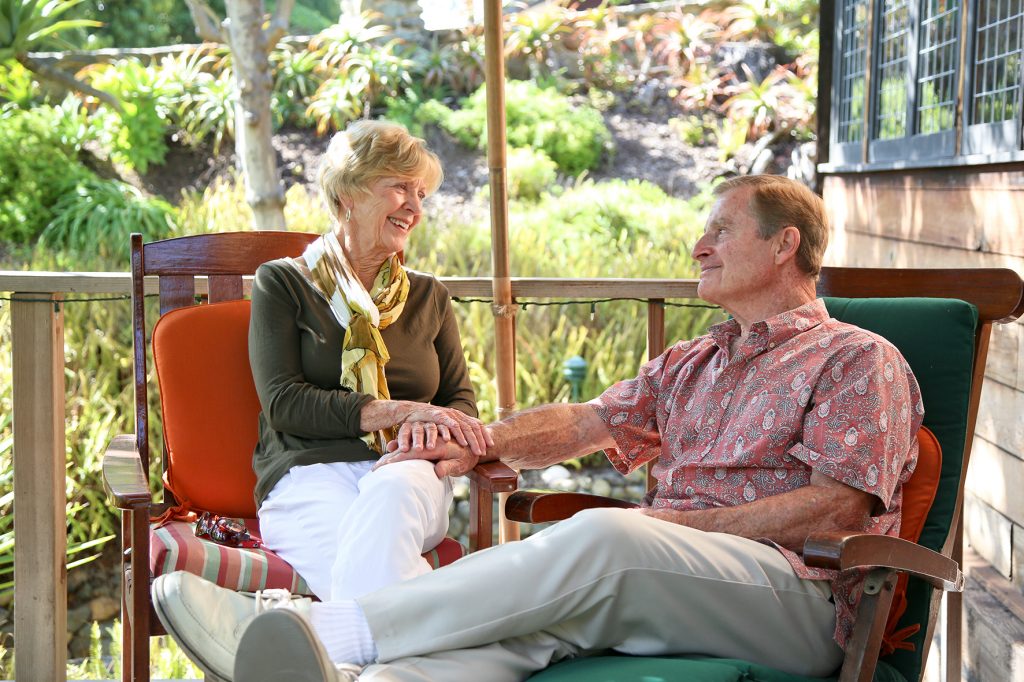 Having purchased their home in 1965, Stephanie and John Cunningham have seen lots of neighbors come and go over the years, but one neighbor, Roy Childs, founder of the Pottery Shack, has been like family. “He took us in and always included us,” Stephanie says.

The Childs family used to own the Cunninghams’ land, which was part of a botanical garden in the 1920s and, eventually, parceled off and sold as home plots; one of those lots is now the site of the Cunninghams’ home. Reminiscent of the garden days, there is a stream with a waterfall feature that runs through the yard and underneath the house. The city has since diverted the majority of the run-off and now the Cunninghams’ neighbor can control the flow of water manually.

The 2,200-square-foot home, which Stephanie says has a “Big Sur mountain cabin” feeling, is secluded and surrounded by trees and nature. “You don’t really see any other houses,” John adds. “You look out any window and see greenery. It makes it feel like you have more room.” Former Laguna Beach-based architect Sid Nesbit originally started the home design, but wasn’t able to complete the project. Subsequently, several other architects, including Lamont Langworthy (formerly of Laguna), took it on.

The interior features an open floor plan. Best seen from the second story loft, there is a river rock fireplace built by the previous owner that runs the length of the living room. 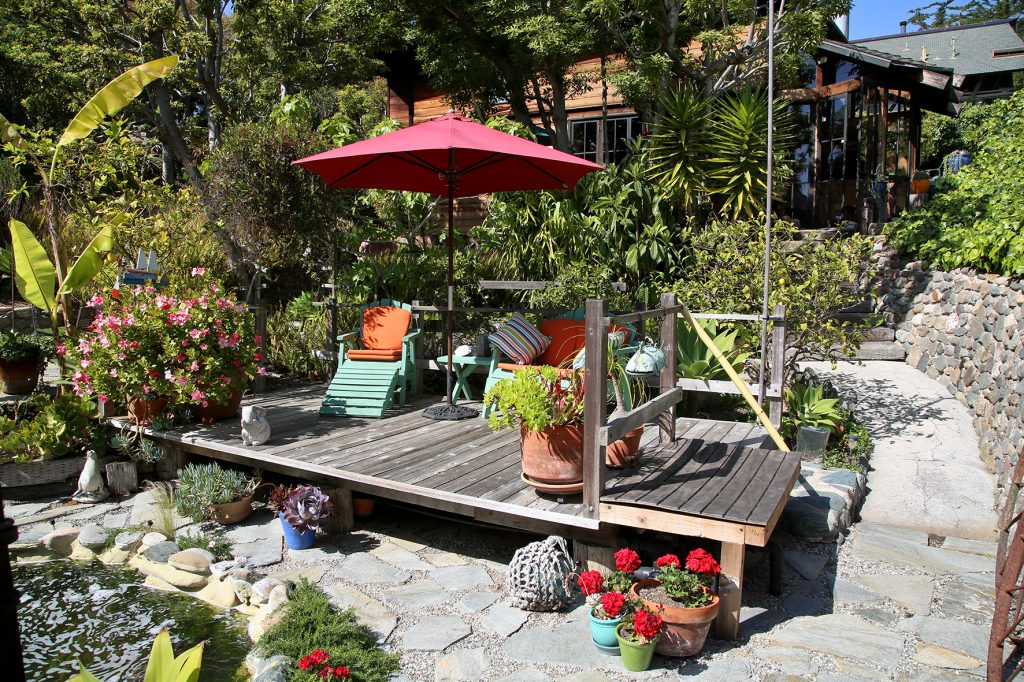 There’s even a wine bottle and cork embedded in the mantle. Art and history are weaved into the eclectic interior design, which includes custom-stained glass windows that add light and beauty throughout the home. Although Stephanie is a retired art teacher, who displays her work at the Festival of Arts, it is mostly John’s impressive landscape and still-life paintings that adorn the walls.

As for history, there are many meaningful relics that add character to the home. Reminiscent of Stephanie’s time spent living in the City by the Bay, a large antique San Francisco street light hangs as a chandelier in the living room, while a restored 1894 toilet from a San Francisco junkyard resides in the bathroom.

Additionally, since John is founder of the Pacific Marine Mammal Center, the home feels complete with a beautiful custom aquarium that he built himself. 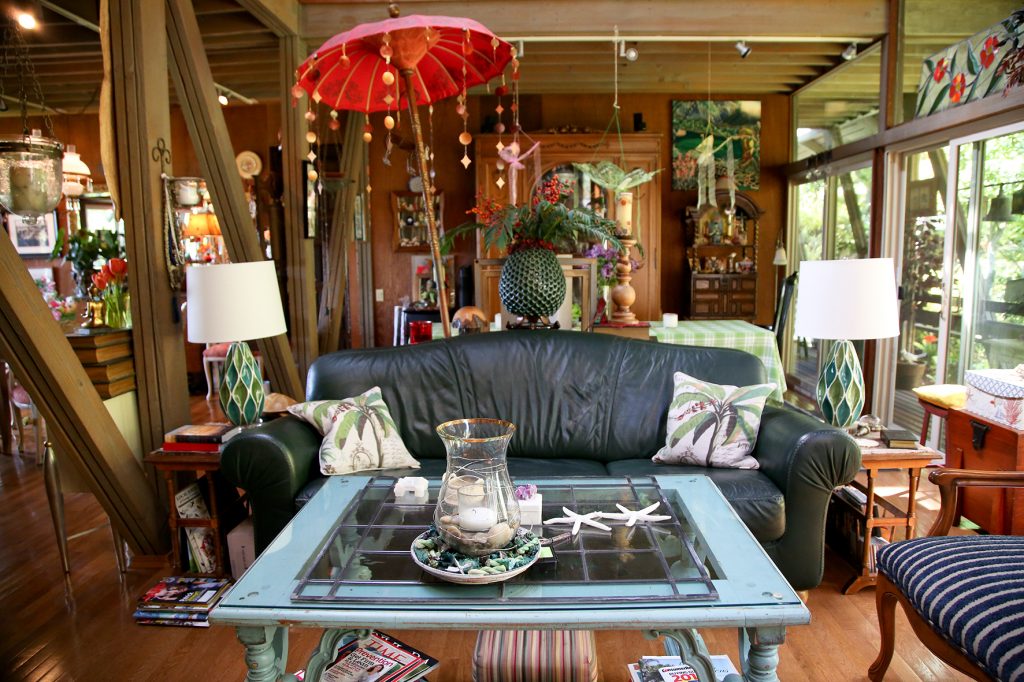 Built in 1964 and nestled in a lush and tropical setting, the “Bridge House” was designed by former Laguna Beach architect Lamont Langworthy and is said to be inspired by New England bridges.

Jeanne and Stephen Groth purchased the home in 1998 and enjoy the unique design that boasts ocean views from every room with 13 sliding glass doors that allow the ocean breeze to circulate throughout the home.

With a skylight and decks that run the length of the house on both sides, as well as sliding glass doors in every room, the home has an outdoor-living feel to it.

“When it rains, it’s like being under a waterfall with the water pouring off the roof from both sides of the house,” Jeanne says. There are also large diamond-shaped windows on the side of the house that represent the name of the street on which the house is located.

Jeanne’s favorite part of the house is the galley kitchen. “I love being in [the] kitchen and seeing all the way down PCH to the ocean,” she says. “I can look down Diamond Street and see if my husband is driving up.”

The perched house sits on an expansive lot, which is nearly one-half acre and spans across a natural ravine with an extensive yard and garden underneath the home. The site 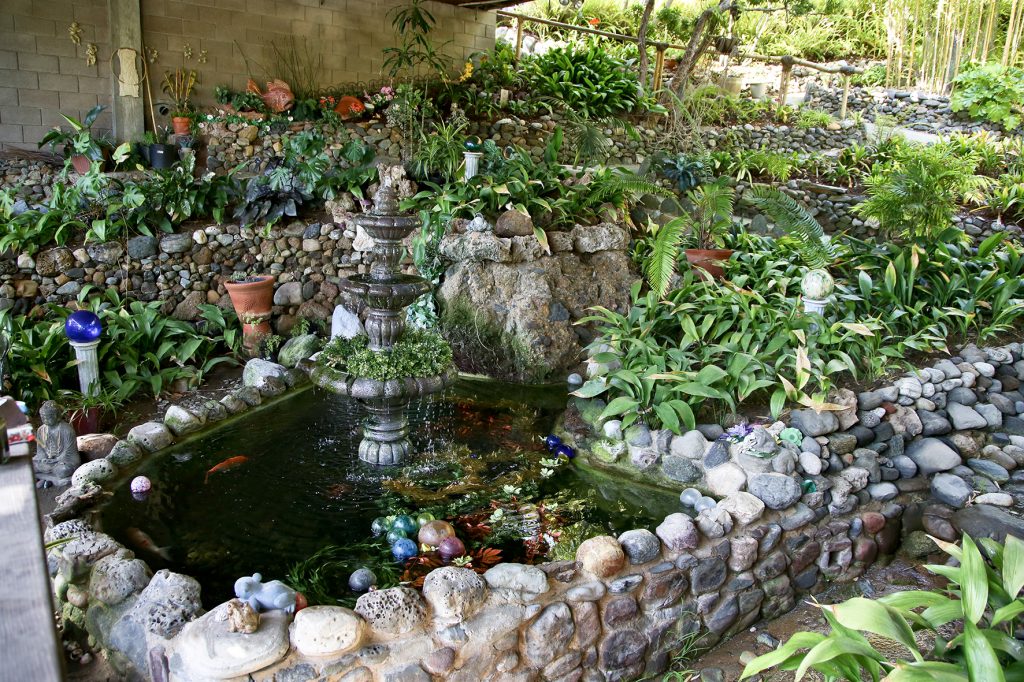 was also part of the 1920s botanical garden and part of its original pathway has been kept in tact.

Not wanting to take away from the property’s storied history, the Groths have stayed true to the original design and have kept the koi pond, which sits in the middle of the garden and houses seven koi in a large, circular fountain. The original fountain was damaged during renovations, but is used as decor in another part of the yard.

The tropical landscaping features bamboo, ferns, Spanish moss and succulents. The property includes a gazebo and what Jeanne calls a “dollhouse cottage,” where she displays her doll collection. Jeanne also enjoys creating whimsical fairy gardens in her yard with mini plants, furniture and fairy statues.

As for the neighborhood, the Groths enjoy the tranquility and uniqueness. “I like the fact that it is [an] all-American throwback, typical neighborhood,” Stephen says. “Homes are not cookie cutter.”