It may be hard to believe, but Sawdust Art Festival and Laguna Art-A-Fair turn 50 years old this summer. Though they share the same origin story—they formed in the 1960s in protest against the established Festival of Arts—they have each evolved into their own unique display of mediums from paintings to photography, ceramics, jewelry and more. Sawdust Art Festival, a nonjuried art fair, showcases the work of approximately 200 Laguna Beach residents, while Laguna Art-A-Fair (which added Laguna to its name this year), is a juried presentation featuring 125 international and domestic exhibitors. Both are essential to the city’s character and global reputation as a premier art destination.

“When the shows first started, they were really almost avant-garde,” says Paula Hinz, a Laguna Art-A-Fair exhibitor since 1979. “They were very artsy, maybe even a little bit eclectic. The artists were extremely colorful. Now, it’s evolved into more of a technical business. It’s more professional. But it’s still a beautiful location, and they still reflect the color and character of Laguna Beach.”

Here, we explore the histories of these two iconic art festivals.

1965: The forerunner to Sawdust Art Festival and Art-A-Fair—called the “Rejects Festival” by some—occurs on the Peacock Lot, across the street from the present-day Laguna Beach library.

1967: A group of Laguna Beach artists, including those  who had formerly shown their work at Festival of Arts, form the Laguna Beach Artists and Gallery-Owners Association. They find a vacant dirt lot owned by Larry Kronquist on North Coast Highway, recruit artists and then create a brand-new festival. It is dubbed “Sawdust Festival” by a local reporter after organizers spread sawdust on the grounds to keep the dust at bay.

1968: Sawdust moves to a 3-acre eucalyptus grove owned by Walter and Dorothy Funk at 935 Laguna Canyon Road. Throughout 1968, several conservative artists break off from the group and form the “Sawdust Splinters,” which later becomes Art-A-Fair. Despite having fewer resources, the now-called Sawdust Art Festival succeeds in putting on another summer show.

1972: Sawdust purchases the 935 Laguna Canyon Road property from the Funks for $225,000. The board also decides to start charging admission—25 cents for a weeklong pass. Meanwhile, Art-A-Fair is chosen as the new name of the Sawdust Splinters after an official decision.

1973: Art-A-Fair moves to a larger property adjacent to Hotel Laguna. The festival doubles in size to 110 artists and touts itself as a leading showcase of traditional art in Orange County.

1978: Sawdust experiences staggering success throughout the 1970s and 1980s. The event attracts big crowds, with a peak of more than 325,000 attendees in 1978, including almost 10,000 guests on one Sunday in July. Eventually, it necessitates a full-time staff and permanent structures.

1987: A Sawdust Artists’ Relief Fund is created to assist a critically ill Sawdust artist. It later becomes the Artists’ Benevolence Fund, helping Laguna Beach artists who have suffered from a catastrophic event.

1988: Art-A-Fair eventually moves to 777 Laguna Canyon Road, near Sawdust and closer to downtown Laguna. This becomes its permanent home. “We’re still very true to our roots,” says Teri Powers, the festival’s vice president of marketing. “We offer an art show in Laguna to those outside of the Laguna Beach ZIP code. You can be from anywhere in the world—it doesn’t matter. Just show up and be in your booth. One of the things that sets us apart is we’re a co-op. The artists all work the show, from building booths to taking tickets.”

1991: The holiday-themed Winter Fantasy show, which includes work exhibited by non-Laguna artists, makes its debut at Sawdust. It now runs annually for five weekends during November and December.

1993: A disastrous fire rages through Laguna Beach and dozens of artists’ homes and studios burn down. Sawdust is saved by quick thinking from grounds manager Kurt Blanton and others using hoses. Flames also come within feet of Art-A-Fair. The Benevolence Fund assists many affected by the fire.

1998: The Art-A-Fair property is completely renovated  and given a new facade, offices and artist booth layout. Tivoli Too, a European-style courtyard that can be used as a private venue, is also added to the back of the campus.

2016: This marks the 50th year of the Sawdust Art Festival and Art-A-Fair; the latter changes its name to Laguna Art-A-Fair to celebrate the occasion. “There’s a genuine facelift to the show, a genuine sense of freshness to it,” says Jay Grant, Sawdust Art Festival president. “There will be a lot of innovative and new stuff. It will still have the Sawdust feel, but it is going to have a fresh look to it.”

On the 2016 article: Known as an art town, the summer festivals are woven into Laguna’s very identity, bringing visitors from around the world to this coastal community. A look back at the history of Sawdust Art Festival and Laguna Art-A-Fair provides a nostalgic glimpse at those roots and how we’ve grown. 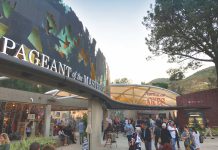