The Marine Room Tavern may have changed hands, but music and memories continue to be the main items on the menu.

Modest almost to a fault, the Marine Room Tavern is a cherished chapter in Laguna’s storied history. The second bar in town to get a liquor license, it doesn’t appear as though it’s changed too much since it opened way back in 1934.

Not much bigger than a postage stamp, the establishment rarely feels claustrophobic, even with summer crowds. Wood-paneled walls, furniture with sturdy framework and warm flickering fires in a ceramic tile hearth create an intimate atmosphere. Curious bric-a-brac, such as old Los Angeles Times and Playboy cartoon sketches by Frank and Phil Interlandi—brothers and regulars in the 1970s who had a comical habit of sitting at opposite ends of the bar—add a cheerful vibe. A scuffed wooden floor, charming as it is, is buckled in places. It’s the type of deliberately imperfect aesthetic a sentimental owner might be reluctant to repair.

At a glance, the Marine Room is the quintessential workingman’s watering hole. Drinks are cheap, and simple pleasures like dancing to live music,
bring in folks from all over. One “local” drives from Mission Viejo once or twice a week.

“It’s not exactly a blue-collar bar,” says Donny Bob Coulson, who sits at the bar, good-naturedly. “This is Laguna—most are writers and artists. But, yes, you can wear what you want to wear.” After alternating sips of beer and Patrón, he adds, “Let’s just say it’s not [trendy] Newport.”

No particular demographic dominates, though patrons tend to fall within the middle-aged bell curve. “[The crowd] hits every end of the spectrum,” doorman Garrett Bray says. Lawyers who moonlight as bikers, artists who teeter between success and vagrancy, mailroom clerks who made it to CEO: They’re all here, sidled up by the bar throwing back a few cold ones with friends.

Among the colorful characters that frequent the Marine Room, Michael Ahern—Reverend Mike to his friends and the 2,000 couples he’s married since the early 1990s—goes the extra mile, volunteering his time to ensure the entertainment schedule gets printed in the local papers. “Back then I wanted to get more girls in here,” he explains of how his 25-year commitment began.

Though it could hardly be described as a pick-up bar, the Marine Room has had its fair share of romances. Carole Hewitson met her partner of 13 years, Byron Stoddard, here. She chuckles when she recalls how Byron had checked her out in the weeks before he made his big move. “He says he wasn’t stalking,” she says with a wink. “He was ‘observing.’ Finally he asked me out and we’ve been together
ever since.”

Carole kept coming back largely because she felt safe. It’s not a rough-and-tumble sort of place. “We’re mindful to keep an eye out,” says Robbie Boyd, a veteran bartender and nephew to former owner Kelly Boyd. “We want women to know they can come here, and there won’t be any problems.”

Carole adds, “There would always be someone to walk me to my car.” Nowadays, she rides on the back of Byron’s Harley, and the two almost never miss a Sunday show. “I know about half the people in this room by name, another quarter by sight, and the rest I just haven’t met yet.”

Carole and Byron’s billiards pals Steve and Amber Renner share a similar love story: Six months after their first date, they were married. Amber jokes that finding love at the Marine Room was, for her, practically hereditary. “My mom met her first husband here, too.”

The most interesting thing is the people you meet, agrees Kelly, who, over the course of 25 years, shaped the bar’s once-suspect reputation into one that is altogether more respectable. “People come here on vacation and this is their place. We’ve had people get married. We’ve held memorial services and parties for candidates running for City Council. This is their local bar.” 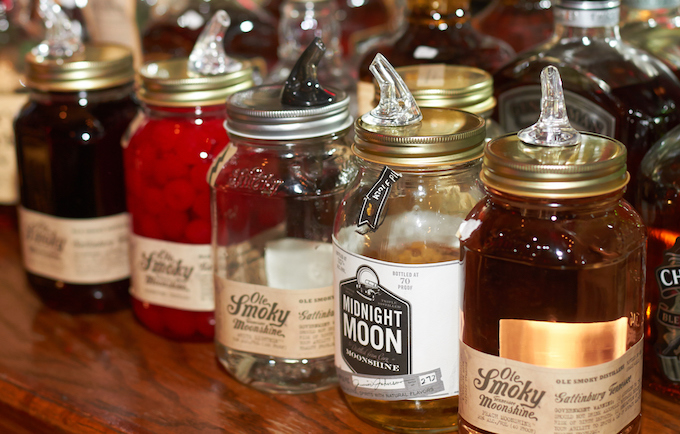 Patrons from all walks of life are unanimous in their praise for the rotating bands and singer-songwriters who play on most nights. Three enduring favorites—Tricia Freeman Band, West Coast Strayz and The Strangers Band—perform a spirited mix of modern pop and classic-rock covers.

Arguably, the Marine Room’s main attraction is The Missiles of October—by no means your average bar band. Their take on 1960s Memphis rhythm and blues has a strong undercurrent of 1970s Laurel Canyon soft rock that makes every song feel like a half-remembered radio favorite. One of frontman Poul Pedersen’s fondest memories of their 22 years of Marine Room gigs is when the band recorded a packed house singing the chorus to one of their songs, then used it for the studio version.

Mike Solomon, a real-estate entrepreneur and part-time musician who occasionally sits in with some of the house bands, is quick to sing the Missiles’ praise. “Hands down, the best bar band in Orange County,” he says.

The sound level is loud enough to encourage dancing, but not so loud that it interferes with conversations further away from the stage. Fans sing along, even if the words are only a rough approximation. Dancing isn’t mandatory, but there’s no reason to fight the impulse. Everyone who’s doing it looks as if they’re having a pretty darn good time.

“I call it Sunday afternoon church,” patron Beverly Factor says with fervor. “We all come, have a little holy water, dance. … It’s always warm and friendly. I love this place.” 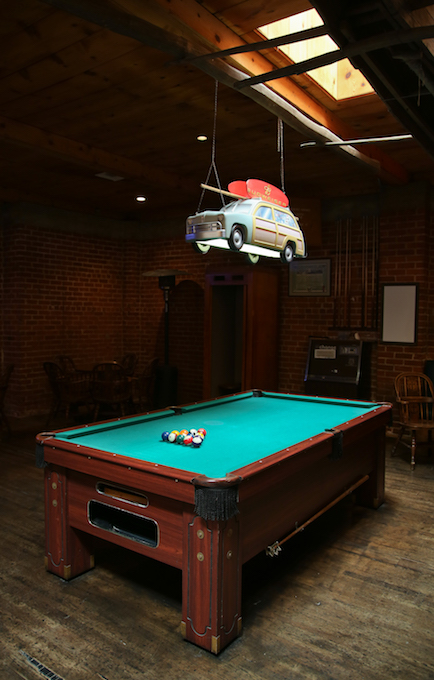 A fourth-generation resident of Laguna, Kelly became the proprietor of the tavern in 1987. At the time, it was the kind of joint whose regulars showed up with the sunrise. Kelly turned the bar’s culture around completely.

About eight years ago, he began to take an active interest in city politics. With a growing desire to spend more time with his wife, Kelly thought about retiring from the bar business. Then, last summer, faced with an increase in rent, he decided to sell.

“Everybody was wondering what was going to happen,” Poul says. “We’d be able to find another place to play, but it wouldn’t be the same. Kelly’s always supportive of the local music scene.”

The suspense didn’t last long. Kelly, newly re-elected as mayor of Laguna Beach, found a suitable buyer—someone who was dedicated to keeping the Marine Room more or less the same. Perhaps he had Christopher Keller in mind all along.

“I’ve known Kelly for quite a while,” Chris says. Originally from New Jersey, Chris got his feet wet in Las Vegas, first at the MGM Grand and later as director of VIP services at New York-New York.

Keen to strike out on his own, Chris bought a small bed-and-breakfast in Anaheim. Fast-forward a few years, and he began the search for his flagship hotel. “One Sunday we hit about 25 properties,” Chris recalls. “We started in Palm Springs and LA; our very last stop was [La] Casa del Camino. We got out of the car, looked up and said, ‘This is the one.’ ”

Though his company, Casa Resorts, owns properties elsewhere, Chris has made Laguna his home. (Update: he no longer owns La Casa del Camino, but is still based in town.) “There’s something magical about Laguna that’s hard to describe,” he says. “But once you experience it, you’ll know exactly what I’m talking about. I’m happy to spend the rest of my life here.”

It seems unlikely the Marine Room’s economic prospects were the driving force behind Chris’ decision to buy. Still, when the opportunity was presented, he jumped at the chance. “It’s a great place, with a great vibe and a great loyal following.”

He’s adamant that he doesn’t have plans to make any major changes. “We want to continue to make it a place ‘where locals gather’ [the tavern’s long-standing motto] a place where, prior to dinner, you can stop for a drink.”

Chris does, however, have specific upgrades in mind. “We’ll keep the heart and soul of it the same—the history and all of its traditions. But we are going to make some cosmetic improvements: the floor, draft beers, craft cocktails. We’re going to try to fill it when we don’t have entertainment going.”

The improvements he’s already implemented are making a positive impact. Modern restaurant software has improved efficiency. A large chalkboard looks to be the first step toward bringing in happy hour appetizers. “Chris is doing what I’ve always wanted to do,” Kelly’s nephew Robbie says from behind the bar, where he’s polishing a glass. “I’m excited. It’s going to be really good.” 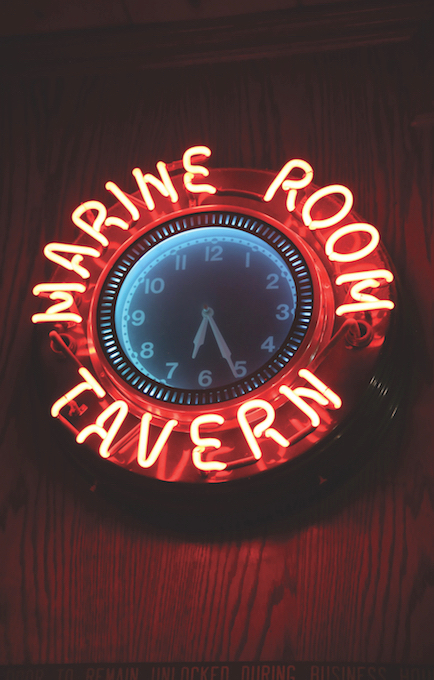 “There are not many places where you can play original music,” Beth Fitchet Wood says as she adjusts a mic stand just before taking the stage. For the last eight years, she’s hosted singer-songwriter night at the Marine Room Tavern. “We have such good music here, it’s ridiculous.”

In the early 1970s, Beth played in an eclectic surf-rock band called Honk. Following the success of their surf film “Five Summer Stories” soundtrack, they toured across the country with such established acts as Loggins and Messina, The Beach Boys, Santana and Chicago.

In one incarnation or another, Beth has been playing at the Marine Room for more than 25 years. On Tuesday nights, she opens and closes each show with an entertaining solo performance that veers from wistful folk to upbeat adult contemporary. The ease with which she handles an acoustic guitar affords her the opportunity to cover songs on a whim—much to the delight of audience members.

“It’s the best kept secret in Orange County,” says Chuck Roberts, who drove from Apple Valley to perform. “I’ve seen everything from gospel and folk to a ladies barbershop quartet.”

Each week, Beth books two or three from a growing pool of several dozen musicians who play for little or no money. From time to time, big-name acts like Christopher Cross have dropped by to test out new material.

“There are times when music turns to magic,” Beth adds thoughtfully. “It tends to do that here.”

On the 2013 article: An institution in Laguna since 1934, Marine Room Tavern is known for its mix of whiskey—more than 200 kinds—live music, billiards and patrons representing all walks of life. Although it’s been closed during most of the pandemic, it finally reopened in June. No doubt, you’re as ready as we are to belly up to the bar and get out on the dance floor once again. 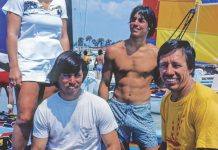 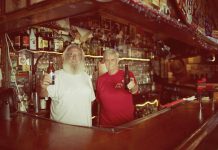 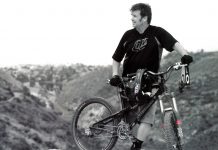