The legendary Sandpiper Lounge is turning 70, and we’ve got the dirt on the Bird.

The legendary Dirty Bird bar and local institution turns 70 this year. Chances are you’ve ended up there many a night, whether you meant to or not. We celebrate its classic dive ways with wild stories and a look back from all angles.

There are a few new stickers on the front door, a new surfboard went up above the bar 10 or 12 years ago, and they added an ATM. Other than that, it’s the same as it ever was—still dark with few windows and run by the same brothers, co-owners Chip and Chuck Harrell, who’ve had the place for the last 40-some years. It’s the only place in town that hasn’t changed. You can always count on live music every night of the week, the bar being open 365 days a year and the Dirty Bird not closing until 2 a.m.—no matter what. Drop in, kick back, get your Jack and Coke for 7 bucks and savor the entree choices of beer nuts or peanuts. It’s as simple as that. So what keeps the Sandpiper the beloved bar it is? The white-bearded bartender who hasn’t shaved in four decades (and fully fesses to being locked in the ’70s) shares the secret of the Dirty Bird’s long life. And we share some of your stories about The Sandpiper Lounge, which are as classic as the place itself.

Down and Dirty With Chuck Harrell

LBM: Is there a motto to the place?

CH: Well this sign here says it pretty well, “The early bird gets the worm, but the Dirty Bird gets the Cougar.”

LBM: How did the legendary Sandpiper come to be?

CH: My uncle opened the Sandpiper in 1942, and he had it for about 12 years. Then he sold the business, and it changed hands four times. In ’69, my brother and I were right out of the military and the place was up for sale. So my mom asked us if we wanted to try the bar business. We said, “Sure.” So we bought the bar, and to clear escrow we were rolling quarters.

LBM: Did you know how to run a bar?

CH: Well, thank God for a guy named Tommy Auble who helped us learn the business, because we only knew the other side of the bar—how to drink. 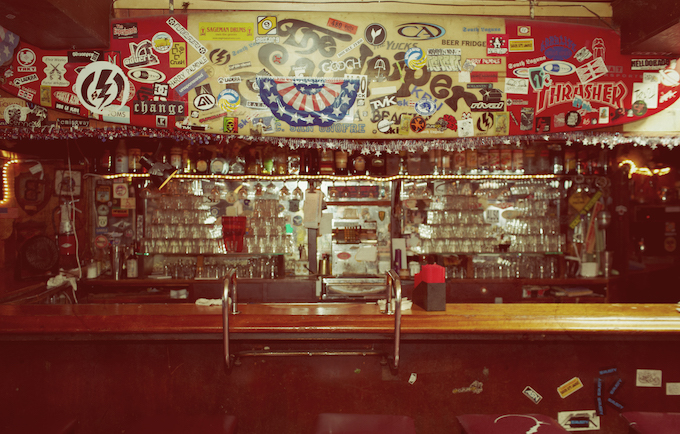 LBM: Glad you got into this business?

CH: Oh my God, I don’t know what I would have done if I didn’t. I love this place. It’s in my blood and has been in my life for 40-plus years. I’ve whittled myself down to two nights a week so my kids, who are 24 and 26, can learn the business, and I think, “God, why am I doing that? I love bartending here.” Even at 66, I’m still pretty fast and pretty good.

LBM: How about the music scene here?

CH: We started out with music only on weekends, and one of the big deals that helped us back in the day was booking The Chantays, who played “Pipeline.” They played for us for about three to four years on weekends. Then things started getting busier and busier, so we started live music more, and the next thing you know in the late ’80s, we started doing live music seven nights a week. We’ve had Common Sense play here, Rebel Rockers, a lot of really great rock ’n’ roll bands.

LBM: Why has the Sandpiper stayed when so many others have come and gone?

CH: We weren’t ever here to run away. We love Laguna. We’ve been here all our lives. A lot of people in this business build something really good, then sell it. That was never our intention. Our mom was with us the first 35 years and her help and attitude were awesome. She wasn’t afraid to call us on something either. She was like, “Hey this is the Sandpiper, and we do it this way.” And that’s what I’m trying to teach my kids. It’s all old-school really.

LBM: How about Chip, your older brother?

CH: He’s like the leader of the Sandpiper. The head guy. A lot of people call him the really old guy, and I’m the old guy. There isn’t a person in the world I’d rather be in business with. I have so much respect for him.

LBM: Is the place profitable in this economy?

CH: You know what, we’re just fine. We keep our head above water. If you want to say profitable, measuring by how many toys we have, you’re talking to the wrong people, because we’re not that kind of people. We’re down-to-earth, down-home. We come in here to have fun, work, make money, and business has been good. We’ve been blessed with a lot of good bands that have been here. And we don’t change. And in a place like this, that’s the main thing we do. Our employees stay here eight, 10, 15, even 30 years. 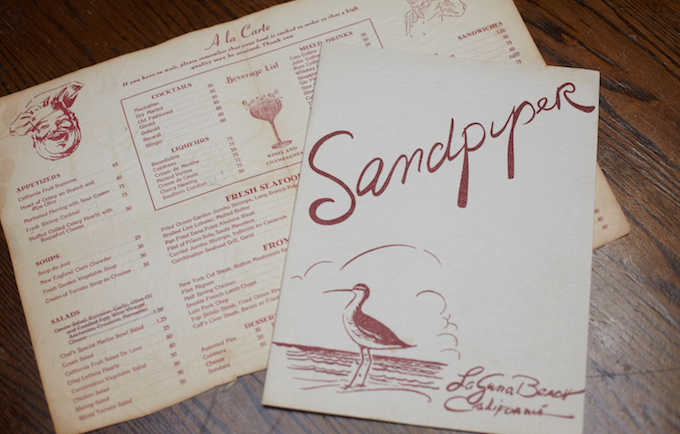 LBM: What about the brawls?

CH: Well 98 percent of the time it’s under control, but we have a saying here that we call “WW,” which means whiskey wins. And the whiskey wins every once in awhile.

LBM: Plan on staying in the business?

Heard the one about … Melvin Miller?

Back in 1960, Captain Joe Gestson drunk-dialed Peoria, Ill., from the bar and started talking to a tractor salesman named Melvin Miller. Joe told everyone about Melvin and they solicited donations to “bring Melvin Miller to California.” They got him to California, had to block off Coast Highway, a Marine Corps band met him at the airport, and when he finally got to the bar, they asked what he wanted to drink. Melvin ordered a glass of milk; he didn’t drink, so somebody had to run down the street and get him the milk. Melvin even ended up on “The Tonight Show.” 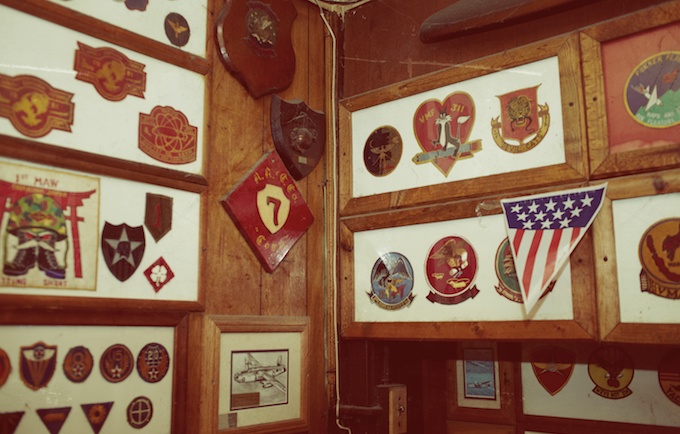 How about the one with the albino catfish?

As the “Albino Catfish Legacy of the Sandpiper” goes, Marine Dick Schwartz was off to Vietnam. He asked if he could put his albino catfish fish in the Sandpiper fish tank while he was away. They obliged, then a guy from the Department of Fish and Game came in to net the non-native California fish. So the Sandpiper had a wake, somebody made a fish coffin and the fish, and the Sandpiper made the front page of the Los Angeles Times.

Ron Pringle, World Anthem Band: “It’s come as you are. I live nearby, skateboard down and just show up to play as-is. You could show up literally wearing adult diapers and they would let you in. Anything goes. Yeah, I’ve seen some crazy [stuff] in the 20-plus years I’ve been playing Sandpiper. You watch people change from 9:30 p.m. to 1:30 a.m. I’ve had a lot of fun. We play reggae there every Thursday night, like the clock ticks. When I started out on Thursdays, I remember there were four people in the bar—Thursdays were the [slowest] night. That’s all changed. I remember when Dennis Rodman, a fan of the band, would come in and get hammered. He’d get behind the drums and I couldn’t get him out. So I had to grab and pull him out; it was pretty funny. A lot of celebs come through, NFL players. It’s all good vibes.”

Dr. “G” (aka Gary Arthur): “You know that story ‘Where The Wild Things Are’? That’s where they are—at the Dirty Bird. And they call it the Dirty Bird for a reason. Everything’s basically gone unchanged from the ’40s, even the carpet. If you go in during the daytime, you don’t want to look down. There’s gum all over it and everything. But at night, no one cares; it’s the Dirty Bird. It’s our little dive bar, and the vibes are always fun. It’s a good time, especially Thursdays. We took our son, Ryah, there for his 21st birthday. About 70 or 80 of us went after a big feast at our house and we walked to the bar. It was epic.” 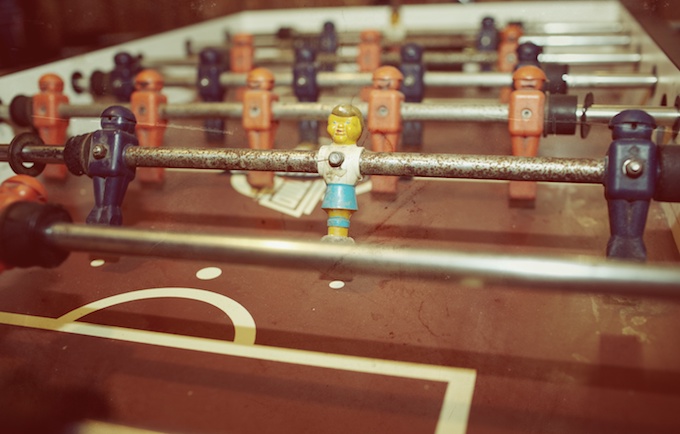 Angela Shipp: “When you’re driving home and someone suggests the Bird, it changes the whole evening. I come home sweaty, and I wake up the next morning with sore neck muscles” (from the dancing, people).

Cameron Hamil: “I went to the Kings vs. Ducks game, and [Kings player] Marty McSorley, who played in the game that night, was at the Bird when I got there. We had a couple beers together and talked about the fights he had gotten into that night in the game.”

Alec Bridges, The Greatest Cover Band EVER: “The nuttiest thing I’ve ever seen at the Dirty Bird was this guy we call ‘The Angry Man.’ Around Halloween a few years ago, this dude was wearing a Viking helmet, had a plastic sword and shield. He was right next to me and started punching his shield as hard as he could. He then turned to me, shoved his camera into my hands, motioning to me to take a picture and he grunted like a caveman. Then he started punching himself in the face as hard as he could, wanting me to take his picture. It was pretty insane. I took a few pictures, gave him his camera and got the hell out of there.”

Dr. Matthew Wheaton: “I’d say most stories about the Dirty Bird shouldn’t be told. It’s funny, as parents we all talk about how our kids may go to different schools, but not to worry, because they’ll all end up at the Sandpiper eventually. The Dirty Bird is a gem of nostalgia where you can go and relive fantastic—yet blurry—memories and feel like a 21-year-old again. And you might even find yourself closing down the place and needing the healing powers of a Penguin Cafe breakfast for your hangover.” 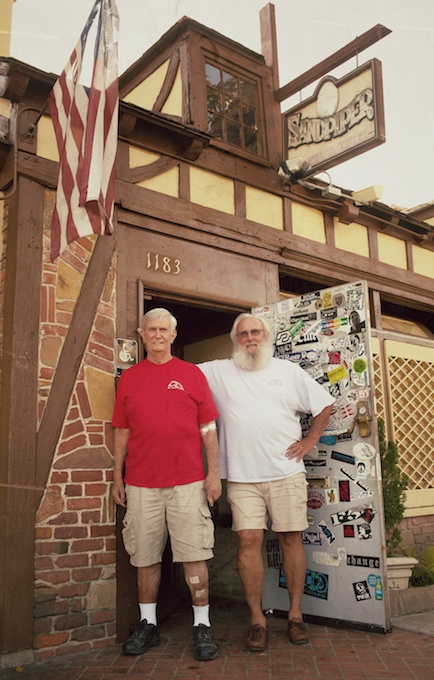 From World War II until about 1970, The Sandpiper Lounge operated like a Marine Corps officers’ bar, where officers could hang and not be bothered by young recruits.

Ever see the framed war patches at the Sandpiper? They’re from World War II, Korea and Vietnam. They keep them up because they are what kept the Sandpiper open from the ’40s to the early ’70s. They hung some patches up from Desert Storm too.

Who knew the dive was a high-end restaurant in the ’40s with New York steak served for $3.25 and a dry martini for 50 cents. And as the fabled story goes: Duncan Hines came by and hung their plaque out front to mark the Sandpiper as a five-star restaurant.

Celebs on the scene?

Everybody’s got a Dennis Rodman story. And these days, you’re always likely to run into reality stars: The guys from “Pawn Stars,” the “Jackass” crew and pretty much all the ladies from “The Real Housewives of Orange County” have stopped by at one time or another.

On the 2012 article: You know the night’s getting good if you end up at the Dirty Bird. The Sandpiper Lounge reopened in May after more than a year of closure due to the pandemic and we’d like to raise a glass to its continued survival. This article captures the beloved dive bar’s legendary stories.