Broadway by Amar Santana continues to lure in locals with a constantly changing menu of adventurous seasonal cuisine. 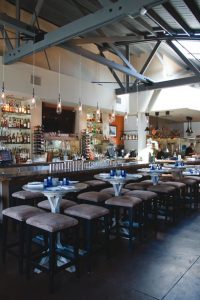 When Amar Santana and his business partners Ahmed Labbate and Rich Cadarette opened Broadway by Amar Santana last summer, the inspiration was Amar’s native New York City. He wanted to create a place where guests could “come in, sit down and enjoy the show.” Amar says Broadway brought to Laguna something completely different, and like a night in New York City itself, an evening at Broadway is never the same.

The open kitchen complete with front row seats at the chef’s table provides a live show of dinner in the making. The industrial design with a high ceiling creates an open feeling, inviting everyone to one big party. “I basically want to create a comfortable atmosphere,” Amar says. Locals have welcomed Broadway, making for a loyal base of customers. “We have a lot of repeat customers,” he explains.

His new restaurant venture allows him to change the menu every couple of weeks, which wasn’t such an easy task when he worked for more corporate restaurants (Amar was previously the chef at Charlie Palmer’s in South Coast Plaza). The cuisine at Broadway is described as “modern cuisine of the Americas,” or progressive American, and is inspired by local and seasonal ingredients. Amar prefers to have the latest and best ingredients in front of him as he works on an upcoming menu.

The best part of a trip to Broadway is that you’re sure to experience food in a way you haven’t before, keeping customers guessing and coming back for more.

Tip: Those looking for additional vegetarian or gluten-free options need only ask. The chef will be happy to accommodate.