Most cooks have dabbled with putting wine in a recipe—maybe adding a splash of chardonnay, deglazing a pan with sauvignon blanc or preparing chicken Marsala. But at several restaurants around town, chefs are reaching for harder types of alcohol to add another level of complexity to their culinary creations.

Mixing liquor into the sauce kicks it up a notch, intensifying the natural taste of ingredients. “We use a great deal of different fortified alcohols in our cooking,” says Joshua Severson, executive chef at Selanne Steak Tavern, noting that the sugars in alcohol amplify the profiles of certain foods. When heated, most of the alcohol burns off, but sometimes a bit of leftover flavor adds another dimension to the dish.

Marc Cohen, executive chef and owner of Watermarc Restaurant and 230 Forest Avenue, says the key is to treat liquor as a tool to elevate an already standout recipe. “I think the most important thing, first, is the quality of the … main item that you’re utilizing, whether it’s seafood, meat or vegetables as the center of the plate,” Marc says. “And then the idea is to enhance those flavors, not to mask those flavors.”

Each type of alcohol lends itself to bringing out the characteristics of a specific kind of dish, from bold entrees to subtle desserts, finessing them into something even grander. “It’s really used to accompany an item, not to overpower it, so you have to use it lightly,” Marc says of this finishing ingredient.

From tequila to gin, here are a few eateries across town allowing diners to enjoy their liquor with a knife and fork rather than in a glass.

At 230 Forest Avenue, the clear spirit plays a role in a small plate: oysters on the half shell with vodka and pomegranate granita.

“[To make the granita mix], we use pomegranate juice, pickled ginger, fresh-squeezed lemon juice, simple syrup, vodka and lemon zest,” Marc explains. As the mixture freezes, it’s shaved into a consistency somewhere between sorbet and shaved ice; then, a little spoonful of the cold concoction is added on top of each shucked, farm-raised oyster (typically from Washington state). The vodka helps to bring out the flavor of the shellfish while the sweet-tart flavors of lemon and pomegranate—in season during the fall—also complement the dish. (949-494-2545; 230forestavenue.com)

Another indulgent dish incorporating liquor can be found at Watermarc. The signature entree, Filet Three Ways, features filet mignon prepared in a trio of styles: Oscar, with lump crab, asparagus and bearnaise sauce; Wellington, wrapped in a puff pastry with mushroom duxelles; and Diane, with peppercorn-brandy sauce. The latter preparation features the cut of meat in the center of the plate with a Vidalia onion ring and the peppercorn-brandy sauce, created by flaming off the alcohol following a shallot reduction. “[The brandy] just kind of gives it a wonderful finish to the sauce,” Marc explains.

“When we first opened Watermarc … the idea of that restaurant was to give the customer an opportunity to enjoy multiple flavors on one plate instead of committing to a $34 dish that was all the same thing,” he adds. “So that’s where this dish came from.” (949-376-6272; watermarcrestaurant.com) 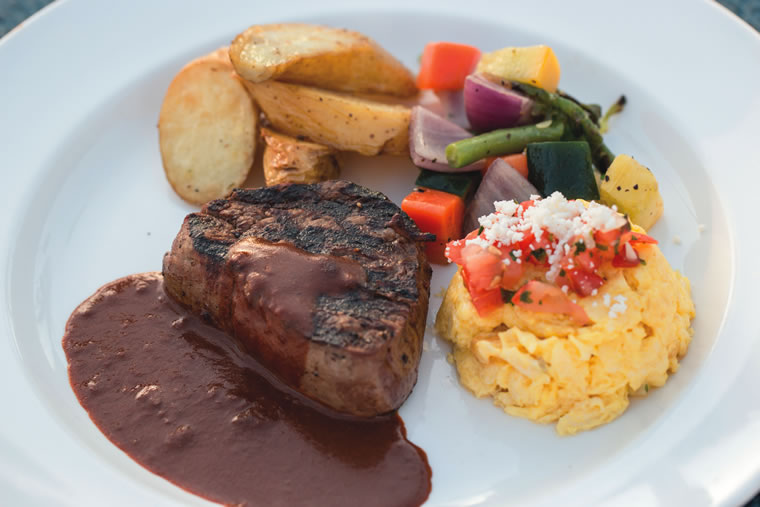 Tequila is in the mix at Las Brisas, where it’s part of the Bordelaise sauce served with filet mignon and scrambled eggs for Sunday brunch, says Johannes Bernau, specialty group executive chef at Real Mex Restaurants, which owns Las Brisas. Filet and eggs is the restaurant’s version of the traditional American breakfast dish, steak and eggs, while the sauce puts a new spin on the French classic that combines bone marrow, red wine, butter, shallots and demi-glace. “It’s one of my favorites to make and eat,” Johannes says. (949-497-5434; lasbrisaslagunabeach.com)

For desserts, chefs are turning to bourbon as a liquor ingredient of choice. With notes of vanilla and caramel, it’s a natural pick for adding complexity and enhancing the flavors of a variety of sweet indulgences. At K’ya Bistro Bar, the banana pecan bread pudding with bourbon sauce tempts diners. The enticing dish is served warm alongside a scoop of vanilla ice cream. (949-376-9718; kyabistro.com)

And at Broadway by Amar Santana, the popular bourbon vanilla bean panna cotta has remained a signature dish since the restaurant opened—despite the oft-changing menu.

For this sugary treat, the bourbon-infused, creamy vanilla bean custard is drizzled with strawberry and tarragon sauces, sprinkled with chocolate pearls and then topped with a scoop of strawberry sorbet, tarragon leaves and lime-infused strawberries for a red-and-green artistic presentation that’s a feast for the eyes as much as it is for the palate. (949-715-8234; broadwaybyamarsantana.com)