A life-changing head injury led artist Stephanie Bachiero to discover the incredible depth of her artistic talents.- By Daniella Walsh 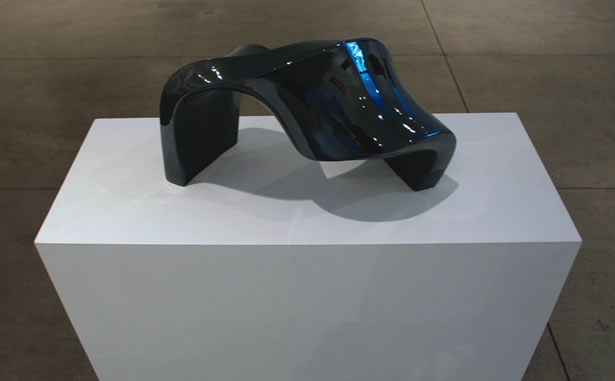 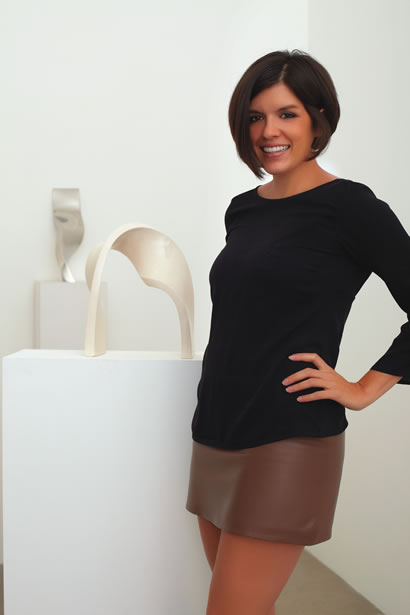 During a recent sun-soaked Laguna afternoon, sculptor Stephanie Bachiero was at work in her hillside studio, putting some finishing touches on a batch of works ready to be fired in her electric kiln. With her brow furrowed in concentration, she smiled slightly, immersed completely into her element.
Porcelain, rather than ordinary clay, is her medium of choice and one that she’s unreservedly passionate about. It’s a temperamental one, difficult to work with and demands more patience than clay, but none of that dissuades Stephanie one bit.
Stephanie uses porcelain to form the elegant, seemingly undulating, minimalist sculptures that art connoisseurs took note of during the 2010 OsCene exhibition and the 2010 Palette to Palate fundraiser at the Laguna Art Museum.
Twisting and turning, her graceful sculptures have the deceptive appearance of weightlessness, countered by being double attached to a platform and/or a wall. “The pieces reflect my need for control, order and to connect with my environment,” Stephanie says.
“Stephanie belongs to a younger generation of artists who, looking back at the 1960s and ’70s, are inspired by minimalism and the Finish Fetish movement,” says Grace Kook-Anderson, curator of contemporary art at Laguna Art Museum. “She chose a hard-to-control medium that reflects the challenges she has had to face in her life, but she also brings intellectuality, a sense of playfulness and sensuality into her work.”
Current Laguna Art Museum board president, Robert Hayden III, and his partner, Phil Silver, count themselves among Stephanie’s earliest collectors.
“Stephanie brings hard-edge, Finish Fetish to a new level by tweaking forms into a push-pull dynamic,” Robert describes. “We are really lucky to have artists of her caliber working locally.”
Given that relatively few women have embraced minimalism (painter Marcia Hafif comes to mind), her works are often included in shows at the Peter Blake Gallery and at the Royale Projects in Indian Wells, near Palm Springs. They have also been juried into the New York Armory show and the VSA (The International Organization on Arts and Disability) at the Smithsonian Institution in Washington, D.C.
“I am absolutely passionate about ceramics—about porcelain in particular,” Stephanie says. “Porcelain is my life and a metaphor for the fragility of life.”
Fragility of life is something Stephanie knows all too well. While she is now one of the area’s acclaimed emerging artists, she does not take her success for granted, instead crediting her family, friends and supporters (four-year partner Peter Blake among them) for helping her cope with profound personal and artistic challenges.

Stephanie was born in Torrance in 1982 to Ann Bachiero, a teen mom who raised her daughter while continuing her own education. When Ann married, her husband adopted Stephanie at age three. Educated in parochial schools, she evolved into a self-confessed perfectionist who thrived in advanced placement classes and, even as a teenager, clamored to get out of Southern California and into the staunchly rigorous intellectual and cultural climate of the Northeast. In 2000, Stephanie entered Boston College, intent on earning a Bachelor of Arts degree in communications and art history (after a short flirtation with political science). Then, she planned to earn a law degree from Columbia University.
Barely 21, she also excelled as a licensed Realtor. “I saw a market and mined it,” she says. “College was easy anyway and my business even more so since the city was full of students who either needed places to rent or whose parents wanted to buy an apartment for them,” she explains. “Being a Realtor would also come in handy to pay for law school later.” 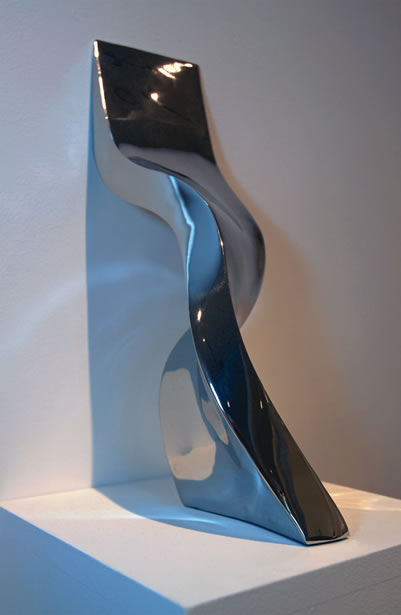 Fate had other plans. In August of 2003, Stephanie went to visit a friend who lived in one of the narrow, three-story brownstones that are typical of student housing back East. To her surprise, there was a party and she decided to join in. Immersed in music, laughter and libations, she sat, as she recalled, on an open window ledge, and that’s the last she remembered before finding herself at Tufts-New England Medical Center with head injuries traumatic enough to have made even experts wonder how she survived.
She had fallen three stories to the pavement. The ensuing medical consequences of that fall are too numerous and horrific to fully detail. Suffice to say that she had an arterial (brain) aneurysm, suffered three strokes and had at least two open brain surgeries. She spent three months in the hospital and survived, left with the capacities of a baby.
Her neurological surgeon, Adel M. Malik, writes, “It was with utter amazement that I and my clinical colleagues saw Stephanie back in follow-up approximately two years after her initial trauma.” They were surprised to see her walking again, speaking and understanding others thanks to miraculous progress.
Stephanie underwent further rehabilitation to restore physical coordination and verbal expression. Today, she continues to practice formulation and connection of her thoughts while concentrating on her art. She still has trouble at times forming continuous thoughts and expressing them verbally. Writing presents its own challenges, she adds.

Back at the studio and covered in dust, the 29-year-old is surrounded by sculptures roughly two feet long in various stages of finish. Smoothing an about-to-be-fired porcelain plank with a block of sandpaper, she sees lumps and bumps imperceptible to an ordinary eye that she banishes before firing and glazing the piece with one of her signature white, beige or metallic hues.
At the time of the accident, Stephanie had one class left to graduate and needed to come up with her senior thesis. But, once sufficiently recovered to travel, she returned to California and took classes at Saddleback College to get her brain to function again, she says. There, under the tutelage of instructor Richard White, she fell in love with ceramics.
“I was aware of her physical limitations, and felt I had to nurture her since I saw the frustration that she felt while being unable to express herself verbally,” Richard says. “Even though it was sad to watch her at times, she also showed an incredible attitude and was a joy to teach.
“Clearly, she had chosen ceramics to express the things she could not formulate verbally,” he adds. “Now, she’s come out on top, and I doubt that there’s anything artistically that she could not do once she sets her mind to it.”
In 2007, still in the process of “rewiring” her brain, Stephanie returned to Boston and finished her degree requirements. “I only needed one more class but altogether I wound up taking four,” she says. “They could have waived the senior thesis but I felt that, even though I could barely write, I had to earn my degree.” While there, she also perfected her ceramics skills by earning a post-baccalaureate degree from the School of the Museum of Fine Arts through independent study.

Observers will note that Stephanie’s pieces seem to undulate, while they’re often restrained by being connected to a platform or wall. “I am still thinking about connections, about how to express myself in a successive manner, how to make people understand,” she explains. “Sometimes I think that my sculptures represent the kind of thinking that I would have used as a lawyer. Things have to be understood, have to be followed logically to make sense.”
Such discipline serves her well when first shaping the porcelain, a slow-drying medium that she describes as one with a mind of its own. The process involves rolling it out with a rolling pin and shaping it into the desired form, standing up or laying down, with a curve curling upward or perhaps bridging space. But, given that the stuff takes eons to dry, it will sag and form itself according to laws of gravity rather than Stephanie’s will. Until a piece is dry enough to be fired, she has to practically babysit it to keep it in line. “It’s a frustrating process at times, but that too helps me establish control over the piece and, by extension, over my own abilities,” she says.
Stephanie works to music, but unlike other artists who prefer pure sound to distracting words, she enjoys intricate, demanding songs. “The music also helps me connect my thoughts with what I am hearing and concentrate on my work,” she explains.
She worked in a small, rented garage in South Laguna that’s a short distance from the home she shares with Peter Blake but is now looking for a larger space. Gradually, she says, she has come to see gallery work as a new avocation. “I love designing shows and hanging art. Some find it challenging, but I just see it as an extension of creativity—my own and that of the artists we are showing,” Stephanie explains.
Continuously working at gaining back what she lost, Stephanie does not cut herself any slack, but instead has found a deep joy in making art. “Through sculpture I can restructure the life I lost intellectually. I still have this isolation in my mind, but I can have conversations with the porcelain as it moves. It’s the two of us engaging.”   LBM