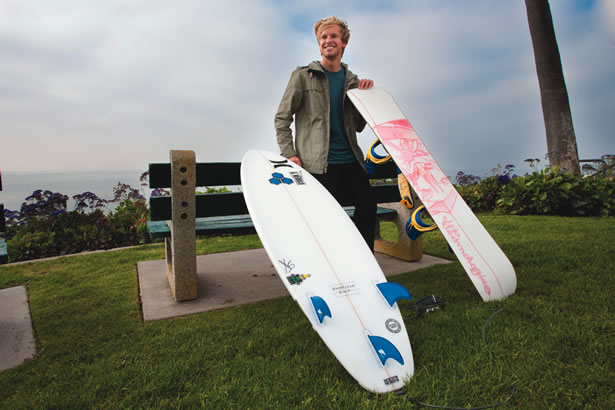 “Surfing and skating always came very natural to me, and when I started snowboarding when I was around 10 years old, it didn’t feel any different,” explains Eli Viszolay, a former professional surfer and Abercrombie and Fitch model. A Laguna Beach High School graduate, he grew up surfing Laguna at Brooks Street and boarding at Big Bear Mountain. Eli now works for Hurley, where he manages the young riding team and still heads to Big Bear whenever the weather permits. He also performs with his sister in their band, Questions.

LBM: You’re well known in the surfing industry, but how did you get into snowboarding?
Eli: I got into snowboarding only from surfing and skateboarding as a kid. When I was young, I just wanted to be good at every board sport possible, so I started timing it season by season. In the summer, surfing, and in the winter, snowboarding (and still surfing).
LBM: Favorite tricks?
EV: The second time I ever went snowboarding, I was attempting rails and jumps. After my third time, I had all the basic air grabs down and could also go on any rail or flat box (features often found in ski and snowboard parks that boarders use to slide down and create freestyle maneuvering tricks.)
LBM: Favorite local mountain?
EV: Big Bear, especially during the week when it is less crowded. The park at Bear Mountain has Southern California’s only superpipe and has a ton of rails, boxes and walls.
LBM: Any tips for those new to the sport?
EV: Go out there and try everything—after all, it’s just snow you’re landing on.
LBM: What are some of the must-have pieces to enjoy the sport?
EV: Skin-tight spandex or leggings under warm clothes, gloves, board, boots, beanie and a buddy.
LBM: As a snowboarder, what should you never forget?
EV: Always have chains and know how to put them on before reaching the mountain.
LBM: Good tip. Have you had any bad experiences with chains?
EV: One time I was on my way to Big Bear and found out the roads were closed. We drove another 11 hours to Mammoth in the middle of the night. Three-quarters of the way there, we were stopped because of a heavy blizzard and needed to put on chains. I had never put on chains before and had to try attaching them for my first time in the blistering cold. It was so cold that every three minutes I’d have to go back in the car to warm my hands up again. After about 50 attempts and an hour, I got the chains on. Even though it was the worst journey getting there, we got really good snow and had a blast on the slopes.
LBM: And your favorite riders?
EV: Luke “Dingo” Trembath and Olympic gold medalist Shaun White.

Hit the slopes in style with the latest winter wear.
Whether you’re working on your tricks, riding in the backcountry or still conquering the bunny slopes, when it comes to ski and snowboard gear, the best pieces have just the right combination of quality, performance and style. And remember, besides a great attitude, perhaps the most important thing to bring on the mountain is a helmet. It will keep you safe and just might give you that extra confidence to test out a new run. LBM 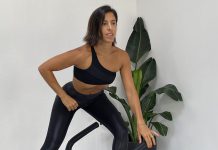 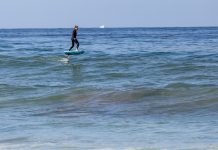 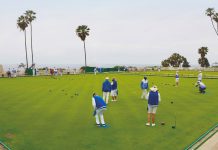