Approaching its 15th year in town, Sushi Laguna has perfected the art of fresh, simple dishes—with a few surprises.

Sushi, a Japanese staple, gained popularity in the U.S. in the 1980s. As Americans became familiar with terms like toro, sashimi and uni, a young Japanese chef named Jay Sada moved across the Pacific with the goal of bringing his sushi skills stateside. More than two decades later, his restaurant, Sushi Laguna, has become a local favorite—both for the expertise of its owner and the quality of its dishes.

Jay is committed to using the freshest ingredients on his sushi menu. In fact, if he thinks you’re up for it, he may even run to the kitchen and emerge with a live giant shrimp. The clink of a glass and one swift motion from the chef are the only warnings before he sets the shrimp’s head, perched in a bed of ice, in front of you. Those with a sense of adventure are encouraged to slurp out the brain—Jay says it’s one of the

most delicious things you can eat. But for the rest of us who are left wide-eyed, he’ll instead prepare the tail on rice with a squeeze of lemon. The slight sweetness and clean flavors are evidence of the seafood’s quality.

For diners who aren’t tempted by that particular delicacy, Sushi Laguna offers an extensive selection of innovative rolls. Jay specializes in simple, healthy combinations that often boast an unexpected texture or flavor. The Maui roll, for instance, is one of the eatery’s most popular orders and packs some heat thanks to jalapeno, but it’s the Cajun-spiced tuna that really adds depth and smokiness. In addition, the roll gets a pleasant crunch from the panko-fried onion inside.

For a rice-free option that’s also packed with veggies, try a colorful cucumber wrap layered with asparagus, sprouts, avocado and your choice of fish—Jay notes that salmon or tuna are the most popular. A side of ponzu sauce and fresh lemon add a citrusy kick. 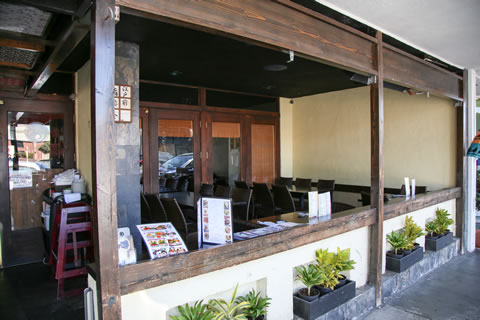 Sushi Laguna also maintains an ever-changing board of specials. One that will be a staple throughout the summer is the beautifully plated pink scallop, served in a clamshell. Composed of a single scallop topped with minced mushrooms and asparagus hidden under a creamy sauce, the small dish is then baked and finished with roe (fish eggs), scallions, a jalapeno slice and a dash of hot sauce.

If your cravings are for something other than seafood, Sushi Laguna also boasts a full dinner menu with additional entrees and appetizers such as chicken yakitori, and udon and ramen noodle soups.

No matter your tastes, this local spot has you covered. Arrive with an appetite and an open mind—Jay is sure to surprise you.

Tip: Snag a seat at the head of the sushi bar to chat with the chef and watch his skills in action.