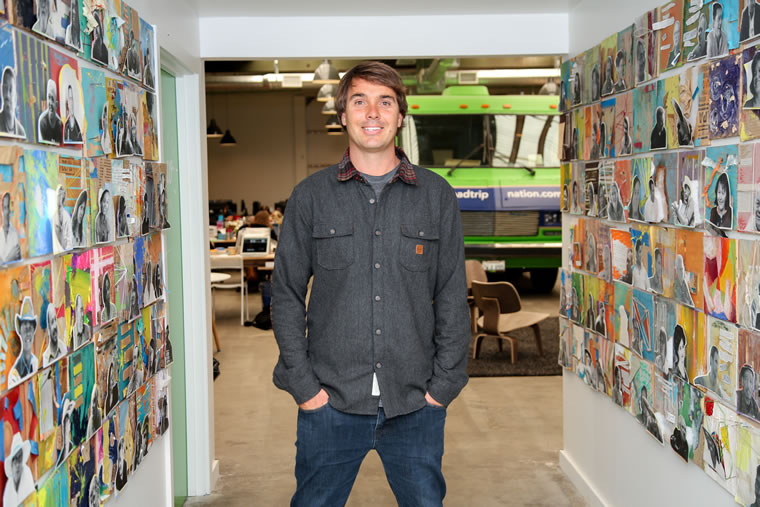 In 2001, recent college graduates Mike Marriner, Nathan Gebhard and Brian McAllister set out on a road trip across the country—but it wasn’t a celebratory vacation.

While the trio received quality educations, the career exploration process left them disillusioned. So during their final six months of school, they cold-called leaders from diverse professions—from lobstermen to Starbucks head Howard Schultz—to request interviews about how each found their paths in life. The road trip that followed consisted of one video camera, dozens of inspiring conversations and thousands of miles logged in a beat-up 1985 RV.

Since then, their quest has evolved into Roadtrip Nation, a Costa Mesa-based organization dedicated to helping people find career fulfillment. It includes for-profit and nonprofit arms, educational curriculum, a long-running PBS TV series and four books. The most recent, “Roadmap: The Get-It-Together Guide for Figuring Out What to Do with Your Life,” debuted in April and hit The New York Times education best-seller list in May.

Co-founder Mike is a Laguna native who still lives in the city with his family (he once shared a bus stop with co-founder Nathan when the pair attended Thurston Middle School). We caught up with him to find out how Roadtrip Nation guides people down their “roads.”

Laguna Beach Magazine: Was there one particular experience during your road trip that has really stuck with you?

Mike Marriner: We interviewed a guy in Burlington, Vt., who founded an ad agency and design firm. … He said—I’ll never forget this quote—“When you magnify what it is you believe in, the world conspires to support you on your path.” The career center does not tell you that. It is so simple, but it’s just finding things you really believe in and then having the confidence to magnify it. When you put that out there, and if it’s true, then people will rally around you. And that’s what happened with Roadtrip Nation.

How is Roadtrip Nation’s approach to career exploration unique?

MM: So the traditional approach is you have tools like the Myers-Briggs test, which essentially reduces you down to [a few careers]. … We never tell anyone what they should do with their life because the number of pathways they could take is so expansive. Instead, give them a tool or a database or a resource where they can go explore, and let that exploration be guided by their interests and things they really believe in.

Can you tell us about your new book?

MM: It’s like a big ethnographic study of 12 years of Roadtrip Nation, of how people in the 21st century have discovered their roads in life. We’ve been running around America in our motor homes interviewing thousands and thousands of people from all different careers, all walks of life, asking them that one simple question: How in today’s world have you figured it out, and what are the insights you learned along the way? … What you’ll see [are] common insights backed up by real people’s stories. It’s an extremely eclectic array of voices and pathways, and it’s all organized around three core themes: let go, define, become.

Every book gets access to our full [online] content archive … so you can literally go explore. You don’t have to be in a school where Roadtrip [curriculum] is being done.

How do you hope the book will benefit students who are on summer break?

What aspect of Roadtrip Nation are you most proud of?

MM: We have the world’s largest media database of people talking about how they got to where they are today. … That database is a place where people can go to explore, even if they’re not going on a road trip across America. That’s like our great contribution to the world.

Can you share some of your goals for Roadtrip Nation?

MM: To refresh the entire career guidance space and be the big destination where people go to navigate, no matter what period they’re at in their life. … It is not just for students; we don’t define that Roadtrip Nation is for a demographic set of people—it’s for a psychographic set of people.