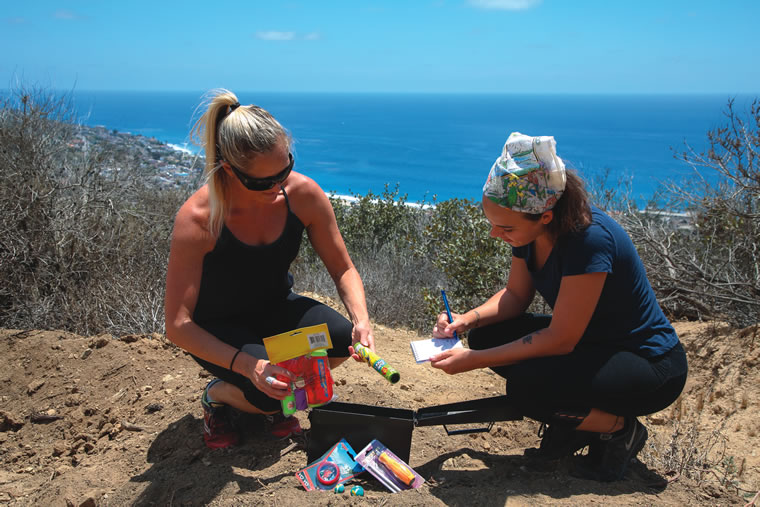 John Michaels vividly recalls his introduction to geocaching, a high-tech game that uses a GPS device to locate stashes of trinkets. While in Phoenix in 2003, a friend’s uncle asked John if he noticed anything unusual in his rock and cactus yard; he then pulled up a dummy sprinkler head and showed him a logbook tucked inside listing dozens of names of people who had tracked it down with information posted online.

“I enjoy the secrecy of the whole thing,” says John, now a Laguna Beach resident. “Going out and searching for hidden items people walk by every day without knowing it. … I’ve found some amazing hiking trails, vista points and campsites not found on any published trail guides.”

With rewarding destinations and hidden prizes, geocaching provides an extra incentive to explore the town in a new way this summer.

Dozens of caches exist in the Laguna Beach and Crystal Cove State Park areas, listed on websites like geocaching.com or opencaching.com with latitude and longitude coordinates, hints and difficulty level noted. To take part, all that’s needed is a handheld GPS receiver or GPS-enabled cellphone—although these are sometimes less accurate—and a sense of adventure. “If you like the outdoors, or liked playing hide-and-seek or pretended to be a pirate searching for treasure as a kid, try it,” John says. “It’ll bring the kid out of you again.”

The family-friendly hobby often takes participants on a nature trail or to an urban landmark with some historical significance or other interesting features, providing a fun way to learn about the community. “One of the primary reasons I cache is that it takes me places that I would not typically visit and it takes me to sites that I would not typically see,” shares Cliff Phipps of Portola Hills, who has been geocaching for eight years. He’s found more than 16,000 stashes and placed more than 300, including two in Laguna; one is called “Stairs to Nowhere” off South Coast Highway.

Another local cache, “Great Park View” in Laguna Coast Wilderness Park, was placed by Jeff Breit of Huntington Beach. He started the hobby on a camping trip three years ago and has since found nearly 4,000 caches and hidden more than 50 for others to discover. He recalls one search that took him to Heisler Park in Laguna; hints pointed out many art sculptures along the way, which Jeff says he might not have noticed otherwise. For Jeff, the geocaching journey is the treasure—although some do lead to actual prizes. 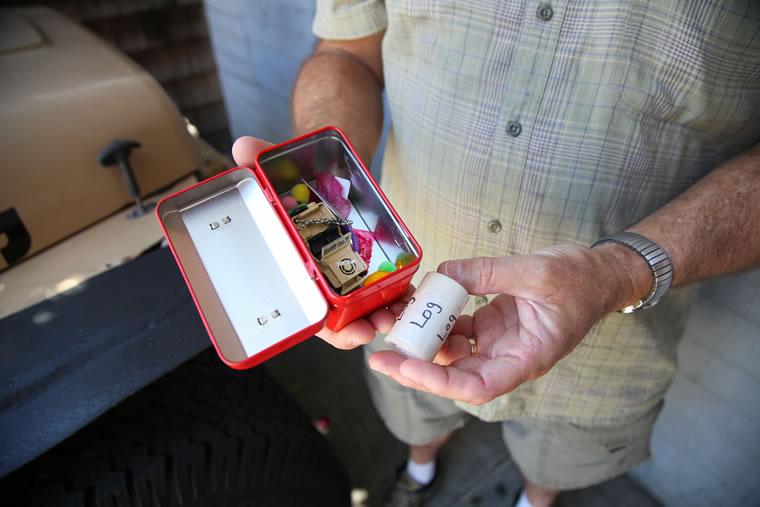 Caches range from small—such as a 35 mm film canister—which generally contain only a slip of paper to jot down your name, to larger containers filled with the requisite logbook and some small toys, stickers or other trinkets. Seekers usually carry their own items to trade for one in the box; the rule is to leave an object of equal or greater value than the one you take. There are also “trackables,” including Travel Bugs, which resemble military dog tags, and Geocoins, with a letter-and-number code that can be entered online to see where they have traveled as people take them and move them to other caches around the world.

For seekers, he offers this advice: Once you get about 10 feet from the location, put down the device. “Too many people get caught up in staring at their phone,” he says, adding that it’s best to rely on your eyes and common sense when you’re within range.

“If you like the outdoors, or liked playing hide-and-seek or pretended to be a pirate searching for treasure as a kid, try it. It’ll bring the kid out of you again.” –John Michaels

Notably, when geocachers are searching in an urban environment or along a busy trail, their behavior—looking in bushes and under newspaper racks—is sometimes considered suspicious. Jeff says he’s been stopped more than once by the police, but after explaining that he’s geocaching, they understand; one officer even helped him search because he was curious to see what the craze was all about.

The sport started 15 years ago, after the U.S. government allowed GPS technology to pinpoint locations much more accurately. Following this announcement in May 2000, a computer consultant named Dave Ulmer decided to test that accuracy by hiding a container in the wilderness and sharing the coordinates with an online group of GPS users. From that first cache, dubbed the Great American GPS Stash Hunt, the hobby has grown.

In the eight years that Cliff has been geocaching, he’s seen the treasure-hunting activity increase tremendously. “One of the biggest changes is the number of caches that are available,” Cliff explains. “When I first started, … you had to drive to find caches because there just weren’t that many available. Now there are so many, … they are in your own neighborhood.”

So, you’ve been bitten by the geocaching bug and are eager to hide your own cache in this real-world treasure hunt. First, search for a good number of them before placing your own to gain an understanding of what makes a good find. When preparing to establish a cache, here are some things to consider:

1. Choose a location without too many other caches in the vicinity and make sure it meets the guidelines of the website you’re using.

2. Make sure the spot is somewhere special that’s worth a visit—maybe it has a nice view or is near a landmark off the beaten path.

3. Select a site that’s not too close to busy streets or trails to avoid passersby from accidentally stumbling upon it.

4. Use a watertight container, and label it as an official geocache. Insert a logbook and lead pencil (pens can dry out) and optional trade items like small toys or stickers.

5. After positioning your container, use a GPS device to ascertain the coordinates, then double-check them on Google Earth before posting online. Write a description including difficulty level, type of terrain, time required, wheelchair accessibility and hints to help seekers.

6. Return frequently to check on your cache. Make sure the box is still there and in good condition, and that the environment isn’t being harmed by people looking for it.