Endless memories are packed into the school lunchbox, but gone are the days of Wonder Bread, bologna and Twinkies. Today new traditions are born with a healthier twist that often requires insulated containers for less processed food. Yet, regardless of the vessel or cuisine, a lunchbox meal fires up the desire to revisit youthful days—Watermarc recognized the pull of a fond memory by creating The Lunch Box, a dessert of homemade Ding Dongs with a small container of milk, presented in a metal lunchbox.

The packed-lunch tradition continues, and while the contents and container have been upgraded, a couple things remain the same: the personal touch of a homemade meal and handwritten notes tucked inside. We asked four Laguna Beach chefs to recall what they found in their school lunches, and how what they pack today helps them meet the challenge of pleasing their most important customers—their children.

“Mom was always up early to pack the lunch every day,” says Watermarc owner and Executive Chef Marc Cohen. He recalls peanut butter and jelly sandwiches or last night’s fried chicken as the normal fare for his Baltimore, Md., to-go meals. But he also remembers crumb cakes, Ho Hos and mom’s little notes: “Things will always work out,” or “Good luck on your test.”

He and his wife also included notes of encouragement for their three children—now in their teens—as they grew up in Mission Viejo. It was mostly brown bag meals in kindergarten, and by first grade they carried themed lunchboxes such as Star Wars. But while the containers evolved, the parents maintained a consistent approach to the cuisine: “We stay away from sweets and candy, and include more fresh fruits and vegetables as well as fewer chips and less salt,” Marc says of his kids’ to-go meals. The nutritious alternatives include grapes, strawberries and hummus.

As a chef, Marc says he begins work at 10 a.m., so he can prep the lunches. In addition to promoting healthy eating through what he packs for his children, he encourages them to grocery shop. “Kids should see all the fruits and veggies available,” he says. “It helps develop a bigger palate and expand the lunchbox experience.”

Sapphire Laguna owner and chef Azmin Ghahreman brings a global perspective to the meal. Basically, there was no lunchbox in sight as he grew up. Born in Iran, he went home for lunch break. In Paris, at age 7, he was exposed to a three-course meal program. At 16, he moved to the neighboring European country of Switzerland, which had a similar lunchtime routine. One of his favorite foods  from that time (and to this day) was celeriac remoulade (shredded celery root with Dijon mustard and mayo, lemon juice, salt and pepper). Another was a treat similar to a chocolate croissant. “It was the best part,” he says.

His four children have a more U.S.-centric lunch experience, carrying insulated, compartmentalized lunch packs on the days they have meals assembled by their mother, Laura. The containers are reserved for nutritious snacks such as grapes, carrots, apples and Azmin’s home-fried tortilla chips. Azmin says that there’s a great reward in preparing your kids’ lunch: “You must put attention into your kids’ food.”

Each child has his or her favorite items: Liam, cheese roll with prosciutto and uncured salami; Rori, Persian chicken kabobs; Roan, Caesar salads; and Cosmo, berries. Azmin says that his youngest, Cosmo, “is so proud carrying his own lunch bag.”

Ahead of the Times

Laguna Beach born and raised, Lindsay Smith-Rosales, executive chef and co-owner of Nirvana Grille, grew up with a vegetarian mother and father. “My mother fed us very healthy at a time when it was not so cool,” she says. Her school lunches consisted of such items as raw cheddar cheese, organic beans on a sprouted wheat tortilla, or tofu with veggies and olive oil.

“It definitely was not food that anyone at school would want to trade with,” Lindsay says.

Today, Lindsay continues the nutritious approach as she packs her 7-year-old son Diego’s favorites in an insulated lunch pack with a zipper (unlike her metal, Chinese-style lunchbox). Inside his pack, sealed in Tupperware, are items like roasted yams with a bit of butter and feta and seasoned with Spike; apples; hummus and crackers; various pastas; and an avocado, cheese and lettuce sandwich with mustard and mayo.

Since Lindsay also assists at Diego’s school in Aliso Viejo, she has the opportunity to drop off a fresh meal. As far as who prepares it, she says it’s a 70/30 split between herself (70 percent) and husband Luis Rosales, co-owner of Nirvana. When she packs it, the lunch comes with a request from Lindsay. “I ask him to do two things for me: take time to eat until he’s full and to eat at least half of his lunch.”

In addition to making lunch, she believes in talking about it with her son, discovering what he didn’t like and why. She also communicates by including encouraging notes in the lunch. “I’m making sure Diego eats things that we as a family would eat,” she says.

K’ya Bistro Bar chef Craig Connole remembers his mom’s brown bag lunches—usually a bologna, salami or ham sandwich with American cheese and Miracle Whip, with a bag of chips thrown in. “By the time I ate it, it was room temperature and not great,” he says. “I don’t have the fondest memories of my sack lunches.”

He recalls eating them with his cousin at their Newport Beach elementary school. “He would eat the school lunch from the cafeteria, and I always wanted what he had—tacos, fish sticks, pizza, spaghetti and hamburgers.”

Craig’s teen son, Jack, has only had two school-made meals in his life; both times it was pizza, and he wasn’t impressed. But considering what he’s accustomed to, Jack’s reaction isn’t all that surprising. “Since first grade he has had a hot lunch packed in Thermos [containers], usually pasta, rice dishes such as stir fry, or chicken or fish over rice with a sauce,” says Craig, noting that he and his wife both make the lunches.

Sapphire at School: Thinking Outside the Lunchbox

The Sapphire at School lunch program, founded by Sapphire Laguna owner and chef Azmin Ghahreman, has added four more Orange County schools, including St. Catherine of Siena Parish School in town. The program aims to nourish and educate young people to achieve a lifetime of well-being, based on a Mediterranean diet of fresh fruits, vegetables and whole grains. The other three schools are Harbor Day School in Corona del Mar, The Parish School at St. Edward the Confessor Catholic Church in Dana Point, and Santa Margarita Catholic High School in Rancho Santa Margarita, for a total of 8,000 children served at 11 schools this year. (sapphireatschool.com) 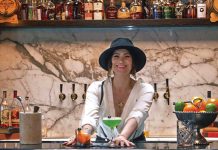 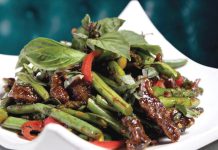