Early one morning in May 2014, a woman was out walking her dog when she heard glass shatter. Curious, she walked around the corner to investigate the noise and discovered burglars breaking into a business. The quick-thinking Laguna resident snapped a photo of the vehicle with her cellphone camera, called the police and provided a description that allowed authorities to track down and arrest the criminals in Dana Point.

Following this successful citizen involvement, Natasha Hernandez, a community services officer with the Laguna Beach Police Department, was intrigued when she heard about an effort called Dog Walker Watch. The initiative, started by the Pennsylvania-based National Association of Town Watch—the organization behind National Night Out events that bring the police and community together—has been catching on in various cities across the country as a way to get more people actively on the lookout for suspicious activity.

Laguna’s effort began with more than 20 people attending a training session at Alta Laguna Park this past May. For those who want to help authorities collar criminals while strolling around the neighborhood—with or without canines—more workshops will be announced in coming months. For more information, call the police department’s business line at 949-497-0701 or email Natasha at nhernandez@lagunabeachcity.net. 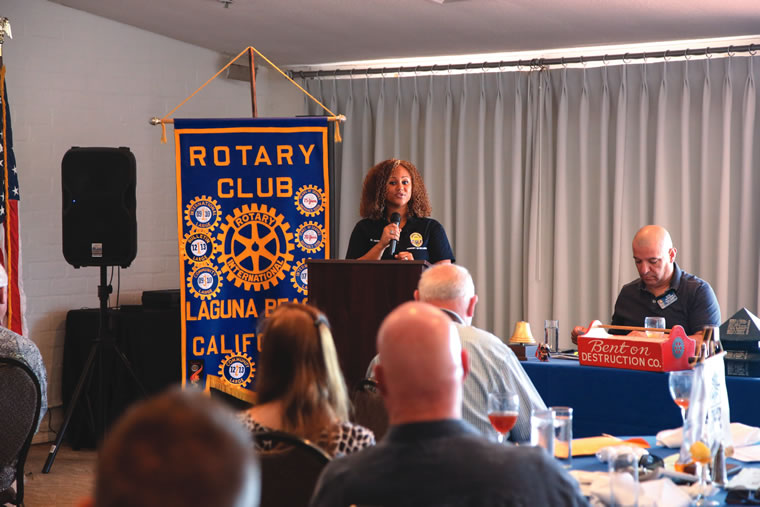 Laguna Beach Magazine: How did the program come about?

Natasha Hernandez: I was talking with a colleague from Placentia [Police Department] … and she told me about this program because we have a neighborhood watch—we’re really trying to revitalize the program and regain interest—and so she told me about Dog Walker Watch.

Why is it beneficial to enlist dog walkers in crime prevention?

NH: Because they’re out and about at all hours of the day. You have dog walkers that come out in the morning, in the afternoon or late evening hours when they have to take their animals to the restroom. And those are the times when things are often occurring, so they have that opportunity to see something and react and to help us. And we always tell them if they see something to observe from a distance. We don’t want them to put themselves in harm’s way.

Who can get involved in this?

NH: It’s for the average citizen. … As long as they’re out in the community, we just want them to be able to observe and report information to us. Dog walkers have a normal routine, a normal path of travel, so they’re able to detect what’s normal, what’s not normal. And if they see something, we want them to say something. … Call the nonemergency business line. If it’s something in progress, then they can call 911.

NH: In training, we go over suspicious activity, what it is. We talk about the different behaviors—because it’s not necessarily the person, but it’s their behavior, what it is that they’re doing. We go over suspicious vehicles. … And then we talk about calling the police department, how to report the information to us and what information to get. And then we will also go over crime trends and statistics … to make them aware of their surroundings and to be more aware of what’s going on.

Are you trying to reach certain neighborhoods or is this citywide?

NH: It’s citywide. Anyone can come. … I always tell people, we wish we had officers on every corner, but unfortunately we don’t and so we have to have the community’s involvement to act as an extra set of eyes and ears to help us.

What are the participants looking out for specifically?

NH: I will tell them to watch what … [any suspicious people] are doing. … Are they looking at somebody’s home, around the property? Are there two of them? Sometimes it’s people acting as solicitors and there’s one person going up to the door to check and see if anybody’s home while somebody else is kind of peering around the sides of the home. [And] looking for occupied vehicles: If people are sitting in a car [for] maybe 10 minutes in an area—maybe the car is idling—what’s the purpose of them being there? Just call us. And even if you’re not sure if it’s something, we want to know before it turns into something. … We can send an officer out to patrol that area.