Local chefs take their creativity beyond the plate, explaining the inspiration behind their personalized body art. – By Debbie Lavdas | Photos by Jody Tiongco 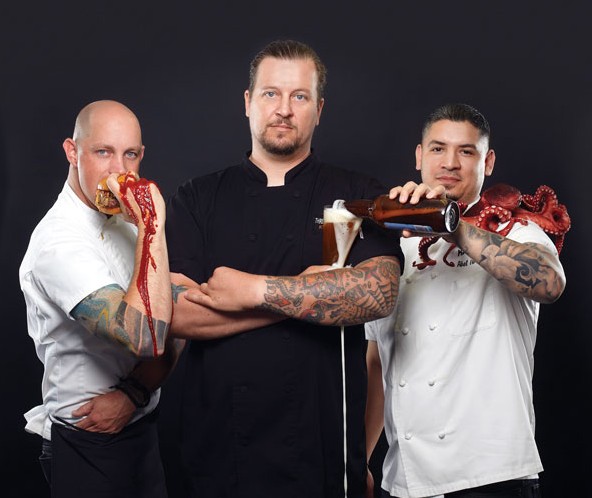 In the old days, the saying was, “Never trust a skinny chef.” Now an un-inked chef may be the one in question. Have you noticed how the majority of chefs in town, from Umami Burger to The Beach House, seem to be tattooed? Sneak a peek in any gourmet kitchen, and you’ll likely see a head chef’s full sleeve of tattoos as meticulously done up as his beautifully plated cuisine. So are chef tats now as accepted as a badass Anthony Bourdain getting his own show on CNN? Are these culinary artists simply hungry for more creative canvasses? Perhaps it’s all just part of the new rock star chef persona? “Chefs, in general, are expressive in the dishes they create,” Chef Ryan Adams of Three Seventy Common Kitchen + Drink says. “This is another form of expression.”

Chef Abel Vargas IV of Katsuya by Stark says his ink is indeed art. “I took images from Leonardo da Vinci and Michelangelo. Their work represented their forward thinking and nonstop work ethic.”

Other chefs describe how their tattoos point to a kind of inner pirate lifestyle: cut-up, burned, tattered, little glory and lots of moving around. “We’re like the head of the ship,” says chef John Herndon of Umami Burger. “We work really hard for our art, but most chefs are stuck back in the kitchen and don’t get to experience guest reactions. Tattoos create individualism. We crave that kind of attention and notoriety.” Different slants, different chefs and a whole lot of ink—here, we got some insight from eight of our skin-scribed chefs. 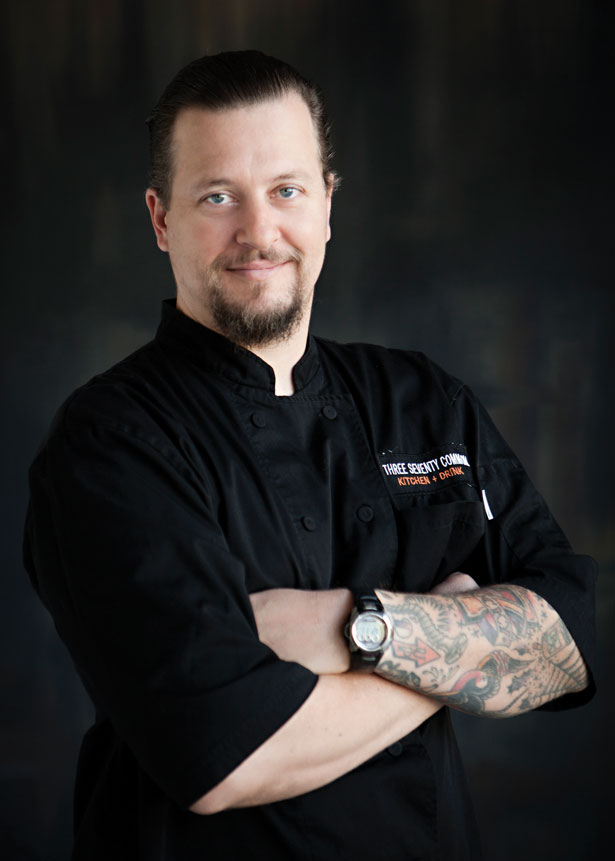 You won’t see the Weber grill tattoo on his chest, but you’ll see his sleeves of tats as he works in his black, double-breasted, short sleeve chef jacket in his open kitchen.

Ryan Adams, a graduate of California Culinary Academy in San Francisco, honed his skills at various restaurants in Chicago and New York and is now the chef and owner of Three Seventy Common. Want to get him to smile? Ask him about his tattoos; he lights up like his Weber that’s flame-grilling a steak. “This is one of my favorite tattoos. It was inspired by a friend’s dad who said, ‘Every man needs a Weber Kettle.’ I now have a Weber for life,” Ryan says. His latest ink? “I was inspired by a picture out of a chef Martin Picard cookbook of a one-eyed, one-legged pig dressed in 18th century garb drinking a beer. When I saw it, I knew I had to get that tattooed on one of my forearms.” Picard’s restaurant, named Au Pied de Cochon, means “the pig’s foot.”

Ryan also dishes on a tattoo on his leg that a friend freehanded. It depicts a giant blue, naked, devil-esque woman with a chef’s knife and a chef’s hat. “I’m not sure where his inspiration came from, but we’ve nicknamed it Chef Death,” he says. He says collecting food-related tattoos shows off what chefs are passionate about. 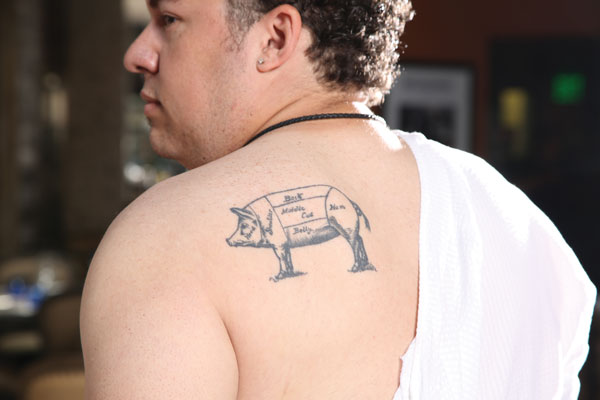 Chef Amar Santana has one pig tattoo on his back, and he employs many full-sleeve inked chefs in his kitchen. He plans to get more tattoos and has been thinking lately about getting an apple on one arm and an orange on the other. “The apple for New York, the orange for Orange County—two places that have meant a lot in my career,” Amar says.

“Chefs are very proud of what they do, so they want to show it in ink form. About 10 years ago, chefs used to cover their tattoos before going to talk with a guest in the dining room, and it was kind of a big deal, but these days, it’s about an art and a passion for cooking, and chefs really want to show them,” he says. Oh, and why the one pig tattoo? “It was my last day at Aureole (Charlie Palmer’s flagship in New York, where Amar got his start), back in New York, the kitchen staff gave me a gift certificate to a tattoo shop and a picture of a pig. I went to the tattoo place and got it done the same day,” Amar says. If you dine at Broadway by Amar Santana, you’ll find plenty of pork on the menu. 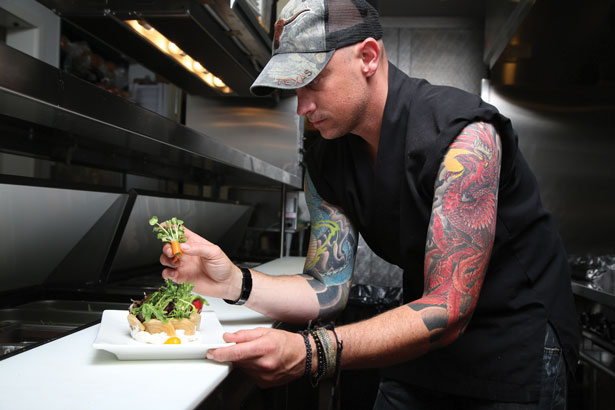 “Tattoos almost go with the culture around here,” says chef John of the Umami Restaurant Group, which recently opened the Laguna Beach location of Umami Burger.

“Chefs speak through our food and our body, so tattoos are another way we can stand out and make our art known,” he says. John’s tattoos are sushi-cut style (three-quarters in length). Interestingly, he points out that in Japan, the only jobs the Yakuza (criminals and social misfits) could get were chef jobs since their full-body tattoos stopped where a chef’s coat rolled up.

All of his tattoos have stories behind them. “I have this dragon that represents perseverance, and this phoenix represents rebirth and rising from the ashes. Between them, it’s inspiration to keep trying no matter what,” he says. “You can’t let the world get you down. Perfection is never achieved, but always hoped for 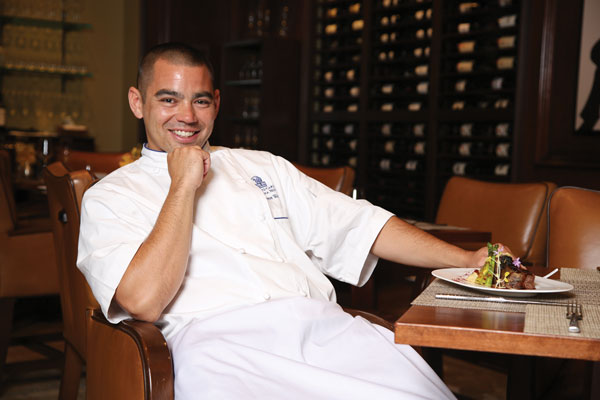 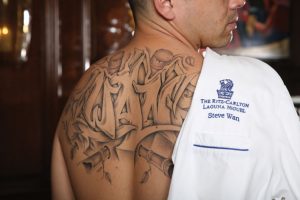 Chef Tournant Steve Wan works in all areas of the kitchen at The Ritz-Carlton, Laguna Niguel. He’s also a commissioned graffiti muralist for the City of Los Angeles and has worked with some of the most progressive and well-known LA-based muralists.

“Whether on a plate, canvas, wall or expressed on my body, I love to express my creativity,” Steve explains.

He proudly has his last name tattooed in graffiti-style lettering across his back and says it points to his Chinese heritage and love of graffiti art culture. “Guests never see my tattoo, and I kind of like that,” Steve says. More tats are on the front burner too with his plans to soon add flames and a sauté pan on his back to represent his passion for cooking. Steve and an artist friend plan to create the culinary tattoo as they go along. 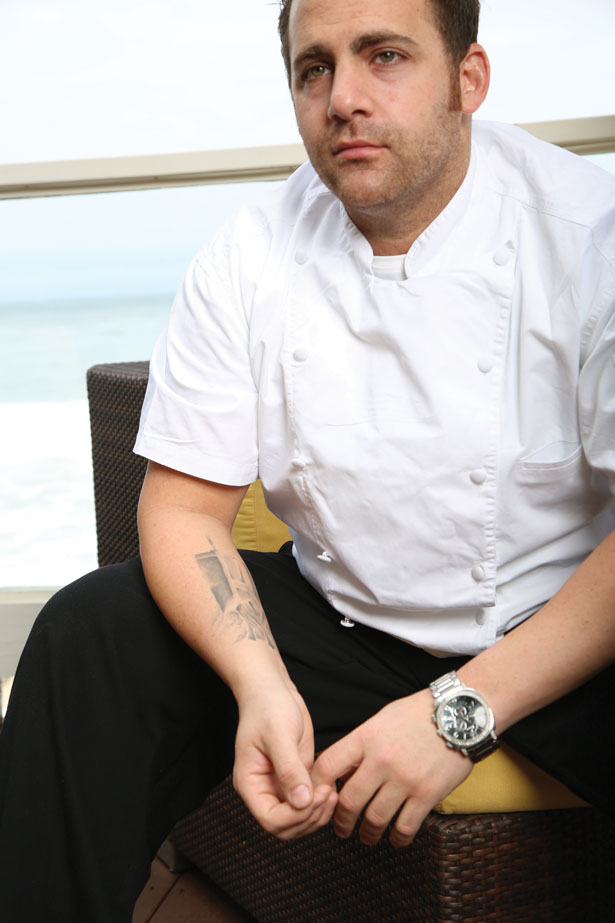 Chef Michael Ingino: The Deck and The Beach House

Born and raised in New York, chef Michael Ingino is a graduate of The New York Restaurant School, now known as The Art Institute of New York City. He wears his heart, and art, on his sleeve with his tattoo of the twin towers and the letters “NY” above the ashes. “I got it two years ago because my roots are in New York, and I lost a very good friend in 9/11,” he says.

Walk in The Deck or The Beach House while he’s working, and you’ll see his art on display. “I don’t cover them up. They’re a good talking piece. People always tend to ask if I’m from New York.”

Michael also has a tattoo of Cantonese letters that say “chef.” “Why do we get tattoos? Because we’re all crazy … kidding,” he jokes of those inked in his business. “Chefs are artists and tattoos are art.” 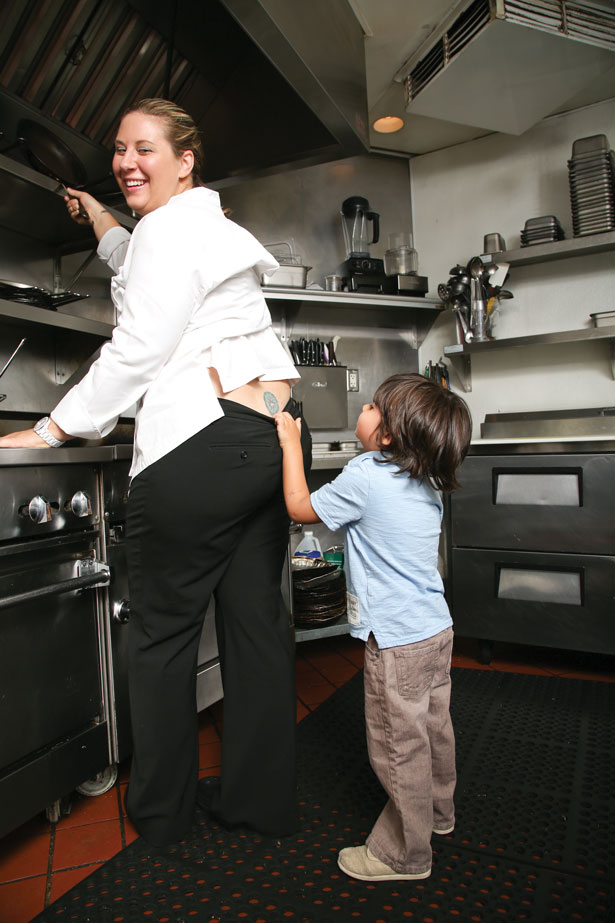 Her food is meant to invoke a feeling of harmony in mind, body and spirit, and chef Lindsay Smith-Rosales’ American Indian sun god tattoo represents the need for rain to water the crops for food. It’s on her lower back, so you may catch a glimpse if she’s reaching down or wearing low-rise jeans. When asked about all the inked chefs, she says, “I think it’s the adrenaline and the speed of the kitchen. The nature of our business leads to a more edgy individual, a risk taker, an adrenaline junky.”

Lindsay got inked at 16. “A tattoo-artist friend had a studio in his garage, and so leaning over a weight bench, I had my tattoo placed on the small of my back,” she says. “My father, an American Indian antiquities dealer in Santa Fe, N.M, had given me a pin as a young girl with the American Indian sun god.” The tattoo was meant to be, she says.
Chef Abel Vargas IV: Katsuya 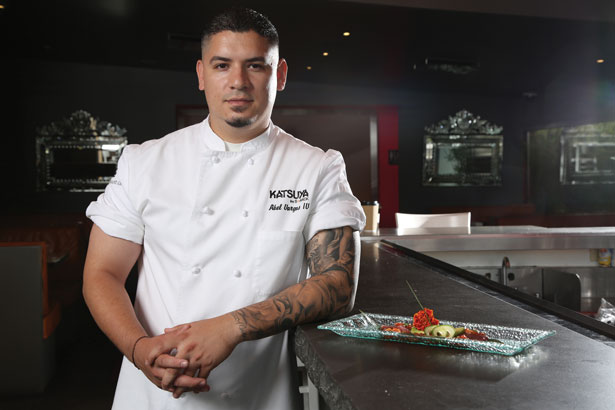 “I started getting tattoos the second I turned 18 and haven’t looked back,” says heavily tatted chef Abel Vargas of Katsuya. “To be a chef is not your average 9-to-5 job, and it’s definitely not for everyone. Tattoos say what we don’t need to say—that our job is rough, stressful, fun, fast, rewarding and painful, just like the ink that we have.” Abel says his ink is art, and it’s all about creativity. He talks about his many da Vinci and Michelangelo works on his left arm, explaining, “When I see religious artwork, I see something that has been well established, beautiful, tasteful and well known.” When asked how guests react, he explains, “It’s funny because they look at me, and then at my tattoos, and just carry on with the conversation as if it is normal. I think nowadays permanent ink on your body is much more accepted than before, when it was taboo. Tattoos are exactly like clothes, hair, makeup, heels, jewelry, cars, et cetera. They do not define you as a person but simply add to your personality.” LBM 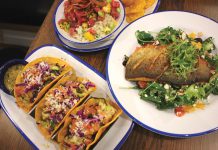