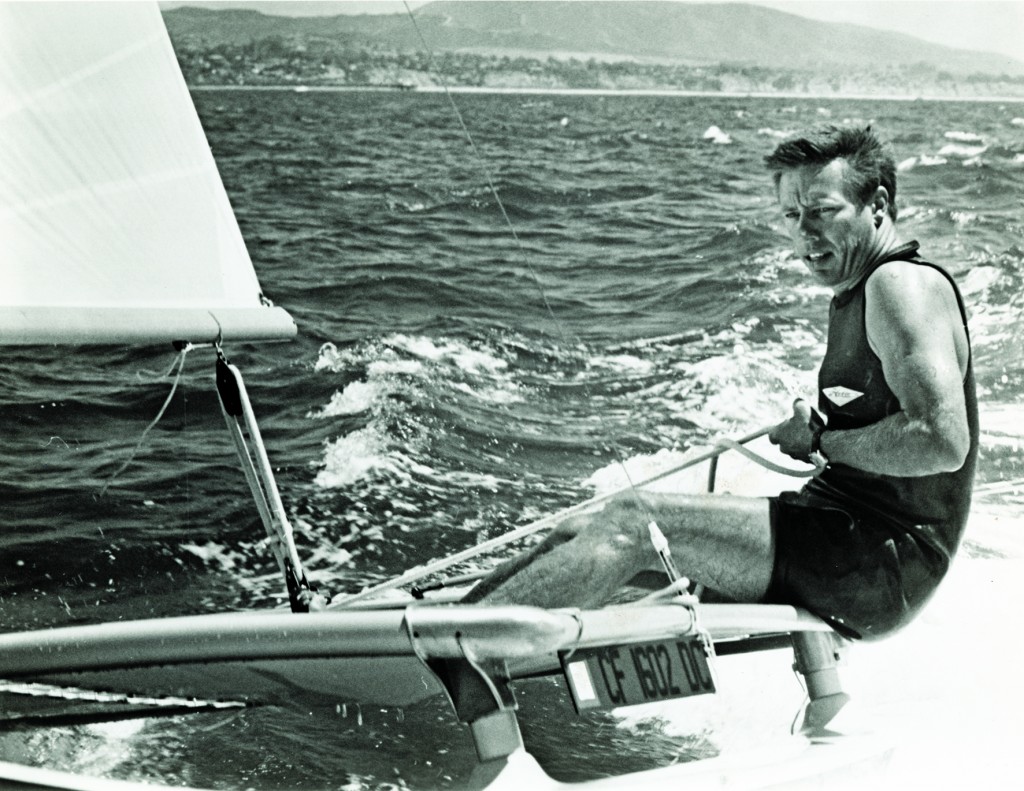 Hobie Alter will forever be celebrated not only as a pioneer in the surfing and sailing industries, but also for his enduring kindness and generosity.

Hobie Alter, pioneer of foam-core surfboard production, began shaping boards as a teenager in the garage of his parents’ Laguna Beach summer home. This local legend would soon transform the surfing world with his fiberglass boards, which became the industry standard, and was among the first inductees into the National Sailing Hall of Fame for developing the Hobie Cat, a popular lightweight catamaran, among other successful vessels.

Hobie, who died in March at 80 years old, was smitten by the ocean and would spend his life in pursuit of ways to enjoy it. Mark Christy, president and owner of Hobie retail stores, says Laguna’s beaches instilled in Hobie a lifetime passion for the sea. “From the Alter family garage on Gaviota [Drive] began a story that would send ripples around the planet,” Mark says. “… His name is known around the world and stands for quality and innovation. It all started right here and he always considered Laguna his home base.”

Refusing to wear a suit and tie, and reluctant to wear anything but flip-flops, Hobie was destined to be successful doing something that probably didn’t feel like work to him. Mark says Hobie once told him, “If it’s fun, it’s never work. If it isn’t fun, it’s never worth it.”

Often called the Henry Ford of the surfboard industry, Hobie cut costs and production time through his manufacturing innovations and by embracing breakthrough synthetic materials—trading expensive balsa wood for durable polyurethane foam. Ever an inventor, he also created the Hobie 33, an ultralight displacement monohull sailboat; the Hobie Hawk, a radio-controlled glider; and the Hobie Super Surfer skateboard.

Hobie’s contributions made an indelible mark that will live on in both the surfing and sailing worlds. He received a Waterman Achievement Award from the Surf Industry Manufacturers Association in 1993 and was added to the Huntington Beach Surfing Walk of Fame in 1997.

Paul Holmes, author of “Hobie: Master of Water, Wind and Waves,” describes Hobie as “a genuine genius.” “[He was] a shaper of surfing, skateboarding and sailing cultures; a great craftsman and innovator,” Paul says. Hobie’s inventions made surfing and sailing accessible to the masses while his numerous accomplishments, creativity, determination and passion for ocean sports continue to inspire many, his adventurous spirit encouraging all to “Have a Hobie Day.”

Hobart Laidlaw Alter was born in 1933 in Ontario, Calif., to Hobart and Kate Alter. His father was a second-generation citrus farmer. Hobie and his two older sisters, Carolyn and Lillian, enjoyed spending time with their parents at their summer home in Laguna Beach where the Alters had been coming since the early 1900s. Their house overlooking Oak Street Beach was built in the 1920s, when the population was less than 2,000 and the roads were all dirt.

At age 16, Hobie was one of the first to surf Laguna’s waves, and he did it on a finless 12-foot Catalina paddleboard, according to Paul. Hobie was hooked, but surfboards were hard to come by since they were not yet being mass-produced. Most of the early wave riders made their own boards or bought balsa boards crafted by artisans at local surf shops.

In 1950, at Brooks Street Beach, Hobie met Walter Hoffman, an experienced surfer with a then-modern surfboard, who encouraged Hobie to make his own board. Hobie’s legacy began that year when he started hand-carving balsa wood surfboards in the family’s garage—the start of his surfboard dynasty. It was 60 years ago that, in 1954, Hobie bought a lot in Dana Point and opened his first surf shop at just 21 years old. Before he knew it, he was having a hard time keeping up with the demand for his boards.

A few years later, Hobie enlisted the help of Gordon “Grubby” Clark, a laminator with a science degree, to create a polyurethane foam that would be used to make surfboard blanks. They set up a workshop in Laguna Canyon, far from the prying eyes of competitors that visited Hobie’s Dana Point shop. After much experimentation, they concocted the right recipe and, from then on, Hobie’s boards were made of foam core and fiberglass, a formula that would change the surfing industry forever. With these new materials, Hobie was able to mass-produce boards that were lighter, more responsive and easier to ride. And, with the release of the surf movie “Gidget” in 1959, demand soared. Hobie quickly became the No. 1 surfboard brand in the world, and the foam-core board remains the industry standard today.

The entrepreneur also helped shape local surf culture. In 1955, he and other industry legends organized and competed in the Brooks Street Surfing Classic. “Consistent with his maxim ‘build them a toy and a game to play with it,’ Hobie lobbied the city for the event permit,” Paul says. That first year, Hobie came in second place. In 1956 and 1957, Hobie placed first, proving his abilities as a competent and competitive surfer.

Jumping from water to land, Hobie began making skateboards in 1962. Riding a wave of ups and downs in the skateboard industry, Hobie would later introduce a line of skateboards with polyurethane wheels that were more user-friendly than previous clay versions. And yet, when the skateboarding business went downhill in 1979, Hobie decided to sign over the licensing and move on.

While developing skateboards, Hobie also was tinkering with sailboats. In the late 1960s, inspired by an outrigger sailing canoe, Hobie started designing and building his now-famous Hobie Cat catamarans, which would skim the water and give surfers another adventure to try when the waves were flat. With his surfboard business booming, Hobie didn’t want to put a lot of time or money into these twin-hulled crafts, but Art Hendrickson was willing to go into business with Hobie to see where they could take it.

There were other small catamarans being tested at the time, but Hobie’s design included a pick-up rudder so that it could be sailed onto or off of the beach, rather than having to be moored offshore. The Hobie Cat revolutionized the sailing industry and soon became one of the world’s top-selling sailboats. Hobie went on to design more than 10 different models of Hobie Cats.

Hobie’s legacy as an inventor and businessman is hard to beat. The Hobie brand has become a household name with water sports enthusiasts worldwide. Today, there are five Hobie Surf Shops—all in Southern California, including one in Laguna—that have sold tens of thousands of Hobie surfboards and Hobie stand-up paddleboards (SUP), which are also sold around the world through a dealer network.

Currently, Hobie’s sons, Hobie Jr. and Jeff, operate Hobie Designs and oversee the company’s licensing operations, surfboard and SUP manufacturing. However, Hobie sold the surf shops in 1996 to local Mark Christy (whose sister is married to Jeff). “Hobie called and said he knew the perfect buyer for the stores,” Mark recalls. “I asked who and he said, ‘It’s you, Mark. You live the lifestyle and love the ocean.’ I told him I didn’t know anything about the retail business and he said, ‘Just do what I did. Hire the best people you can find, and let them do what they do.’

“So I took a chance, hired some amazing people and it has been one heck of a ride since,” Mark continues. “… We’re lucky to carry on the company he started back in 1950 and we are all still having a ‘Hobie Day’ every day we show up at work.”

Continuing to move the iconic brand forward, Hurley collaborated with Hobie to design and sell a complete line of classic surf apparel called Hobie by Hurley in 2011. Hobie also has manufactured high-quality polarized sunglasses since 1982 and continues to be a leader in this category.

Hobie Cat is managed separately in Oceanside, Calif., with a focus on sailboats and kayaks. Internationally, there are approximately 500 dealers that have sold more than 200,000 Hobie Cats plus Hobie’s line of kayaks, including some that replace the paddle with MirageDrive—pedal-powered underwater fins—leaving hands free to fish or take photos. 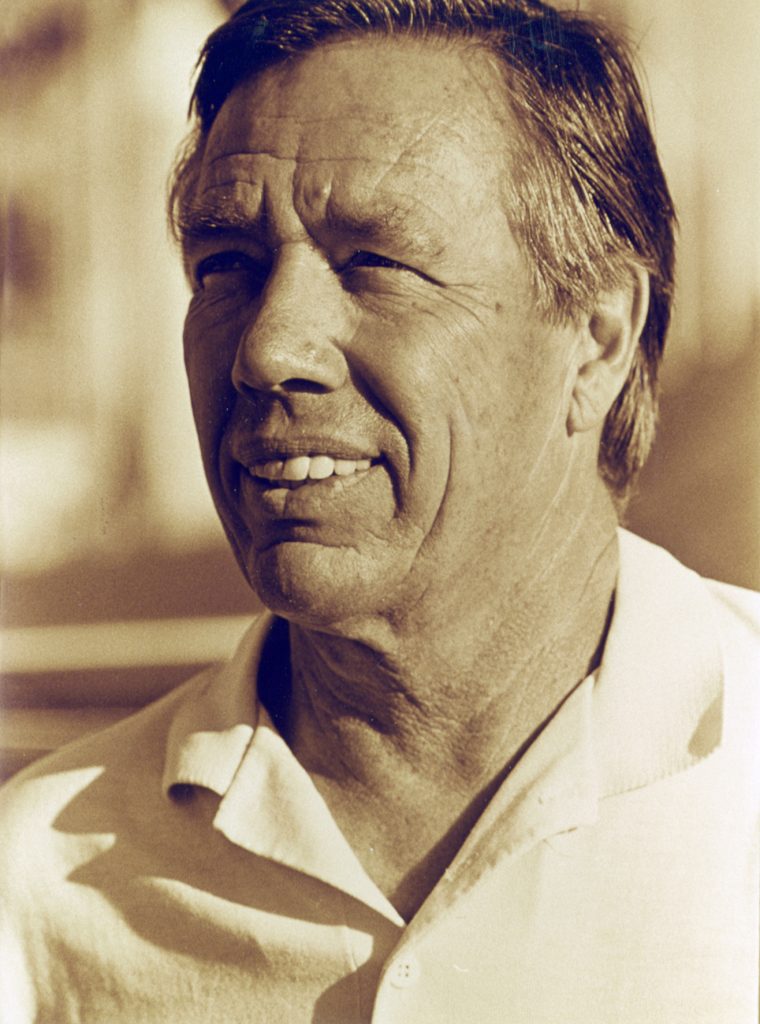 In addition to the company’s worldwide presence, Hobie’s legacy can be seen throughout Laguna Beach. According to Mark, the Hobie retail store opened in 1978 on Forest Avenue and moved up the block to the current location in 1988. Today, the building is home to a surf-themed sculpted metal mural, “The Waterman’s Wall,” created by artist Randy Morgan in 2012. Randy added the Hobie logo on the catamaran and depicted Hobie tandem surfing with his longtime surfing partner Laurie Hoover.

Hobie’s kindness is also remembered around town through stories of those who had the chance to know him. Laguna Beach City Councilman Kelly Boyd, who was a member of the Hobie Surf and Paddle Team as a teenager, recalls borrowing Hobie’s personal surfboard. “He was kind enough to let me use his board and trusted me to bring it back,” Kelly says. “He would let me go into his house and take his board off the wall and surf it. He told me, ‘Just don’t ding it.’ ”

Stories like these help to keep Hobie’s memory alive. After battling cancer, Hobie died March 29 at his home in Palm Desert, Calif., leaving behind his wife Susan, ex-wife Sharon and their children Jeff, Hobie Jr. and Paula, as well as numerous grandchildren. On April 18, off the coast of Dana Point, hundreds of friends, family and admirers honored Hobie’s wish to have a traditional Hawaiian paddle-out ceremony after he passed away.

Above all, Jeff says he would like people to remember his father for his ethics. “I think what struck me the most after the memorial was that the common theme from friends, employees, strangers—just about everybody my father came in contact with—seemed to have such great things to say about him and his ethics,” Jeff shares. “I truly believe he went through his life never making an enemy and always lending a hand where needed.”