The residents on El Camino del Mar not only have built families, but also a sense of community over the generations they’ve lived on the street.

Living on El Camino del Mar means that all the city of Laguna Beach has to offer is a mere footsteps away—Main Beach, Sleepy Hollow, art galleries, the farmers market, local shops, restaurants and the high school track—but that’s not the only reason why folks choose to raise their families and stay on this street for generations. While some would think that walking distance to all these attractions is one of the most desirable traits for this neighborhood, it’s more so the sidewalk-lined streets, white picket fences, homes built with traditional character and charm, and overall sense of community that make it the quintessential street to call home.

“Driving around the village in Laguna, this street is very different,” El Camino del Mar resident John Hovanesian says. “Someone once described this as the street where the Cleavers live. It’s a neighborhood where most people who live here have been here for 20-plus years. It’s the exception. People just don’t seem to leave the street.” 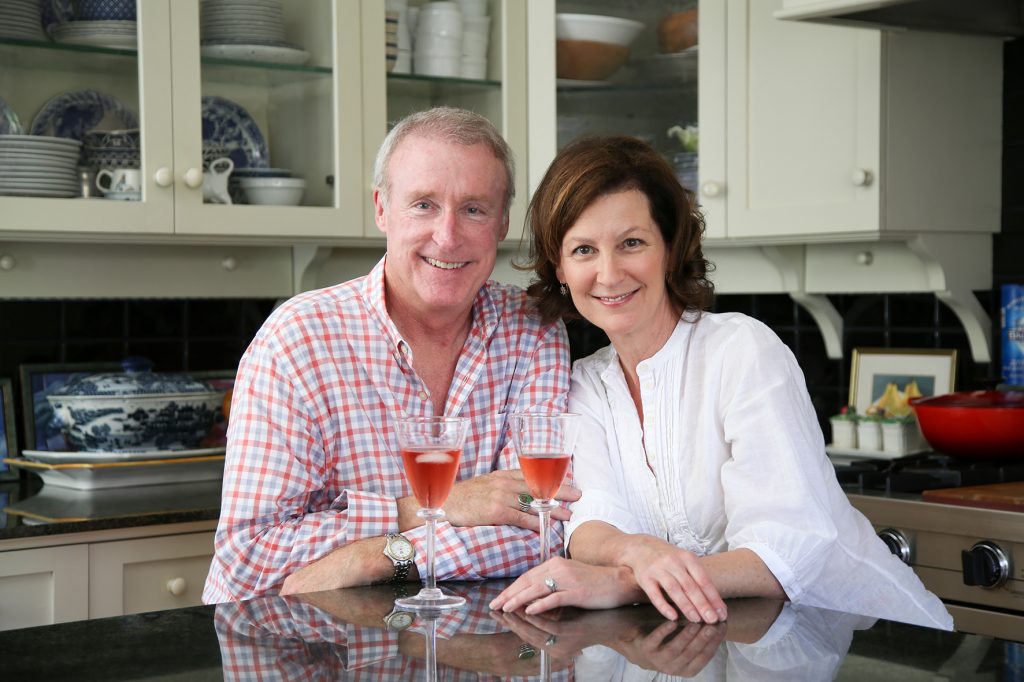 DAY JOB: Kevin is a partner in Laguna-based GlenOaks Yogurt; Stephanie is co-founder of a women’s fundraising group, Womenade, and a former volunteer reading tutor at Top of the World Elementary School.

FABULOUS FEATURE: An antique chest repurposed as a sink vanity with granite countertop in a downstairs bathroom

There’s something nice about the continuity of knowing people for almost 30 years, that if you ever needed something, you could count on [them],” says Stephanie Donavan, who’s lived on El Camino del Mar since 1987 with her husband, Kevin, and their two children, who are now on their own. Back during the 1993 Laguna Beach fire, Stephanie recalls neighbors hosing down roofs to save the other homes on the street—a memory that has showed her how special this place really is. New families have moved in since then, but the neighborhood “still has that feeling of a little community within itself that’s really special.” 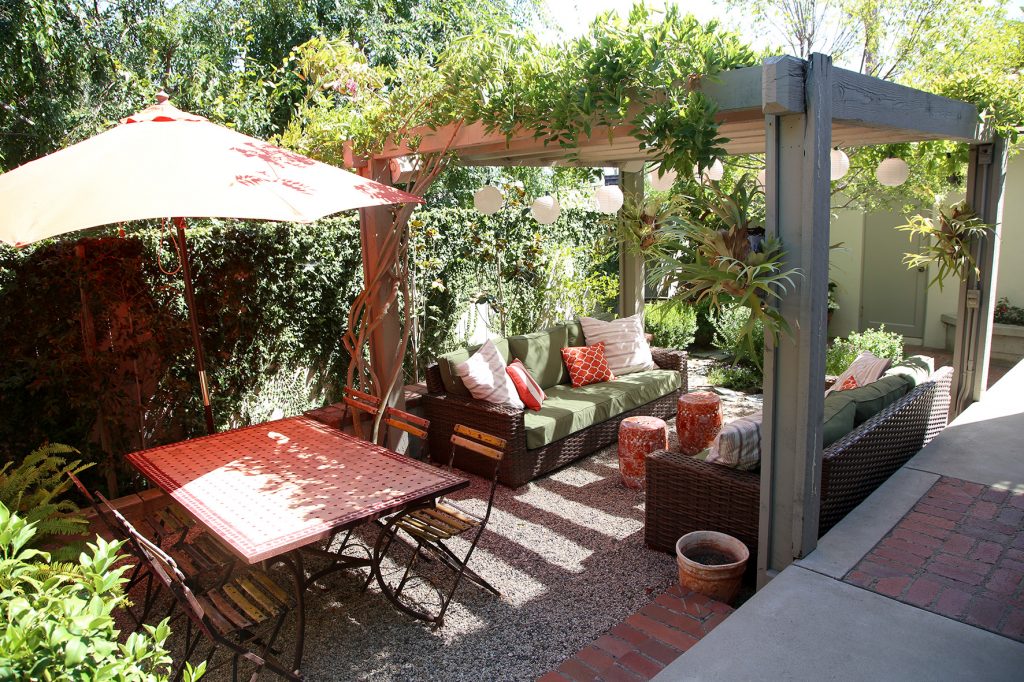 Built in 1945, the Donavan home was designed in a subtle Monterey colonial style with a covered balcony stretching across the front of the house on the second story. Inside, a wood open-beam ceiling and hardwood floors create warmth and make the space inviting. “It has a homey, cozy feel,” Stephanie says. “It’s the one comment we get when people walk in the house. I think that has a lot do with having an older home that has a little more character and details.”

With an eye for bright colors, the Donavans fill their home with many unique collections, which include everything from old Laguna landscape paintings and still life paintings of fruit (one of Stephanie’s obsessions) to turn-of-the-century seltzer bottles, blue-and-white dishes and pottery. “We’ve been married almost 39 years,” Stephanie says. “So, we have a lot of pieces that we’ve picked up over time, either at the antique store or collections of things, that mean something to us [and] are pieces we like and figure we’ll make it work somewhere.”

French doors in the family room open up to the lush garden outside, where Kevin and Stephanie grow their own fruits, vegetables, perennial plants, flowers and bulbs. Garden views from the living room, family room and kitchen connect the interior to the outdoor landscape. “Most days, we leave our doors open so our dogs can wander in and out,” Stephanie says. 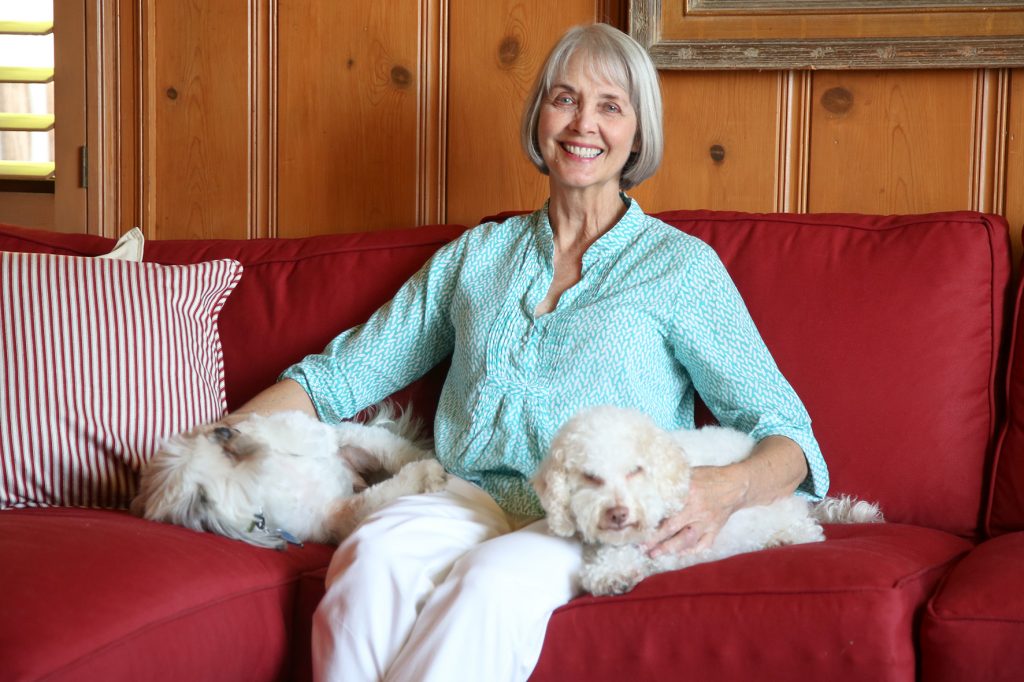 DAY JOB: Christopher is a pathologist for Mission Hospital; Deborah is a retired pharmacist.

When the Vanleys moved into their 1935 home on El Camino del Mar, “it just looked like a boring stucco house on the outside,” admits homeowner Deborah Vanley. On the inside, however, there were arts and crafts elements just waiting to be revealed. The Vanleys then hired Laguna designer Gregg Abel to bring out the home’s true potential and streamline the overall look. 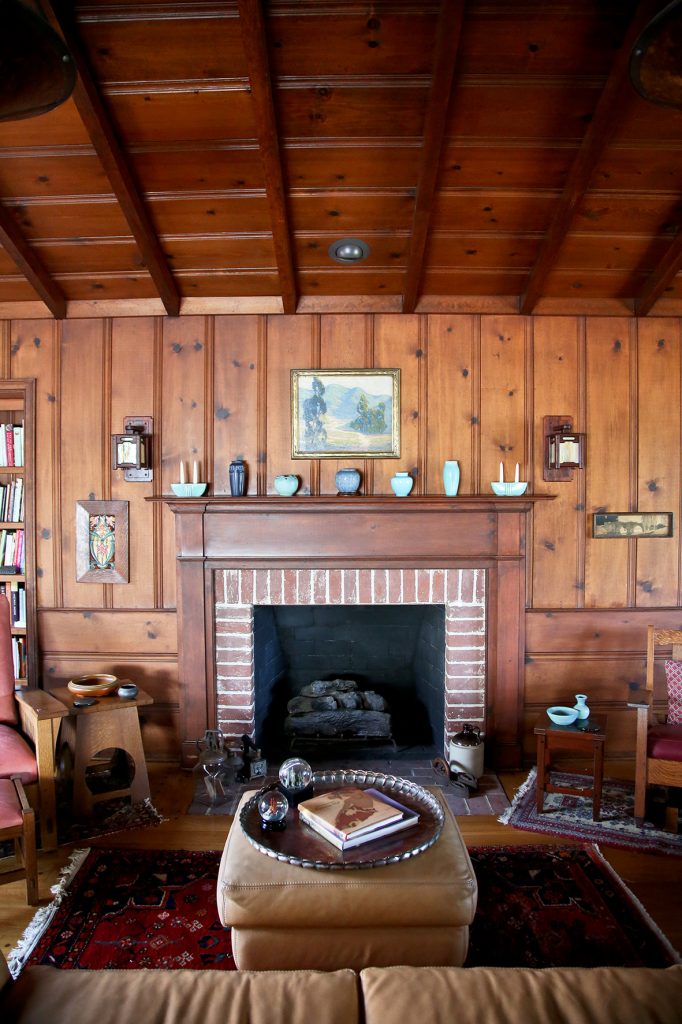 Making over the home’s exterior gave it a more authentic arts and crafts flavor, which features a stone facade with brick accents, a wood-shingle roof, leaded wood-framed windows, outdoor arts-and-crafts-style lanterns and lighting fixtures, and a mahogany front door with an iridescent art glass window by Laguna designer Craig Herbert. An eyebrow window, a detail that was popularized in the late 19th century, peeks out over a front bay window.

One of the home’s original features, the interior wood paneling, is locally referred to as “Laguna paneling” because of its presence in many historic Laguna homes. “Most of the inside is all wood; it doesn’t show fingerprints, so it was a great place to raise kids,” says Deborah, whose children have since grown up and moved out. “To this day, you can still get this wood from the lumberyard in the canyon. It’s kind of indestructible. If something happens to one panel, you can just go buy a new one and replace it.”

In the living room, mission-style lanterns hang from a dark open-beam ceiling, while several period arts and crafts pieces are sprinkled throughout the home, from a Stickley chair to pottery and lamps, which blend in with the warm background.
Bringing the outside in and the inside out enhances the home’s welcoming vibe. “All major rooms open out to the courtyard with French doors,” Deborah says. The kitchen’s sliding window opens up to the outside, “so people could be out on the courtyard enjoying a cocktail, and I could still converse with them while I finish making dinner,” she adds.

“Where we live, we could eat outside almost half the year, so we have most of our evening meals out there in the nice weather.” 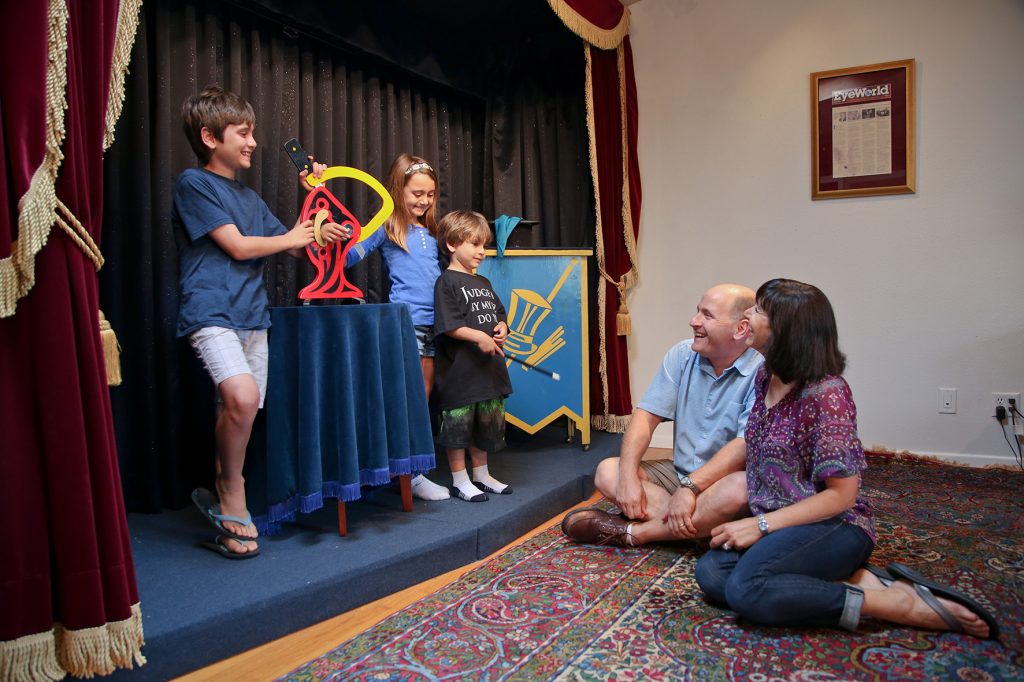 FAMILY FACTS: John and Tanya Hovanesian and their three children (ages 4, 8 and 11)

DAY JOB: John is an eye surgeon for Harvard Eye Associates in Laguna Hills and the commissioner for the Orange County Council of Boy Scouts of America; Tanya is a full-time mom, Sunday School teacher and Scouts volunteer.

For the Hovanesians, who keep busy with volunteer work and their three children, virtually everything inside their home is comfortable, casual and centered around the family. “It’s the kind of house you raise kids in,” John Hovanesian says of his California Cape Cod-style home with layered yellow siding and a white picket fence, where the family has lived since 2006.

At the heart of it all is the family’s kitchen. “That makes it very livable because it’s not only physically in the center of the house, but it’s also where we live,” wife Tanya Hovanesian says. One rounded end of the granite-topped kitchen island with barstools provides a spot for food prep, homework, sitting with laptops when the kids are in bed and, of course, dining together. “Everything empties out into that one section of the house where the kitchen island is,” she adds. “When people come over, that’s where everybody congregates. We always try to have as many family sit-down meals there as possible.” 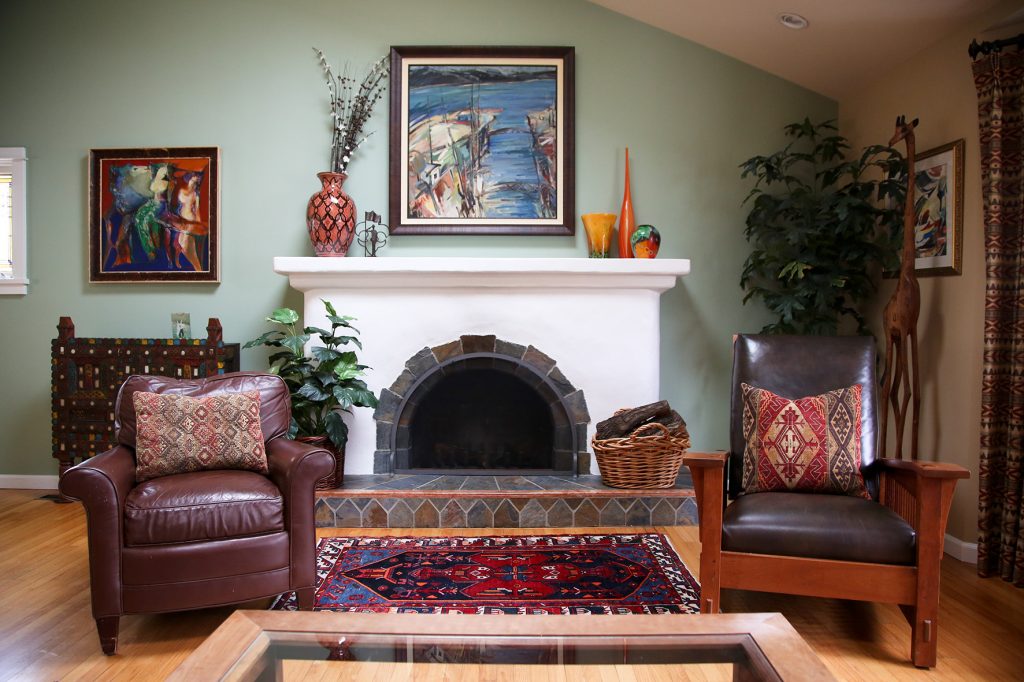 While most of the home takes on a more traditional aesthetic, the family’s living room is decorated in a style Tanya refers to as “tribal.” An eclectic mix of ethnic furnishings and accessories inject personality into the space: Navajo-patterned draperies, Kazakh area rugs, a multicolored Moroccan table and an antique Indian-painted clothing chest.

Paintings by artists in Armenia add color to the walls and help tie the look together. John does a lot of volunteer work there, and often brings back new pieces to display that remind him of his travels and give a nod to the family’s Armenian ancestry.

Other fun details give the home a kid-friendly twist. Outside in a small yard, for example, a playhouse for the Hovanesian kids is designed as a mini replica of the family’s home, complete with yellow siding.

In John’s office, a magic theater and stage with red velvet draperies and gold tassels allows the children to carry on the family tradition (John used to be a magician and, now, the Hovanesians’ children have taken on the hobby as well). “It’s a fun place to entertain and be entertained,” John says. 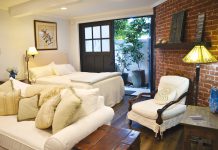