They may not wear capes, but these individuals demonstrate superhuman bravery and selflessness.

By Bria Balliet and Matt Valdez | Photos by Jody Tiongco

When the Patriots Day Parade returned last month after a rain hiatus in 2014, it was cause for celebration—the hundreds of locals who lined Park Avenue to cheer on participants are evidence of Laguna’s boundless civic pride. Since its humble beginnings in 1967, the once-small gathering has evolved into something much bigger, with a sea of people dressed in red, white and blue honoring citizens who have served their country and the community.

“I think it’s a representation of the city and how it wants to pull everybody together,” says Robert Mosier, a World War II Army pilot who served as this year’s honored patriot in the parade. “The whole city is involved.”

Emily Ross, the parade’s founder, proved that patriotism could be celebrated year-round.  So, on the heels of our Patriots Day Parade, we offer our own tribute to people in town who are changing lives. Whether they’re serving the country on the front lines of war or fighting to keep families safe from disease, these four extraordinary individuals—just a few of many in Laguna who are making a difference—demonstrate a superhuman level of dedication and courage.

Going above and beyond isn’t a foreign concept for David, a recent Firefighter of the Year—his dedication to the department and the local community earned him recognition at the 2014 South Orange County First Responders Appreciation Awards Dinner. 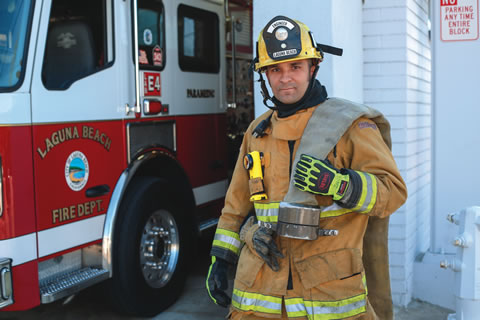 His journey to the Laguna Beach Fire Department began more than a decade ago when he landed a job as a dispatcher. As he received calls and sent out responders, he realized that his passion was on other side of the radio. Though he had one of the most challenging civilian positions in the department, he yearned to be in the field saving lives. In 2010, after rigorous EMT and fire training, David’s hard work and perseverance finally paid off.

David took his new position seriously from day one; he explains that he and his fellow firefighters have a responsibility to not only provide aid in emergencies, but to contribute to the community. In addition to their public service duties, the city’s firefighters participate in a number of programs ranging from station tours for children to charitable fundraising.

The 33-year-old is also a member of the Orange County Fire Authority Pipes and Drums, a 24-member bagpipe and percussion band that performs at memorials and funeral services for fallen firefighters and police officers. The bagpipes have a long-standing association with firefighting, stemming from the early 1800s when they were played at the funerals of many Irish immigrants who filled the dangerous positions. “It’s important that we honor these people in a way that is worthy of their contributions,” David says of the tradition.

With all of his endeavors and accomplishments, it’s easy to understand how you might see David as a hero. But in his eyes, he’s no different from anyone else in his department. “I feel that what I do isn’t really a big deal,” David says. “We all put in effort and care into our job. We all work together to serve the community and make a difference.” —M.V.

While many may recognize members of our homeless population, it’s not often that we take the time to chat with them, get to know their stories and offer help. But for Jason, a member of the Laguna Beach Police Department, that’s part of his daily routine. Serving as the community outreach officer since the position was created in 2008, he spends many mornings connecting with homeless individuals and offering available resources. Sometimes it’s as simple as finding them shelter for the night or as personal as reuniting them with family members. 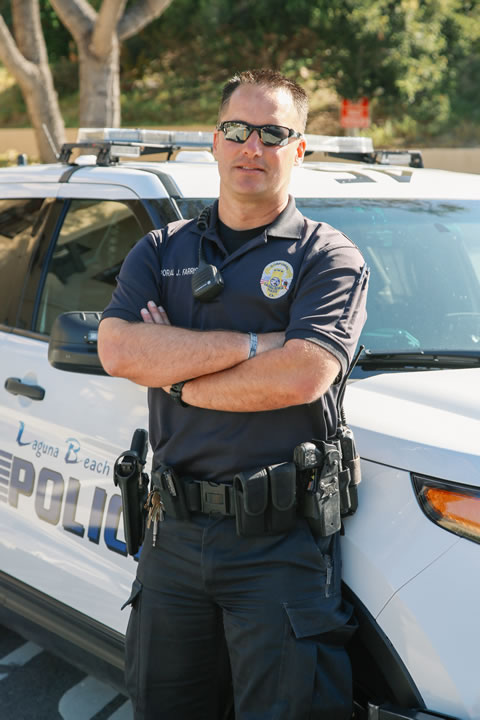 “I want the public to know … that we do everything we can to protect businesses, the residents and tourists, and homeless people equally,” Jason explains. “The law isn’t written for only certain people.”

Since taking on this position, Jason has helped countless people get off the street, get into rehab and make it home to their families. His successes have earned him a number of honors, including a “top cop” recognition on Law Enforcement Night at Angel Stadium during the pre-game ceremony last year, an officer of the year award from the local American Legion post in 2010, and a medal of merit at the 2011 annual police banquet.

But even with the numerous commendations he’s received during his career, one of Jason’s most prized possessions is a bit more modest than a plaque or certificate. Some time ago, he gave a former homeless man a map and a bus pass, along with a suggestion to check out a nearby rehab facility. After one year of sobriety, the man found Jason and gave him an Alcohol Anonymous chip, which the officer now keeps with his badge.

“I didn’t even drive him—and I’ve driven people to rehabs,” Jason says. “… [But] he went, and he got clean and sober. … And I carry that coin with me because it reminds me that no matter how small of a thing I do, you never know what it’s going to turn into.” —B.B.

Korey’s 40-year career in Laguna Beach is nothing short of significant. The recently retired family physician and HIV specialist has treated thousands of underprivileged patients at the Laguna Beach Community Clinic (LBCC). “I decided at around the age of 14 or 15 that I wanted to become a doctor,” says the now 70-year-old. “I liked the aspect of helping people for a living.” 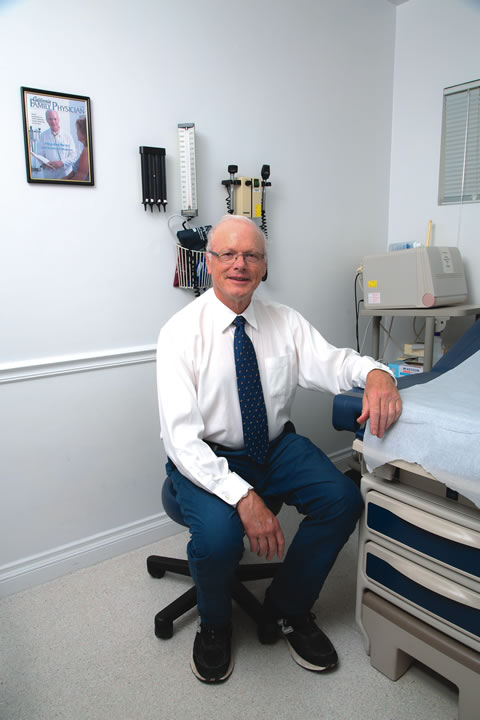 Decades ago, Korey served as a Navy physician at the old El Toro Marine Corps Air Station near Irvine, where he got to know other local doctors. “I was encouraged by [Laguna’s] Dr. Bill Anderson of Sleepy Hollow Medical Group to look into the community clinic here to do some volunteering,” Korey explains. “I started in 1972 and have been there ever since.”

In the 1980s, a mysterious illness— which we now know as human immunodeficiency virus—began afflicting members of the gay community. It wasn’t long before some of Korey’s own patients began developing symptoms, prompting him to leave his private practice in 1993 to join the HIV treatment program at the LBCC. “It’s hard for me to talk about those days without weeping,” he says, filled with emotion. “It was just so bloody awful. Back then, a young person might come in with HIV or AIDS and, before medication, there was precious little we could do for him.”

Though Korey retired last December to focus on his own health, he remains very much involved with the LBCC. He continues to offer financial support, meets with its medical director weekly as an adviser and represents the clinic on the city’s HIV Advisory Committee.

Despite his huge contributions to Laguna over the years, he maintains that it wasn’t a solo effort. “I loved my work at the clinic, but it would not have been possible without support from the community,” Korey admits. “It’s a good cause and I’m grateful that people agree it’s worth funding to take care of those who can’t get help anywhere else.” —M.V.

Cody, the son of Laguna Beach Fire Department Chief Jeff LaTendresse, is part of a new generation of heroes. Last September, the 19-year-old enlisted in the Army as an emergency medical technician (EMT) and graduated from basic training in November. 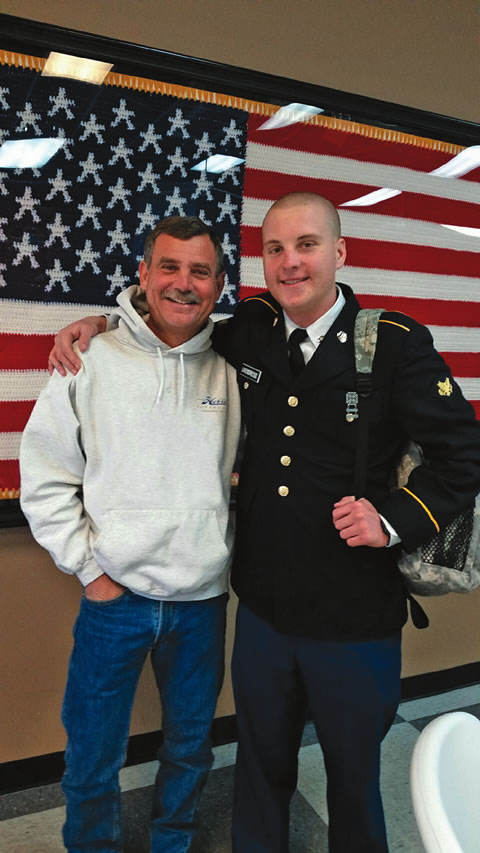 “My dad served in the military and went on to become a firefighter after,” he explains. “I also knew that I would gain a lot of experience there that would help me reach what I am trying to do.”

Since childhood, Cody knew that he wanted to follow in his father’s footsteps—seeing Jeff help people in the community inspired him to take action. At the age of 14, Cody joined the local Fire Explorers program, which offers teenagers hands-on training and exposure to different careers within the fire service. “I was always trying to go to the fire station with my dad,” he says. “I wanted to do anything I could to become a firefighter.”

As Cody got older, he sought out more opportunities to get his foot in the door. While attending Laguna Beach High School, he enrolled in EMT classes, took a number of medical and fire-related Regional Occupational Program (ROP) courses, and eventually decided to enlist in the military.

While he admits there was certainly a culture shock going from Laguna Beach to life on base, it was worth it once he began his medical training. “Once I got to AIT (Advanced Individual Training), I finally got to start my medi-training, which has been amazing,” Cody says. “As we get more in-depth, things have been getting pretty intense, but I love it.”

Cody will remain on active duty for the next four years and on inactive reserve for another two. He shares that, although he looks forward to coming home, he has no regrets about enlisting. “The ultimate goal is to become a firefighter,” he says. “And I know that I am working towards that by being here.” —M.V.

Definition of a Hero

A few 2015 Laguna Beach Patriots Day Parade honorees share what the word means to them.

“A hero is one who jeopardizes her [or] his well-being to assist one or more living beings who are threatened by a catastrophic event, without the intent of any personal gain.” —Wayne Baglin, Citizen of the Year

“To me, a hero is someone who puts others ahead of themselves. … If in a situation where it’s needed, they are ready to jump in with no regard for themselves or thoughts of reward. A hero, pure and simple, does something because it is the right thing to do and I admire them for that.” —Alisa Schwarzstein Cairns, Athlete of the Year

“A hero stands up for his family and his friends against all odds. He is truthful and honest and is not swayed by any argument other than his determination to be true. He can be relied on to be there through thick and thin, and seeks no reward other than being consistent with his code of ethics.” —Ian Cairns, Athlete of the Year

“[Heroes are] people who support the country and work in civic activities [and] do their part. I think every youngster coming out of high school should be involved in something to support the country.” —Robert Mosier, World War II Army veteran, Honored Patriot 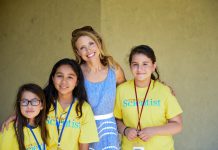