Innovative artist Fatemeh Burnes works locally and dreams globally, thanks to her storied past.- By Daniella Walsh | Photos by Jody Tiongco 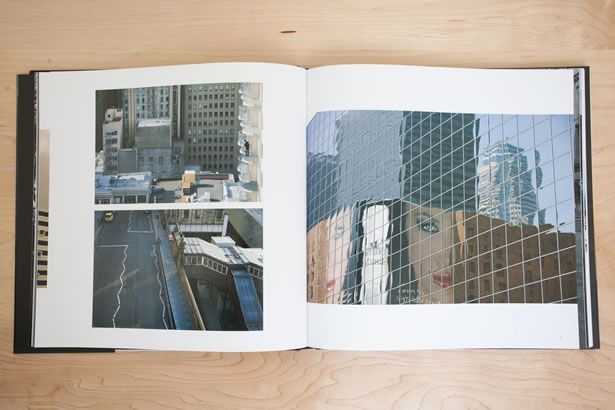 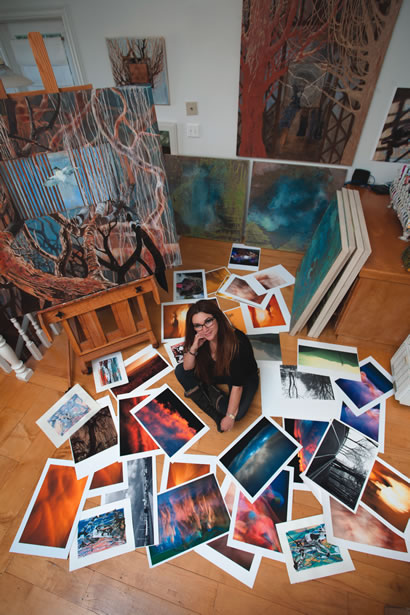 A winding road appears to recede into a void, topped by a dark, ominous looking sky. Yet there are patches of light, giving the scenario a touch of mystery but also, as light often will, an aura of spirituality and hope. This is one of Fatemeh Burnes’ latest photographs to be included in her first book of photos titled “Drift: Imprints of Nature and Human Nature.” It might very well be seen as a capsule view of her life—then again, she has photographed a mountain road leading into a foggy void and another, covered by a thin layer of snow, that bears the imprint of cars skidded astray and footprints leading to who knows where. Fatemeh, as her story of a migratory earlier life evidences, knows roads—lots of them.

One of her abstract paintings on metal alludes to a map of Tehran superimposed onto what looks like a map of wider territory. Embedded in the pattern is a Star of David, a hint that Fatemeh, while born a Muslim, is an agnostic who has studied religions including Judaism and the Kabbalah, and who has retained a deep spirituality which she declines to classify. “For me, faith is grounded in giving. I was taught early on that giving to others is really a gift for yourself, a privilege,” Fatemeh says.

Motivated by spirituality and empathy with victimized humanity, Fatemeh visited Dachau, a Nazi-era concentration camp. A series of photographs taken during the trip comprises a dramatic portion of “Drift.” Fatemeh is also working on a series of paintings, diptychs for the most part, based on impressions from the journey. “It will take me years to process the experience fully—if I ever will,” she says.

Tyler Stallings, director of the Sweeney Art Gallery and the Culver Center of the Arts at UC Riverside, describes the book as an artist’s book. “There are essays but there is not much information. The viewer has to make all the connections. The Dachau series is particularly powerful because on the surface, with all the trees grown up, the place looks deceptively beautiful, hiding its heinous mission,” he says. “It’s in keeping with Fatemeh’s exploration of deeper human, spiritual and moral issues—the photographs are her most direct statement so far.”

On a lighter note, her studio contains several large paintings in progress, distinguished by heavy layers of paint on board that are carved and textured to represent trees and birds. “The paintings are a bit of a contradiction: The trees represent earth and a desire for roots, and the birds represent physical and intellectual freedom and my—unfortunately unfulfilled—wish to fly,” she explains.

She insists that she will not tie herself down to a method or style.

Fatemeh Burnes, né Anvar, was born in Tehran in 1957 when Persia was still ruled by Shah Reza Pahlavi. “The country was quite modern and sophisticated, but then we had little to compare it to then,” Fatemeh recalls about the time when she looked upon the world from her crib.

Little did this baby, whose family tree includes German, Egyptian and Mongolian roots, know then that she would grow into a child prodigy who learned to draw at age 3, to paint at 13 and in the middle of those years receive acclaim for her poetry (written in Farsi) and get a letter of commendation from the imperial household. (“I still have that gold-embossed letter,” she says today.)

She also had no way of foreseeing that she would grow up speaking Farsi, Arabic, French and later learn English and even Spanish, while becoming the mother of three daughters and a son. Fatemeh has left her intellectual imprint on scores of American students who taken art classes from her at Cal State Fullerton, Cal State Long Beach, Saddleback, Fullerton College, Laguna College of Art & Design and currently at Mount SAC, where she directs the school’s art gallery and teaches exhibition design, while dividing her artistic talent between painting and photography.

“I have appreciated a lot of the shows she has done. They are globally-oriented, adventurous exhibitions,” says Mike McGee, gallery director and professor of exhibition design at Cal State Fullerton. “I showed her work in 1982 when I owned the Edge Gallery in Fullerton. She is a remarkably gifted painter who has the creative energy to be an inspiring teacher and first-rate studio artist,” he adds.

Today, she says that teaching courses like “Art, Artists and Society” fulfill her need to give back. “I try to give my students a sense of self-awareness and confidence about their place in art and life. I give them academia so they can be free of academia later.”

“My parents moved around between Iran and Iraq quite a bit, and during first grade I went to five different schools,” Fatemeh explains. She was largely raised by her grandmother, a practitioner of the mystical and ascetic Sufi religion, who insisted that she be schooled in an orphanage to instill a sense of empathy for others. Together they visited homes for the mentally ill to give her a sense of philanthropy before she could transfer into an elite private school. “We brought chocolates and cigarettes. I was dying to try the cigarettes,” she recalls.

Fatemeh’s formal education, in Iran at least, was unorthodox: Her ninth, 10th and 11th grades were compressed into one year—and 12th was interrupted when she, not even yet 16, married Arakel Khajetoorian, a mentor and art aficionado 27 years her senior, who commissioned her to paint his portrait.

Fatemeh also wanted to go to medical school to study genetics and had already passed the entrance exams. However, since her husband, an engineer, traveled extensively and took his young wife along, that plan was shelved. In transit, he taught her the rudiments of his profession. “I did a lot of drawing for him and still know my way around blueprints,” Fatemeh explains.

Meanwhile, she took art classes during their travels that included art history in Florence and, back in Tehran, painting miniatures. “I really painted with brushes that had just one hair,” she quips.

The couple moved to the U.S. in 1973 and became citizens in 1979 after having also lived in Germany, Switzerland, Austria and England. Their two children, Lara and Alexander, were both born in Los Angeles.

Due to her family’s involvement with the Shah regime, Fatemeh was not allowed to return to Iran except for two brief trips facilitated by hardship visas, granted so she could see her father, a post-revolution political prisoner, and later her mother as well.

Stormy from the onset, the marriage dissolved in 1982. A brief second marriage to Orange County-based artist Tom Holste also ended eventually in divorce.

After completing her Master of Fine Arts degree at Cal State Fullerton, she began teaching in 1986, including drawing classes at what is now the Laguna College of Art & Design. In 1994, she moved permanently to Laguna Beach from her studio in Modjeska Canyon, which she now rents out but hopes to reclaim some day.

In 1995, Fatemeh married Jim Burnes, an attorney, and they now have two daughters, Ava and Brighid. Recently, she also became grandmother for the first time to a baby boy.

Fatemeh first began to exhibit her paintings in Teheran in 1975, and during the ’80s and ’90s exhibited in Orange County and Los Angeles as Fatemeh Holste. Sidestepping the commercial gallery humdrum then, she chose to show mostly in college and university galleries, along with a few churches and semi-public venues, preferring teaching and sharing her talents with her students and colleagues for the most part.

After a 10-year art-making hiatus, she again devoted herself to active art making. Currently Fatemeh is the gallery director at Mount San Antonio College (Mount SAC) in Walnut, Calif., where she has co-mingled her work with that of guest artists and students. Now, with a recent successful show at the Fresh Paint Gallery in Culver City behind her and a Laguna Beach solo exhibition of her photographs coming up, Fatemeh is looking forward to expanding her audience further.

It was around 2005, when Fatemeh also emerged as a photographer, devoting herself to this medium with an emphasis equal to that she has always brought to her painting. “My camera is never far from my reach, an extension of me wherever I go, walking or driving,” she says.

Fatemeh says that her love for everything scientific imbues her art-making today. “Now, when I make art, I make my own paints and experiment with the interaction of mediums. I don’t know if I am a scientist making art or an artist delving into science,” she says. In this, genetics may play a role: Her paternal grandfather was an engineer whose avocation was art, which he exhibited at science expositions, Fatemeh explains.

Sitting in her comfortable studio, situated in an out-of-the-way area of her spacious oceanfront Laguna home, she concludes: “The science of art-making fascinates me. I make art not only to produce objects but also to explore phenomena that occur either in the world or in my dreams, as thoughts or as rocks on the ground. I live through my brush and breathe through my lens.”