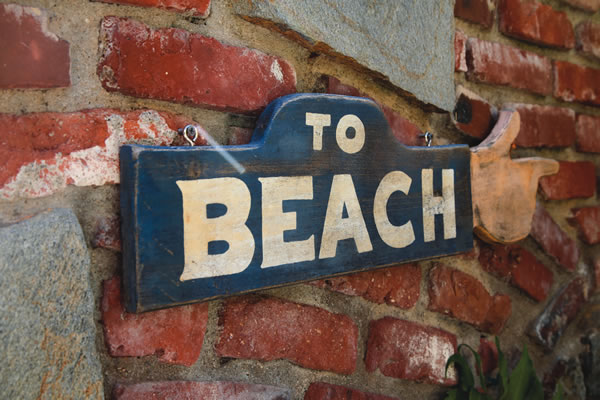 Nestled on a private parcel of land, bisected by Pacific Coast Highway, the 507-lot Three Arch Bay is part of Laguna Beach; however, driving through the gates, you enter a different world. This is a close-knit community, centered around the beach; one where properties often pass from generation to generation, where famous movie stars of yesteryear made their homes, and where, once you have a foothold, moving house is likely to entail relocating a few yards, rather than miles. “We lived a stone’s throw from here for 13 years in a great house,” resident Michele Reynolds explains. Fifteen years later, she’s a little closer to the beach and even happier in her current, one-of-a-kind home.

From 1930s cottages to contemporary structures, many of the homes feature beautifully landscaped gardens and sparkling views of the ocean below. “The neighborhood has a great history; it’s safe and it’s completely peaceful,” resident Michael Kinsman says. Here, three homeowners share why their Three Arch Bay homes are their havens. 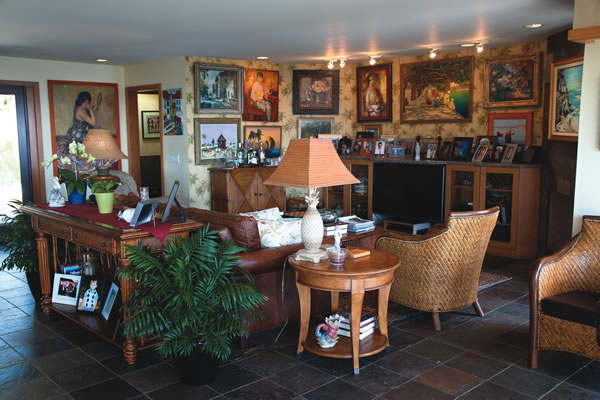 A River Runs Through It

Michele and Tom Reynolds live in a home they purchased from the original owners who built it in the 1960s. “As soon as the house came on the market we knew we wanted it because of the house itself and because we wanted to help protect the views,” Michele says. “When we arrived, the lot was completely covered in giant fir trees. Every neighbor’s view was obstructed. We cleared about 5 feet of pine needles before we could do anything.” Once they’d removed the pines and the debris, the yard revealed its secrets: stands of bamboo, Hawaiian ginger and the original flagstones.

The most amazing feature of the lot is the creek that literally runs through it. “The home is known locally as the ‘Bridge House,’ ” Michele explains. It straddles the creek, which carries water down to the beach below. “When it rains, the water flows like a torrent. It sounds like a train.”

Landscaping consists of rare Japanese cedars, bamboo, palms and other tropical plants, giving the home a Bali Hai feel. A set of immense wooden doors leads to the enclosed front patio. The doors were formed from a 2,000-year-old redwood tree that fell 75 years before a craftsman from Washington state found it. The iconic arches of Three Arch Bay are carved into the base of one door.

The patio features a mosaic-tiled wet bar and TV, a fireplace and a water wall. The outdoor space leads to the open plan living area. “When we moved in, there were walls everywhere. The house was designed for Minneapolis in winter, not California beach life,” Michele says. The walls came down, sliding windows and a deck went in, and Polynesian-style furniture completed the theme.

The beach, of course, is what living here is all about. “I go down to the beach every day in the summer, and there are always sandy little feet everywhere because of the grandkids,” Michele says. As impressive as the Bridge House is, it’s also a welcoming family home. “There are always a lot of people in this house and everyone feels comfortable.” 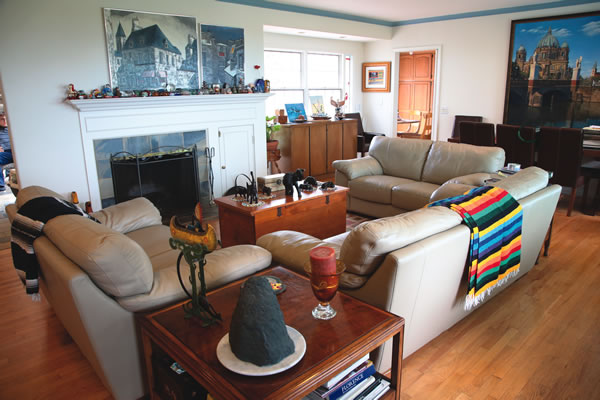 Michael and Cheryl Kinsman have been fixtures in the Laguna Beach community for more than a decade. Cheryl is a former mayor and still active in local government. Michael is president of the Laguna Beach Chamber of Commerce. They moved into their Three Arch Bay home in 1984 from Arch Beach Heights.

“The brakes were starting to go on our car: It was time for us to come down the hill,” Michael says. With a family of four, the original two-bedroom, two-bathroom house needed to be bigger, but the Kinsmans wanted to retain the look of the original cottage. “We extended the home to the rear and up, while keeping the facade the same. In fact, people came up to me after we finished the renovation asking when we were going to start.”

They endeavored to keep the period features from 1951 intact on the inside as well. In a stroke of luck, while looking to replicate the crown molding in the living room, Michael found the actual craftsman who was responsible for the original. “He said he may have some of it still around and, well, he did, so we got another 150 feet of it,” Michael says.

With both a living room and a TV room, there are plenty of comfortable sofas and chairs to curl up and relax, and a plethora of art adorns the walls and the furniture. “We have … a lot of eclectic artifacts,” Cheryl admits. This includes an old turntable, where son Nick enjoys spinning vintage vinyl records.

At the rear of the house is a private patio with a table and chairs and a large flowerbed, containing spring flowers and herbs, cordoned off by a small picket fence. “This is my favorite spot,” Cheryl says. The family spends as much time as they can outside when they’re not working. From a spacious upstairs deck connected to the master bedroom there’s a sweeping view of the ocean.

“I enjoy going down to the beach for walks,” Cheryl explains. “It’s an old neighborhood with a great past and there’s no crime. We love it here.” 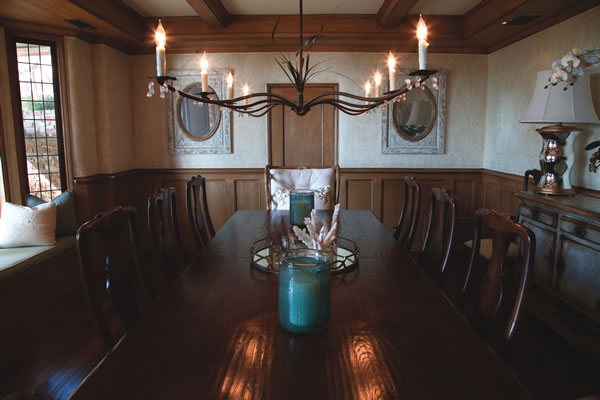 the Cliff Cote is one of the most iconic residences in Laguna Beach. The home was designed and built in the 1930s by Gen. H.N. Proctor as an exact copy of a home he lived in during World War I in France. The walls are constructed from bricks salvaged from the 1933 Long Beach earthquake, and there’s hardly a straight line in sight.

Today, the home is owned by Randy and Carol McPhillips, who immediately fell in love with the house’s exterior. The decor inside, however, was a different story. “The furnishings were very medieval, with coats of arms on the walls, dark wood and old light fixtures,” Randy explains. Over several months, they lightened the color palette, using neutrals to mimic the sand of the beach that sits right outside. The dining room walls are clad in silk fabric; the living room has picture windows framing the beach and ocean below, with 21st century electronics that are mostly hidden, and the kitchen has creamy French limestone pavers.

The family moved from another beachside home in Newport Beach. “We were looking for a home on the water: That was non-negotiable,” Randy says. Three Arch Bay was the favored spot because it was private, close to family, and, of course, near the beach. “Both our children love to surf and paddleboard here. Sometimes there are 8-foot swells,” he explains.

Living areas occupy the main floor with three bedrooms above. A downstairs bedroom doubles as Randy’s office with a quirky spiral staircase to the patio below. Everywhere you look there are interesting roof angles and a total of four chimneys. Patios and planters surround the home, and there’s also a separate guesthouse.

A private staircase to the beach has 98 steep steps leading down to the sand and has become a lounge area with a custom-made cushion, allowing several people to lie back at once and gaze out to sea. This is Randy’s favorite outside spot. He says, “I’ve lived in some great places, but this is truly special. I pinch myself every day that I really live here.” LBM 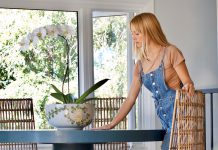