One often-overlooked aspect of Laguna Beach is the array of international cuisine served in town. From Belgian to South African, Caribbean to Argentine, Laguna Beach is home to enough unique and diverse dining options that a local’s palate can never get bored.

Experts around town who prepare these dishes day in and day out are more than happy to share what defines the epicurean scene in four regions around the world. Sample the appetizers, entrees, desserts and drinks that allow our palates to travel the globe, then try your hand at home using ingredients found locally—all while basking in the warmth of our Southern California sun. 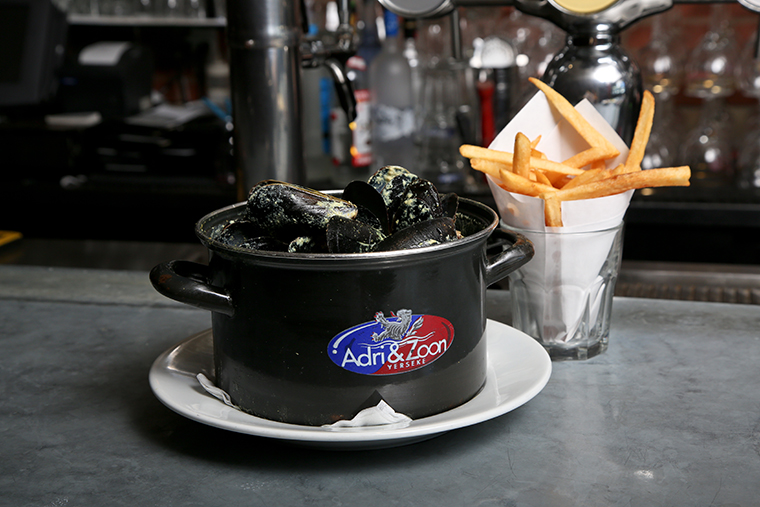 Mondher Elouaer, server/bartender of Brussels Bistro, says Belgian cuisine is defined by beer. It’s not surprising, given that Belgium’s beer-making history dates back centuries. A popular variety brewed just east of Brussels is Leffe, a beer that’s incorporated locally into Brussels Bistro’s “carbonnades de boeuf a la biere de Leffe et ses legumes”—a beef stew in Leffe with vegetables. It’s just one of the many classic dishes you can try at the restaurant; Mondher estimates the restaurant’s menu is approximately 90 percent authentic Belgian, which can be credited to Thomas Crijns, executive chef and owner originally from Brussels.

“Casserole de moules” (a pot of mussels with Belgian fries) is also among the country’s quintessential dishes, one you can find at numerous eateries overseas as well as on the menu at the Forest Avenue bistro. Mussels are a national staple in Belgium, cooked with a number of different flavorings ranging from Hoegaarden beer to curry. Brussels Bistro also serves its fries the old-fashioned way: golden-brown, crispy and generously seasoned, with a duo of sauces (the classic accompaniment is mayonnaise).

One dish you won’t find on the regular Brussels Bistro menu is eel; it’s a delicacy in parts of Belgium, particularly Flanders (around 25 miles north of Brussels). Try your hand in making this specialty at home. For authenticity, Spice Merchants owner Paul Greer suggests using chervil, a member of the parsley family that can be found at his shop. “Chervil has a mild flavor with hints of licorice or anise,” he explains.

It’s a key ingredient in “paling in ‘t groen,” a typical Flemish preparation of eel in a green sauce comprising several different herbs. Most recipes recommend incorporating the fragrant herb mixture of chervil, sorrel and mint into the sauce just a few minutes before you’re ready to serve it atop the fish in order to maintain the strong, fresh flavor and bright green color. 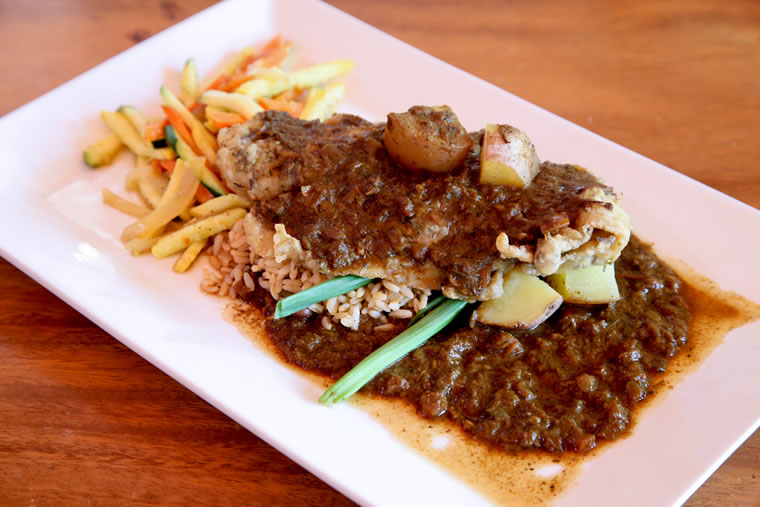 Allspice is “one of the most important ingredients in Caribbean cuisine,” according to Paul, and the majority of the world’s supply comes from Jamaica. The spice, which has notes of cloves, nutmeg and cinnamon, can be enjoyed in everything from savory jerk seasoning, moles, marinades, sauces, stews and pickles to sweeter items like chocolate, fruit salads and spiced hot tea.

The opposing flavor profiles that can be created using allspice are a reflection of Caribbean cooking as a whole. Salted fish is prevalent on the islands (salting was how locals preserved food obtained through trade); sugar is also tied to the region, as it was a major cash crop. Many of the dishes at Eva’s Caribbean Kitchen—the only restaurant in Laguna featuring this type of island cuisine—embrace the historic juxtaposition. You can find several different types of fish, like the blackened salmon, paired with sweeter elements like passion fruit and mango; these are joined by familiar flavors associated with the region, such as jerk chicken and steak.

The food at Eva’s Caribbean Kitchen echoes the amalgamation of culinary influences from the islands. “I am from British Guiana in South America,” says chef-owner Eva Madray. “Six generations of East Indians settled in South America. Because of the ethnic makeup of people—you have the Africans, the English, the Chinese, the Dutch and the Portuguese—there’s a lot to pull from.”

Eva notes that despite this diversity, Caribbean food itself is very simple, characterized by grilled dishes and a lack of butter. However, many items do take a while to create. Take Eva’s West Indian-inspired curry, for example.

“[The curry] takes seven hours to cook, so I have to make it ahead of time,” she adds. “The onion takes an hour; the curry has to roast for an hour. Then I add the onion, garlic, shallots and tomatoes and green onions and that cooks for about five [to] six hours on slow heat.” 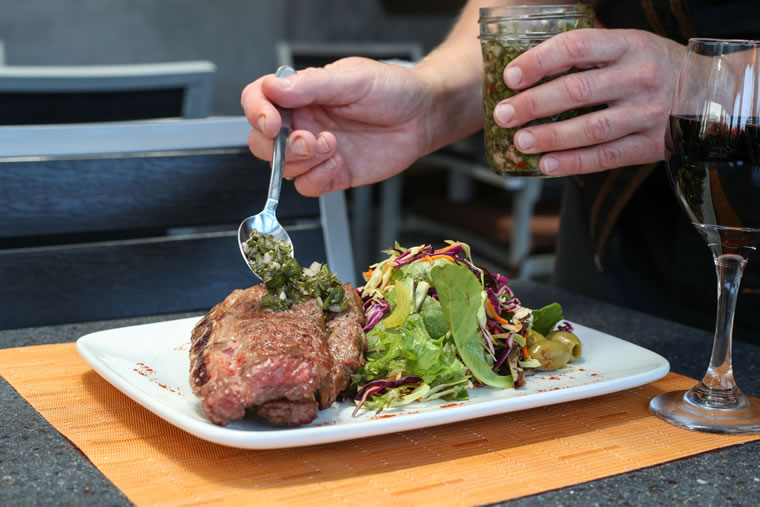 Argentina is a South American country long renowned for its beef. The steak is legendary—“Frommer’s South America” (2010) noted that the average citizen eats more than his or her own weight in meat each year. One of the most identifiable characteristics in Argentine food in the U.S. is the cut of meat. The cooking methods for meat also differ from some more common European techniques, particularly when dealing with short ribs, which are grilled rather than braised.

“We make a thing called ‘matambre’ (a thin cut of beef stuffed with ingredients),” says Debra Sims, executive chef of Argentine restaurant Maro Wood Grill. “You know when you see a fly land on a cow and the very top of it shudders? That’s the piece of meat you use for matambre. It was hard to explain to our [meat] guy that it wasn’t plank steak.”

Sprinkled throughout the menu at Maro Wood Grill are other Argentine staples, like empanadas and chimichurri sauce. Chimichurri is a common condiment in the country; the garlic-fueled green salsa has a touch of acid, courtesy of lemon or vinegar, along with finely chopped ingredients like parsley, oregano, onion, olive oil and chili pepper flakes. You can find it at the restaurant paired with entrees like the short ribs and rack of lamb. To make your own, pick up some cayenne pepper: Paul says it’s a spice typically found in many Argentine dishes and describes it as a “finely ground powder prepared from the seeds and pods of various types of chili.”

Mozambique’s culinary consultant and general manager George Poulos describes South African food as a “cosmopolitan variety of cuisine,” thanks to hundreds of years of African, Indian, French and Portuguese influences. But, as a native of the country, he adds that there’s one flavor that truly defines the palate: peri-peri (also known as piri piri), a sauce made from red chili pepper.

If you aspire to cook South African food, Paul suggests picking up bird’s-eye chili peppers. The traditional chilies are pureed with other ingredients like olive oil, vinegar, salt, pepper and garlic to create the sauce, which serves as both a marinade and a condiment.

At Mozambique, you can sample the authentic peri-peri flavors in the grilled vegetable pops and chicken livers appetizers, and as an entree with crisp fried calamari, a seafood platter for two, Atlantic lobster and a grilled prego steak sandwich.

South African cuisine isn’t defined by just a single pepper, however. “Boerewors” beef sausage (which derives its name from the Afrikaan words for “farmer” and “sausage”) is also ubiquitous in the country; locally, find it at Mozambique served with a mash of Yukon Gold potatoes, tomato-onion saute and asparagus. For preparation of many other dishes, George says wood-firing is a common technique for South Africans. “A big emphasis is made on the freshness of products and an open fire-style of cooking,” he explains. “Most restaurants, either by choice or because of local laws, cook their steaks and fish in infrared ovens. This does not produce as good a flavor as an open wood fire. Charcoal broilers are close, but wood fire is that much better.”

On Ocean Avenue downtown, you can embark on a culinary adventure around the globe with a single step. Cross the threshold of Spice Merchants and you’re greeted with a heady aroma emanating from the huge assortment of spices, herbs and hard-to-find blends. Home cooks can find flavors from around the world; most items are offered in various sizes, so you can buy based on the amount needed for a specific recipe. (949-715-9600; spicemerchants.biz)