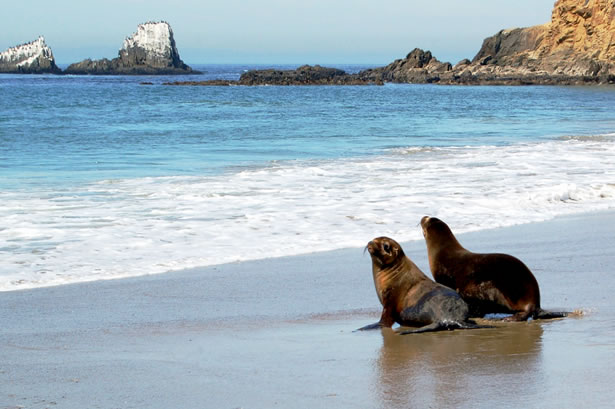 Listen carefully on calm, quiet summer nights, and you may hear the hoarse barks of sea lions calling into the dark from Seal Rock, located just north of Crescent Bay. Sea lions are the most common pinnipeds—fin-footed marine mammals—that cruise along Laguna’s coastline and haul out on our rocky reefs. Curious by nature, sea lions are often seen in the surf zone checking out surfers and swimmers. Although most enjoy the presence of these charismatic aquatic creatures, some worry that their population growth is pressuring already stressed fish populations and impacting the health of our marine ecosystems. 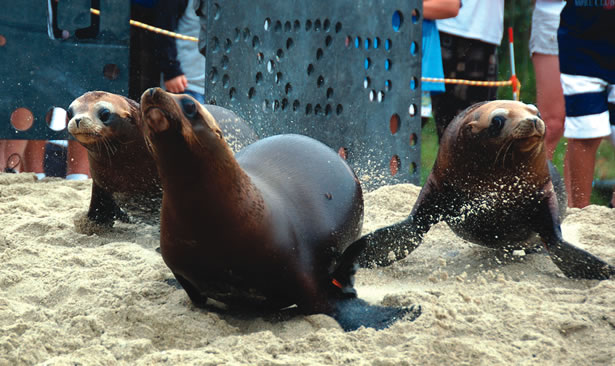 The California sea lion (Zalophus californianus) is the most common of three pinnipeds found along the Laguna Beach coastline. Others spotted include Pacific harbor seals and occasionally a northern elephant seal. California sea lions are highly intelligent and adaptable. As a result, they are often seen on public display in zoos and in marine mammal shows, and are also trained for military operations by the Navy. The California sea lion can be found from the offshore islands of Mexico all the way up to Vancouver Island in British Columbia.

If you kayak or paddle by Seal Rock, you’ll see sea lions of varying ages, including small pups, females and an occasional large male, which is identified by the large dome-like crest on its forehead. Females can grow up to 6.5 feet long and weigh more than 200 pounds, while large males can grow up to 8 feet and weigh more than 800 pounds. The average life span of a sea lion in the wild is 17 years.

The large crest on a male’s forehead is a sign that it has reached sexual maturity and is also how the sea lion earned its formal name, Zalophus californianus, translating to “Californian big-headed.”

California sea lions prefer to breed on sandy beaches, but typically avoid beaches that are heavily used by people. In Laguna, it is exceedingly rare to see sea lions on the beach unless they are injured or sick. If you see a sea lion on the beach in town, keep your distance, and call the Laguna Canyon-based Pacific Marine Mammal Center (949-494-3050) immediately.

Sea lions prefer coastal waters over the open ocean and often stop on small rocky islands along the coast, like Seal Rock, to rest and warm up. Seal Rock is not a rookery (breeding colony), nor are the sea lions in town a permanent local population—they are just resting as they move up and down the coast between the Channel Islands and other coastal destinations. Most rookery areas for breeding and calving in Southern California are found in the Channel Islands.

The California sea lion population has increased dramatically in this century. In the late 1920s, it was estimated that less than 1,500 sea lions lived in California. Historically, humans were the primary predator of California sea lions. Like other marine mammals, such as sea otters, sea lions where hunted heavily in the 1800s and early 1900s for oil and pelts. Commercial hunting was limited in the 1940s and prohibited by the passage of the Marine Mammal Protection Act (MMPA) in 1972. The act prohibited the commercial harvest of marine mammals and also made it illegal to harass a marine mammal. Now that sea lions are protected, their main predators are sharks and killer whales. Since 1972, the California sea lion population has increased steadily at an average annual rate of 5 percent.

Outside of natural predators, the sea lion population can be impacted by oceanographic events such as El Niño, which limits their food supply, and also by water pollution and toxic algal blooms (red tide). 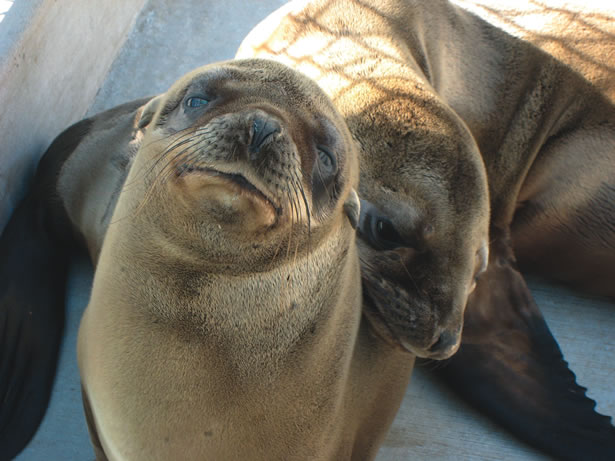 Being mammals, sea lions breathe air, but they are able to stay under water for up to 15 minutes. Efficient hunters, California sea lions feed on a wide variety of marine life: squid, octopus, crustaceans and assorted fish (chiefly non-commercial species). Commonly eaten fish include what we call “bait fish”—anchovies and herring. The amount of marine life consumed by sea lions in the wild is not known. Captive sea lions consume around 15 to 20 pounds of fish per day.

Many commercial and recreational fishermen consider sea lions a nuisance and a culprit in overfishing our oceans. Some also blame them for interfering with fishing and destroying valuable fishing gear by chewing or biting fish off the lines. It has been claimed that sea lions consume billions of pounds of fish each year, impacting California sport fishing and the commercial fish and live bait industry to the tune of $7 million a year.

Given the complexity of ocean ecosystems, cyclical weather phenomena like El Niño, and our long history of hunting and fishing in the ocean, it is very difficult to determine to what extent sea lions are affecting the health of local fisheries. With the explosive growth of the sea lion population in the last hundred years, it is understandable that some would point the blame at sea lions. However, sea lions don’t seem to be directly competing for the fish that is most often caught commercially or recreationally. Further, if the sea lion population was impacting the amount of fish in the sea, it should be limiting the sea lion population growth rate, and that has not been the case.

At the same time, the human population of California has also exploded, and there is compelling evidence that we are overfishing the seas here in California and worldwide.

As Joe Cordaro, a wildlife biologist for the California Department of Fish and Game, puts it, “It would be really hard to find any compelling evidence to blame sea lions directly for the fishery problems we have in California.” LBM