Local pros reveal the best paths to take in Laguna Beach when getting wet, going
fast and running free.

With so many jogging, biking, surfing and swimming routes in Laguna Beach, anyone who lives here will have a tough time picking a favorite trail or beach. We turned to professional athletes—who spend most of their time outdoors—to name their favorite spot. Even these expert riders, runners and watermen (and women) had to think about it for a moment because no matter your level of sport, it’s hard to choose just one favorite path in Laguna Beach.

After he learned how to surf near the Arch at Pearl Street Beach when he was 6, James Pribram graduated to the break just north at Agate Street, a shallow and rocky reef where both rights and lefts pump on south and southwest swells. It also happens to be directly in front of the house he grew up in, which may be why it remains his ultimate wave after years of traveling the globe as a pro surfer and environmentalist. “It’s a real tightknit group of people who surf out there every day and everyone looks after one another,” he says. On a northwest swell, James, owner of Aloha School of Surfing in Laguna, paddles out to another wave just to the north, Three Prong. “It’s even more dangerous than Agate because it breaks at a low tide and a lot of rocks stick up out of the water. But on a big north swell at a minus tide, it’s by far the best wave in Laguna.” If you go: Park at Agate Street and follow the stairs down to the beach.

A 1.65-mile Oak Street lap runs from Oak Street Beach to the Main Beach buoy and back. Many swimmers who lap this long stretch say they see something different every time they plunge into the water among thriving kelp and plate-size garibaldi. Beginners might don a wetsuit and fins. And experienced swimmers, like Lynn Kubasek, who swims two to five times per week, first warm their core with a cup of coffee. “It’s exciting and beautiful—there’s so much to look at,” says Lynn, who trained here for her 2009 cross of the Catalina Channel as well as other marathon swims. The absence of rocky outcroppings makes the hour-route safe for swimmers. “If the swimmer feels uncertain at any point, it’s safe to get out and walk along the sand back to Oak Street,” she explains. Other variables are muscle-building choppy waters and encounters with friendly marine life like seals, rays and leopard sharks. “Sometimes we’ll swim right through schools of fish,” says Lynn, adding that our sharks are harmless fish-eaters and dolphins are the most fun. “You can usually hear them before you see them. You hear a chirp-squeak sound and then you look around for them. Usually they’ve found us.” If you go: Regular meet-ups take place Saturdays at 9 a.m.  (groups.google.com/group/ocopenwaterswims)

Many local athletes keep a close eye on tide charts. Among them is marathon runner Severino D’Angelo, whose favorite run is a long, beachfront route the entire length between Laguna’s Main Beach to Corona del Mar and back. “I can tell you what they are today without even looking,” Severino says of the tides. When low tide makes enough space for running between shore and water, his route begins at his front door in north Laguna, south to Main Beach until he reaches Surf & Sand Resort, returning home for about six miles round trip. “Some people will tell you that sand is the worst surface to run on because it’s the toughest—but to me, wet sand is the best 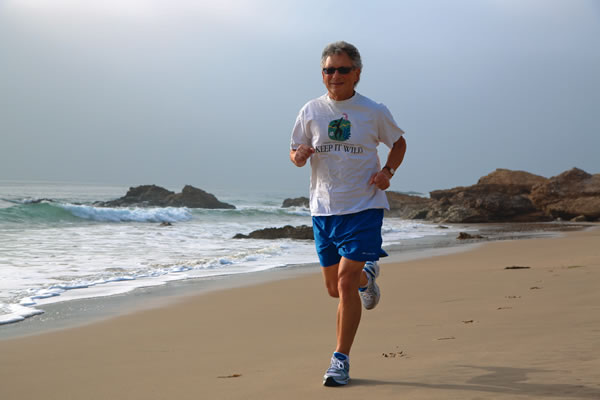 surface to run on. The water cleans it up, it’s very smooth and it’s just enough cushioning to be gentle on your knees.” A longer day continues north through Crystal Cove State Park to Corona del Mar. Terrain options expand to a paved bluff-top path for asphalt running and dirt trails that weave through 2,400 acres of coastal sage-laden backwoods. “The whole world is at your front door,” Severino says. “What is beautiful is you don’t see any buildings.” If you go: Start at either Main Beach, where metered parking is available in Heisler Park, or Crystal Cove, where parking lots are located on Coast Highway north of town ($15/vehicle). 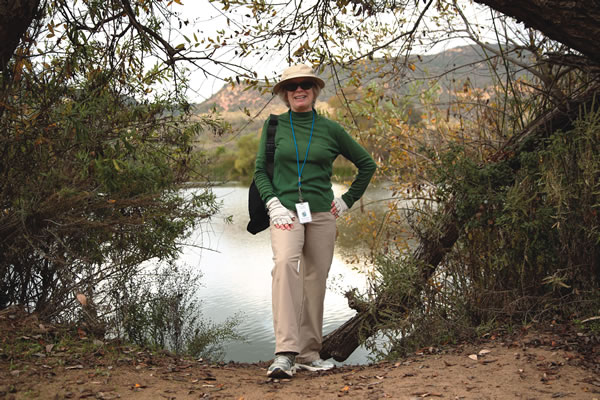 Walking with a spring in her step, Laguna Canyon Foundation volunteer guide JaneAnn Megna leads hikers once a week along one of her favorite trails, a gentle dirt path bordered by prickly pear cactus, fragrant sage and coastal live oak. The destination is a scenic oasis that is a cinch to get to: Barbara’s Lake. This is Orange County’s largest natural lake, named for one of the greenbelt’s primary founders. Its 12 spring-fed acres are a destination for wintering white pelicans and other wildlife. “The Dilley” is one section of the 7,000-plus acres Laguna Coast Wilderness Park designated for hikers only. All levels of hiking prowess can start a journey on the Lake Trail. Beginners enjoy the flat and wide-open one-mile trail to the lake, while intermediates loop for another hour or two into the sunny Mariposa Trail, one of springtime’s best wildflower hikes in the park. It’s hard to get lost, with numerous signs pointing back to the parking lot. If you go: The signed parking lot is on the east side of Laguna Canyon Road just north of the toll road ($3/vehicle). Weekly year-round guided hikes are led for fitness, nature, geology and families (lagunacanyon.org). 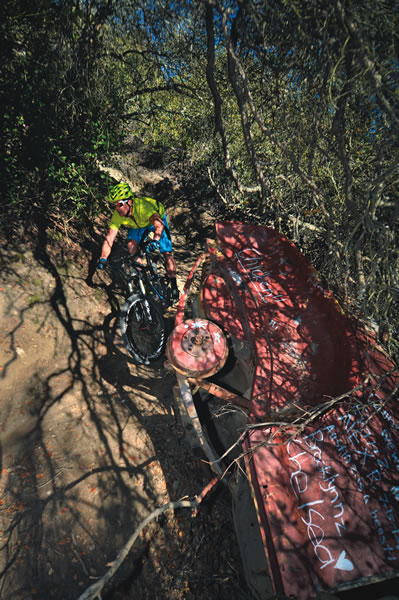 A toppled and overgrown 1947 Volvo is a fascinating relic, but it’s not what four-time Mountain Bike World Champion Brian Lopes is focused on when he’s making one-minute-45-second laps down the ultra steep, experts-only single-track route in the trail network that stems off of Alta Laguna Park. While hikers might pause on the sheer vertical incline to take photos of the trail’s namesake vehicle, Laguna’s most intrepid, padded-up mountain bike riders abruptly encounter it around one of the trail’s rocky hairpin turns. “To go fast down it takes some skill and some guts. And a little bit of risk,” explains Brian, who has been riding in Laguna Beach since 1993, including this trail before it was officially on the map. “It has some fun turns off the top, then it gets into some pretty fast, rough stuff. It slows down a little bit in the middle and then at the bottom you come around a turn and it gets real rocky.” The trail descends approximately 700 feet into an oak grove meadow that blooms fresh with sweet-smelling grass and flowers after a winter rain (keep an eye out for poison oak). As a mellow alternative with sweeping views, the Mathis Canyon fire road puts riders in the same end spot without having to endure the heart-pounding downhill course. To those who are up for it, Brian advises: “Take it a bit slow the first time because there are some rain ruts and, because it is a little bit steep, you can get going pretty quick. You should pretty much do that on any trail, but this one being as fast as it can be, you just don’t want to get in over your head.” If you go: Park at Alta Laguna Park (Alta Laguna Boulevard) and follow Mathis Canyon fire road, looking for the trail marker on your right (parking is free).

Aliso Beach provides a steep slope all year long, making it pro skimboarder Matthieu Thibaud’s go-to spot in Laguna Beach for rushing shorebreak. But the locale doesn’t win on consistency alone. “Aliso is where the shorebreak is the biggest and most powerful in Laguna,” says Matthieu, whose Victoria Skimboards pro model is built for quick turns and air maneuvers. He especially favors the spot during a south swell, when exposed rocks form a sider wave. “You have to turn really fast and a little lower than any other wave when you come to make the turn on the face of the wave,” he explains. Matthieu, who is from France and has traveled the world skimboarding, says he prefers Laguna Beach weather over anywhere else, for its moderate temperatures, low humidity, and where waking up to offshore winds signals the start of an ideal day. If you go: Park at Aliso Beach ($1/hour/vehicle). 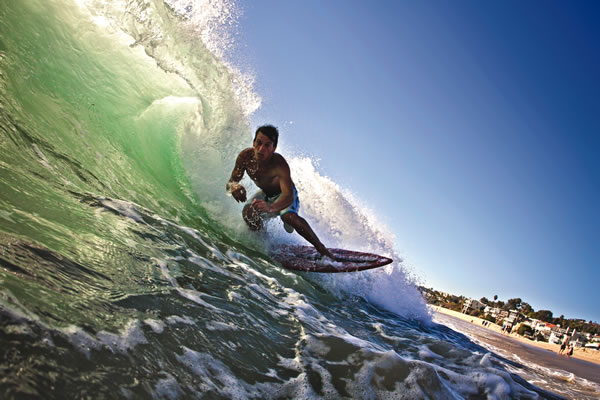 The best dog-walking routes in the world have infinite scents for pooches, sweeping coastline views for humans and enough terrain variation that, whether on four legs or two, walkers will get enough of a workout that they’ll crave a big glass (or bowl) of water afterward. At Moulton Meadows Park on the hilltop, a leash law applies and doggie bags are provided. The mile-long paved footpath along the ridge connecting the Arch Beach Heights and Top of the World neighborhoods is a favorite of certified dog trainer and owner of Every Dawg’s Dream, Mariela Rassouli, because the openness allows plenty of space. “Leash walks around neighborhoods can be stressful to some dogs. It’s nice to have a peaceful path with space where you can move out of the way of other dogs and bicyclists.” With its moderate ascents and descents over the rolling ridgeline, the walk is ideal for high-energy dogs of all sizes. If you go: The trail begins at the corner of Del Mar and Balboa Avenues. Parking on Balboa Avenue is free.

Mornings are a preferred time for many athletes in Laguna Beach. Winds are calm, traffic hasn’t quite picked up its usual pace, and nature flourishes in soft morning light. Plus, when you get your workout in at the beginning of the day, Lynn explains, it makes the rest of the day nicer. For others, that surf or run at dusk is the most peaceful time. As tough as it may be to pick just one favorite route in Laguna Beach, everyone has a favorite time of day. At least some choices are easy. LBM 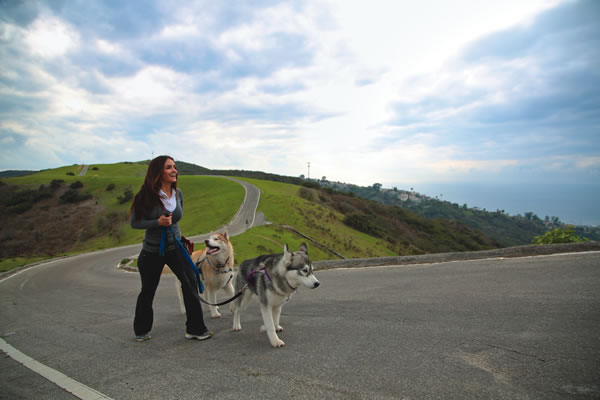 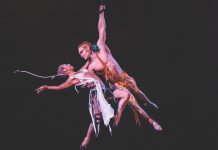