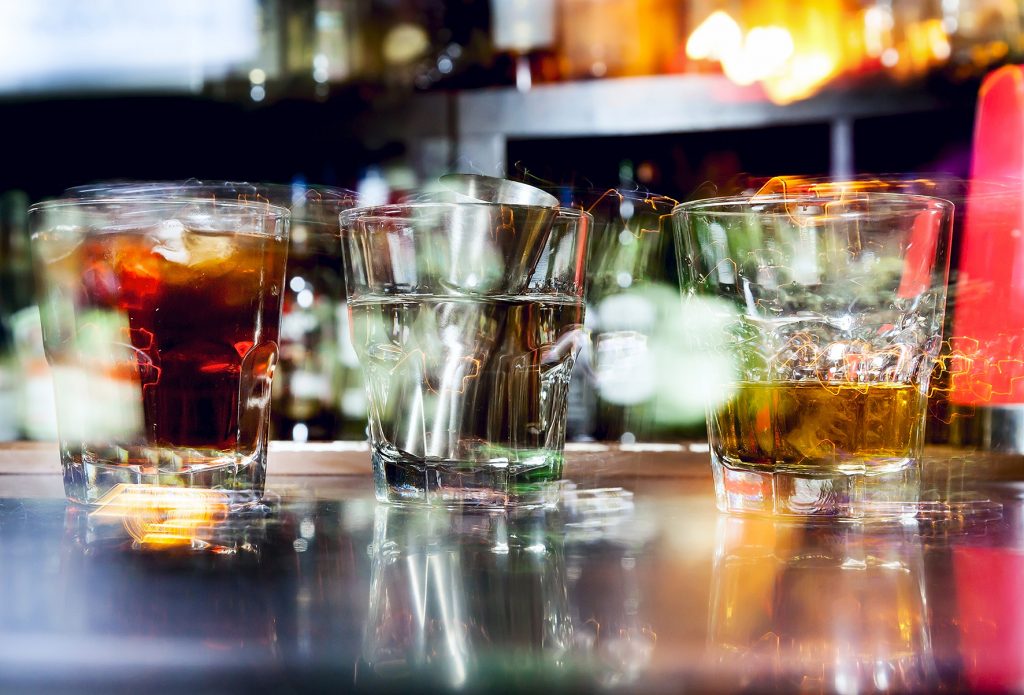 Laguna’s veteran bartenders take a break from shaking and  stirring to share their most memorable stories.

From the outside, Laguna Beach looks like a peaceful town with a laid-back vibe. That might be the case during the day, but once the sun sets over the calming sea, all bets are off. From recently graduated college students to parents, grandparents and tourists, almost everyone of age who has visited, lived or worked in Laguna seems to have a memorable experience involving one of the infamous local taverns. But the part of the story that’s rarely heard is the one from the other side of the bar. Here, a few of our favorite bartenders open up about their most bizarre and unforgettable encounters. 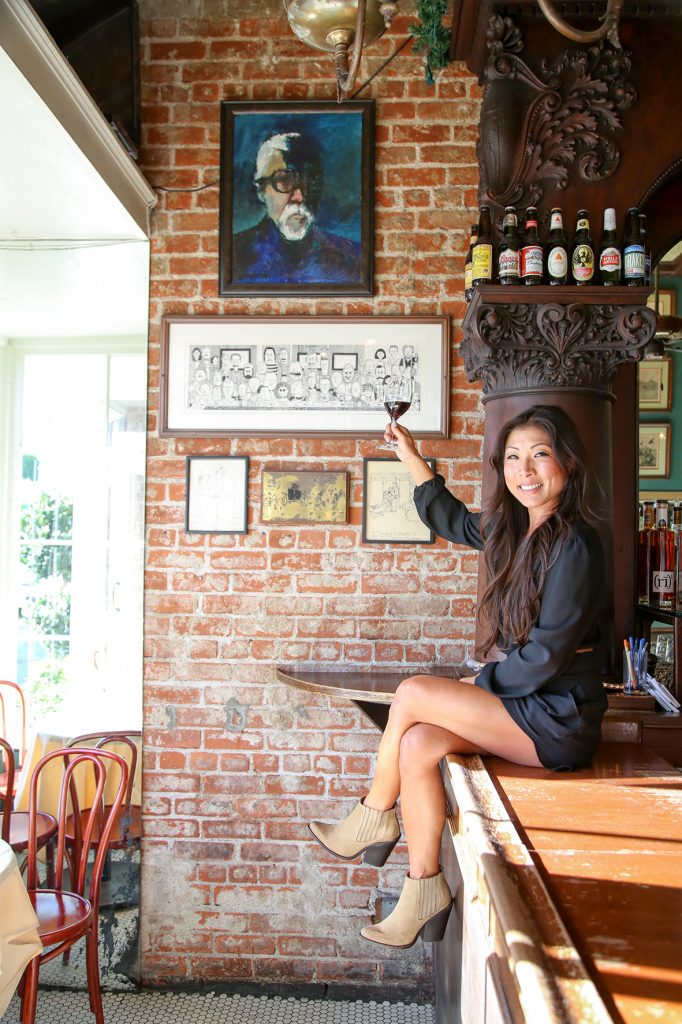 Erin Miyawaki, who was raised in Laguna, has been a bartender at The Saloon for more than 10 years. When asked to share some of her experiences behind the bar, she hesitated, explaining that there is an “unwritten rule of total confidentiality among bartenders.” One story that she was willing to tell—also her fondest memory of working at The Saloon—involves local celebrity Frank Interlandi. 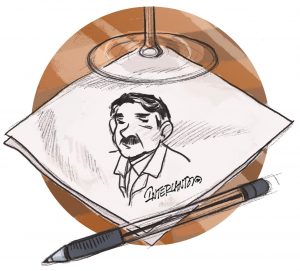 Frank, a longtime Laguna resident, was an editorial cartoonist for the Los Angeles Times from 1962 to 1981. He traveled around town with his twin brother, Phil, who was a cartoonist for Playboy magazine, along with a posse of artists, writers and local fans. Their last stop, regularly, was The Saloon. The bartender at the time, Popo, created a special drink with coffee and liquor to help keep Frank awake long enough to draw up his next batch of cartoons for the following day. This shot, formerly known as the “Popo,” is still served at The Saloon today.

Flash forward to the early 2000s, at the beginning of Erin’s bartending career. Frank, now in his 80s, was still a regular at The Saloon. Erin was interested in getting to know the locals, especially the frequent patrons, but Frank was known to be particular about who he socialized with. He’d come in, order a glass of wine, and sit at his designated table, resisting conversation with her. She was determined to win him over.

One day, Erin’s father informed her that Frank and her uncle were good friends from LA. When Frank made his next appearance at The Saloon, Erin made sure to send greetings from her uncle. For the first time in her experience, Frank walked right up to the bar and looked straight into her eyes—she could see him light up inside.

Not long after, Erin and Frank began playing a subtle game. When he came in and ordered a glass of wine, Erin would deliver it to him with a napkin that had one squiggle drawn on it. Frank would take out his pen and complete the doodle. Sadly, Frank died in 2010, but his portrait still hangs in The Saloon right above the table he always occupied. 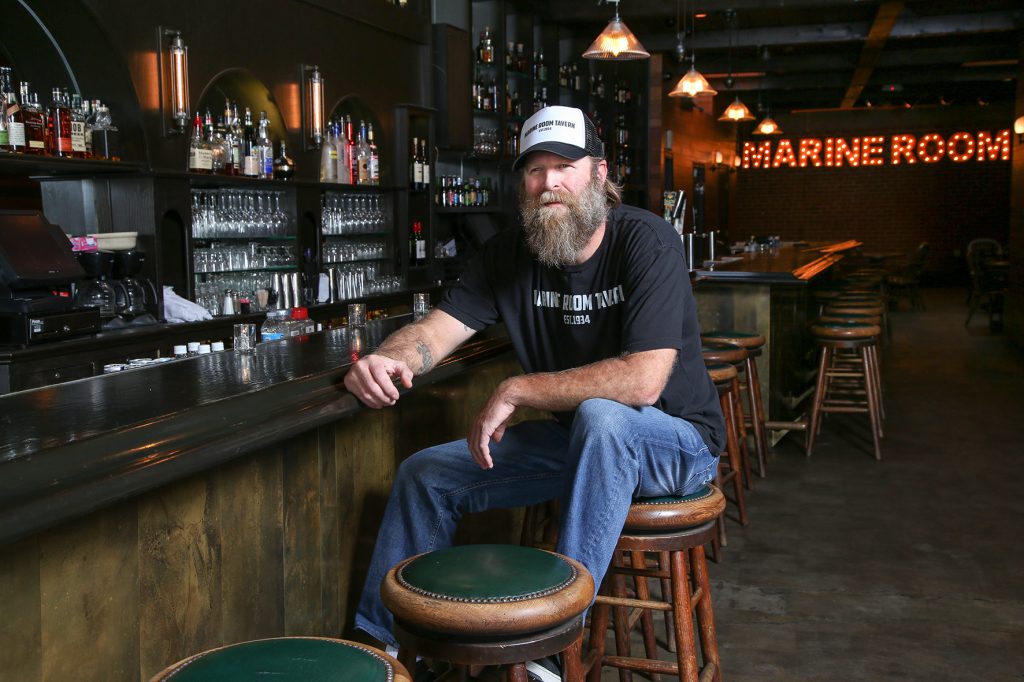 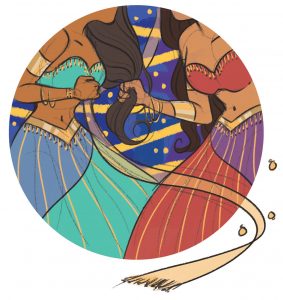 Battle of the Belly Dancers

Robby Boyd has been a bartender at Marine Room Tavern for more than 20 years. After working in a bar for so long, he finds that weird things just don’t seem so weird anymore. However, one encounter that stands out for him took place a few years ago during the annual Patriots Day Parade, when people swarmed into Marine Room (which is conveniently located near the end of the route).

Parade participants including veterans, City Council members and costumed belly dancers socialized while indulging in margaritas. Robby was catering to a packed bar when he overheard one of his neighbors yelling from the window, “Fight! There’s a fight!”

He dodged through the crowd to find two of the belly dancers flailing around on the sidewalk. “There were veils and jingle bells flying everywhere,” Robby recalls. The altercation came to a quick halt as local police officers arrived on the scene and separated the two ladies.

“I’ve never seen anything like it,” he says. In a small town like Laguna, news travels fast—not long after the that Patriots Day Parade incident, there was a local play put on called “Lagunatics” that curiously included a scene where two belly dancers “beat the daylight out of each other. 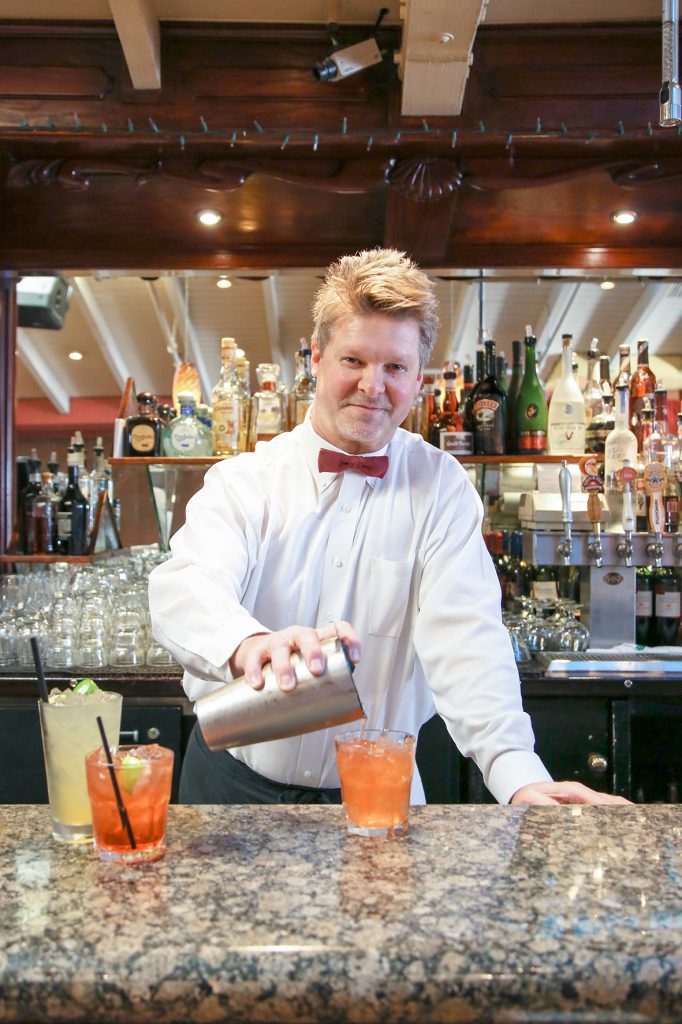 As the oldest restaurant in Laguna Beach—it opened back in 1918—The White House has seen everything from run-of-the-mill bar brawls to the passing of Olympic torches. It’s also had its fair share of gossip-worthy celebrity sightings. Just ask John E. Daub, who has crafted cocktails for White House patrons for more than 30 years. 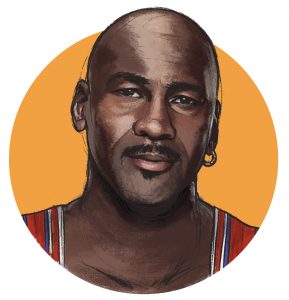 When prompted, he rattles off famous names as if he’s reciting the alphabet: Heather Locklear, Kobe Bryant, O.J. Simpson and Richie Sambora all have quenched their thirst at this favorite local watering hole; Queen Latifah grabbed lunch solo one afternoon; Slash from Guns N’ Roses has stopped in multiple times; and Jimmy Buffett even came by for a drink and ended up playing his famous “Margaritaville” song with the house band. But there’s one famous face that made a particularly strong impression on bar- and beach-goers alike when he visited Laguna one afternoon.

As the story goes, Michael Jordan and his friends were staying at The Ritz-Carlton, Laguna Niguel. After riding their bikes down to Main Beach, they joined a game of pickup basketball—much to the surprise of the others  playing on the court. When they were finished shooting hoops, Michael and his friends asked the other players where they could grab a drink. Naturally, they pointed the group right up the street to The White House, and the rest of the evening became the stuff of Laguna legend.

“[He was a] super nice guy,” John E. says. “He was signing autographs for everybody, sat down and was having a blast with everybody and ended up staying until close—2 in the morning. We have a picture of [Michael and his friends] leaving. … They had to call a van from The Ritz to pick them up with their bikes and everything.” 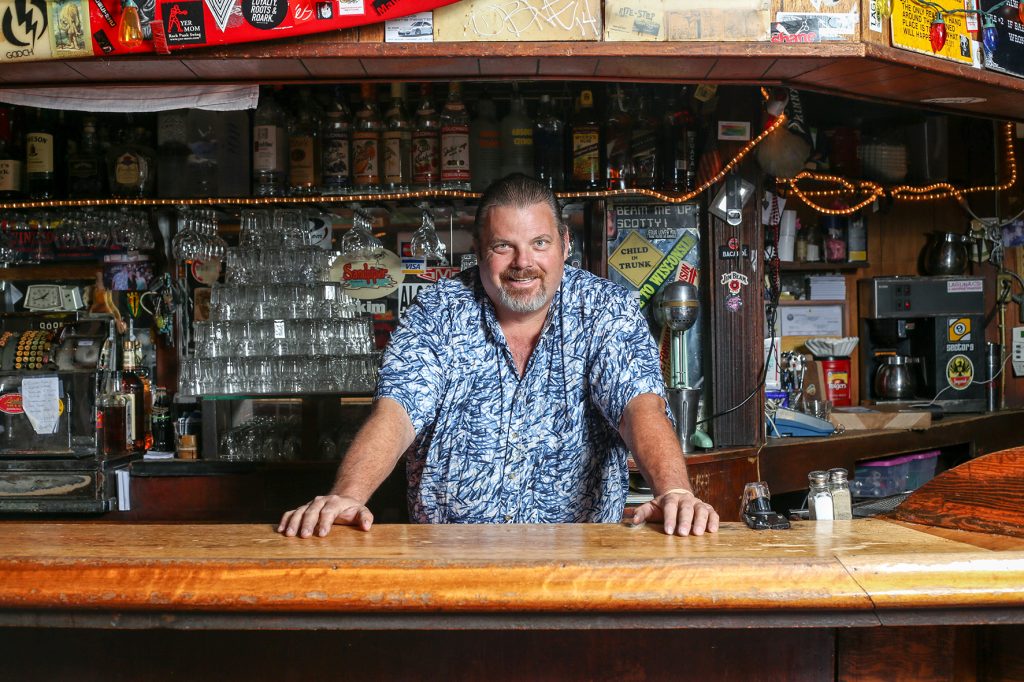 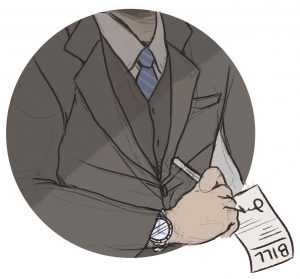 Bradford Charlton is a Laguna local that knows the bar scene like the back of his hand. His bartending career started in 1988 at Marine Room Tavern, and for the last decade or so, he has been a loyal Sandpiper employee. Although Bradford has witnessed his fair share of deviant acts, drunken debaucheries and altercations, his favorite memories were made by some of the amazing people he has met on the other side of the bar.

On a typical, busy night at the Dirty Bird, an extremely tall, athletic guy approached the bar with what appeared to be his date. It wasn’t until the man closed his tab with his credit card that Bradford recognized the name of a tech billionaire. As the couple gathered their belongings and got ready to leave, the man said to Bradford, “You know, the life of a CEO is not all it seems to be. Coming out and having a good time is 10 percent of my life, the rest of it is 90 percent of hell. Ninety percent of your life is fun.” He left, and Bradford couldn’t believe a billionaire envied his crazy lifestyle. 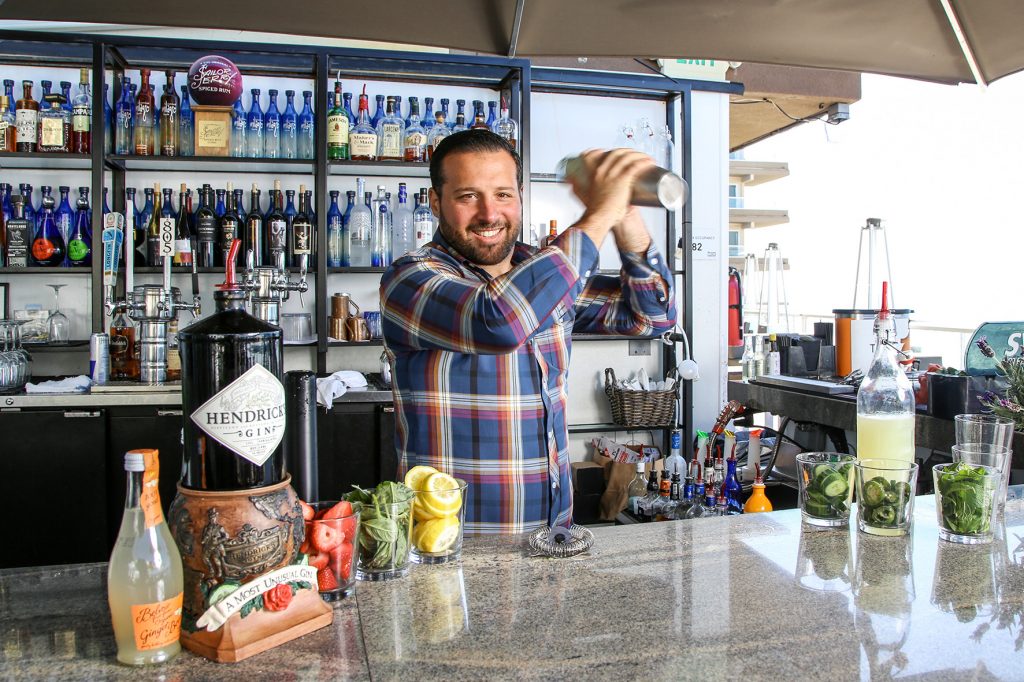 The Deck is a beautiful spot, relatively new—in comparison—to the Laguna bar scene. With one of the best views in town, it’s a haven for both tourists and locals. Dave Anderson has been on staff since it opened a few years ago, and has served a wide variety of visitors. 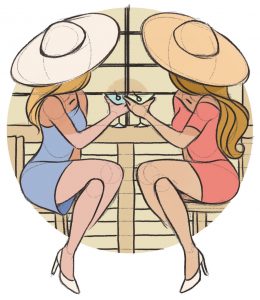 On one beautiful afternoon that happened to be Valentine’s Day, Dave was trying to keep up with serving the crowds when he was approached by “The Real Housewives of Orange County” crew members. The stars of the show were coming to film at The Deck, and they asked if Dave would serve and host them during their visit. Dave accepted, although at the time he wasn’t exactly sure what he was getting himself into.

After the waiver was signed and he was set up with a microphone, he began serving the ladies, trying to ignore the cameras and onlookers. When the crew packed up their things and left, Dave went on with his work; as weeks passed, he eventually forgot all about the taping.

Five months later, he pulled out his phone during his break to find more than 20 text messages and missed calls from people he hadn’t spoken to in years. Initially he was worried that something bad had happened, but then he quickly realized that the TV show had finally aired. Dave’s friends insisted he watch the episode.

When he finally agreed, he was slightly embarrassed to find his “rear end” got a pretty substantial amount of airtime, as the cameras caught his behind on film every time he bent over to serve a drink.