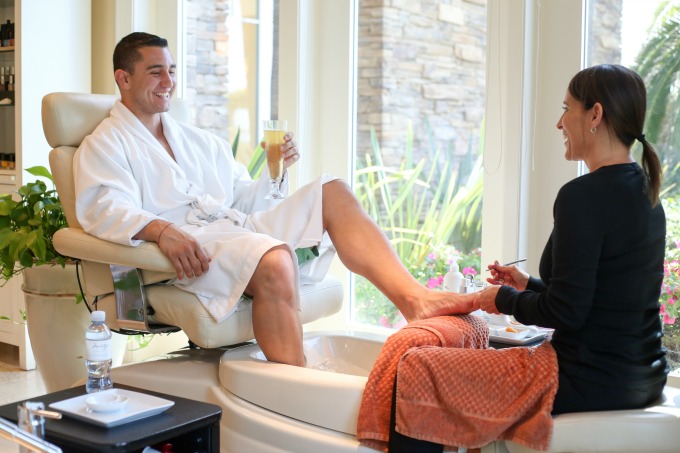 A broad range of services are just masculine enough to pique the interest of local gentlemen.

It’s no secret that Laguna Beach is an ideal spa destination, with a bevy of oceanfront luxury resorts that offer a variety of treatments to soothe and pamper clients from head to toe. While female locals and visitors alike have long understood the allure of a heavenly treatment in a spectacular location, men, too, are increasingly booking spa treatments around town today—whether it’s due to the fact that they’re less wary of indulging in their feminine sides or have simply found inspiration in their female counterparts when it comes to modern self-care. And while the guys may pass on the polish post-pedicure, they’re clearly not afraid to get their proverbial feet wet in many different ways at the spa, as evidenced by the growing number of services that cater to both women and men. Here, we round up some of the best guy-approved spa treatments in town for a man looking to indulge.

“About 40 percent of our guests are male,” says Stela Tasu, supervisor at The Ritz-Carlton Spa, Laguna Niguel. Most men venture into the spa because The Ritz-Carlton is a popular convention and meeting location for companies visiting from out of town, she says, and they’re drawn to the luxury amenities. “We do have a great number of male guests that come in just to use the facilities,” Tasu adds, referring to the ocean-inspired spa’s steam room and sauna, which are complimentary to overnight hotel guests and attract men post-workout at the resort’s fitness center.

After a long day of meetings or a particularly strenuous weight-lifting session, the Beach Stone Therapy treatment is most frequently requested by men at the oceanfront spa. During this service, smooth stones are heated and then placed on strategic areas of the body to relieve tension and aching muscles. Next, the stones are incorporated into a massage, and clients can decide how intense they would like the pressure to be. “Men typically like the Beach Stone Therapy because it is a deeply relaxing experience induced by the heat from the massage stones,” Tasu says. “This warmth radiates into the muscles, relaxing them more fully and allowing the therapist to work deeper into the muscles.”

For a man who loves a regular massage, is serious about wellness and is willing to explore other treatments like facial masks, The Pearl Laguna offers a weeklong detox program that combines yoga, hiking and meditation with daily massage and other specialty spa treatments like Epsom salt foot baths. The Laguna Canyon retreat can house up to 14 people each week—out of which three or four are typically male clients, according to Assistant Manager Anna Hunt, who adds that the establishment has seen an increase of male clients who are “interested in cleansing, healing and slimming down their bodies for optimum health and balance.”

And one of The Pearl’s attractions is undoubtedly the daily 60-minute therapeutic massage, which can be customized according to guests’ needs. “Men usually go for the deep-tissue massage,” Hunt says. “It really gets into the muscles.” Additionally, The Pearl offers a variety of daily, self-applied homemade facial masks for guests, which are available before or after the massage and designed to first exfoliate and then gradually moisturize as the week progresses. And this treatment appeals to guys, too, according to Hunt: “The men apply the masks, just like our women guests. They really get into it.”

As upscale men’s grooming and skin care products, which include items like anti-wrinkle eye cream, beard conditioner, luxe razors and high-end shaving brushes, have become ubiquitous, facials for men, too, have also become mainstream at area salons and spas. And they’re not just feminine facials marketed for men; rather, they cater specifically to men’s skin care needs. At Laguna’s Hand & Stone Massage and Facial Spa, for example, the men’s classic facial treatment is designed to alleviate razor irritation in addition to cleansing, toning and hydrating the skin.

At The Ranch at Laguna Beach, the brand-new, 3,000-square-foot Sycamore Spa sees plenty of male clients, thanks, in part, to its nine-hole golf course, which draws a good number of guys who first flock to the property for a leisurely round. Of course, the male-specific facial treatment on the menu helps, too. “Our Gentlemen’s Facial addresses all kinds of skin issues,” says Kelly Dwyer, spa manager. “Whereas most women have a particular point of focus in their facials, like anti-aging, men’s facials include a little bit of everything.”

The 60- or 90-minute treatment can be customized according to a client’s needs, and guys can even opt to select the products used during their facial, which hail from high-end lines like Hydropeptide and Comfort Zone. “Within those lines, there are options to customize based on the goals of the guest: anti-aging, clarifying, brightening, hydrating … and any combination in between, so that we can get the perfect facial for each guest’s skin,” Dwyer says. And the service, which also includes a facial massage, was added not only to help with men’s skin issues, but also to ensure inclusivity at the spa, according to Dwyer: “Facials … are so often thought of as catering to female clientele, and we wanted to make sure that everyone was able to come and relax.”

A Mani-Pedi for Men

Men are also welcome at area nail salons, of course, and it’s not entirely unusual to see guys seated at a manicure or pedicure station. But most salons will still use fragrant lotions, oils and scrubs during these services, which, ultimately, are designed for women—not to mention the fact that they’re priced specifically to include a coat or two of nail polish. At local luxury resorts, however, men may rest assured knowing that when they book a manicure or pedicure, it’s tailored specifically to their fingertips and toes.

“There has been a growing trend of men frequenting spas for the past several years, breaking down barriers, creating a fresh demand for gender-specific spa offerings,” says Mallory Baker, spa and salon manager at Montage Laguna Beach, who adds that the gentlemen’s mani-pedi services were created specifically with the spa’s male clientele in mind. The pedicure begins by immersing the feet in Body Bliss’ Turquoise Sage Foaming Salt Soak, which releases sage, lavender and mint fragrances. Next, toenails are trimmed and shaped and the feet exfoliated before being moisturized with a cooling peppermint-infused balm and then massaged. The Gentlemen’s Manicure includes nail trimming, shaping and buffing, as well as a hydrating hand scrub and massage. And guys can enjoy a complimentary draft beer during either service.

Meanwhile, at Monarch Beach Resort’s recently opened Deborah Lippmann Nail Salon, which is part of the new Miraval Life in Balance Spa, guys are becoming increasingly comfortable booking the men’s manicure and pedicure—perhaps that’s because they’ve started to see that the service is both relaxing and effective. Michelle Frye, the spa’s director, credits Southern California’s sandal weather for the influx of men at the spa, who come in because “… they want their feet to look good,” she says. “Some do it to impress someone special, and others are doing it to alleviate pain from calluses, cracked heels and ingrown toenails. We see how excited men are when they see how visibly changed their feet are after the first experience, and most say they are now hooked,” Frye adds.

Both services incorporate celebrity manicurist Deborah Lippmann’s signature products, which incorporate some gender-neutral scents like rosemary, thyme and kokum butter, which has a slightly earthy, nutty odor. And, according to Frye, while the mani-pedi services don’t use products specifically tailored to men, both allow more time for guy-approved steps like the callus removal and massage, as opposed to polish application.

Whether you’re looking to indulge in a therapeutic deep-tissue massage, a skin-brightening facial or a relaxing foot massage following a pedicure, one thing’s for certain, guys: You won’t be the only man at the spa.