Started by two bewhiskered boys on a mission to create the ultimate in shaving creams, Cremo Co. is taking the skin care market by storm—one stubbly face at a time. 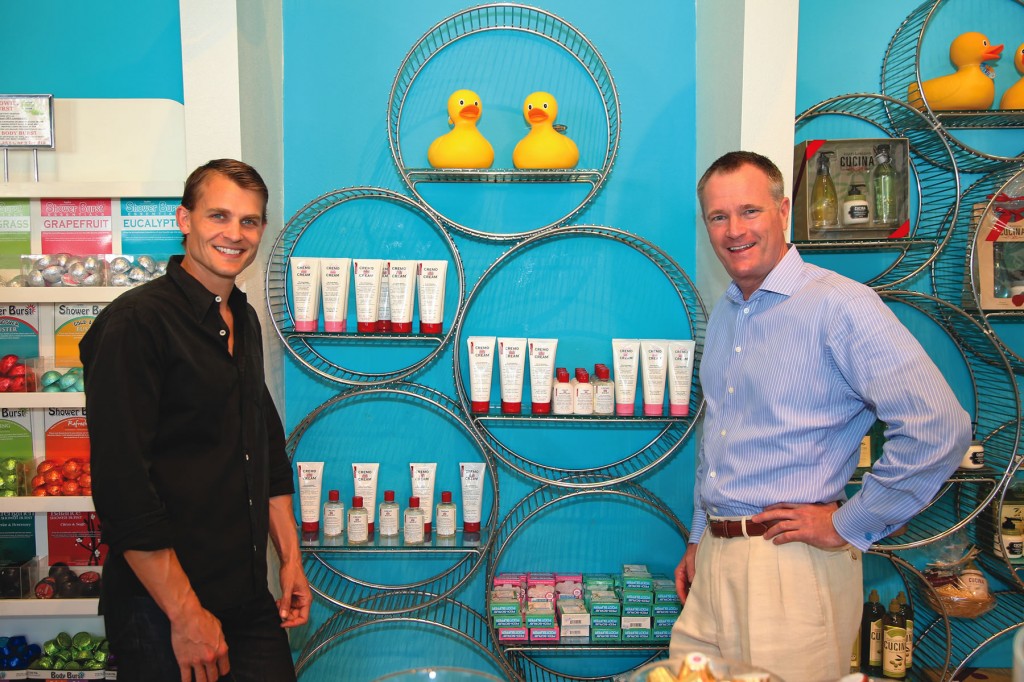 Kyle Schroeder and Mike Boone liken their working relationship to a tortoise and a hare. “Kyle is the tortoise, and I’m the hare,” Mike says. “So together, we’re average speed.” And the two Laguna Beach-based entrepreneurs who started Cremo Co., a skin care company known for its no-fuss, affordable shave cream, Cremo Cream, are completely fine with growing their business at a slower pace and being the small guys in a multibillion-dollar global market.

In fact, that’s what makes Cremo Co. so humbling. While the company’s roots have been embedded in town since its founding in 2007—local retailer Bubbles was the first shop to carry its products—the brand also has paved a countrywide route, landing its products on the shelves of Walgreens, CVS and Walmart, among other national chains. “We’re probably going to have to get an office [in town] soon,” Kyle shares, adding that the two business partners work mostly out of their homes so that they can still enjoy their personal hobbies. “We’ve grown organically, so that’s why it’s taken us [a while].” Whatever speed they’re moving at, however, it seems to be working.

Laguna Beach Magazine: How did you guys meet each other?
Kyle Schroeder: After I graduated [from business school] … I got my first job, … but long story short, I kind of hated it. Then I started modeling … and ended up coming back to LA and was bartending at Neiman Marcus in Beverly Hills, and Mike and I randomly met. We just became friends, and he told me how he had this shaving cream. He gave me a sample, and I loved it. At the time, he had started [the business], but hadn’t done much with it. We were friends for a while … and eventually it got to the point where he hired me. That was in 2007.

LBM: Mike, since the product was your invention, what was your inspiration behind it?
Mike Boone: Well, I used to buy a very expensive product a while ago that was made with mink oil, and it was a shave cream, and it gave the most extraordinary shave. But it was hideously expensive, and it was also troublesome to think that minks were involved. … One year, I went to order it, but the company had gone out of business. … I then went to Neiman Marcus and Barneys and bought all the best shave creams they had, only to find out that they were all made the same way, just packaged differently.

LBM: I’m guessing that Cremo Cream is not made with mink oil, then?
KS: No. … It’s [also] not animal-tested. We’re not certified vegan, so we can’t say it, but we can say we’re vegetarian.

LBM: How did you guys come up with the perfect concoction?
MB: [We work with] a very high level of chemists. … The key to [our product] is to make it slippery, which, when you look at what’s out there right now, everything’s not slippery—it’s foamy. Foam is filled with air; air is not a good lubricant. So we’re creating a better, more useful product versus something that looks pretty and smells pretty. We also use moisturizers that are different, lubricants, skin conditioners [and] emollients.

LBM: Where can shave cream seekers find Cremo Cream in town?
KS: CVS across from the Montage, and Bubbles. Cathy [Wilkinson, the owner of Bubbles,] has been so generous and has continued to carry us.

LBM: Cremo Co. also offers ladies’ shave cream as well as face moisturizers and face washes. What’s next for the company?
MB: I think what our positioning is … we’re a solutions provider. We’re going to be coming out with a razor that’s in the works. … It’ll be the best in class … really well-priced that does the job. LBM