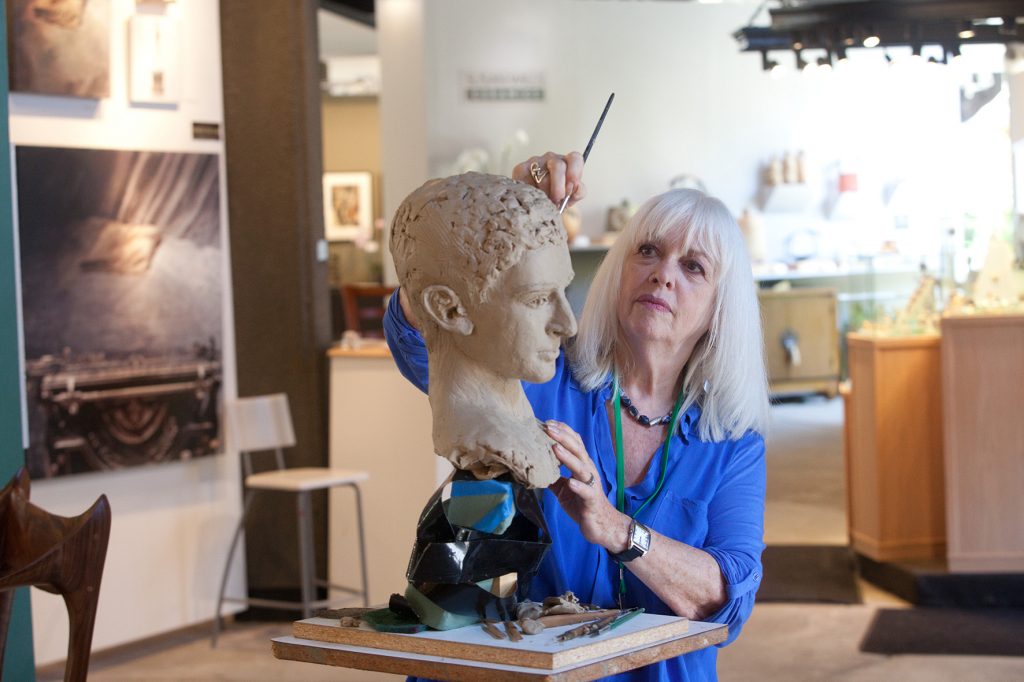 Annual festivals shine this summer with longtime traditions and new activities that are sure to impress locals and visitors alike.

With three renowned art festivals attracting visitors from near and far, summer is when Laguna Beach comes alive. The ocean air buzzes with excitement as festivalgoers make their way up the canyon to explore this showcase of the best artwork in Laguna, Southern California and beyond.

Some might even say the Festival of Arts, Sawdust Art Festival and Art-A-Fair are synonymous with Laguna; so deeply rooted in the community that they are immediately associated with this artist’s enclave at the mere mention of the town’s name.

The festivals each bring a unique character while also complementing one another. The Festival of Arts, a juried art show that started more than 80 years ago, presents premier artists from southern Orange County and the acclaimed Pageant of the Masters, a show of “living pictures” as costumed actors pose to recreate paintings on stage. Art-A-Fair—which dates back to 1966—is also a juried show, accepting exhibitors from anywhere on the globe, although most hail from California. Sawdust Art Festival, which broke away from the Festival of Arts in 1965 in protest of that show’s jurying system, remains nonjuried, but artists must live in Laguna to exhibit there.

This year, the Festival of Arts starts July 6, Pageant of the Masters begins July 9, and both end Aug. 30. Sawdust and Art-A-Fair both run from June 27 to Aug. 31.

Laguna residents and vacationers may want to consider a $23 Passport to the Arts, which allows unlimited entry to all three festivals, all summer long (excluding Pageant of the Masters). A jam-packed lineup of art workshops, concerts, chef demonstrations, wine tastings and other special events provide a perfect excuse for multiple return visits. “We’re like an art mall in a way,” says Fred Sattler, president of the Festival of Arts. “… You can pick and choose or take them all in.”

Founded in 1932, the Festival of Arts now features 140 award-winning artists and presents a Junior Art Exhibit, countless hands-on art classes, demonstrations, a music series, artfully prepared cuisine at Tivoli Terrace and, of course, the Pageant of the Masters in Irvine Bowl, the festival’s amphitheater.

“I think our ambience here, both on the grounds and in the bowl, is distinctive,” Fred says of the site with plenty of shade and open green space. “We’ve got a very different feel.” 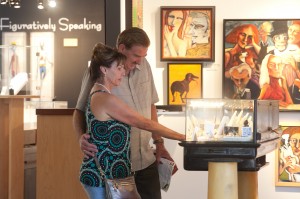 In addition to the setting, other differences make this festival stand out. Only original artwork is allowed—no prints or reproductions may be exhibited—and organizers pride themselves on the festival’s quality. Jurors select exhibitors and then score artists again during the summer, asking about 30 percent to repeat the jury process the following year. “We invest a lot of time and effort in that process,” Fred says. “… We like to think we have the best that southern Orange County has to offer.”

A mix of mediums is represented from jewelry and sculpture to classic oil and watercolor paintings, photography, printmaking, digital and mixed-media art, with about 15 to 30 new exhibitors each year. “We think it’s important to have new artists because they bring new energy to the show,” Fred says. Among those joining the festival this year is Laguna resident Sean Hunter Brown, who specializes in surf and ocean photography. A surfer for 30 years, Sean’s understanding of the ocean comes in handy as he captures waves breaking wildly through the camera lens.

Even artists returning from previous years must present new work, and exhibitors must keep their booth looking fresh, making pieces to replace those that sell. “[So, visitors] are not just looking at the same exhibit all summer long,” Fred says. “We combine familiarity with the excitement and anticipation of something new and unknown. … I think the more you come, the more you see.”

Visitors also have the chance to interact with artists. Lance Heck, who has exhibited at the festival for more than 30 years, enjoys talking with passersby about using Old World techniques to make his contemporary jewelry. “That’s what kind of keeps it exciting for me,” says Lance, who began coming to the festival as a boy, making the drive with his parents from Costa Mesa. He still recalls the smell of oil paint as his family walked among the booths. “Little did I know I’d be exhibiting there, too, years later,” he says. “… It’s kind of like a family: Once you’re in, it’s hard to leave. … I feel lucky and honored to be a part of it.”

The Sawdust Art Festival, too, has grown from its beginnings in the 1960s when artists used to camp out on the grounds—which is illegal now—to a full-time staff and the latest technology (tickets can be purchased online and an app is in the works).

This year marks the Sawdust festival’s 48th edition, presenting more than 200 exhibitors around the wood chip-covered grounds including 20 or so new artists selected by lottery. “I’m looking forward to the new artists,” says Cynthia Fung, Sawdust spokeswoman. “It’s great to have new energy and new artwork on the grounds.”

Even the work presented by longtime exhibitors will change as the artists develop their skills, learn new techniques or become inspired by travels or other artists. Also, different themes keep the festival fresh throughout the summer, with live music and art classes embracing Surf Day, Country Western Day, Beatles Day and more.

Cynthia says Sawdust’s diversity sets it apart from the other festivals. “Because we’re a nonjuried art show, you never know what you’re going to find on the grounds,” she says. 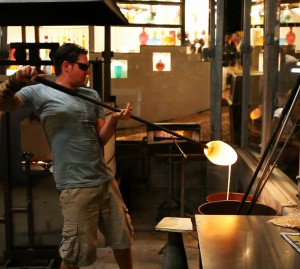 Art mediums range from paintings to photography, jewelry, clothing and textiles, ceramics, glass, wood and metal sculpture, surf art, scrimshaw and more. One of the festival’s most eye-catching aspects is the artist demonstration area near the entrance. “The glass blowing demonstration booth is a big draw,” Cynthia says. “It’s something that you can’t see very often and you’re seeing it live. … It’s molten glass on a stick and, out of that molten glass, they shape these amazing, gorgeous pieces.”

Christopher Jeffries, one of the glass blowers who demonstrates his art form, says the crowd becomes kind of hypnotized by the fire, smoke and movement, and their reaction to seeing a piece come together in a matter of minutes is rewarding. “[I get] a lot of ‘oohs’ and ‘ahhs,’ ” he says. “Everybody’s enamored … and really drawn to it.”

Hands-on art classes also make the festival dynamic. Starting three years ago, Sawdust began offering classes—most are free with festival admission—to let visitors tap into their own inner artist. “It’s part of our vision to educate people about the arts,” Cynthia says. Children’s Art Spot features arts and crafts for the kids; Studio One Painting offers a wide variety of art workshops in painting, drawing, printmaking, tie dye and more for ages 7 through adults; and the Ceramic Center provides one-on-one instruction at the potter’s wheel for all ages.

Making a piece of art to take home serves as a special memento of the festival. “You create it, so it’s your own,” Cynthia says. “You experience what your own hands can make. … But also, you appreciate artwork—you look around the grounds with a different sense.”

Also celebrating its 48th year, Art-A-Fair presents about 125 artists, predominantly from California, although some have come from other parts of the U.S., Mexico, China and Switzerland over the years, says Art-A-Fair President Mike Cahill.

“We’ve got about 30 brand-new artists coming this year—roughly 25 percent of the show is going to be new artists—on top of which, most of the artists try to have something new from the previous years,” Mike says.

To ensure quality, jurors go through the festival to score each booth twice during the summer, only inviting back the best exhibitors. Artists represent a broad set of mediums including photography, drawings, paintings, ceramics, sculpture, glass, jewelry and more, Mike says, noting a trend of more mixed-media artists. 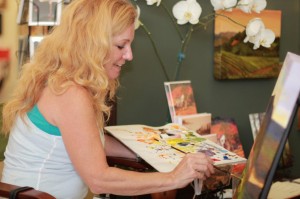 The artist booths are set in a garden ambience, one of many aspects that festivalgoers appreciate. “They like the kind of laid-back atmosphere,” Mike says. “… They [also] like the broad price range.” Art-A-Fair offers items from $5 greeting cards up to pieces worth thousands of dollars.

Like the other festivals, Art-A-Fair presents live music—bands play on Thursday and Friday evenings and all day on the weekends, with genres ranging from pop to blues to steel drums. Art workshops—added four or five years ago—also are offered every day, with two- and four-hour sessions available. The instructor and medium varies by day, from oils to watercolor and collage. Some artists also demonstrate their techniques, giving visitors a chance to see a masterpiece unfold before their eyes. And, new this year, chalk and street art events are planned starting July 27 and continuing for five Sundays until Aug. 24. One artist will create chalk drawings on the sidewalk near Laguna Canyon Road, while a contest spot for five artists will be set up near the entrance gate. Tentatively, organizers also plan to have a street artist creating a 3-D mural inside the gate over two or three Sundays. After walking around to see the exhibits, visitors are sure to work up an appetite. Tivoli Too!, on the Art-A-Fair grounds, serves Southwest cuisine in a courtyard atmosphere. And, Mike shares, “Their margaritas are to die for.” “We’re the best-kept secret of Laguna Beach,” Mike says. “Everybody knows about Sawdust and everybody knows about Festival [of Arts], but even some Laguna Beach residents have never heard of Art-A-Fair.”

Whether discovering a fair for the first time or making your annual visit, Laguna’s trio of festivals provide a dream destination for art lovers and artists alike.