Once nearly extinct, pelicans are back in force thanks to protection efforts.- By Chad Nelsen, Surfrider Foundation Environmental Director 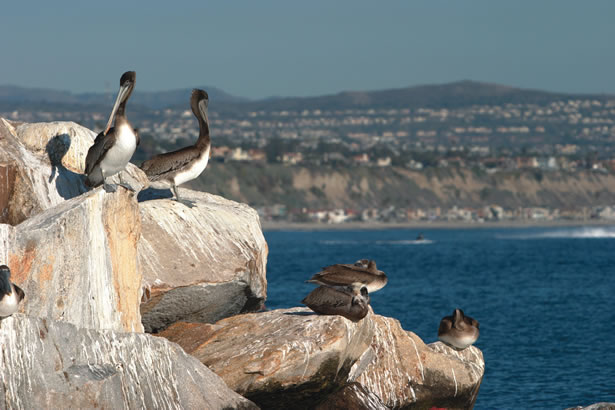 Getting to Know the Pelican

The brown pelican (Pelecanus occidentalis) is the smallest of the seven pelican species that exist worldwide. The only other pelican species that resides in the U.S. is the white pelican, which is not as common along our coast. The California brown pelican is a subspecies that resides from Mexico to central California, with the majority living around the Sea of Cortez. Other subspecies of brown pelican also live along the East Coast and along the Gulf Coast. In the Gulf, brown pelicans were particularly impacted by the Gulf oil spill, as their territory had been threatened like never before. Brown pelicans are easy to identify due to their size, white and grey coloring and their distinctive long beaks and pouch.

Pelicans are primarily pescatarians, and their energetic habits require up to four pounds of fish a day to maintain their health. The California brown pelican primarily eats anchovies and sardines that school at the surface and is the only species of pelican that plunges into the surface to catch its food. Anyone who’s seen this wild headfirst dive into the water firsthand can appreciate this uniquely violent hunting approach. Pelicans have extremely keen eyesight and can often be seen scanning the surface of the ocean looking for the reflections of the silvery scales of the schooling fish, before diving into the water and scooping them up in their huge expandable pouches under their lower beaks. Pelicans can dive from heights of up to 70 feet and have air sacs beneath their skin to cushion the impact and help them resurface.

Pelicans are social, gregarious birds, and males, females and juveniles often congregate together in large flocks, thus the distinctive formations of pelicans often seen flying along Laguna’s coast. Like cyclists in the Tour de France, pelicans fly in V-formation to draft off the leaders and make gliding more efficient. Also like cyclists, the lead bird will eventually drop back and rest while another pelican takes a turn breaking the wind.

According to Jay Holcomb, now director emeritus of International Bird Rescue after running the organization for 25 years, there are two primary drivers of pelican travel: food and breeding.

The recent La Niña conditions, which generate colder water in combination with spring winds, create more opportunities for upwelling, a process that supplies surface waters with more natural nutrients. Those nutrients allow plankton to thrive, which in turn attracts anchovies and sardines, which typically school in large groups off Laguna’s coastline in the spring. Pelicans are at the top of this food chain, which may best explain why pelicans have been so prominent locally in recent times.

Because pelicans rely on fish being plentiful and close to the surface, El Niño conditions don’t bode as well for them. During these warm water events, the cooler, nutrient-rich waters can’t reach the surface, and the fish tend to stay deeper, thus reducing food availability to the pelicans.

Most California brown pelicans lay their eggs in rookeries at the Channel Islands and the Coronado Islands off of Baja California. The birds nest in large colonies in bushes, in treetops and on the ground, which is part of the reason they breed in areas that are uninhabited by people. Female pelicans typically lay two to three eggs that take a month to hatch, and the parents share the responsibility of incubating the eggs and raising the young, which are completely dependent on their parents until they can start flying at around 75 days.

To the Brink and Back

Pelicans incubate their eggs with their feet, instead of the more typical use of the breast feathers used by other species of birds. Incubating with their feet made pelicans particularly vulnerable to the effects of the pesticide DDT. In the late 1950s, DDT was a common pesticide that entered the food chain, bioaccumulated (an additive effect of increasing concentration with each level of the food chain) in the pelicans and resulted in thin eggshells that would break during incubation. This devastated the pelican population and almost resulted in the complete extinction of the brown pelican. As a result, the California brown pelican was listed as an endangered species both at the federal level and by the State of California in 1970.

Subsequently, the EPA banned DDT in 1972, and bird populations threatened by the chemical have recovered robustly ever since. Like the bald eagle, brown pelicans are an amazing success story of the Endangered Species Act. As a result of their listing and the subsequent ban on DDT, their populations have recovered to the point that the California brown pelican was removed from the endangered species list in 2009. It is now estimated that there are over 11,000 breeding pairs off the California coast and many more down in Mexico.

Jay Holcomb explains that all the pelicans we are seeing may be “the new normal” now that the populations have fully recovered. So when their favorite fish are schooling off Laguna’s coast, this is the number of pelicans that can be expected, and that locals should be happy to see. LBM 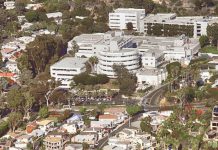