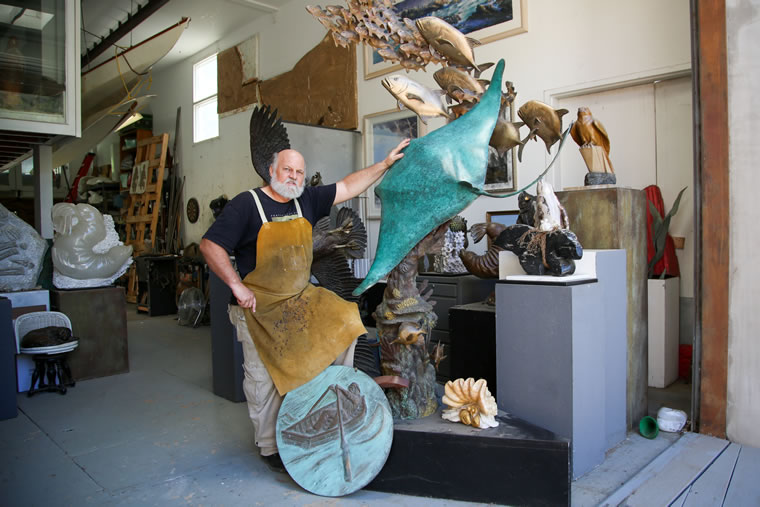 In Crescent Bay Point Park, a playful sea lion and two cormorants keep watch at an ocean overlook. The metal sculptures—Laguna Locals—are part of a legacy of public art left by longtime resident Terry Thornsley, who died in May at age 57. In his work, which often featured marine mammals and other sea life, a piece of Terry will endure for generations to enjoy.

The talented artist was known for his dedication to detail, spending countless hours researching the animals he would depict. “He painstakingly worked on each hair follicle and nail of the sea lion to each feather of the birds,” says Siân Poeschl, the city’s cultural arts manager. “… Terry was meticulous in his work. His blue eyes would sparkle when he started explaining his process. … His knowledge of his chosen material of bronze was masterful.”

That same focus was applied to his most recent public piece, Grace, a relief sculpture of stainless steel, copper and bronze installed in spring 2014 at the lifeguard headquarters at Main Beach. Two figures row a dory through metal waves—colored with green and blue patina—to make a rescue.

“It’s a thank you for the opportunity to the city and a gift to the community I live in,” he said in an interview with the Laguna Beach Independent (a sister publication of Laguna Beach Magazine).

Earlier this year, the prolific sculptor was recognized for his contributions to the local landscape: At the Art Star Awards, presented by Laguna Beach Alliance for the Arts, he was nominated for Artist of the Year. Many continue to admire his work on a daily basis, from locals and tourists to city leaders.

“Terry’s amazing art was a gift to our community,” says Pat Kollenda, a Laguna arts commissioner. “He was truly talented and created spectacular sculptures that reflected our beautiful environment. He will be missed.”

Terry was born in Lakehurst, N.J., and grew up in a Navy family, traveling extensively as a child. This provided plenty of inspiration for the self-taught artist, whose career began at 14 with his first art show in Coronado, Calif.—his parents’ art collection spurred him to give it a try. Terry exhibited his watercolors in Florida galleries while in high school, then started sculpting at age 21 and took foundry classes at Mt. San Jacinto College in the early 1980s after settling in Southern California.

Throughout his life, Terry continued putting brush to canvas both with watercolors and oils to capture seascapes, desert scenes and other rural settings. He also explored soot as a medium to create soft-edged, ethereal patterns. While he started as a painter, he became known for his sculptures that many have come to embrace as an intrinsic part of the community.

In addition to Laguna Locals and Grace, he created the bronze Kelpbed Delight in front of Physician Center West at Mission Hospital, and Peacescape, featuring a towering oak tree and life-size birds taking flight at Montage Laguna Beach. And his endearing seal pup statue, Water Puppy, welcomes visitors to Festival of Arts, where he was a longtime exhibitor (he also had a booth at Sawdust Art Festival for several years). The seal statue resonates with young and old alike, becoming an indelible part of their festival memories.

Woodworker Randy Bader recalls one year the statue was moved while the courtyard was being reconfigured. “The first comment from my daughter, who was not a little girl anymore—she was probably 14 or 15—she goes, ‘Where’s my Water Puppy?’ … Because the first thing that would happen when she would walk in [was] she would pat that little Water Puppy on the head,” Randy says. 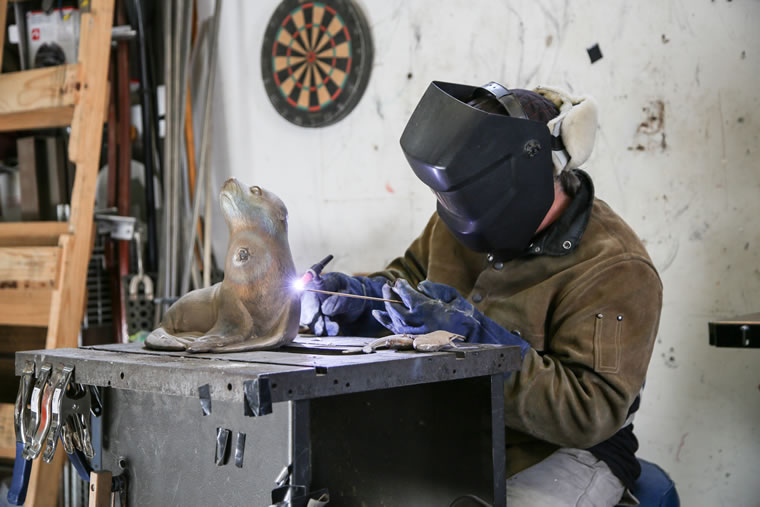 A Laguna resident for 31 years, Terry worked out of a studio downstairs from his canyon home for much of that time, keeping him in touch with the nature that so influenced his art. “I especially love the deer, owls, hawks,” he shared with Laguna Beach Magazine earlier this year. “It’s a beautiful place.”

Terry designed the building where he and Randy each had studios for 23 years. The two men met when they were both starting out at Festival of Arts and teamed up a decade later to have the side-by-side spaces constructed.

Randy admired the intensity that Terry brought to his pieces, from the research to make each detail perfect to the engineering required for installation. He would design special mounting brackets and fashion bolt covers with barnacles or other sea life to blend in with a sculpture. “He really worked hard to get everything right,” Randy says.

And Terry was generous in sharing techniques with other artists, whether or not the advice was sought, Randy says, adding that he would often wander over to someone’s studio if he knew they needed help.

When not working on his art, Terry was an avid fossil hunter, a pursuit that was prompted by a chance discovery in his backyard. He also enjoyed camping, kayaking and boating over the years, even serving as a crewman on a tall ship bound for Hawaii. Jeweler Don Beres accompanied him on many of those outings. “I knew Terry as a sailor and consummate fossil hound with amazingly sharp eyes,” Don says. “He would always find the giant shark tooth that I was blindly standing upon.”

Don and Terry met at Festival of Arts in the early 1980s and connected over a common interest in kayaking and the ocean. “I am a fisherman and Terry was a strict vegan, but we shared a fascination with the sea,” Don says. “… He often came aboard my fishing boat to video the whales offshore. He took his observations back to his studio and produced his very public art.

“I really miss him,” Don continues. “It’s been a real shock to his close friends.”

Terry, who died of natural causes due to cardiovascular disease, is survived by two sisters, two brothers, two sisters-in-law and numerous nieces and nephews. And, of course, he leaves behind several treasured art pieces around town. Says Siân: “Laguna Beach is a better place for the lasting legacy he left us through his art.”