More than just a means to an end, having your beverage of choice in the right glass makes all the difference in the world. -By Rich Manning | Photos by Jody Tiongco 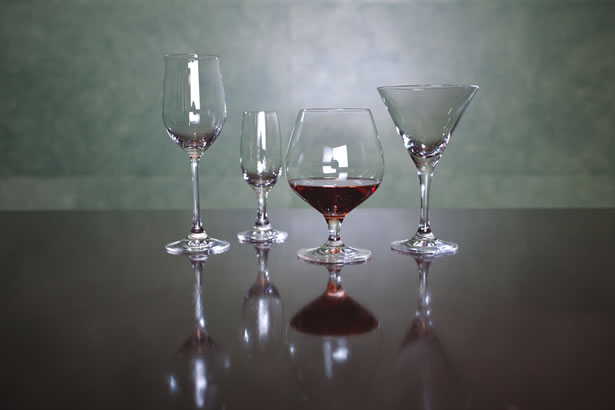 Skilled bartenders and sommeliers know that picking a glass is not an exact science, but that things simply do taste better when served in the correct vessel. (For those skeptics, try drinking your favorite liquor or spirit in a glass clearly not designed for it; then try it in the correct glass.)

Even as various shapes work for distinct beverages, paying attention to the variables from person to person is also important. “Different glassware works for different people,” says Daniel Grajewski, sommelier at Stonehill Tavern at The St. Regis Monarch Beach. “No one’s nose or mouth is in the same position, so a different type of glass might benefit a person a little differently.”

As dictated by what it’s holding, the shape and size of a wine glass can vary. Elements that may be easily taken for granted, such as how much of the wine is exposed to the elements and the way a rim is shaped, absolutely affect a wine’s sensory components.  “You want a glass to highlight a wine’s most important aspects like its flavor notes and aromatic properties,” says Troy Smith, beverage manager and sommelier for the Montage Laguna Beach. “For example, a wine glass with a rolled rim as opposed to a cut rim will interrupt the flow of wine, which lessens the tasting experience.” The type of glass will easily yield notable taste differences between a red wine and a white wine.

A glass with a larger surface area will enable a red to better mingle with air, which allows it to “open up” by releasing its concentrated flavors from the bottle. “A red wine really opens up best when it’s poured into a glass designed specifically for reds,” Troy says. “A glass with a smaller surface area can drastically change the way a red could taste.”

Conversely, since a white wine tastes best when chilled, a glass with a smaller opening decreases exposure, keeping it cool and maintaining its flavor. “[A white] doesn’t need as much surface area to open up because of the cool temperature, which is part of the appeal,” Daniel says.

The Champagne Flute
The elegant champagne flute is instantly recognizable. Its sleek appeal is due in large part to its slender shape, which allows it to retain maximum carbonation as it displays its bubbly contents. And while champagne’s aromatic properties might be enhanced if served in a normal white wine glass, doing so may rob it of its inherent charm. “Pouring a glass of champagne in something other than a tall flute means you aren’t going to have as many bubbles in your drink,” says Joseph Guillena, director of operations at Watermarc and 230 Forest. “This takes away some of the fun behind the drink.” 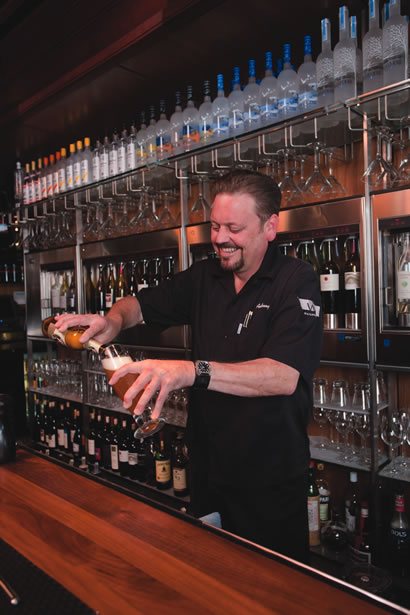 Sniffing the Cognac
There is a simple formula for selecting the proper cognac snifter: The higher the quality of cognac, the wider the base should be. Having a broader surface area within the glass generally calls for a narrower opening, which in turn allows the drink’s aromatic properties and flavors to be highlighted. “The higher the quality, the more aroma, the more flavor and the more you want to trap those scents in the glass as you drink,” says Daniel Grajewski.

While similar principles of concentration apply to other spirits such as scotch, brandy and rum, their enjoyment as a stand-alone beverage or a component in a cocktail is tied to aesthetic appeal more than any other libation. “Take a martini, for example,” Joseph explains. “Obviously, there is a lot of crafting that goes into making it, but at the end of the day, it needs to be served in a martini glass, or it isn’t a martini.”

“It’s a way of serving a beautiful drink chilled without serving too much of it,” Daniel adds. “The thin glass allows the purity of the spirit to show through without actually hindering it in any way. Plus, you get the cold feel from the glass.”

Frothing at a Frosty Glass
At first, it might be difficult to fathom beer benefitting from being poured into the right glass, but that is indeed the case. Much like other spirits, the key element to a beer glass is its ability to trap the tastes and smells of the brew at the top in order to complete the aromatic experience. “The traditional pilsner glass, with its smaller opening, works quite well for nosing delicate lagers,” says Andrew McCloud, bartender at Watermarc. “Though most of the time, you can just pour beer in a pint glass and be perfectly fine,” Andrew explains.

Getting the Full Experience
Much like selecting the right glass can enhance the consumption of a beverage, choosing the wrong glass can have dire consequences for the drink, either severely hampering or ruining the sensory elements that make it so enjoyable. “If a glass isn’t suited for the drink that’s inside it, the guest might miss out on an entire element of that drink,” Troy says. Next time you order a round of cocktails, a cold beer or a fine brandy as a digestif, stop and check out the glass that it comes in—the decision to put it in that specific glass was definitely not an arbitrary one. LBM 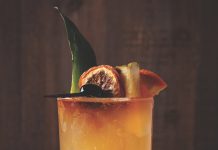