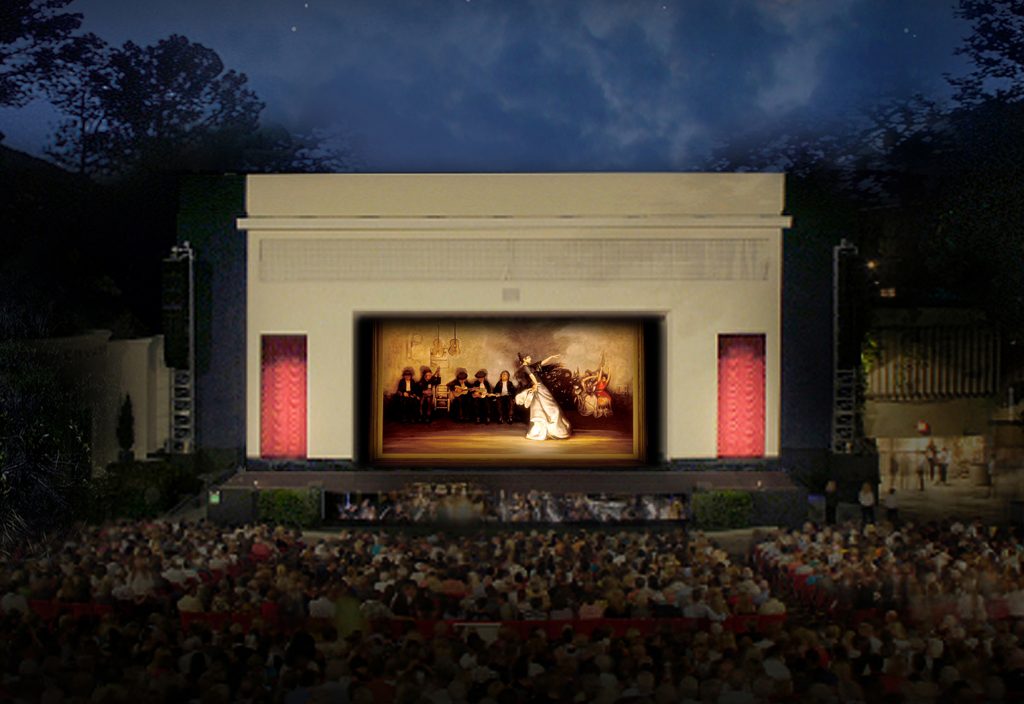 An insider’s look at one of the most beloved and awe-inspiring traditions in Laguna Beach reveals an intricate network of artists, writers and actors.

Each summer from July through August, hundreds of cars line the narrow lanes of Laguna Canyon Road, headed toward Laguna Beach’s pristine coastline. While the bumper-to-bumper traffic would drive most communities crazy, it’s all in a summer’s work for Laguna locals, and it comes with the territory of hosting one of the area’s most beloved traditions: the Pageant of the Masters.

A cornerstone of Laguna’s arts community since the first “living pictures show” in 1932, the Pageant of the Masters continues to astound viewers more than 80 years after its inception as one of the biggest draws of the city’s annual festival season. This is almost entirely due to the diligent efforts of volunteers and event staffers who work year-round to create intricate moving sets, one-of-a-kind costumes and compelling narration. Come curtain call, all of their efforts meld together to unite seemingly unrelated works of art under a common theme.

This year’s edition of the pageant, “The Art Detective,” runs July 9 through Aug. 30 and will deliver an atmosphere of intrigue and suspense, as audience members are led on a quest to uncover some of the greatest mysteries and events to ever rattle the art world. Inspired by this year’s theme, Diane Challis Davy, the pageant’s director, offers a look behind the curtain of the Irvine Bowl, providing a unique glimpse at the mysteries and magic that go into creating one of the world’s most acclaimed productions of tableaux vivants.

Before the curtain can rise on the first show of the season, members of the pageant family will have toiled away for nearly a year—sometimes longer—to create the sets, costumes and narration that form the backbone of the production. However, before any of that can take place—often even before the previous year’s performance has come to a close—Diane is hard at work, brainstorming and sifting through ideas to settle on a perfect pageant theme.

“The [‘Art Detective’] idea came up two or three years ago,” she shares of her inspiration. “I was inspired by a PBS show called the ‘History Detectives’ … so I had an idea for a concept for a show [that] involved a lot of storytelling and solving the mystery and showing connections between different events in history versus inventions and works of art.” 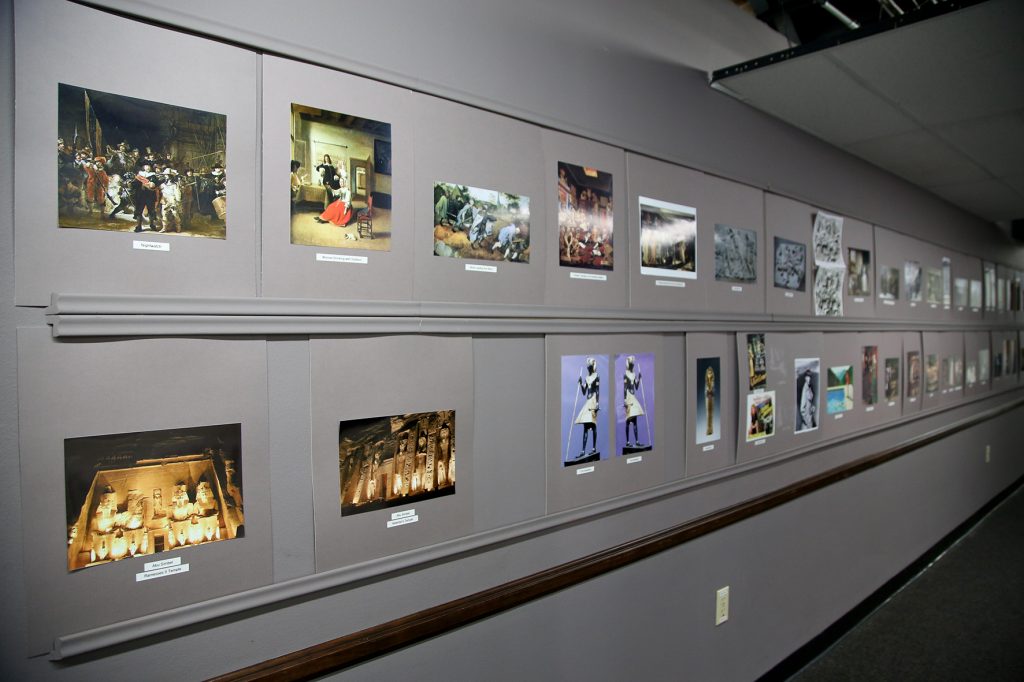 An exploration of the deeper connections between the pieces and contemporary issues also sets this year’s performance apart from past installments. The serendipitous timing of several recent events—including the discovery of a massive collection of priceless art in a man’s basement in Austria and the release of the new film “The Monuments Men”—have made this year’s theme even more relevant than Diane had originally anticipated. “There are so many great stories,” pageant scriptwriter Dan Duling says. “It’s a much more story-centric show.”

The idea of marrying the works under a cohesive theme in the first place also comes courtesy of Diane. In fact, for the majority of the pageant’s history, works weren’t necessarily arranged under thematic principals, but were instead presented individually—that is, until Diane assumed the director’s chair in 1980. “[Diane] really came up with the idea, since she’s been here, of the organized theme,” says Sharbie Higuchi, the pageant’s marketing and public relations director. The production has run with the structure ever since.

After the theme is set, it’s time for the real work to begin. Once Diane fleshes out her ideas a bit more, she shares her thoughts with a group of volunteer researchers who begin gathering images and other sources of inspiration, which they then present to each other at a show-and-tell-style party. “That happens back in September, and eventually I make selections of the artwork that we want to present,” Diane explains.

Though the approximately 40 images that Diane chooses are by no means a small selection, there are many more pieces that staffers are unable to include in the presentation due to time constraints. “This is a show, I can also say, where a lot of wonderful stuff ends up on the cutting room floor,” Dan laments. With each living picture onstage for between 60 and 90 seconds, the entire performance must be precisely edited down. The 90-minute program leaves just enough time for the selected works to be assembled and presented without a moment to spare.

Keeping this strict schedule in mind, Diane and Dan—who have each been with the pageant for more than 30 years—begin the collaborative process by discussing the more detailed aspects of the show. “Dan and I start kicking around our approach and [which] part of the story we’re going to tell,” Diane says. Though disagreements between the two creative minds are inevitable, any conflicts that arise are tackled in the best interest of the show. “A lot of times we will argue things out, but we’re always bouncing ideas off each other,” Diane adds.

By November, the team has finalized the lineup, which it presents at an annual committee meeting. Once the list of works is cleared with respective museums, the pageant’s artists begin the uphill battle of creating their own masterpieces.
Finalizing the stable of artwork is an exciting milestone for all members of the pageant team. Set construction finally begins, and the show begins to take shape under Diane’s watchful gaze. “[Diane] has a great eye for things,” says Richard Doyle, who will be narrating his fourth pageant this summer. “She puts this thing together right out of her own creative mind. She has a great eye for color and for movement.”

As images and costumes begin to take shape via sketching, sculpting and painting, the arrival of the formal casting call in January brings hundreds of volunteers to the Irvine Bowl. Packing into the Festival of Arts grounds—many in costume and full stage makeup—the colorful crowd presents a very perplexing scene, even to those who experience it every year, according to Sharbie.

In the midst of the casting hoopla, Dan is busy writing the narration, a labor of love that requires an intense fascination with art history and a talent for appealing to the masses, both of which he possesses. It’s his responsibility—as it has been for years—to familiarize himself with the chosen works, gathering as much information as possible and then condensing and translating it for the audience in a compelling and thematically relevant way.

“I’m kind of, on one level, the art detective of the pageant,” he quips, noting the hours upon hours of research he conducts in order to learn the works of art from front to back.

Dan’s passion for his work is evident to anyone who meets him or experiences his writing. Though the pageant is limited in some ways by the structure of the show, Dan is always able to find something new to keep him occupied. “That’s why I get excited about every year’s theme and every year’s show—because it’s going to be a new adventure,” he says. “It’s going to be a new way of looking at, in some cases, art I thought I knew and, in many cases, art I was not aware of.” 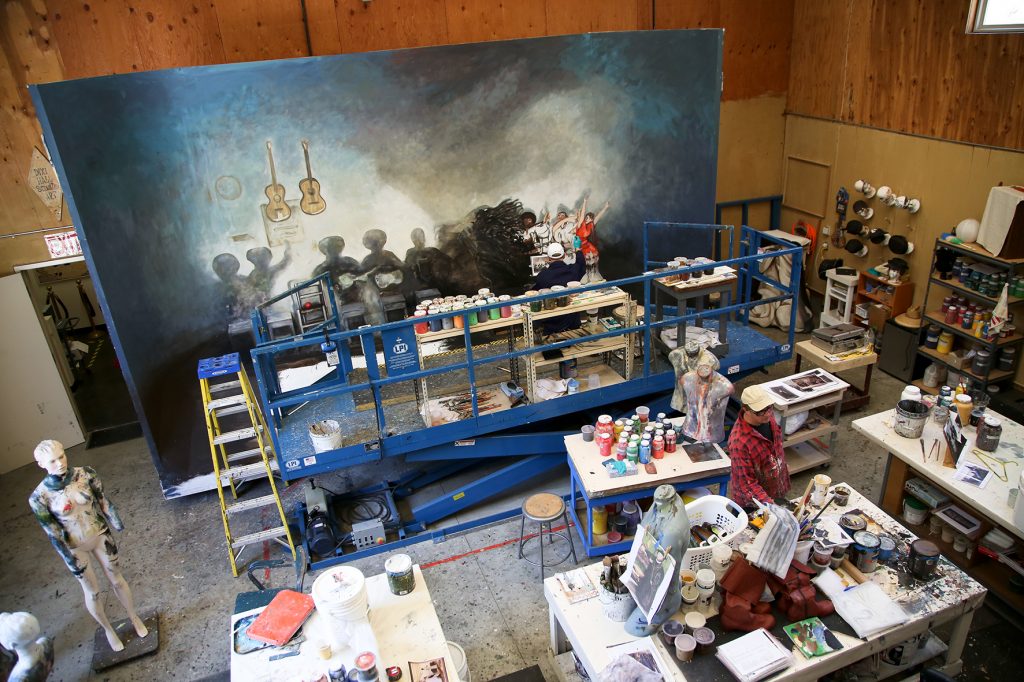 The end result of Dan’s work is a fascinating and story-driven account of each image, presented in such a way that younger viewers and those with no prior knowledge of the genre can still enjoy the show.

“To me it was important, when I became the scriptwriter of the pageant, to approach art in ways that I think are more universal,” he notes. “This is for everybody in the family. At the same time, it is also very sophisticated, so that people who know and appreciate art like to come to the pageant because … I don’t write down to anybody.”

As Dan finishes up his writing, Richard begins to study, preparing to bring Dan’s words to life in front of more than 2,500 people nightly for 60 consecutive evenings.

A legendary actor celebrating his 50th season at South Coast Repertory, Richard admits that accepting the position of pageant narrator was a slightly daunting venture; however, his enthusiasm for the show is just as palpable as Diane and Dan’s.

Richard’s decades of experience as a stage, film and voiceover actor allow him to bring both Diane’s theme and Dan’s writing to life. “He brings such a wonderful naturalness to the delivery,” Dan says of Richard. “He’s such a pro that he makes my narration seem to flow and be even more insightful.” 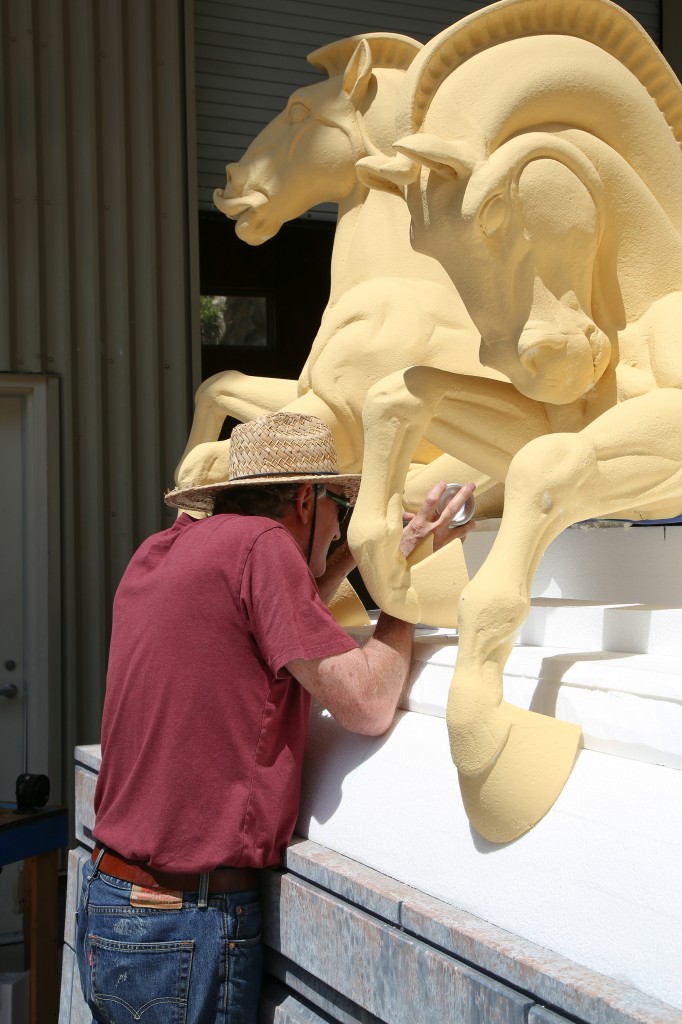 For audience members, Richard serves as a guide throughout the pageant’s progression. As each piece is presented onstage, Richard explains the deeper meaning behind the work. “I think that one of the wonderful things about the pageant is that the narration tends to … put the things you’re seeing into some context,” Richard says. “It’s like having a little docent next to you helping you understand the art that you’re looking at.”

Through the expertly crafted narration, the stunning sets and the live orchestra, which performs an entirely original score each year, visitors to the pageant are truly immersed in the world that Diane, Dan, Richard and the rest of the incredibly talented pageant family have created for them. This year, attendees can expect to lose themselves in the mystery of “The Art Detective” and perhaps gain a deeper understanding of the works’ underlying meanings.

“I think people coming to the show will be pleasantly surprised that it’s not just about art heists or the mystery of who stole this painting,” Dan muses. “It’s really about why we value art and why it’s important to us.”