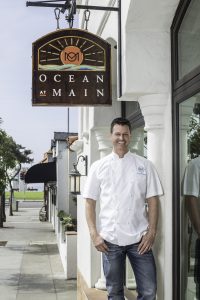 Step into Ocean at Main and it’s clear that Craig Strong’s new restaurant is a reflection of California’s coast. At once relaxed and elegant, the decor blends sea blues and greens with light wood tones while potted succulents adorn each table. A three-panel art piece above the open kitchen shows an underwater scene and, amid the colorful coral, sea grass and anemones, the artist has added a special touch: delicate flowers often used by Strong to top his impressive dishes. Large, wrought-iron chandeliers and wood beam ceilings punctuate the softer, beachy feel.

The space, formerly home to Taverna Pizzeria and Risotteria, was reimagined by Laurie Alter of Tuvalu Home Environment store in Laguna, but a patio with fountain and original mural by artist Boris Buzan remain in place. A secret alley cafe has been set up in the back for employees and special guests to eat. The 1940s Spanish mission-style building with red tile roof and large arching windows—once occupied by Laguna Federal Savings and Loan—was designed by Aubrey St. Clair, the architect behind other iconic local structures like City Hall.

Just a block from Main Beach and the city’s historic lifeguard tower, this charming building on Ocean Avenue seems a perfect fit for Strong, himself a culinary icon in town. Strong served as executive chef for nine years at Studio, the Forbes Five-Star French restaurant at Montage Laguna Beach, before stepping down from his position at the resort this past summer and pursuing his own venture. Ocean at Main debuted the first week of October.

“Opening my own restaurant has been a lifelong career dream and I’m excited to have this opportunity in Laguna Beach, where I’ve lived for almost 10 years,” says Strong, whose affable personality and humility belie his remarkable resume, which includes accolades such as twice being named a James Beard Award semifinalist for Best Chef: Pacific.

Strong grew up in San Diego and began working his magic in the kitchen at a young age, often using fresh produce from the family garden—something he would later do Montage with the on-property garden. He attended culinary school at age 19, attending the now-closed L’Academie de Cuisine near Washington, D.C., and has worked at The Ritz-Carlton, Buckhead in Atlanta, The Newport Room at the Hotel Arts in Barcelona, Spain, and The Dining Room at The Langham Huntington hotel in Pasadena.

While Strong thought about starting his own restaurant while still in culinary school, he says, “I knew enough then I had a lot to learn. Working with luxury hotel companies throughout my career helped prepare me for today.”

This depth of experience can be seen in the global influences that he brings to coastal California cuisine, and tasted in the perfectly melded flavors. In fact, some of his favorite dishes on the menu transport him to the distant places where he has worked around the world.

“I love the Morro Bay cod with crispy calamari, potatoes and chorizo in an olive oil sauce,” the chef says. “It’s a fun dish that reminds me of my time in Barcelona. I also love the seared Pacific swordfish as it has a nice touch of spice. The ahi tuna tartare tartine on our lunch menu should be a big hit,” he adds. “We use rustic bread from local artisan bakery with an avocado relish, fresh radish and organic greens—this is the quintessential SoCal dish.”

The delightful tartine indeed stands out with a generous helping of spicy tuna atop the creamy avocado relish, which incorporates slightly tangy yuzu juice, served on a piece of bread grilled with a touch of garlic. However, diners would be remiss to skip the starters including chilled kusshi oysters topped with frozen blush wine and green apple granite, bringing together a sweetness with the oysters’ salty brine.

Squash blossom tempura and charred Spanish octopus are other delights to enjoy while sipping craft cocktails like the sweet and spicy Lover’s Beach Retreat with jalapeno-infused tequila, passion fruit, agave and lime, a visually stunning drink as the red passion fruit juice seems to rain through the liquid, which is garnished with a beautiful slice of blood orange. The 126-seat restaurant also includes an inventory of more than 50 bottles of wine from California and other countries.

As for entrees, one can’t-miss dish is the lobster fettuccine, featuring soft and buttery house-made noodles and succulent chunks of lobster, combined with bisque sauce and truffle butter then sprinkled with colorful flowers to complete the presentation.

“My travels around the world and cooking at home have been my inspiration for the menus,” Strong says. “I wanted to create more approachable dishes and continue to use the freshest, local products I’ve always used. My wife and I entertain often at home and I feel the restaurant is an extension of how we cook and entertain.”

There’s plenty of seafood on the lineup, indicative of a beach town, but also chicken, pork and beef dishes, salads, and lunchtime sandwiches like the grilled pork belly “PLT” with blistered shishito peppers, plus crispy flatbread pizzas baked in the built-in oven that Taverna installed. A tantalizing option is the pizza topped with house-made turkey sausage bolognese, cheese, broccoli and broccolini. The savory sauce will leave diners wanting more long after the last slice is gone.

The restaurant’s service is top-notch, too: Friendly and knowledgeable waiters are ready with recommendations and a story behind each offering, whether that be the local ingredients or the origin of Craig’s Spice Cake, which the chef created as a take-home gift while at Studio, a requirement for attaining the Forbes Five-Star designation. The cake has different accoutrements at Ocean at Main, but the same rich flavor that loyal diners will recall. Strong has also created a take-home gift for his guests here—a bag of three scrumptious cookies, including a snickerdoodle, dark chocolate with sea salt and a brown sugar variety. 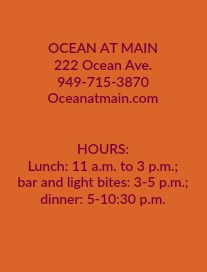 For those who don’t want to wait for a sweet treat until they get home—or to the car before ripping into the cookie bag—desserts range from the spice cake to a vegan whipped coconut custard with blackberry compote, a warm apple crisp and a chocolate torte. Whether indulging in decadent dessert or savoring an inspired piece of pizza, every course illustrates Strong’s artistry in the kitchen—his own kitchen, finally, in the town he has called home for nearly a decade.

“I love the sense of community Laguna Beach offers,” he says. “My wife and I fell in love with the community when we first moved here almost 10 years ago. We love Laguna’s artistic roots, diversity, gorgeous scenery, relaxed vibe and the people that make up Laguna Beach. With my wife being an artist and an actress and my life in the culinary arts, we feel this is a great place to express ourselves.

“… When this opportunity presented itself, I knew I had to make it happen,” Strong says. “I’m not getting any younger. The space felt like a fit for what I had envisioned. And, I get to remain working and living in Laguna Beach. It was meant to be.”