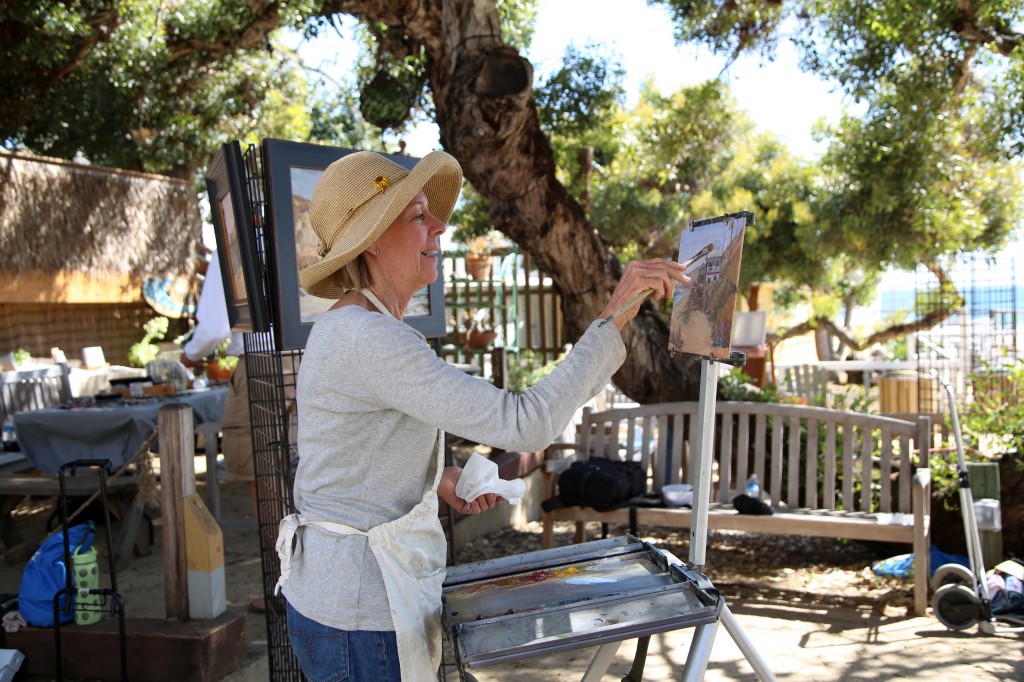 Crystal Cove continues to inspire artists to preserve its beautiful coastline nearly a century after plein-air painters first brushed oil onto canvases by its stunning shores.

As one looks out over the charming cottages that dot the shoreline of Crystal Cove’s historic district, it is easy to see how the beauty of the sandy beaches and turquoise waves have attracted so many visitors to its pristine shores. From vacationers to movie stars, interest in the sleepy cove has failed to cease since it became the favorite subject of plein-air artists who settled in Laguna Beach in the late 1800s.

Since that time, the beaches, canyons and coves that make up what is now Crystal Cove State Park have delighted and inspired generations of artists to flock to the locale, toting their medium of choice. For some, the traditional brush and canvas is preferred, for others a camera or a pen and paper.

No matter which method they choose to channel their creativity, artists have long been, and continue to be, a driving force in the push for conservation of the park. “I loved it from the very first moment that I laid eyes on it,” plein-air painter Margaret Jamison says. “The first time I visited the cove to paint, I was awestruck by this amazing place.”

Through the eyes of artists like Margaret, the true splendor of Crystal Cove can be recorded and shared with others across the globe, in hopes of inspiring those who see their work to look for the conservationists within themselves.

The first impressionist painters to arrive in Laguna Beach in the early 1880s were immediately taken with the beauty of the Southern California coast. Settling into a cozy community of like-minded individuals, the artists allowed themselves to be inspired by the breathtaking scenery that surrounded them, starting the tradition of Laguna Beach as an artists’ colony. The impressive cliffs, native flora and fauna and pristine beaches of a certain cove to the north were of particular interest to the painters of the time.

“The fact that so many artists loved the coast there around Crystal Cove is a testimony to how beautiful the place was,” says Jean Stern, executive director of The Irvine Museum. “They could have gone anywhere. They could have painted in other places. But the beautiful blue sea, the rocks, the white sand, the waves and that tremendous coastal light which makes everything intense and clear—that’s what attracted the artists.”

One of the earliest known examples of these Crystal Cove impressionist works, a 1912 oil painting by famed plein-air artist William Wendt, depicts a shoreline untouched by humans, void of the many cottages that would later crop up along the sand. It illustrates a little slice of paradise that has since been surrounded by development. “I think a lot of the artists that were painting 100 years ago saw this land as something that would change in the future,” Jean contends. “I think part of their goal was to record it and to put it down on canvas and preserve it that way.”

When Hollywood came calling—around the 1920s—the cove began to see slight changes. Palm trees were planted, thatched roof huts were erected and the once temporary tents for summer visitors turned into more permanent abodes. Such development around the area took off over the years, and though homes and businesses have invaded the space surrounding the cove, the beauty and integrity of the beach itself has been preserved thanks to efforts of Crystal Cove Alliance (CCA), the state park’s official nonprofit partner, and countless individuals—many of whom are artists.

The artists of today have not let their sentiments toward the cove wander far from those of their predecessors. Just ask Margaret, who has been a working artist in Laguna Beach for more than 20 years. “[I am] very influenced by The Irvine Museum’s collections and the work of the early California impressionist painters. And that, of course, leads a direct line to Crystal Cove,” she says. “It is my time to record and interpret what I see there. Just as it was for [early impressionist painters].”

Margaret’s sentiments are echoed by her peers. Thea Gavin, a poet and Concordia University, Irvine professor, finds herself inspired by not only Crystal Cove but also the various parcels of land across Orange County that have managed to remain wild and untouched by development. She hopes that her writing will encourage others to experience these places for themselves, and even encourage future artists.

“When other people see [an artist’s] work, they see the landscape through new eyes … then they feel a connection through that artist’s work and they feel a tug to go experience that landscape for themselves. That’s the goal,” she contends. “Once you experience the landscape of a place, you start to know it and you love it, and then you want to preserve it.”

Hoping to rouse artists’ creativity and educate the public through their work, CCA is offering selected artists the opportunity to stay overnight at the cove and experience its magic for themselves. Though they are unable to permanently reside in the small cottages at the cove as people did in the past, CCA is attempting to recreate the experience through its artist-in-residence program, which offers overnight lodging to artists in addition to a display of their work in the heart of the historic district.

This program is something that Thea, a future artist-in-residence, believes is extremely beneficial to the artistic process. “I think [it’s important to spend] the cycle of the sun, at least once and as many times as possible, to experience how the place changes and the light changes and the breeze changes, and to go back throughout the year to see how the seasons [change],” she muses. “… It’s the same place but it’s always different.”

The desire to document the beauty of the world—whether though photography, painting writing or even composing—is something that Margaret, a member of the Crystal Cove Alliance Art Council, believes is naturally ingrained in the minds of artists. Margaret notes that she and other local artists have worked to raise funds for numerous organizations including CCA, Newport Bay Conservancy, the Fullerton Arboretum and Mission San Juan Capistrano to protect the most beloved places in Orange County. “Art does a lot of things,” she says. “We raise money for … lots of wonderfully good events. Plenty of painters are very active in raising funds to help these agencies do their work. So, in essence, artists are conservationists; they are preservationists.”

One man combining the practicality of science with the wonder of art is Peter Bryant, a research professor at University of California, Irvine. As Peter studies the plankton that inhabit local waters—including Crystal Cove—he photographs the microscopic organisms as part of his research, resulting in stunning and unexpected images. As Peter says, “It generates interest and fascination, rather than the kind of emotional response that you get from more traditional art.”

Though the images may not generate as strong of an emotional response as Margaret’s paintings or Thea’s poetry, seeing the types of creatures that live and thrive in Crystal Cove’s waters is enough to make people stop and think about the importance of preservation. Aside from the plankton, Peter notes that the cove’s tide pools are teeming with sea stars, anemones, hermit crabs and other creatures that need a protected environment in which to thrive.

Educational docent-led programs offered at the cove are helping to inform visitors of the proper way to handle tide pool exploration. Additionally, various artist-led programs offer the opportunity to experience the cove as an artist and stretch one’s creativity. Thea’s recent “connect to nature” creative writing adventure took participants walking through the cove before encouraging the class to use what they saw, felt and heard to motivate their writing.

Taking the inspiration that Crystal Cove offers and using it to fuel conservation efforts is something that comes naturally to artists who have been touched by the beauty of the park. It is art—more than science and figures—that calls people to action, tugs at their heartstrings and inspires them. “It’s not just facts and data,” Thea says. “There are things out there that touch us very deeply.”

It is this kind of excitement and willingness to participate in the efforts to preserve the cove that prove how dedicated artists can be. Through their eyes, conservation is not seen as an option, it is a way of life that is fundamental to their very line of work. “[Crystal Cove] is our own little unique place in Orange County,” Margaret says. “And once you’re around it for a bit, then, of course, the conservationist in you comes out because now you realize what a precious jewel this is.”

Through the determination and work of CCA and the many artists who support its efforts, Crystal Cove continues to shine bright. And without a doubt, it will remain a haven and muse for artists for years to come.