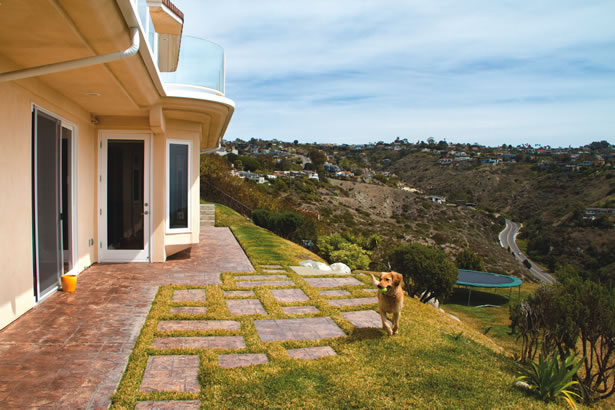 After the great fire of 1993, which ravaged the canyons of Laguna Beach and destroyed more than 400 homes, the neighborhood of Mystic Hills is enjoying the fruits of its recovery. –By Laura Gosselin | Illustration by Ken Harris | Photos by Jody Tiongco

Those who live in the Mystic Hills area of Laguna Beach, located in the hills just south of Laguna Canyon Road, enjoy impressive ocean and canyon views as well as the sought-after neighborhood vibe that’s often lost in the winding, rugged terrain typical of Laguna.

“It’s such a quiet and accessible area … quick to the beach, yet removed from the business of downtown. Approaching from upper Park Avenue, Mystic seems to be an island floating in the sky as you look out over the ocean,” Mystic Hills resident Stacey Smialowicz says.

However, life in Mystic Hills hasn’t been without adversity. Families who have lived in this area for more than the past two decades have endured insurmountable loss, when in October of 1993, a fire consumed 16,000 acres and obliterated many of the homes in the Mystic Hills neighborhood. Picking up the pieces after the fire, which was among the 10 most destructive fires in U.S. history, are the families who have rebuilt their lives from the ground up—as well as those who have moved into homes lovingly restored by former residents. 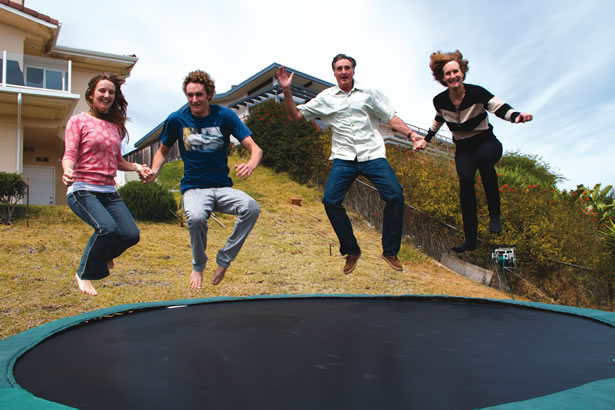 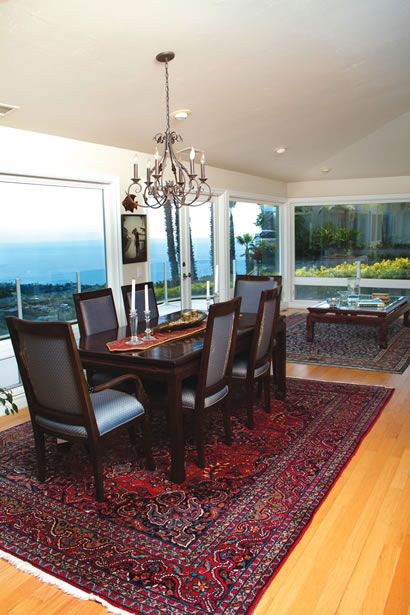 The Mattingley family has called their Mediterranean-style four-bedroom, three-bath residence home since they moved to Tahiti Drive in 1988. In 1993, the forces of nature tried to sabotage their American dream, but this tight-knit family found—as is common in many tragedies—that things seemed to work themselves out for the better. Rebuilding piece by piece, the Mattingley family realized they were able to redesign the home and add the outdoor living space of their dreams. The Mattingleys added a yard that has four levels, which Mark Mattingley says served as a fantastic battleground for their two boys and their friends when they were younger. Now, the family dog stays in shape by retrieving anything thrown to the bottom of the yard as she brings it back to the top.

“One of our greatest resources in Southern California is the weather and our ability to enjoy our outdoors,” Mark explains. “Yet we seem to be on a trend of reducing the size of our yards as we increase the size of our homes. The fire in ’93 gave us an opportunity to add a second story and create a larger, more useable level yard. The trampoline has provided hours of entertainment to family, friends and neighbors. And when I’m not feeling young enough at 57, I will spend a couple minutes jumping to regain my youth as well.”

Although the fire was a difficult time for the family, the Mattingleys became aware of the incredible sense of community that exists in Laguna Beach. Not only did Laguna Presbyterian Church orchestrate months of recovery efforts, but strangers and small business owners offered continued acts of kindness to help the struggling family when they could.Mark recalls, “In Northridge after the earthquake, there were stories of merchants raising prices and taking advantage of needy patrons. Here in Laguna, we had local merchants giving us discounts on everything. We had total strangers that saw my pregnant wife and two kids buying basic supplies after the fire, and they stepped up and would not let her pay because they just wanted to help.” Aside from their spirit, the one thing the fire was unable to destroy was the location of their home.

Chris explains, “The first time we viewed the house back in 1988, there were deer in the yard. There is so much wildlife to see on the perimeter of our yard. I will never stop being awestruck by the nature that surrounds us.” 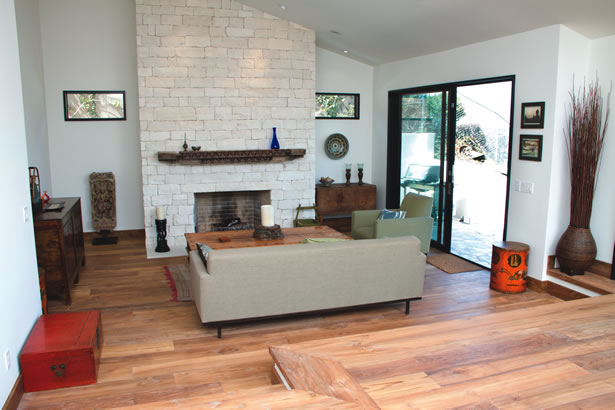 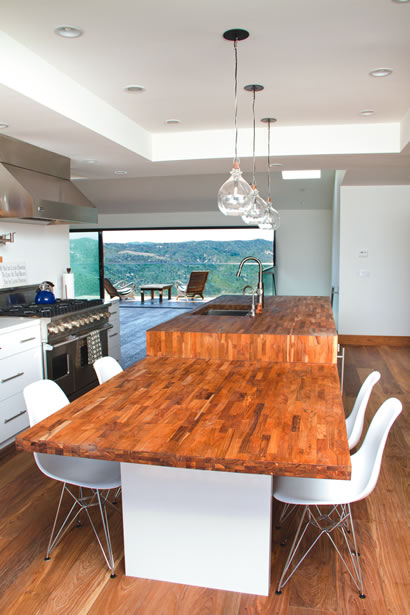 Long after the fires ravaged a home on Skyline Drive, Mark and Stacey Smialowicz moved into the home that had been rebuilt.  After purchasing the home, Mark and Stacey planned some fairly simple renovations to remove a few walls and open up the space; however, after excited discussions with Laguna-based architects and designers, the idea of moving the central staircase to maximize the space was born, which evolved into a domino-effect of renovations.

“We took the house down to the studs and actually removed the studs as well,” Stacey explains. “The primary goal was to open up the main floor to expose the amazing views, utilize the untapped downstairs area for the kids’ living space, and connect the pool and backyard area with the house.”

With a mish-mash of inspirations, Stacey and Mark tried to implement many natural stone and wood elements in the house into an open, free-flowing living area, drawing on their love of reclaimed materials and 10-plus years living in the unique spaces of New York City. Two distinct features of the house include reclaimed teak wood floors imported from Java, some having been used as floorboards for more than 250 years. Additionally, a focal point of the living room is a 150-year-old house beam from Sulawesi (an island in Indonesia), which is utilized as a fireplace mantle inset in a white Texas limestone.

The kitchen renovations were a particular challenge, as they didn’t want to go with the conventional upper/lower cabinets and island style. 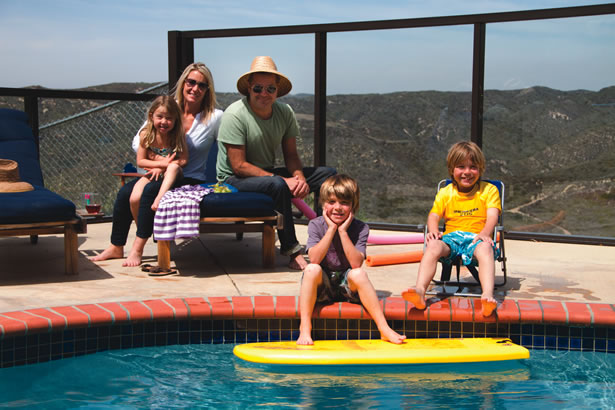 “Our designer, Lynn Pries, showed us an amazing European kitchen book, and we decided to have an extended countertop/island created in Indonesia out of teak boat hulls. We are also having a free-standing metal and glass cabinet fabricated to hold our dishes,” Stacey explains.

Perched atop a sloping hillside out back, the Smialowicz’ still have work to do with plans to add a pool along and build a bar and entertainment area at the bottom of the property. Of course, the ocean views are already in place.

The Old and the New 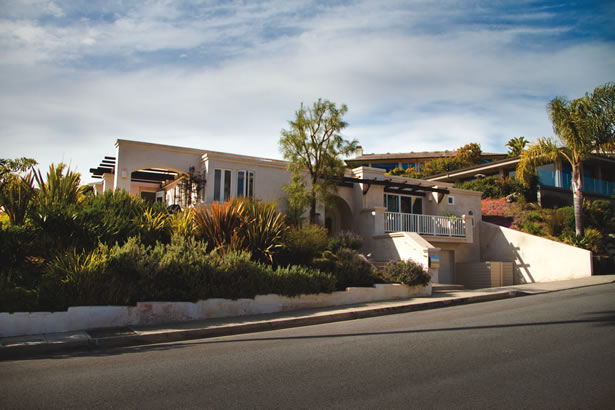 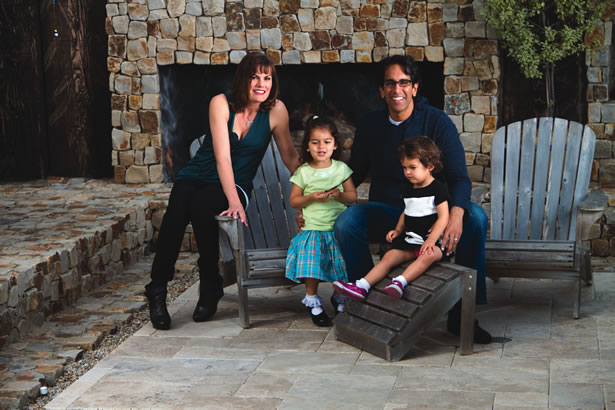 Five years after the 1993 fire, a new home was built by architect Morris Skendarian on an empty plot of land where a home had burned on Caribbean Way just behind Tahiti Drive. Ajay Lalvani purchased the home in 2001, and after he got married in 2005, his wife Andrea moved in. Built as an entertainer’s home, the living area feels spacious with high ceilings and prominent skylights that keep the house feeling light and bright even on rainy days.

As Andrea and Ajay began adding to their family, they also began adding to the house. Outdoors, the addition of the pool and spa also offers their children hours of delight. “In 2008, we added an outdoor space to accommodate a table and seating for 10,” Ajay explains. “I love to fill the table with friends and family and share food and wine into the night.”Inside, the redesign included adding traditional features to a modern home. The polished, concrete floors are juxtaposed against a front door and interior window salvaged from a 100-year-old church.

Mostly, they have found that not only are the concrete floors aesthetically pleasing to their design taste, but are also ideal for their children, perfect for riding various scooters, tricycles or whatever means of toddler transportation. Other kid-friendly renovations included converting the former library into a full-blown kids’ room—a room where all the toys are in one place.

“Our home is a combination of old meets new, with a modern contemporary design,” Andrea says. “My home is where I enjoy my family. I love that the open design allows me to see where my girls are. I love that there are so many glass doors and windows, so the outside and inside spaces blend.”

The Lalvani family wouldn’t want to be anywhere else other than in Mystic Hills.

“The most wonderful memories we have about our home would have to be bringing each of our daughters home from the hospital as newborns,” Andrea says. “Family and our neighbors greeted us inside our home as we walked in carrying our new little family members.” LBM 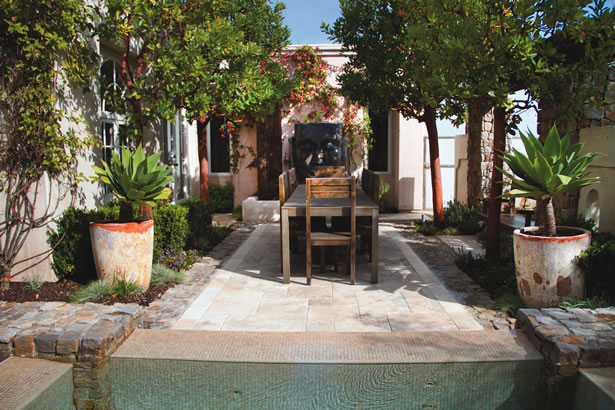 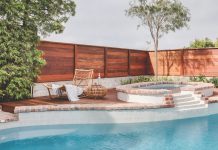 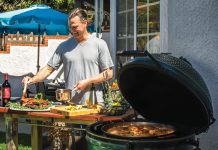 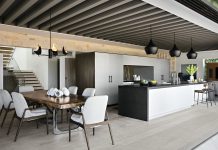