Tonight, Laguna’s own Amar Santana will make his television debut on the premiere of Bravo’s 13th season of “Top Chef,” a reality competition that pits talented chefs against each other in a variety of culinary challenges. Judged by experts including acclaimed chef Tom Colicchio and food writer Gail Simmons, the show will take this season’s competitors to various cities across California—Amar joins 16 other “cheftestants” in the quest for the title.

The chef-owner of Glenneyre Street hot spot Broadway by Amar Santana has been tempting local palates with elevated American fare since 2012, boasting bold yet refined dishes alongside one of Laguna’s most highly regarded wine programs. Should you be inclined to stop by during tonight’s premiere—or any time throughout the season—we spoke with sommelier Michael McConnell about the restaurant’s best bets for food and wine pairings that highlight the ingenuity of the chef behind the cuisine.

Amar’s signature dish featuring a whole sea bass is served with pickled clamshell mushrooms and truffle jus that speak directly to the earthiness of this barolo from Piedmont, Italy. The wine’s medium body and bit of minerality “stimulate the dish,” Michael explains, as the vintage made from Nebbiolo grapes blurs the line between contemporary and traditional. “It’s so much about what Amar’s about,” Michael says of the rustic entree that has been on the menu since the restaurant opened. “It’s sexy, it’s bold; it’s got all the components of the man himself. He likes to make sexy dishes.”

Mouthwatering acidity and citrus notes in this varietal from Languedoc, France “tie in nicely with the acidity and herbs” of Amar’s Asian appetizer. Featuring avocado sorbet, citrus sesame dressing, cilantro, pickled peppers and wasabi tobiko, the lightness of the dish complements the “clean, crisp and mellow” wine, Michael adds. “It’s a really pretty of a pairing.” He notes that though the vintage is currently unavailable at the restaurant, it will soon be restocked.

This Bordeaux blend from Napa has “solid blackberry [and] big, bold fruit” notes, Michael says—a perfect partner for the beef served with roasted fingerling potatoes, chimichurri and caramelized onion jus. You could also try the equally tempting 2005 Quilceda Creek cabernet sauvignon: Like many of the restaurant’s wines, the Columbia Valley, Wash., red is slightly aged and ready to drink. “I like the older vintage wines because the tannins lay down and don’t overpower the food,” Michael explains.

This late harvest sauvignon blanc from Marlborough, New Zealand is a lighter sip that’s perfect for Amar’s highly lauded dessert featuring bourbon-infused vanilla custard topped with strawberry sorbet, chocolate pearls and tarragon. “It has the fruit flavors and a little vanilla to it,” Michael says of the wine, which will also be restocked soon.

The honey flavors in this late harvest Napa Valley dessert wine pair nicely with the honey spread across the plate. Apricot and orange aromas emanating from the vintage elevate the lemon cream and candied lemon in the confection, offering the perfect end to your meal at Broadway by Amar Santana. 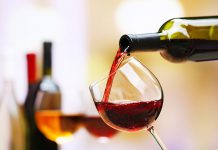 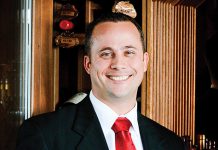 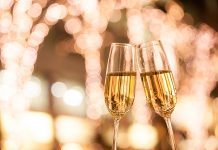