The magnificence of Laguna Beach inspires artists of all kinds: painters, novelists, filmmakers, poets and, in particular, architects. When it comes to designing a home, an architect creates more than a dwelling; he crafts a 3-D work of art that’s oftentimes an extension of the homeowner’s character. In many other cases, the architect or the resident chooses to design a home that captures the natural beauty of the property’s setting. Take, for instance, a local home whose two main pavilions highlight the exposed rock outcroppings that serve as the foundation for these structures. Another project in south Laguna showcases flat grass roofs bedecked with succulents that match the surrounding green hills, while a neighboring multilevel home features rusty roofs and red stucco walls—complementing the California pepper trees that populate Rim Rock Canyon. Here, we explore just a few of these examples of residential art whose elaborate designs are enhanced by the splendor of Laguna.

When designing his own home, Laguna Beach architect Kirk Saunders’ chief priority involved enhancing the rural tone of the “country lane”-type street on which the property is located. 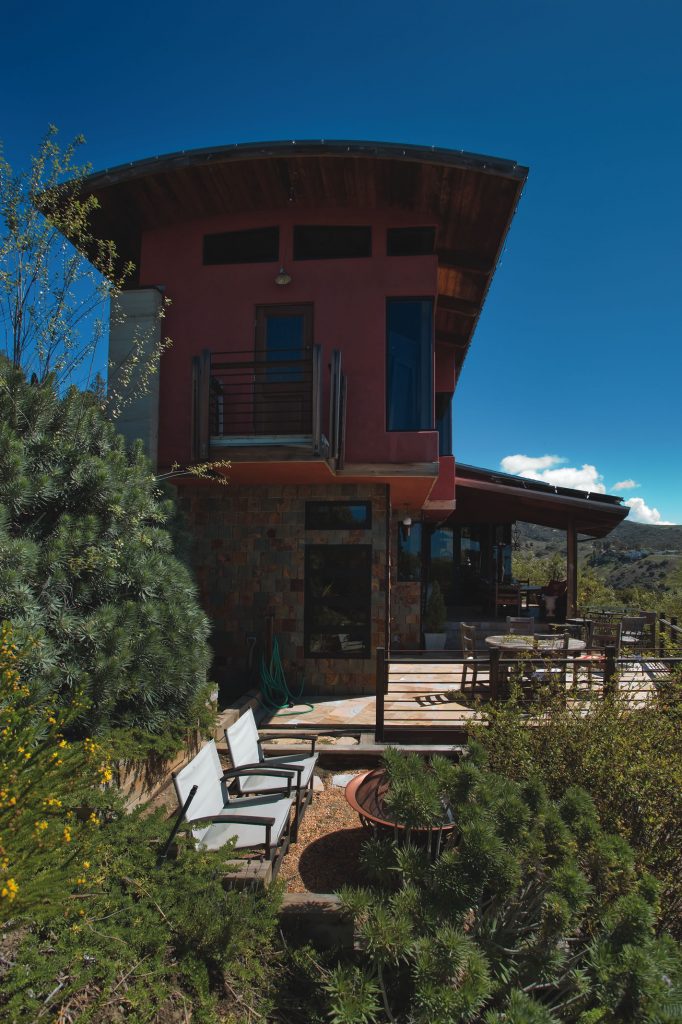 “A modern barn was the strongest image I had while formulating the look and feel of the home,” Kirk says. “The barn aesthetic carries through to the interior with high ceilings, heavy wood trusses, simple materials and an open plan.” 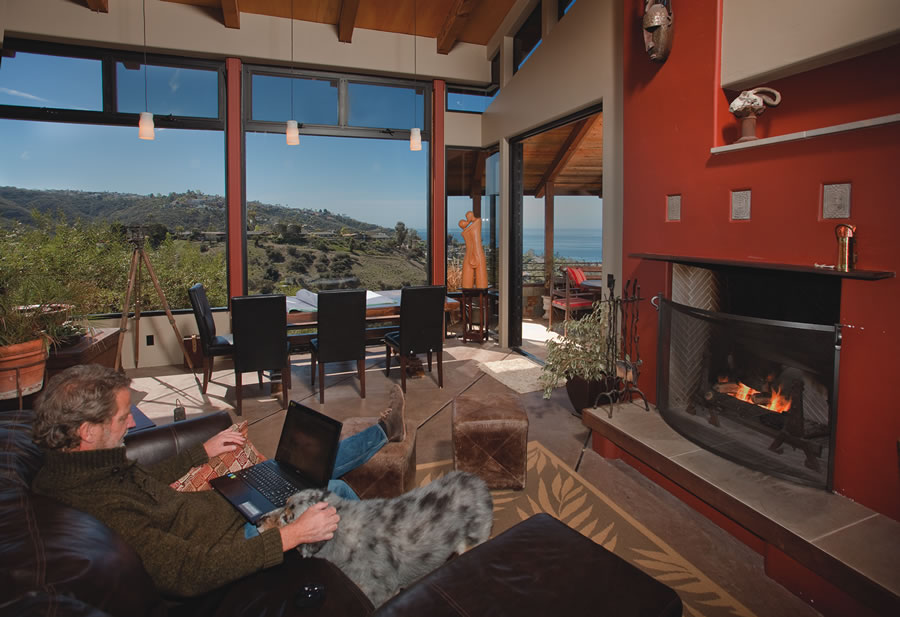 The unusual steepness of the property helped Kirk execute an open-plan design for a multistory home that’s not only composed of a main house and a guest unit, but also provides a 180-degree view of the ocean and Bluebird Canyon, thanks in large part to the expansive windows and multiple outdoor spaces for entertaining. 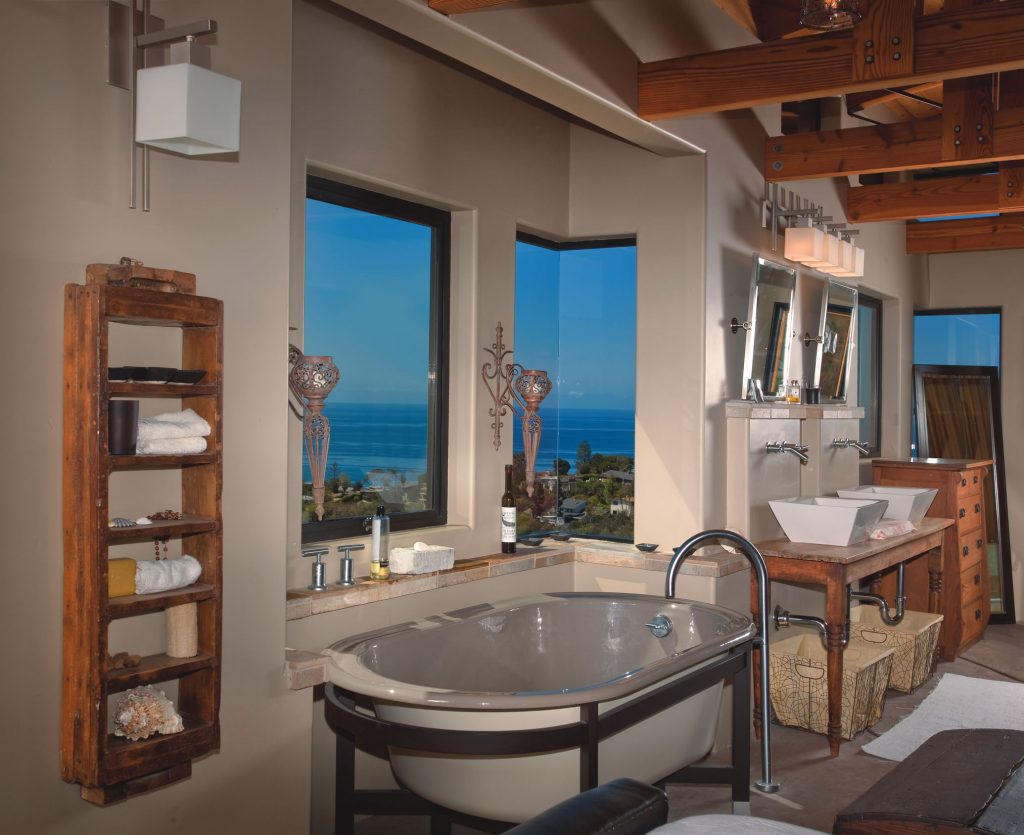 Kirk also used repurposed materials throughout the home: a bar top recycled from an old sofa that he and his father made 25 years ago, interior doors from an old bank, floors sourced from Costa Mesa’s now-defunt Kona Lanes bowling alley and cabinetry salvaged from the offices of his mentor, architect Chris Abel—each piece carrying a story. 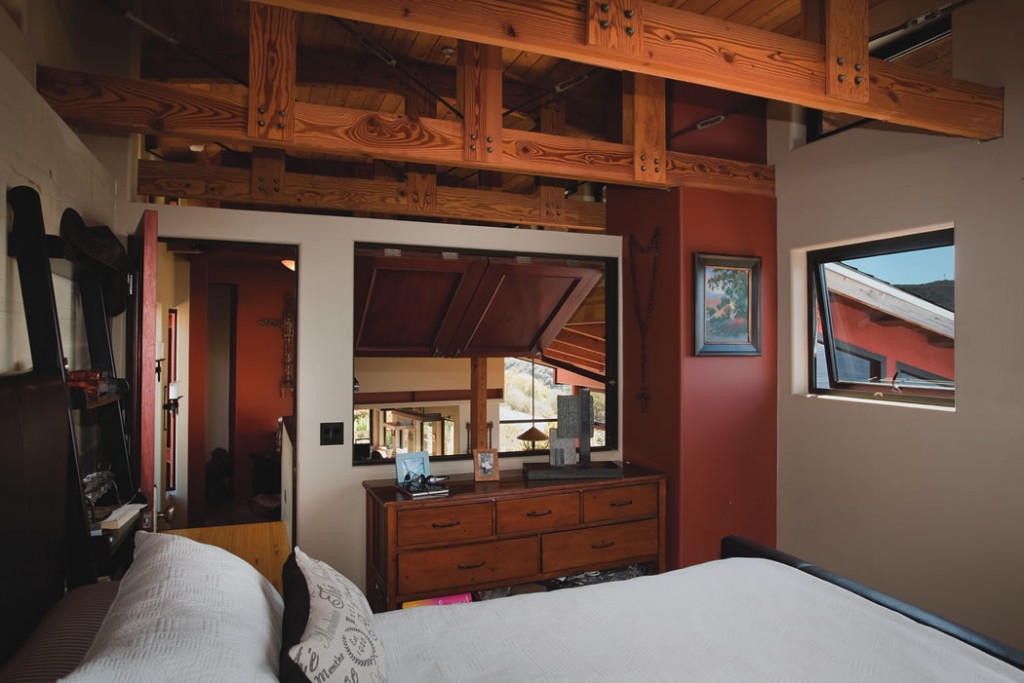 Step inside the contemporary property designed and owned by LA-based architect Paul Zajfen and constructed by Laguna Beach-based home builder Ken McMurray, and it becomes immediately apparent that an emphasis was placed on taking advantage of the property’s hillside location. Paul accomplished this by creating a home that “flows” from inside to outside, a task that involved not only building usable living spaces in an outdoor courtyard, but also adding stacked and double-glazed sliding glass doors in the living room and master bedroom suite.

“The transparent layers of interior and exterior space create an atmosphere [that] evokes a sensation of spatial generosity, visual stimulus and peace,” Paul says. “Quite simply, it feels wonderful to be in this house. It establishes a precedent in Laguna Beach for designing an appropriate, contextual and sustainable dwelling.” 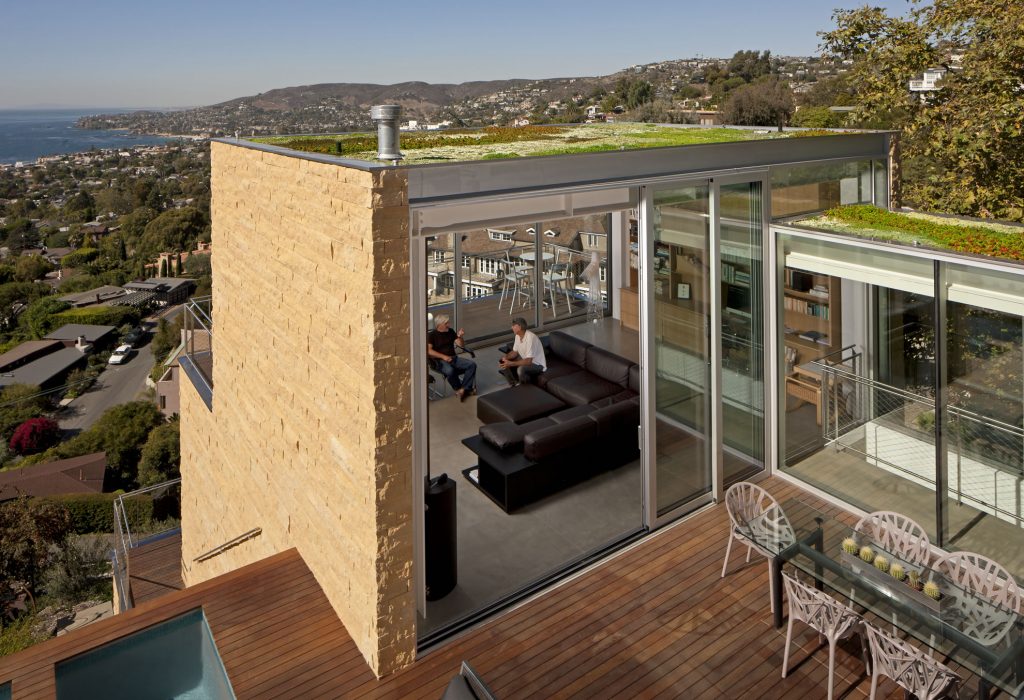 In the vein of sustainability, the home’s features include full-length glass walls that provide natural light and ventilation, thereby eliminating daytime use of electric lighting and air conditioning; motorized exterior sunshades controlled by sensors, which block 86 percent of solar radiation; concrete floors with a radiant heating system; and photovoltaic and solar hot water panels that dramatically reduce electricity usage. 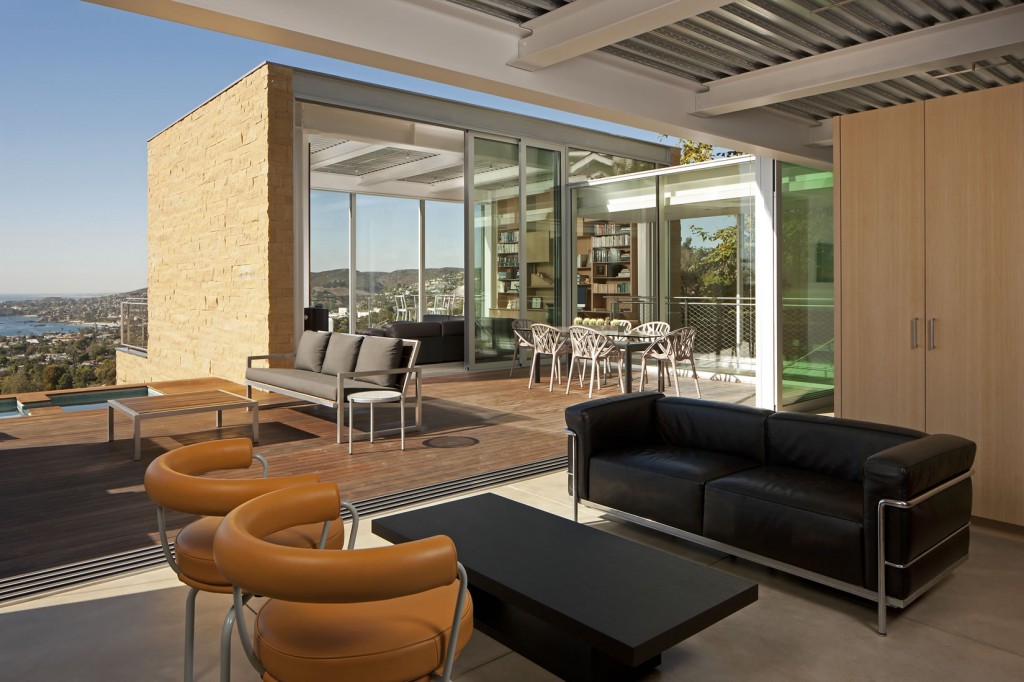 The floor plan is centered on a living room that’s separated from the kitchen and dining room area. A bridge connects both pavilions, crossing an outdoor courtyard that acts as a central space for the homeowner to see all parts of the house. The result is an understated escape that combines artistic aesthetics with an eco-friendly mentality. 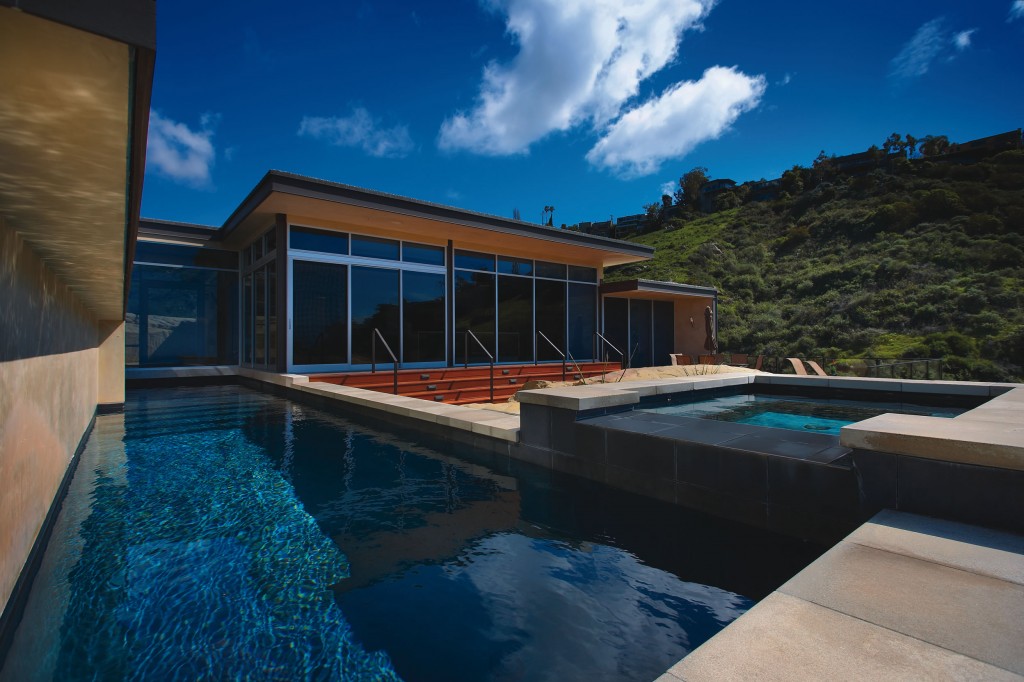 One of the main challenges that local architect Horst Noppenberger faced when creating this Laguna home involved trying to incorporate the site’s natural geology into the house’s design. But instead of matching the home to the surrounding property, Horst took a different approach. 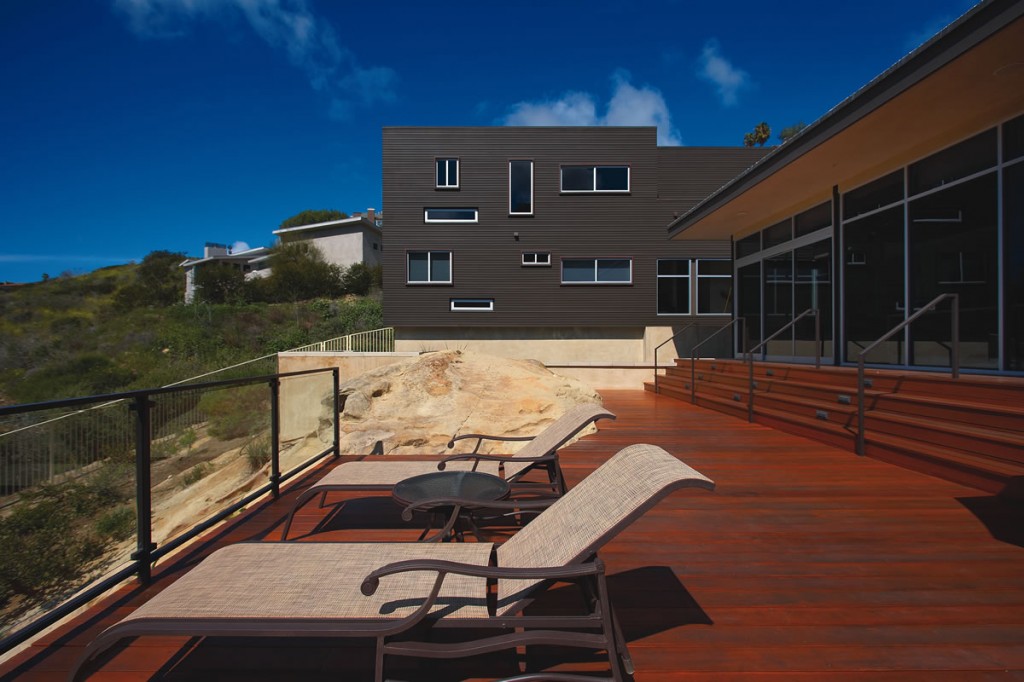 Horst and his team kept this concept of simplicity in mind as they divided the house into two square pavilions, creating what he describes as the image of two wooden crates that have fallen from an airplane; one rests horizontally and the other vertically on the property’s sprawling stone outcroppings, while the house’s glassed-in entry serves as a sort of umbilical cord between the two square structures. In between the pavilions is a slim, L-shaped pool that flanks the central courtyard and offers a pristine view of Catalina Island. 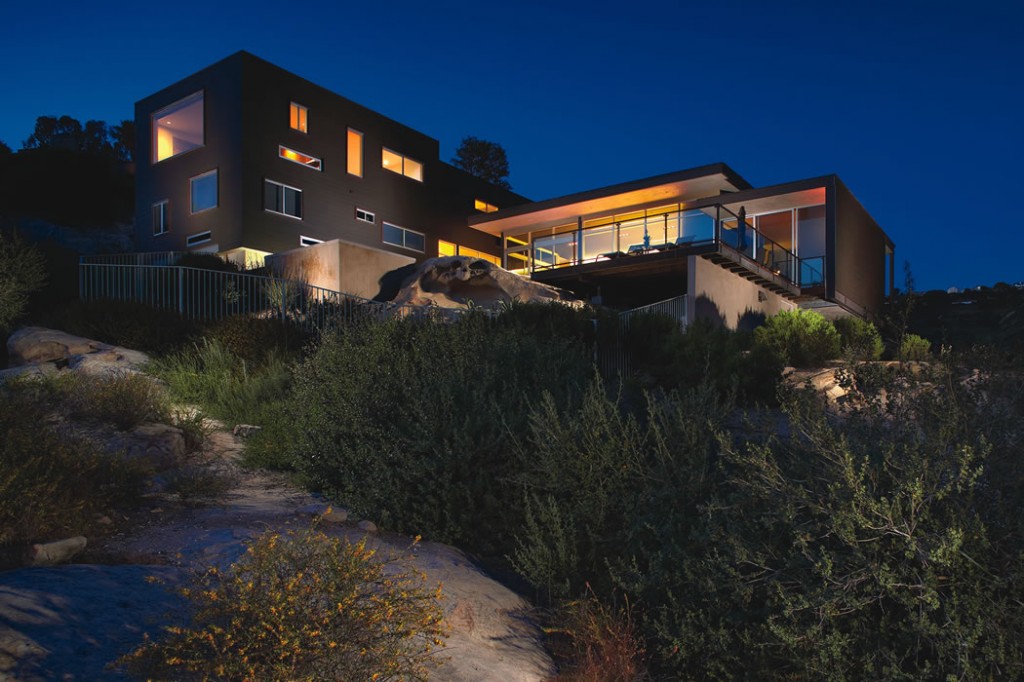 Horst says that the natural rock formations, stone  aesthetics and wooden construction of the home are perfect complements. “The hard, earthbound qualities of the exposed stone are enhanced by the soft textures of the wooden boxes,” he says.

“… The simple forms and materials will lead to a timeless and enduring expression of architecture.”

Inside a sun-bleached coastal community called Three Arch Bay, the home belonging to Laguna Beach architect James Conrad was built to incorporate stone, stucco and clay tiles in tones that match the San Onofre breccia rock indigenous to the area. Sixteen months of excavation and construction finally paid off, resulting in a stone hamlet that’s reminiscent of J.R.R. Tolkien’s Middle-earth and looks as though the dwelling sprouted from the knoll itself. 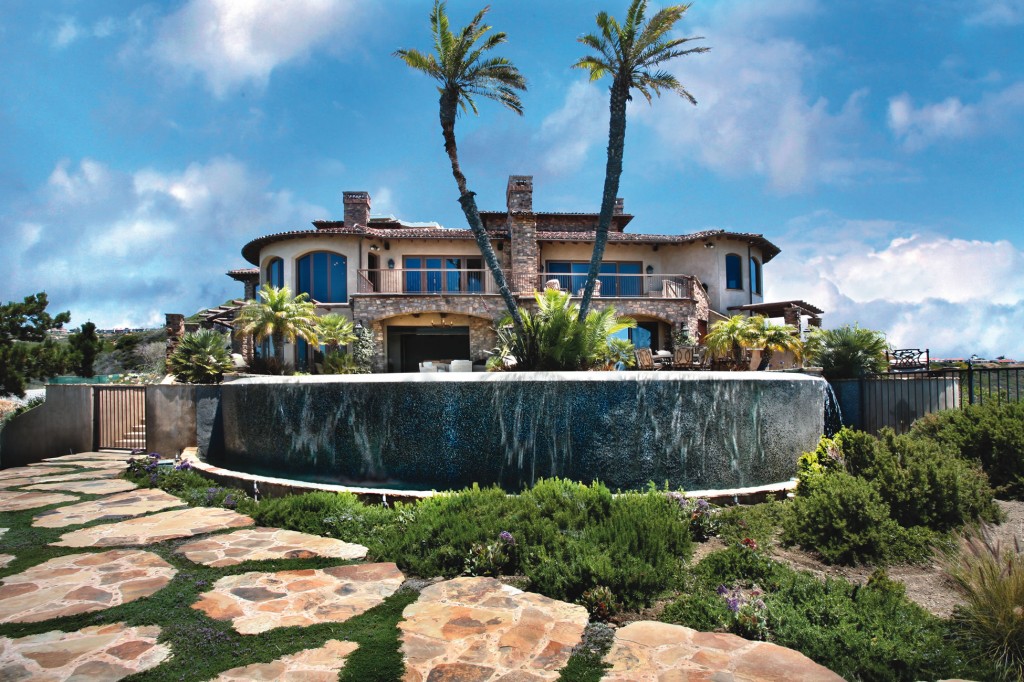 Additional creative nuances include an infinity pool that melts into the horizon, a spacious open-air patio, a covered area for lounging near the outdoor fireplace and stone paths that offer 270-degree views of the coastline from San Diego to Palos Verdes.

The crowning touch for James, however, is the pair of palms trees that tower over the infinity pool and can be spotted as far as Main Beach. The trees have become something of a local landmark, and James says that dreaming up design signatures like the palms has only added to his passion for the craft. 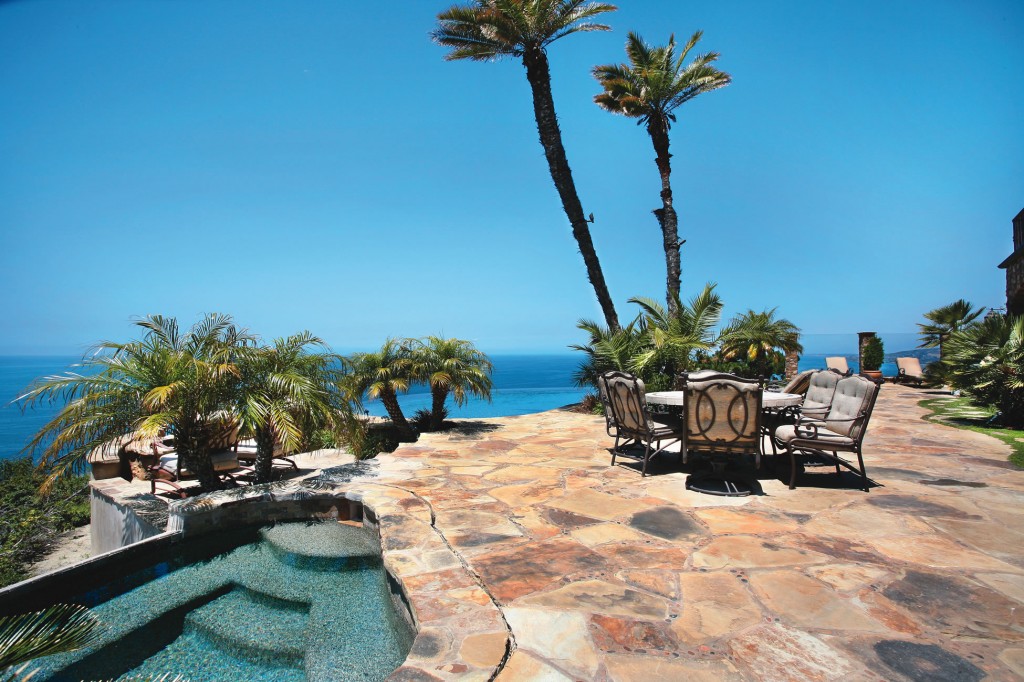 Many people dream of living next to the ocean, but few ever get to experience the reality of a seaside home. One couple harbored this same dream until finally discovering a house that’s not only situated directly on the coast, but also comes with a unique history dating back to the 1920s. 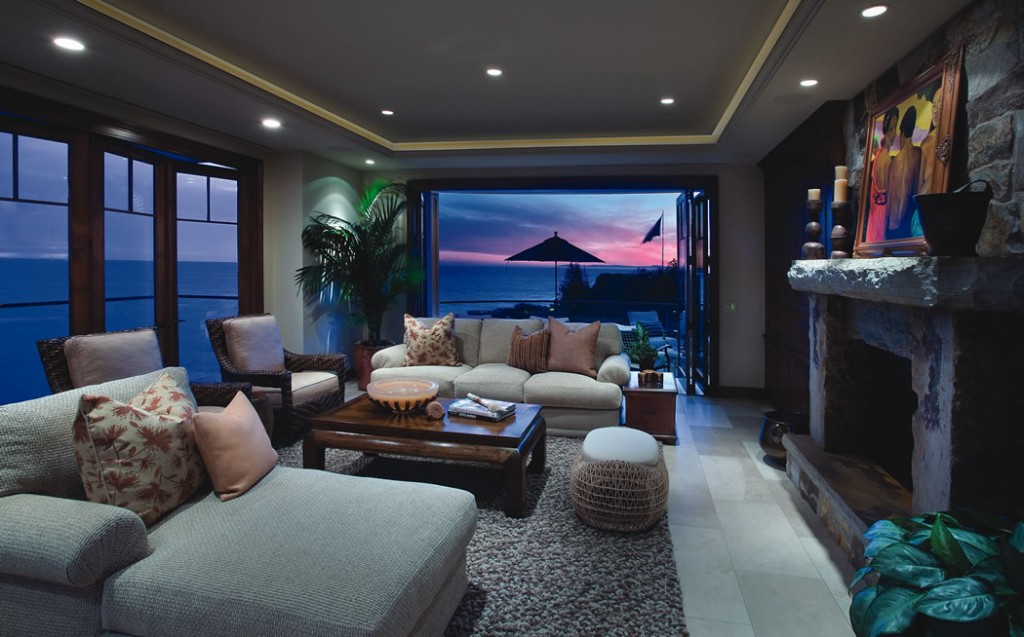 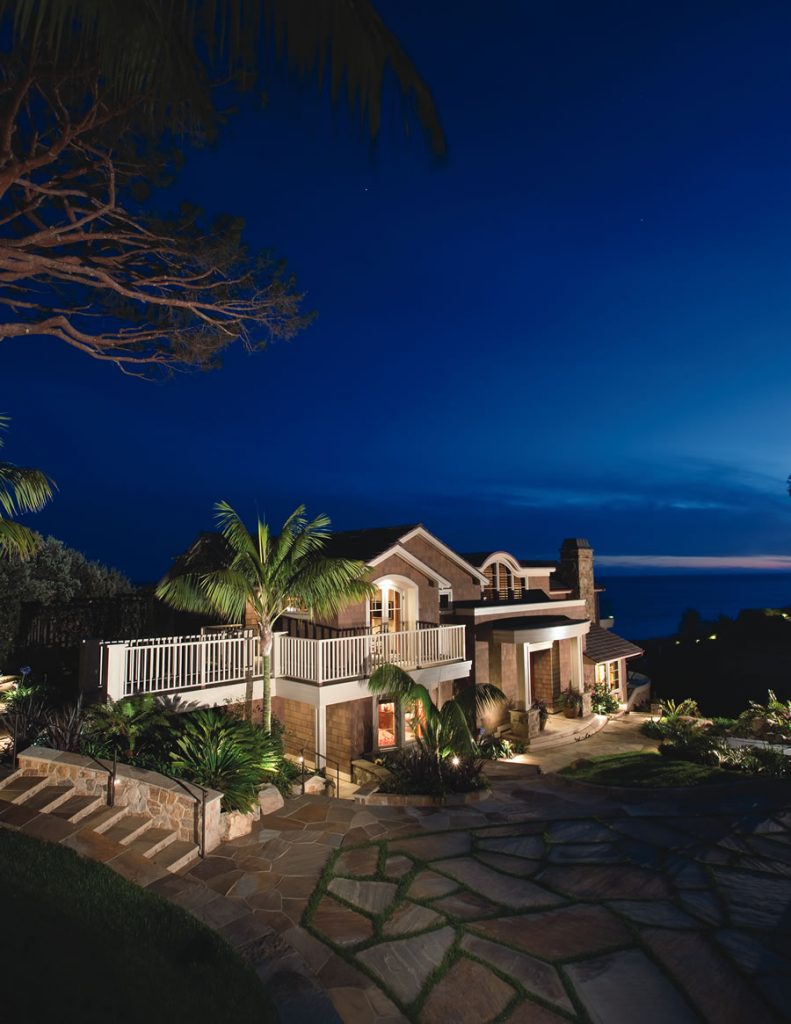 Built in the style of an East Coast estate, the home consists of a primary residence, guest cottage and garage. With Morris’ principal design, E. M. Sumrall Interiors’ assistance with the space planning, Larry Steinle’s landscape architecture and Keith Gallo’s construction, many of the exterior characteristics of the main house were maintained even as the floor plan was expanded and the interior rooms’ development modified to take advantage of the ocean views, including a circular patio where 180-degree views can be seen. The revamp also entailed enhancing the aesthetics and functionality of several outdoor patio terraces, pools and entertainment areas, resulting in a home that has been adapted for the homeowners’ needs while preserving the historical elements of the overall estate. LBM