It’s been nearly two decades since Gorjana Reidel started designing jewelry, initially finding her passion for the art form while working at Neiman Marcus. Shifting her focus to fine jewelry, a new job with a luxury designer taught her the importance of high-quality materials and showed her the beauty of crafting pieces with vibrant gemstones, but it wasn’t until 2020 that she finally took the leap into creating fine jewelry of her own.

“I think fine [jewelry] was kind of a natural progression,” Reidel notes. “You never have to take it off.”

These new collections are different from her fashion lines, but the dedication behind it is the same. As gorjana’s success continues to build, it’s the perfect step toward taking the brand to new heights in both the fine and fashion realms.

It was 2003 when gorjana got its start, with Reidel crafting pieces at home in the apartment she shared with her husband, Jason. The couple married earlier that same year after having met in college, with Reidel living in Yugoslavia and Canada before her family made its way to America and his story starting in upstate New York.

Both graduating with degrees in marketing, they had some other projects in the works, but as friends and family praised her work, Reidel’s passion for jewelry slowly flourished into a full-fledged career.

“That was centuries ago,” she recalls. “… Being 22, I could really only afford a certain price point. But I realized … that I could make [the jewelry] … at a reasonable price point that my friends and I could afford to buy and still have it be beautiful and amazing, and that’s kind of where it stemmed from.”

The road to success wasn’t easy, with Reidel and her husband putting in tons of legwork to get the business off the ground. From wandering door-to-door selling jewelry directly to specialty boutiques to fulfilling orders from the living room floor, it was clear that the brand was on the rise, eventually becoming a combination wholesale/e-commerce company.

Then, in September 2016, the couple, who live here in town, opened their first brick-and-mortar store in the heart of downtown Laguna (their headquarters is also in Laguna Canyon). Small but mighty, the quaint Beach Street shop is quick to draw passersby in with its welcoming design: crisp, white walls and wood flooring, plus natural light streaming in the windows, all accented with touches of gold.

In less than six years, gorjana has expanded exponentially, it seems, now operating more than 30 boutiques across the country—including one at nearby Fashion Island in Newport Beach as well as shops in Texas, Tennessee and even Washington, D.C. “Obviously a lot of our stores are in Southern California and then in Northern California, but now to be opening in places like Austin and Chicago and Nashville and Boston and Georgetown, and to see the overwhelmingly amazing response the customer has, has been just amazing,” she shares.

Reidel says that finding unique, quirky spaces for the stores is one of her favorite aspects. “We get to kind of bring it to life and make it ours, so that’s really rewarding.” The recently opened Park City, Utah, boutique veered a bit from the brand’s typical modern coastal vibe, with the design leaning into the ski resort atmosphere with more wood. “It turned out so beautiful,” Reidel says. “So that one’s great, but … there’s so many, it’s hard to pick your favorite. They all have these little individual things that I love about them.”

All of the success gorjana has realized is still surprising to Reidel, even after all this time. “It just stemmed from this personal, kind of creative thing—almost like your own DIY project,” she says. “And it has evolved into this massive business that it is today. … But that still stems really from that initial ‘making it approachable’ [business model]; that sensibility is still really what the brand is all about.”

A Stylish Step Up

With her job in fine jewelry propelling her to create her own pieces, it seems only right that she would bring it full circle with a luxury collection of her own. Although it took nearly 20 years, she says it feels like a natural evolution for the gorjana brand.

With fashion pieces, she says they’re able to be bigger and bolder, adding touches of fun to the design, while the fine jewelry is more dainty, letting the beauty of the stones shine. “I think, when we’re dealing with diamonds and [other gemstones, we’re] … able to focus in on the stones and how we’re setting them,” she says. “They’re so pretty and there’s a much more delicate nature to it when you’re really focusing in on the detail of it. … Being able to play with that and embracing that has been really fun.”

While many of the fashion items are gold-plated, all of the fine jewelry is 14-karat or 18-karat gold. Even though this expansion is still new, gorjana has already incorporated a great deal of gems, ranging from diamonds and sapphires to opals, moonstone, morganite and topaz.

One thing that is important to Reidel is continuing to provide a level of comfort with her collections. “With the fine jewelry, because it is so delicate, you kind of forget you’re wearing it, and I love that,” she notes. “I love that … it adds a little bit of shimmer, a little bit of sparkle. I love how timeless and classic it is.”

While the fashion pieces are wrapped up in fun—“We can do some bolder, seasonal items that we think are of the moment,” she says—Reidel and her team view the fine jewelry as heirloom-type pieces that have that timeless appeal and can really be worn with anything. “I want you to wear something and be able to pass it down to your daughter or niece, whoever, [and] just have it forever,” she adds.

Already, the customer response to the new pieces has been incredibly optimistic. “It’s so awesome … to see our customers’ reactions to it. It’s been overwhelmingly positive,” Reidel shares. “I think it’s beyond what we expected so that’s been really rewarding, too.”

Gorjana’s designs have always been widely regarded by the brand’s clientele, and Reidel attributes that to three things: quality, customer service and their timeless nature (the latter of which she says is even more relevant with the fine jewelry collections).

“We really put the customer first and we really focus on our product,” she explains. “… I want you to buy the jewelry and fall in love with it and wear it for years and years. … There’s something there that you can keep coming back to and I think that’s what people like, what people are drawn to.”

The ability to mix and match or layer the pieces is also a factor in their popularity, something that has been enhanced even further by adding fine jewelry into the mix. “All of it, fashion, fine—it layers beautifully together and I think that’s what the customers are loving,” she says, noting that, while some clients stick with one or the other, the majority are incorporating pieces from both in their wardrobe.

“I love when you have a diamond solitaire necklace and then you put a Parker with it,” Reidel says of the brand’s simple chain-link necklace. “And then add maybe a charm to that or a turquoise strand. We’re really mindful when we are designing of how this layers to that. We really want to make sure it all goes together. Because my thing is, I want you to be able to create your look so I want you to come in and … it should all mix and match.”

One of Reidel’s favorite pieces from the collection is the evil eye necklace. “Most evil eyes have a colored center and ours has this really beautiful opal so it’s very neutral and goes with everything and has diamonds around the outside,” she explains.

Some other necklaces she often wears herself are the Diamond Parker, a miniature necklace in the Parker style with a diamond clasp, and the Diamond Wilder, which offers a classic silhouette, a thicker chain and a solitaire diamond at its center. “Those are my three necklaces that I layer all the time and have for the past three months,” she adds.

The bracelets, too, are often found around her wrists, especially the Diamond Bar Bracelet, which has a dainty chain complete with tiny diamonds. “Then we have a tennis bracelet that we launched for the holidays that was a special edition and we’re doing another one in summer that is just beautiful that I wear all the time too. It’s a great everyday little row of diamonds.”

New pieces will continue to be added at gorjana stores nationwide, as she says new deliveries take place each month—sometimes fine, sometimes fashion. “It kind of goes back and forth depending on the season,” Reidel reveals.

As the brand’s 20th anniversary approaches in 2023, she hopes to continue to expand into new cities. “It’s being so well-received all over that we want to see what other cool markets we can open stores in,” she says.

And while opening new boutiques will continue to be at the forefront of the business, Reidel adds that she hopes to keep evolving the jewelry as well. “We have a certain brand aesthetic and I think [we want to focus on] keeping that going and also having fun along the way and not taking everything so seriously. If anything, over the last two years with COVID, … [I’m] realizing that life is short and you need to just make the best of it and do something you have fun doing and laugh along the way.” 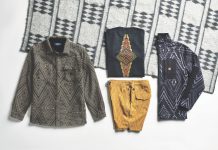