For centuries, the dinner table has served as one of the focal points of the household, drawing members around its edges as a communal gathering place of consumption and conversation. Food and family, it seems, go hand in hand; ancestral recipes are bestowed upon children and cherished like antique heirlooms.

In fact, researchers in recent years have found a connection between nostalgia and culinary inclinations: Smell and taste are proven to trigger detailed, emotional memories. It’s why a whiff of chocolate chip cake can evoke the comforts of a grandmother’s kitchen, or the spiciness of miso on the tongue can serve as a reminder of a past birthday celebration. On the following pages, four Laguna Beach chefs share family recipes they’ve preserved for themselves or passed on to their own sons and daughters, letting us in on the memories that accompany them.

Five years after Marc Cohen opened 230 Forest Avenue in 1994, the chef found himself at the helm of a second Orange County restaurant, Opah Seafood Grill. It was a busy time, and the 80-hour workweek began taking a toll. But on his birthday that October, the Baltimore native received a package postmarked from the East Coast: It was a chocolate chip cake—baked by his sister, Lisa—shipped all the way from Maryland. “When you get that, you’re like, ‘Everything’s OK,’ ” Marc recalls.

Made from a recipe that originated with his grandmother, the cake dates back more than 50 years, its chocolate swirls emblematic of comfort and special occasions. The chef remembers its cinnamon aroma wafting out of his grandmother’s kitchen and today has brought the dessert into his own home. Marc’s 15-year-old daughter, Sydney, heads into their kitchen on his birthday and Father’s Day—or when he’s had a bad day—to bake the confection.

Marc inherited his love of cooking from his grandmother and his work ethic from his grandfather, who grew a candy and tobacco business out of the back of his trunk in Baltimore in the mid-1950s. The chef has continued to bring the flavors of his past into his own family—he flies in Maryland crabs every year for a steamed feast at home—but he’s passed on more than just an East Coast flavor profile. When Sydney, 18-year-old Jacob and 14-year-old Emma were young, Marc instituted a grocery store rule in which his kids had to pick out foods they’d never tried, from kiwi and kumquat to cactus and dragon fruit.

“It’s important to me that they never say ‘no’ [and] be open-minded about what [they’re] going to try,” Marc says.

Though their meals together are limited each week, Marc and his family still bond over food—Sydney was a hostess at 230 Forest Avenue last summer, while Jacob has worked in prep at Watermarc. Since the age of 6, Sydney asked her father to describe daily problems at the restaurant so she could role-play handling them. Now she not only manages them herself, but she loves to cook alongside her father the dishes she first tried at a young age—rib-eye is among her favorites. 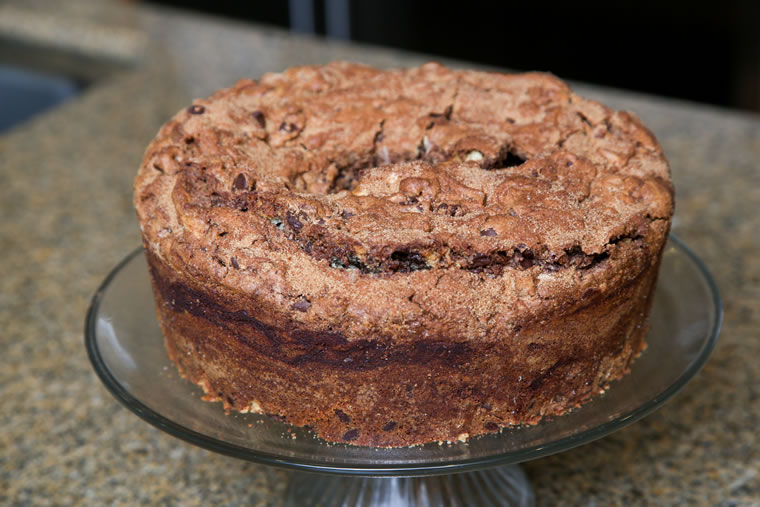 Pour half of the batter into a greased tube cake pan, then top with half of the chocolate chips/melted chocolate/cinnamon mixture; use a butter knife to lightly swirl. Repeat with the remaining batter and swirl, saving some cinnamon sugar for the top.

Bake for 1 hour, then turn off the oven and leave the cake inside with the oven, door open, for 30 minutes. Allow to fully cool before serving.
(Recipe from Marc Cohen)

Easter mornings started bright and early for a young Alessandro Pirozzi. In the wee hours of the holiday, Alessandro and his cousins could be found chasing a chicken around their grandmother’s backyard in Naples, Italy; the first child to wrangle the animal was awarded the largest bowl of minestra, a rapini-style soup made especially to celebrate the occasion. More often than not, the youngster proudly presenting the poultry to their grandmother, Nonna Ida, was Alessandro.

Now at the helm of three Orange County restaurants—including Mare Laguna Beach and Alessa by Chef Pirozzi in town—Alessandro learned to cook in Nonna Ida’s kitchen. He first stood atop her reading chair next to the counter to chop garlic at the age of 4. She offered a reprieve from his three sisters, showing him how to pluck the cherry tomatoes, basil, rosemary and parsley from her garden for recipes. “There are no shortcuts in the kitchen,” she told her grandson, and he took it to heart: To this day, the chef uses only the freshest ingredients in every plate he prepares.

Bay leaves from the garden were used in the vegetable soup she made on Sunday mornings, the aroma of fresh spinach and Parmesan cheese luring her grandchildren to the kitchen table. While the kids shredded chicken by hand for the stock, she scooped ragu into the pot—its rich, tomato flavor blending with the chicken broth—before handing out her homemade bread, which was “crispy like a crouton,” for dipping. “Every time I think about it, I get goose bumps,” Alessandro says of the soup he now serves at his restaurants.

But Nonna Ida wasn’t Alessandro’s only culinary mentor. From the age of 12, he cooked alongside his uncle and godfather, Ugo D’Orso, a former professor at the Istituto Alberghiero Napoli (Naples Culinary Hotel Institute), learning the art of skilled preparation and Italian tradition.

Ugo’s influence can be seen in Mare Laguna Beach’s limoncello-infused radiatori, variations of which are also served at Alessa by Chef Pirozzi and Pirozzi Corona Del Mar. The dish was born late one night when Alessandro and his uncle became “a little buzzed” while making limoncello delizia, a sponge cake, for a wedding the next day. Instead of the dessert, they concocted limoncello-infused pasta dough—pounds of which they’ve now sold into the thousands—before whipping up a cake for the bride the next morning. 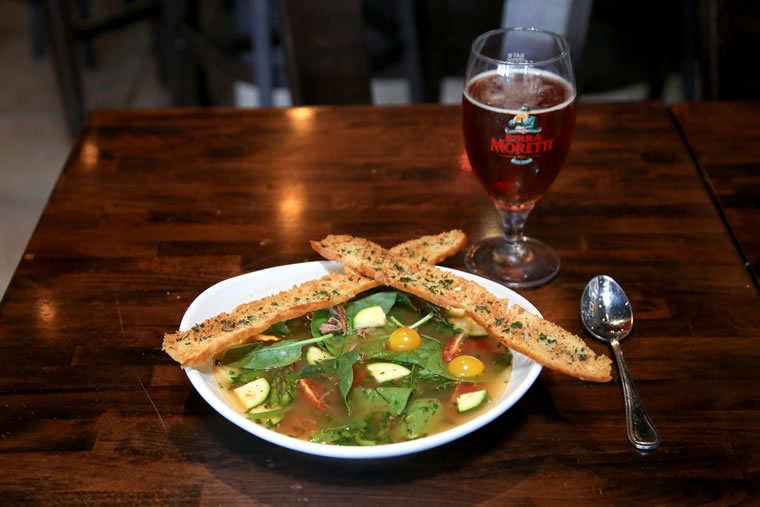 Salt and pepper to taste

Growing up in Seoul, South Korea, Okura Robata Grill & Sushi Bar Executive Chef Jin Heo remembers the distinct flavor profile that emerged from his grandmother’s homemade miso: spicy and strong. A thick paste made from soybeans, salt and koji (a fungus), miso found its way into many of the dishes made by Jin’s mother. She added it to cucumber salads, and on special occasions—when the family’s meal included the addition of a protein on top of vegetables and rice—she’d mix it into a marinade of seaweed, sesame seed oil, garlic and chili powder for fish.

A staple in traditional Asian diets for centuries, miso is frequently used in soups and dipping sauces. Its enzyme-rich antioxidant properties are thought to prevent heart disease and cancer; as a child, Jin was burned by hot water while preparing a meal, and his mother dabbed the paste onto his skin to heal the wound. Fermented for two months to three years in an aging process similar to that of cheese and wine, miso is salty and pungent—American epicureans do not usually appreciate its flavor.

“When they eat that kind of dish, they [brush their teeth] because it’s very strong,” Jin says of his mother’s marinated fish. At Okura, he transforms the dishes of his childhood into plates compatible with the American palate.

“I miss my mom’s taste,” Jin says of the flavors of his mother’s cooking (she passed away 15 years ago). “In my head, [I’ve] memorized her taste … When I try something now, I try to make a similar [taste].”

Saikyo miso sea bass is the chef’s take on his mother’s celebratory meal, a tender filet coated with a marinade featuring three types of miso: Saikyo offers the sweetest flavor, while shiro and hatcho are much saltier. Jin says his mother soaked her fish in milk for 15 minutes to remove the smell and heighten the tenderness, and though he can’t do the same for the 20-pound sea bass he buys for the restaurant, he continues the tradition when he cooks smaller fish.

The dish isn’t the only plate on Okura’s menu paying homage to Jin’s mother: The base of his miso soup—a stock made of dried anchovy powder and dried kelp—is the same one that she used in her own broth years ago. 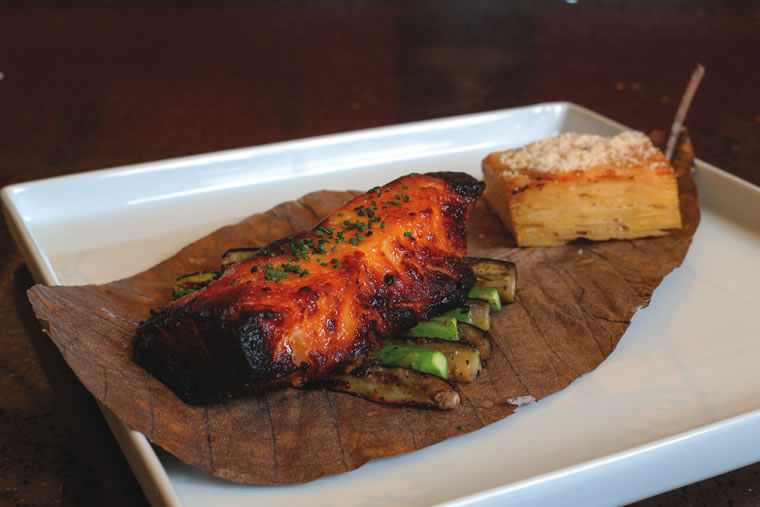 Pinch of finely chopped chives
Preheat oven to 400 degrees. Sprinkle salt on top of the sea bass and let sit for 15 minutes before cleaning.

Boil down the mirin and sake as a reduction, then add all three misos and let simmer on low heat for 5 minutes. Add garlic, sugar and butter; let simmer for 10 minutes. Turn off heat and add yuzu juice.

Marinate the sea bass in a storage bag for 41 hours, mixing well every 10 hours.

Encase in foil and bake for 18-25 minutes, removing foil cover for the last 3 minutes to achieve crispiness. Garnish with chives.
(Recipe from Jin Heo)

Long hours don’t stop Craig Connole from cooking for his son, Jack, every day. When the K’ya Bistro Bar chef arrives home from work late in the evenings, he heads straight for the kitchen when his wife asks, “What’s Jack having for lunch tomorrow?” Since his 16-year-old was in first grade, Craig has cooked a hot meal—think homemade stir-fry in a thermos—for his son to take to school.

These days, Jack participates in the preparation, as the kitchen becomes a gathering place for the Connoles to recap the day. Though Jack inherited more of a “foodie” appetite than a passion for cooking—Craig marvels at his son’s inclination toward quail egg shooters and uni—the pair enjoys cooking together on weekend mornings when the chef divulges the art of French toast and breakfast burritos.

Craig cooks for Jack like his mother, Sylvia, cooked for him. Born and raised in Newport Beach, Craig remembers the enticing smells of homemade lasagna and jalapeno cornbread wafting out of his mother’s oven when he got home from school. “[She] is where I got my inspiration to cook,” Craig says. “I learned everything from her.”

With a large extended family situated in Orange County, Sylvia could often be found in the kitchen alongside her twin sister, Diana Woodaman, the duo known for baking decadent cakes fit for high-end bakeries.

To this day, Craig and his family eat with his parents once a week—Sylvia cooks—and he keeps her culinary inspiration alive in his restaurants. The chef has served his mother’s bananas Foster bread pudding in nearly all of his establishments, including K’ya Bistro Bar, over the past 25 years. “[It’s] a home run every time,” Craig says of the dessert.

Made with bananas, brioche and homemade caramel sauce, the mouthwatering recipe comes from a cookbook Craig keeps in his possession: a collection of Sylvia and Diana’s recipes compiled by the sisters themselves.

And Craig isn’t the only local chef in Orange County carrying on the twins’ tradition—his cousin and Diana’s son, Scott Brandon, rolled out a new menu featuring American comfort food at The Observatory in Santa Ana earlier this year. 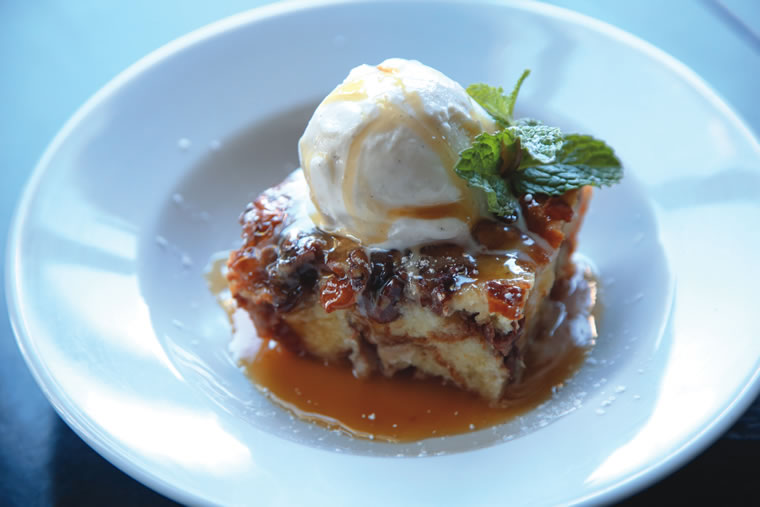 Pour mixture into prepared baking dish.  Cover tightly with plastic wrap and foil. Place in a water bath (larger pan with about an inch of water in the bottom) and bake for 50 minutes.

Remove from oven, uncover and pour caramel topping over the baked pudding. Return to oven and bake an additional 15 minutes uncovered.
Caramel Topping