The Plein Air Painting Invitational transforms the entire city into an outdoor art studio for its 14th year.– By Daniella Walsh 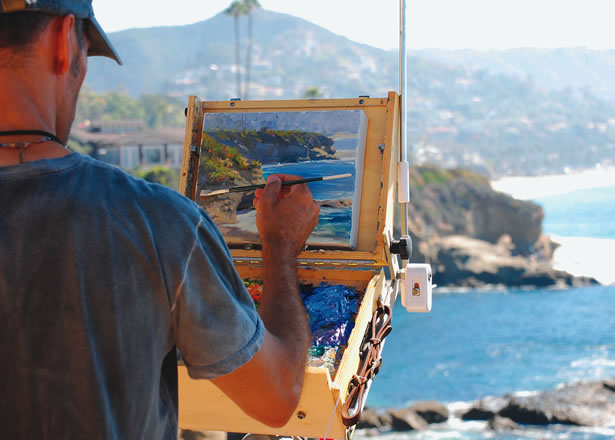 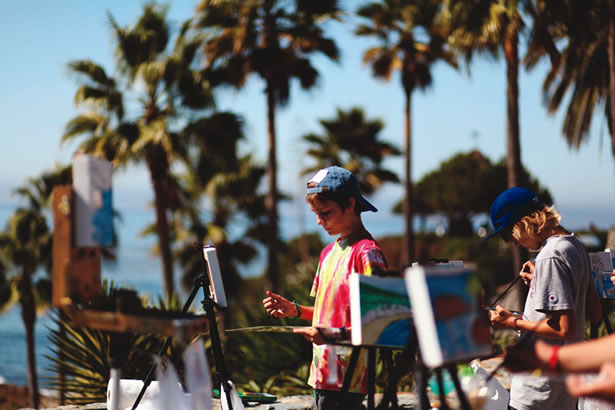 On Oct. 14 – 21, the Laguna Plein Air Painters Association (LPAPA) will host the 14th Annual Laguna Beach Plein Air Painting Invitational, a yearly event that will draw 40 plein air painters to our shores, canyons and other scenic points in the city, and bring schoolchildren and the public out to enjoy and learn about the art form.

In collaboration with the Laguna Art Museum, the festival will once again kick off Sunday, Oct. 14, with a quick draw in Heisler Park, a favorite spot for painters since Laguna was first established as an art colony. In two hours, the painters will record their favorite vistas.

The idea is to get the public excited about things to come by exhibiting the canvasses at the Laguna Art Museum and offering them, with the paint barely dry, for sale at reasonable prices. Varying in size, the Heisler studies will sell at silent auction at the museum on Sunday afternoon, with minimum bids set at 50 percent of the retail value set by the artist, says LPAPA Executive Director Rosemary Swimm.

The week promises to offer engaging events for audiences of all ages: The next generations ranging from grade school to college-age painters will have their own Heisler Park paint out, and those curious about the whys and wherefores of plein air will be able to watch a painting demonstration and two lectures at the Laguna Art Museum. Paint outs by the invited participants at Crystal Cove and Laguna Canyon are also open to the public. A silent auction of everyone’s output and a gala reception will cap off the week. 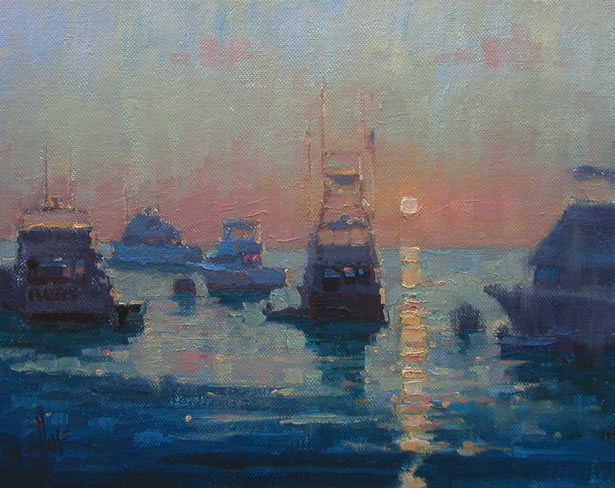 Debra Huse, a Newport Beach-based painter and gallerist, has been a regular participant since 2005 and counts Heisler Park among her favorite haunts. But with the invitational lasting an entire week, she plans to play the field. “I plan to use that week to challenge myself, to find new spots among the coast and in the canyon,” she says.

Artists may cover territory including Laguna Canyon and the coastline roughly between Huntington Beach and San Clemente. Debra explains that painters tend to head for the canyon in the morning while the marine layer still shrouds the coastline and return to the water’s edge once it burns off. “When there is a marine layer, I head for the sycamore trees,” she says.

A painter since childhood, Debra says she has something different in mind this time: Since she and her husband own a fishing trawler-type boat, which at times serves as a water-borne studio, she will tackle a lot of seascapes and water studies. “It’s a bit of rock ’n’ roll, but if you steer into the wind and the water is not too rough, the boat is a great vantage point,” Debra says. 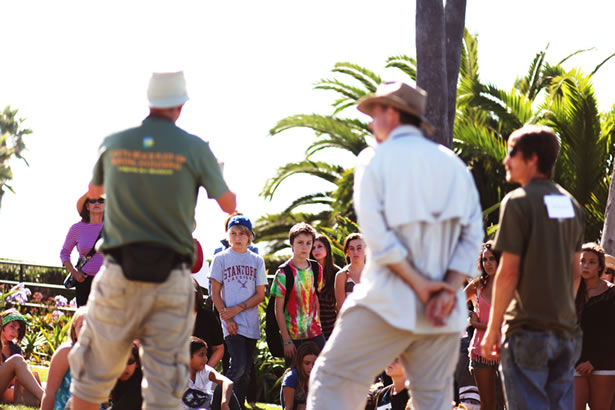 Just as last year, students from El Morro Elementary School, Thurston Middle School and Laguna Beach High School will congregate with their teachers and proud parents for their own paint out led by artist Rick Delanty of San Clemente, followed by their own two-day exhibit at Laguna Art Museum’s Brief Gallery. All works will be for sale for $50, benefitting the students and their schools.

“What the kids take away from those couple of hours is what artists do and the importance of relating to the environment,” Rick says. “It takes them away from the routine of school and opens another world—most kids did not want to leave last year.”

In addition to being a plein air painter, Rick is a high school art teacher and exhibits his work at the Festival of Arts, where this year he unveiled his latest body of work called, “Living Water.” He is also an artist in residence at Crystal Cove Park, a position that involves giving painting demonstrations and being a docent on the site.

Rick’s work is somewhat unusual since he has switched out oil paints for acrylic paints of a new brand. According to Rick, Golden Open paints have revolutionized acrylics from a slightly dull, plastic-looking water-based medium to one that even expert eyes have trouble distinguishing from traditional oils. 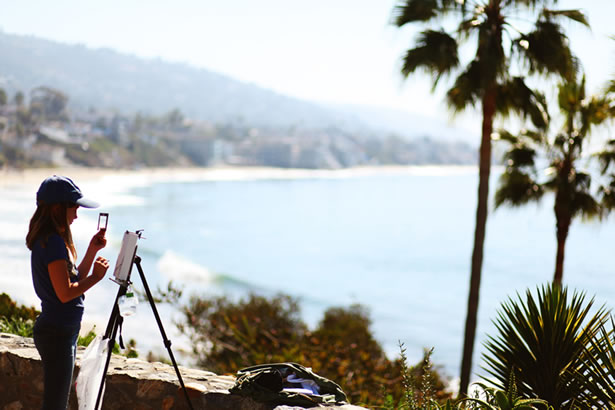 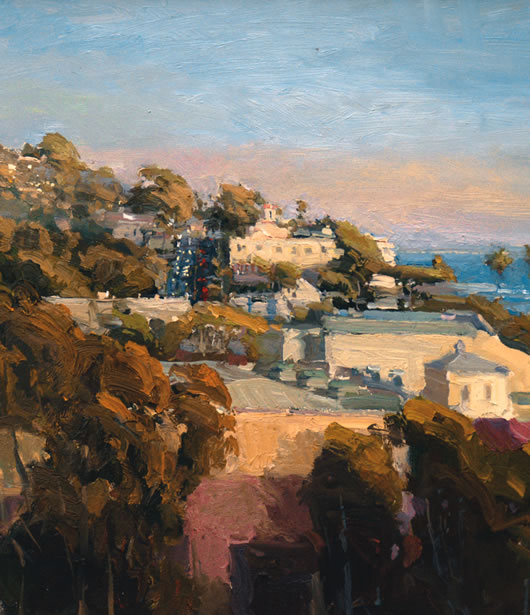 Light, color, line and mass: Few art genres concentrate on the four as much as landscape painting does and, historically, artists have been drawn to Southern California for its unique pink light. Sharp eyes can still notice it today, even though smog has dulled it somewhat—luckily not enough to shroud its magic.

“My belief is that landscape is the most noble of pictorial arts,” says Jean Stern, executive director of the Irvine Museum, a venue specializing in California impressionist and plein air artists. “People are drawn toward nature and a landscape painting will transport them, whether they live in an apartment in the city or a house in the suburbs. Nature recharges the spirit.”

Calling plein air the most honest form of painting and light a conduit for spirituality in painting, Jean says that even while painting cityscapes, artists find beauty in places that most do not see, but that they are willing to share with the world.

Jean will also hold a lecture on Oct. 16 about how to hone an eye for art, using plein air paintings by past and present greats such as Guy Rose or Ken Auster as standard setters at the Laguna Art Museum.

Ray Redfern, a favorite gallerist for collectors of California impressionists for 35 years, says that regardless of the times, nature is always appealing. Asked about the visual distinction between the old and the new, he explains that the main difference lies in the palette. “Historical painters had only so many colors, perhaps eight, that they had to work with,” Ray says. “Today, there are at least 120 that are readily available.”

One should note that those eight tubes yielded an impressive number of hues. And, while a limited palette might have prevented great flights of fantasy for the “Old Guard” like Joseph Kleitsch, for example, artists still found ways to tweak what they saw.

Eric Jessen, a historian who scouts the locations of where early plein air painters traveled and painted says that artists in the early 1900s were all over the place. “They did not just move between six locations,” he says. “The tendency was that if they were not in the canyon and painting ridge lines, they were up and down the coastline, from Victoria Beach to Crescent Bay.” He notes that even during the entire time of Laguna’s gradual transition from bucolic village to urban tourist spot, painters recorded those changes as well.

Then again, Eric’s research shows how artists, driven by personal aesthetics, had no qualms about moving a few landscape elements or adding or subtracting some. Some of plein air artist Edgar Payne’s paintings done in the Sierra Nevada show how he would affect geographical shifts in the name of compositional aesthetics, which often made deciphering locations where he had painted a challenge.

One of LPAPA’s founders, Jacobus Baas, has only missed one year since the first paint out in 1998. A self-described former “surf bum,” he recalls being put into his first art class by a savvy high school teacher. Apparently, this art therapy took. He started out making jewelry but found his passion in painting. “The paint out is a lot of fun, a great place to paint with peers while the museum offers a chance for many to be exhibited in a professional manner,” he says. “It’s one of the best in the country.” Jacobus explains that even though he has painted just about every spot around here, it’s still a joy to discover new ones.

Since Laguna Beach is home to the Laguna College of Art and Design, a group of students competing for scholarships will also participate in the Heisler Park paint outs and put their work up at the Laguna Art Museum sale.

Last year the event, which is a major fundraiser for LPAPA and the museum, grossed $180,000, including donations, ticket sales and art purchases. Artists receive a percentage from the sale of their work.

“I am hoping for wonderful things again this year, even though in the art world one can never predict,” Rosemary says. “It’s clear that plein air is growing with new artists stepping in and old-timers representing the tried and true. Above all, it’s always fun for everyone, the artists and the community.” LBM