The lines between fact and fiction may have blurred in recent years, but Laguna’s illicit past draws real-life parallels to our present.

It was one of the worst drug-related murders in Laguna Beach history.

The killers had forced their way in through the front door. The male victim took bullets to both kneecaps before his execution. A second victim, a young female, was shot in the face at point-blank range. Two accomplices, dressed as gardeners, worked loud leaf-blowing machines outside the home to mask the sound of gunfire. 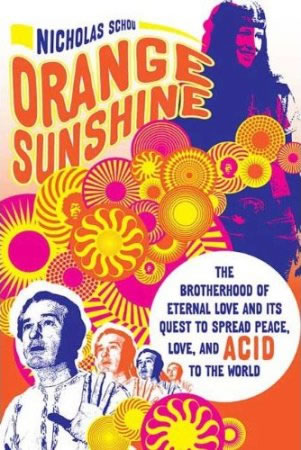 The gunman (also the leader of the operation) was later discovered to be Miguel “Lado” Arroyo, the main muscle of an especially violent Mexican drug cartel.

But these murders never actually happened, and Miguel Arroyo is a fictional character. This vivid picture is instead a scene from Oliver Stone’s Laguna Beach-set movie “Savages” (2012), adopted from the Don Winslow crime novel of the same name published in 2010.

Scenes for the film were shot in Laguna in September 2011 to capture an authentic look—the majestic shoreline, fabulously blue skies and crazy expensive views. That’s about as realistic as it got. A medical marijuana dispensary among the high-end restaurants and chic boutiques of Forest Avenue? Yeah, right.

Yet, the fiction of Winslow’s “Savages” and its 2012 prequel, “The Kings of Cool,” does have roots in a particularly colorful part of Laguna Beach history: the Brotherhood of Eternal Love, a loose spiritual organization that sought to raise consciousness through the use and distribution of LSD. Much has been written about the Brotherhood, and the multitude of stories from this long-gone moment in time have never lacked for a good retelling—be it legend or a new version of someone else’s truth.

The Brotherhood of Eternal Love, an Anaheim-born group of young people, moved to the city in 1966 for the easy access to the waves as well as the inexpensive housing—yes, Laguna Beach was once a cheap place to live—on Woodland Drive, just off Laguna Canyon Road.

“They were these working-class guys who were into surfing, and they wanted to live close to the ocean,” says Nick Schou, author of the 2010 book “Orange Sunshine: The Brotherhood of Eternal Love and Its Quest to Spread Peace, Love, and Acid to the World.”

The group’s mission was to spread its theology through the use of LSD, its particular brand of acid garnering the name Orange Sunshine. The Brotherhood’s leader, John Griggs, befriended LSD guru Timothy Leary, who would come to spend much time in Laguna Beach.

“They encouraged everybody to view LSD as a sacrament, in the sense that it opened up new doors of perception,” Schou says. “They were influenced by the Tibetan Book of the Dead, Eastern religions and mystics, vegetarianism and pacifism. It was a tight-knit group. To be a member of the Brotherhood, you had to be trusted, because they were a criminal enterprise, since they formed right after LSD became illegal.”

In 1967, the Brotherhood opened Mystic Arts World at 670 S. Coast Hwy., which became its temple/head shop where members sold love beads, health food and assorted accouterments of the counterculture. It eventually expanded LSD marketing into a hashish-smuggling operation, with members flying to Afghanistan and bringing back the contraband in musical instruments, hollowed-out surfboards and Volkswagen buses shipped through the Port of Long Beach.

Artist Nick Hernandez arrived in Laguna Beach in 1968 and quickly got to know some of the members. “They had these giant water pipes where they would put an ounce of hash in there, then suck it in and blow it out their nostrils, like they were dragons,” recalls Hernandez, who went to many of the Brotherhood’s parties. “In their temple, they had big statues of the Hindu gods and goddesses, all made of pure hash. How that never got out, I’ll never know, but that’s how tight they were.”

The night of Dec. 26, 1968, marked a turning point for the Brotherhood, when police officer Neil Purcell busted Leary and his wife, who were in a parked car on Woodland Drive and in possession of 2 kilograms of marijuana and hashish. The national attention the arrest gave Laguna Beach turned the heat way up on the Brotherhood’s operation. (Years later, Purcell would become police chief, so revered among the department even today that he’s the only one with a framed photo in the department’s lobby.)

In the months afterward, much of the Brotherhood relocated to Idyllwild, but a faction remained in Laguna Beach after another Brotherhood associate, John Gale, became the group’s de facto leader. It was Gale who famously hired an airplane to drop LSD tabs on the crowd that had gathered for the legendary Christmas Happening of 1970, when thousands turned out for a badly planned music festival in Laguna Canyon. This was the same festival where it’s rumored that police dug a huge hole in the ground and buried all the confiscated drugs. (But don’t go there looking with a shovel in your hand—the site has since become a protected wilderness area.)

“The Brotherhood’s activities started attracting more people into Laguna who wanted to get in on the action,” Schou says. “Things got to be more party-oriented and there was a lot of free love going on. That attracted a wilder element. The same thing happened after the Summer of Love and Haight-Ashbury in San Francisco. All those people on psychedelics, it attracted a lot of shady characters.”

Hernandez adds that by 1977, drugs and violence were becoming the norm. As a longhaired plumber, he was trusted enough to be given access to the homes of some of the city’s big-time operators. He guesses that around 20 percent of all the houses in the city at that time—from what he’d seen—had small marijuana cultivation setups.

“It was raging,” Hernandez says. “Some of the biggest dealers in town that I knew were smart enough to not call attention to themselves, but they all kept shotguns by their front doors and pistols under their couch cushions. Once cocaine started to come into the city, though, that’s when the era really was over. People started getting greedy and they were buying big homes and getting more paranoid.”

As the 1970s wore on, Laguna’s drug issues became more public. In November 1977, the president of the Laguna Beach Hare Krishna temple was indicted for conspiring to murder a Newport Beach drug dealer. According to an account in the book “Betrayal of the Spirit” by Nori J. Muster (2001), several Laguna Krishnas had teamed up with a few former Brotherhood members and started smuggling hash oil through Pakistan in plastic typewriter cases. They brought the oil back to Laguna, packaged it in baby bottles, and sold them for $11,000 each.

Gale, meanwhile, had become a hardcore cocaine dealer, Schou says. In 1980, he was arrested in Laguna Beach with guns and $1 million in cash.

“A lot of people in Laguna associate Gale with the Brotherhood, more so than Griggs,” Schou says. “He ended up dying in a car crash in 1982, and it’s been speculated that he had a large amount of cash on him at the time. He became this mythic figure, and since there were no direct witnesses to the crash, some people say that he’s still alive—you will occasionally see bumper stickers on cars in Laguna that say ‘JG LIVES,’ from people who say that he’s actually in the witness protection program, that his dad was a dentist and they put fake teeth on the body.”

When Present Mirrors Past

Today’s Laguna Beach is nothing like it was during the Brotherhood era, according to Sgt. Tim Kleiser of the Laguna Beach Police Department. “Most people outside of Laguna Beach see the city as an arts community, not really a drug community,” says Kleiser, who’s been with the force since 2003.

“The only thing I’ve noticed in terms of unusual drug activity is a spike in DUI drug arrests, but that’s been pretty consistent across the county,” he adds. “And it’s everything from marijuana to prescription drugs, from juveniles all the way to adults. We also don’t really see any criminal element of the kind that there was during that era.”

Though a prominent drug culture in present-day Laguna may not seem as overt as it was during the Brotherhood’s time, it can still be monitored at one level: the Laguna Beach Unified School District.

As with all districts, LBUSD has programs that warn students of the dangers of alcohol, tobacco and drug use. But Amy Kernan, coordinator of special projects for the district, says that such programs only go so far.

“There’s a lot of pressure for our students to get into Harvard and Stanford and other highly regarded colleges and take a lot of advanced placement courses, and that pressure is probably more widespread here than in other districts,” Kernan says. “… Eighty percent of our kids are coming from affluent houses, where their parents went to college or have a graduate degree, so it’s drilled into them that they also have to go to a four-year university. They don’t even want to talk about community colleges.”

Because of that pressure, Kernan says that some students self-medicate by drinking and using marijuana, or even turn to prescription drugs. Judging from the results of the anonymous California Healthy Kids surveys conducted in the district, drugs are relatively easy for students to obtain.

According to the district’s most recent data from 2013/2014, 25 percent of 196 Laguna Beach High School juniors said they have been very high seven or more times, while 54 percent reported current alcohol or drug use. Similarly, 73 percent say it’s either fairly or very easy to obtain marijuana. Of a group of 72 high school staffers surveyed, 62 percent say alcohol and drugs are a severe problem.

“We have students who are admitting they’re depressed because of the pressure to succeed, and there’s a pretty strong correlation between depression and drug use,” Kernan explains (32 percent of the high school junior group reported feelings of chronic sadness/hopelessness, and 16 percent revealed they have considered suicide). “So we’re trying to make sure we get them access to resources and counseling to deal with their anxiety and stress.”

Kernan is also concerned about newer drug delivery tools, such as the rising popularity of electronic cigarettes. These can be used to smoke a liquid form of THC, the ingredient that produces the effect of marijuana.

“Kids are able to go online and see how they can make their own vaporizers, too; then they’re doing drugs through those,” she says. And as efforts grow to legalize and decriminalize marijuana, Kernan sees her job becoming much more difficult.

“Anytime you have a 12-year-old who has a supply line from their 18-year-old brother, … drugs are going to show up more on a middle school campus,” Kernan explains. “… Middle school kids are at the age when they’ll experiment with anything.”

Hernandez has a similar take on Laguna Beach as a whole.

“The city’s drug culture has never really gone away, it’s just better hidden,” he says. “Nobody is a blatant drug dealer, everybody says they don’t do it anymore, but trust me, it’s alive and well. Everybody is just growing it themselves.”

March 2004: Three men are arrested after being under police surveillance at a Coast Highway cafe. They are tailed to Westminster, where police observe them in the process of selling 2 kilograms of cocaine.

July 2007: More than 6,000 marijuana plants are found growing in a remote area of Aliso and Wood Canyons Wilderness Park. The plants are worth an estimated $600,000.

May 2009: Laguna Beach police seize 342 marijuana plants from a home on Baja Street.

August 2013: Two men are caught with 119 packages of marijuana valued at around $4 million after the panga-style boat they’re piloting comes ashore at Laguna Beach.