Dizz’s As Is remains a decades-long favorite among Laguna locals.- By Ashley Breeding 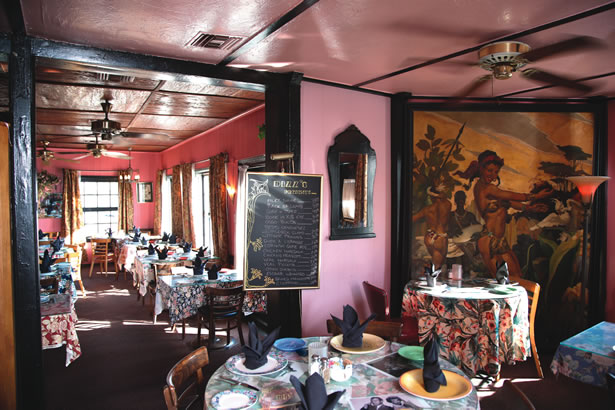 In a town sprinkled with trendy haute cuisine and health-conscious cafes, one gem in south Laguna is still beloved for its authentic “home-cooking” in an atmosphere that feels like grandma’s house—if your grandma was of the 1920-’30s era and had an affinity for bizarre antiques and Hollywood starlets.

Owned and operated by brothers Marc and Dominic Pitz, Dizz’s As Is—nestled in an old shingled house on Coast Highway—has been a favorite among locals for decades. Observing the camaraderie among patrons and staff, it’s easy to see why.

The restaurant was purchased by the Pitz’ Belgium-born father in ’77, and it’s been family-run ever since. The name was handed down from the restaurant’s prior owners—a couple of stoners who were always “dizzy.” The “As Is” part was added to credit said-stoners for the left-as-is decor—mismatched memorabilia and dining accoutrements, from plates and saucers to floral tablecloths and a vintage jukebox depicting an image of a pinup girl—that still adorns the establishment.

Offering a full, cozy bar (try Dominic’s delicious Gingertini, laced with cranberry vodka and ginger cognac) and both parlor and patio dining, Dizz’s serves up hearty meat and seafood dishes. Start with some warm sourdough bread, pate and buttered toast, and a glass of vermouth (to cleanse the palate) before biting into the to-die-for filet mignon, savory surf and turf, or one of the many other options (items are printed on individual, loose-leaf pages opposed to a traditional bound menu). Your side is a choice of pate, the soup du jour or a salad (the poppy is a must-try). Vegetarians can fill up on a salad and soup sampler (the French onion takes the bun!), but the baked manicotti stuffed with spinach, ricotta cheese and herbs is a tasty choice for healthier appetites. “Many of our recipes have Belgian or French influence and were passed down from our dad,” Dominic says. Their grandfather, a pastry chef, also graces the dessert menu with his mixed berry and whipped cream cake, baked inside an almond sugar crust and served overtop a sweet creme brulee sauce.

There’s no better way to cap off the evening than with an après dinner cappuccino—the tri-liquor comfort concoction is a surefire way to get toasty in the chilly fall evenings. Better to share with a friend, though, or you might leave a little, well, dizzy. LBM