From cured meats and creamy cheeses to a selection of accouterments and wines for pairing, these curated boards are great for sharing.

It’s not that charcuterie is a new trend—quite the contrary, actually. But beautiful boards filled with cured meats, cheeses, fruits, nuts and other accompaniments have taken the culinary world by storm, becoming a staple on many high-end restaurant and resort menus.

“It’s fascinating because the cheese and charcuterie world is out of control,” says David Serus, executive chef at Montage Laguna Beach.

When it comes to a nice charcuterie board, the possibilities are endless. Aside from how easily shared these snacks are and how portable they can be—making them easy to whisk off to the backyard patio or a picnic in the park—the level of customization they offer, especially when made at home, really adds to the overall appeal. “Charcuterie boards are gorgeous, artful platters that liven up any occasion, from a Friday night dinner with friends to a catered event with over 100 people,” says Laurent Vrignaud, owner of Moulin, a local French eatery inspired by European bistros.

Here, chefs from around town share tips for creating and customizing your own board while also revealing a little about the ones found in local eateries.

The Evolution of Charcuterie

The art of creating charcuterie has been perfected over the years—more than 500, in fact, dating back to the 15th century. “People started putting meat and fish in salt as part of the curing process to conserve so the food wouldn’t go bad,” Serus says. “… Putting meat in a cover of salt will extract some of the moisture and, by dehydrating it, you are able to serve the food longer.”

“Before refrigeration, many foods were stored in basements or other cold areas,” adds Vincent Terusa, Selanne Steak Tavern’s executive chef. “In France, this area was known as ‘garde manger,’ which means ‘keeper of the food.’ This is a cool and ventilated area to prepare cold dishes as well as store other foods—many times, this included leftover meats and scraps.”

While food preservation was a major part of the beginnings of charcuterie, according to Vrignaud, who was born and raised in Paris, that wasn’t the only reason it came about. “Charcuterie is grounded in the belief that no part of the animal should be wasted,” he explains.

Serus, who also grew up in Europe, says they used to make charcuterie at home in Le Mans, France. “My family, once a year, we’d kill a pig,” he recalls. “You’d eat everything on the pig. We’d make sausage, we’d make rillettes, we’d make pork pate; everything was used.”

Later, in the 17th century, Serus says people began to experiment a little more with charcuterie, expanding it to things like pork, saucisson, duck and venison.

And although the curated boards filled with perfect pairings have reigned supreme in the United States throughout the last few years, he says European charcuterie is still just as simple as ever. “In France, we actually eat charcuterie with bread, butter and then the [meat] … on it,” he explains.

With the popularity skyrocketing stateside, he says new trends are beginning to emerge. “To me, it’s interesting to see that the technique used on vegetables—for example, right now we’re making celeriac pastrami with the same process,” Serus notes. “You cover it in spices and you hang it in a refrigerator for three weeks. It dries out naturally, the moisture just evaporates, and then it concentrates the flavor and, by doing that, you can keep serving it for three months. It’s funny to see the extraction of the moisture through the curing process being expanded to more than just charcuterie.”

When it comes time to plan a charcuterie board of your own, the two most important parts are the charcuterie, or meat, and the cheese. “It’s really based on preferences,” Serus says, but as a rule of thumb, Montage adds three meats and three cheeses to its boards.

There is no hard and fast rule about which pieces to incorporate. “Most important to include is a variety of textures and tastes on a charcuterie platter—a specific meat or cheese is not the main consideration,” Terusa says. “For instance, [at Selanne,] we like to use cheeses from different milk sources: cow’s milk cheese, goat’s milk and sheep’s milk. The texture is also important to consider so we have a hard, soft and perhaps a triple cream or super soft. The same goes for the meat selection. We might use a beef product such as bresaola, and pork products such as soppressata and finocchiona. And we’ll include a pate or a duck rillette for the soft texture that is creamy and spreadable.” Although the restaurant has not yet started offering its Tavern Menu again (where the board is listed), it will return closer to summertime.

This wide range of textures and tastes is similar to what Serus does at Montage, where he tends to offer a blue cheese as well as a hard variety, like cheddar or Fiscalini, and an option with a soft rind. While the resort offers these boards as part of its in-room dining selections, they also will be returning to the Lobby Lounge when it reopens. “You can order a cheese board for two to share with a glass of wine—it’s the perfect setting,” Serus says. “You can nibble or snack on that before you go for dinner.”

He also likes to support California creameries by including cheeses from throughout the state in the Montage selections. “I think it gives our guests a good sense of place,” Serus explains. They also present a card listing the cheeses on the board to diners so they’re able to remember the names and types for future visits.

At Moulin, the charcuterie is currently available to go; Vrignaud will also be adding it as part of the indoor dining experience once the bistro rolls out longer hours for summer. The best thing about this board is its customizable nature, as the eatery allows diners to choose their meats and cheeses, which are accompanied by fresh-baked baguettes and accompaniments. Serving four, eight or 12 people, options for charcuterie include pate, rillettes, salami, jambon de Bayonne and more, while cheeses range from brie to Comte.

McClain Cellars, best known for its signature wine blends, also offers a curated board, allowing wine tasters to take control over their appetizer. “Salami and prosciutto are the staples for any respectable board,” says owner Jason McClain. “It’s not just the meat, however. … A strong aged white cheddar, soft brie and aged smoked Gouda will go great with a cracker. … A good board should speak to variety. The more you add, the better it will be.”

Cured meats and cheeses are the highlights of any board, but that doesn’t mean that the accompaniments aren’t equally as important. These items, which range from fresh and dried fruits to nuts, spreads and even wine, can make or break the experience.

“Always think of balance,” McClain says. “That is the key. I like to create a board that has the meats and the cheese in the middle and the layer in the grapes, nuts and chocolate along the sides.” He says that a spicy jam and a low-salt cracker can be great complements, while McClain Cellars also offers things like pistachios, fresh grapes, olives and figs.

At Montage, many of the accompaniments are rotated based on what else is on the board. “We change our condiments based on the cheeses that we offer,” Serus explains. “Blue cheese is more aggressive to your palate so we use honeycomb, because the sweetness is going to cut the … [aggressiveness]. We do a homemade jam, whether it’s berries or figs. And then we do fruit and nuts. Most of the time we use roasted marcona almonds because it’s a food complement to any cheese really.”

To pair with the charcuterie itself, he recommends cornichons (small pickles), savory olives and Dijon or whole-grain mustard to enhance the flavors in the meats. He said the bread is also important, and Montage relies on staples like simple grilled sourdough, crostini with dried cranberries and nuts, and fresh confit fruit bread. “Before, pre-COVID, at night, we’d start with 50 cheese boards and we would pretty much get wiped out every night,” Serus says. “It’s very popular.”

When it comes to wine pairings, Vrignaud says that the ultimate accompaniment is a glass of French red wine. “The key is to balance flavors by including a range of items that are salty, sweet and acidic,” he says.

Serus also suggests red wine, but says, “The stronger your charcuterie, or the more gamey it is, the stronger the wine you want to have. … Pinot noir is good. Or go with a syrah, a cab, a merlot, something maybe a little older that’s more robust to complement the charcuterie you’re serving.” He adds that Montage also likes to incorporate California wines in addition to the local cheeses.

McClain, who specializes in wine, says that these pairings provide endless opportunities. “The great thing about a good board is that you can create one to go with any wine. A good board is based on introducing salt,” he says. “Salt is something the body craves and wine complements. The salty and savory flavors of the meat or the cheese will enhance the fruit aromas of the sparkling and light-bodied white wines. Full-bodied whites have the structure to match these firmer, bolder cheeses or spicy meats. The saltiness of cured meats or robust cheese can also support the tannins and structure of medium-bodied red wines.”

Try the brand’s 2018 Three Daughters cabernet sauvignon, the 2018 Love & Happiness pinot noir or, for something heavier, the 2018 Covent Garden malbec. For a light, white blend, McClain recommends the 2019 Staycation, which incorporates grenache blanc with albarino and viognier.

Whatever way you opt to customize your charcuterie board, whether at home or while out and about at Laguna’s restaurants, the freedom to choose ensures that you’ll find something to satisfy your taste buds no matter where you are. 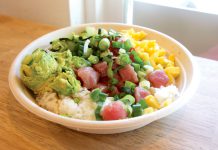 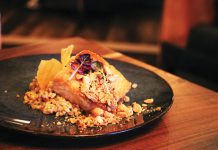 Taste of the Tropics 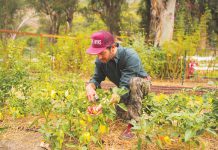 How Does Your Garden Grow?