On May 31, more than 500 guests played gourmands for an evening as they sipped wine and experienced 12 of Laguna Beach’s finest eateries, which set upbooths at seven-degrees. Yet, the gluttony wasn’t in vain—the event, in its 19th year, benefits numerous local charities and, this year, raised more than $85,000. In addition to sampling bites from restaurants, including Okura Robata Grill & Sushi Bar, Nirvana Grille, K’ya Bistro, Thai Bros. and Las Brisas, guests had the opportunity to bid on 75 pieces of coveted art from local artists such as Tom Swimm. Moreover, a variety of raffle prizes, chock-full of items donated by homegrown businesses, were displayed for both raffle and silent auction. Among the beneficiaries of the event were the CSP Youth Shelter, First Thursdays Art Walk, Laguna Beach Community Clinic, Laguna Beach Live!, Laguna Beach Plein Air Painters Association, Laguna Board of Realtors Charitable Assistance Fund, No Square Theater, Artist’s Fund of the Festival of Arts and Laguna Food Pantry. (lagunaboardofrealtors.com) —A.T.

SHARE OUR STRENGTH’S 7TH ANNUAL TASTE OF THE NATION

Share Our Strength’s 7th Annual Taste of the Nation Laguna Beach Celebrity chefs and foodies alike united at Montage Laguna Beach on June 8 for one of the city’s premier culinary events, Taste of the Nation, which benefited the No Kid Hungry campaign spearheaded by national nonprofit Share Our Strength, striving to end childhood hunger through its many programs and initiatives. The annual tasting event, which brings farm-to-table delicacies from renowned chefs and sommeliers around the country, raised more than $200,000 for No Kid Hungry and benefited local charities such as the Community Action Partnership of Orange County and Second Harvest Food Bank of Orange County. These funds are instrumental in combating this universal issue that not only affects one in five children across the country but also approximately 200,000 kids in Orange County. On the resort’s oceanfront bluff, guests savored fine wine and cuisine from 10 chefs, including Montage Laguna Beach’s own Studio Executive Chef Craig Strong as well as chef Alan Wong of Alan Wong’s Restaurants. (nokidhungry.org) —A.T.

A treat for the senses, Laguna Dance Festival’s 10th anniversary celebration, Carnival, featured a tantalizing dinner, Brazilian-style music, a red-hot salsa dance performance and expressive contemporary ballet pieces, complete with lifts and spins that had audience members holding their breath. The June 12 event, attended by 150 supporters at seven-degrees, marked a milestone—since its inception in 2005, the festival has presented 35 dance companies, 55 performances, 30 master classes and more than 40 free events. This annual celebration of dance—from classic to cutting-edge—is the brainchild of former professional ballerina Jodie Gates, who received a special award at the Carnival celebration for her leadership, dedication and artistry over the last decade. Also at the event, a retrospective video showcased festival performances through the years, attendees kicked up their heels on the dance floor and bid on a variety of silent auction items, and an impressive lineup was announced for this year’s festival, Sept. 11-14, at Laguna Playhouse. (lagunadancefestival.org) —S.S.

Striking landscape paintings, sculptures and other artwork were sold in live and silent auctions at the 25th Annual Collector’s Choice on June 21, raising $250,000 for much-needed student scholarships at Laguna College of Art & Design. LCAD supporters Terry Smith and Wayne Peterson were honored at the art-filled soiree attended by 400 people, who enjoyed a gourmet dinner before moving on to a bistro setting for live jazz music, desserts and coffee. The main attraction, however, was the live-auction bidding on masterful artwork as well as special dining and accommodation packages from Montage Laguna Beach. Money raised at the event goes to support LCAD students like recent alumna Charity Oetgen, who spent three months in the Democratic Republic of the Congo to study and paint bonobos (a type of ape) in their natural habitat—renowned primatologist Dr. Jane Goodall is among collectors of her work. Charity went on to co-found an organization that assists nonprofits by selling donated art to raise funds. Speaking at Collector’s Choice, Charity shared how a scholarship helped her realize her dreams and also, how one student’s dreams were cut short—Nina Fitzpatrick was killed after being hit by a car in a crosswalk on Laguna Canyon Road. In memory of her passion for art, a scholarship has been established in Nina’s name to help other students. (lcad.edu) —S.S.

More than 60 surf industry executives and supporters of the Surf Industry Manufacturers Association (SIMA) Environmental Fund, which serves as the nonprofit arm of SIMA by raising funds for ocean preservation, gathered for the 10th annual Waterman’s Weekend Underwriting Party on June 5. The exclusive event, which was held at the home of Clay and Delphine Berryhill of Laguna Beach, helped to raise more than $30,000 for Waterman’s Weekend, a two-day fundraising event hosted by the SIMA Environmental Fund that includes the Waterman’s Classic Golf Tournament at Monarch Beach Golf Links at The St. Regis Monarch Beach and the Waterman’s Ball at The Ritz-Carlton, Laguna Niguel. After sipping drinks and dining on appetizers, guests participated in a live auction and were entertained by live performances, including those by Taimane, Nick Hernandez and Phil Gough of Common Sense. (sima.com) —A.T. 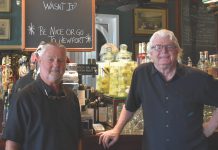