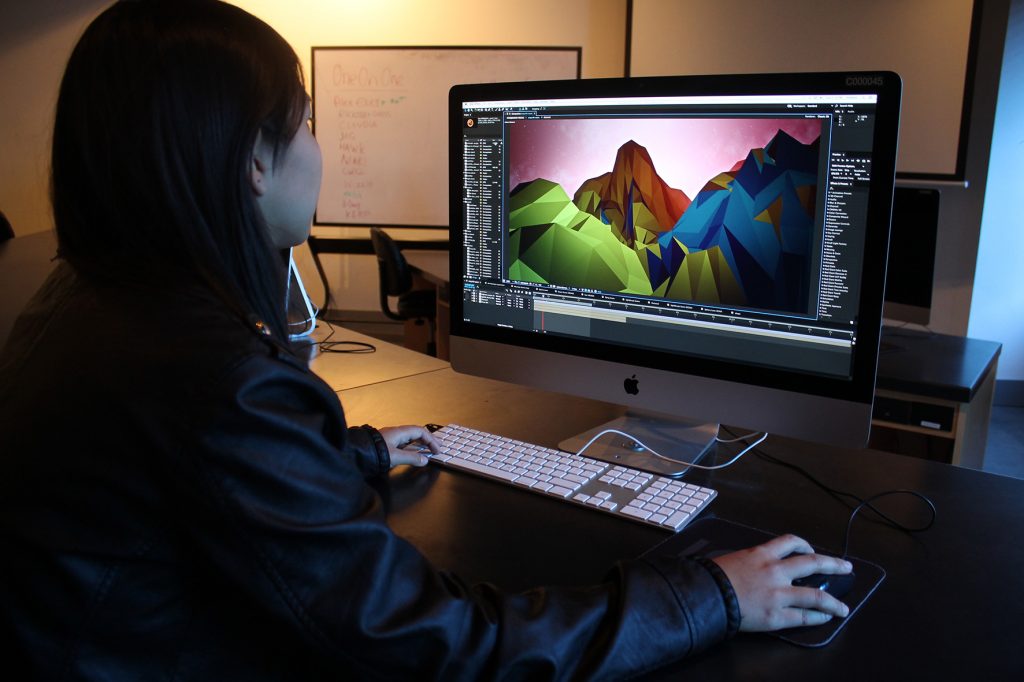 Digital creations make an award-winning splash in Laguna Beach,  solidifying the city’s presence as an artistic haven for both traditional and modern mediums.

Digital art is a unique form of expression that constantly evolves technologically and creatively—and it continues to spread geographically around the globe. Last September, Laguna Beach stepped into the spotlight when Laguna College of Art & Design (LCAD) was chosen as one of the top design schools by LG Electronics USA’s new-media art competition, The Art of the Pixel: Powered by LG Ultra HD 4K and OLED TV; the school’s design and digital media program was awarded $25,000 for winning the popular vote. LCAD student Dohee Yang was a finalist and received $5,000 for her work, titled “Journey,” which, as she shares, was only part of the overall reward.

“In the process, I even taught myself how to use certain programs and discovered the possibilities of what I could do,” Dohee says. “It felt good to know that [the] time I had put in had paid off and that I was going to receive recognition for the work I was doing.”

Dohee’s award is just one of the latest examples of how digital technology is slowly influencing more Laguna-based artists with each passing year. And with LCAD’s increasing presence as one of the top design and digital media programs in the country, there is no doubt that the town’s reputation as a prominent Southern California art center will continue to grow beyond expectation.

Although digital art is still fairly new in Laguna Beach, this combination of mixing digital technology with creative vision has been slowly gaining ground since as early as the 1950s, when it was mostly known as computer or multimedia art. The late Andy Warhol brought the medium to the mainstream in 1985 when he was commissioned to demonstrate graphic arts capabilities on a Commodore Amiga computer. During the demo, Andy took a digital snapshot of Blondie’s Deborah “Debbie” Harry, then manipulated the colors using the paint program ProPaint. Last year, more of Andy’s Amiga experiments—ranging from doodles to drawings of Campbell’s soup cans—were discovered on floppy disks.

Other traditional artists have evolved from the paintbrush, pencil and paper to a computer pen stylus, mouse and graphics tablet to create two-dimensional vector graphics and 3-D visual effects. Some have even included audio and video effects using advanced software to enhance their creative works.

Local artist and Festival of Arts exhibitor Murray Kruger delved into the digital world in the early 1990s when he began to learn about Photoshop, Adobe’s popular graphics and image editor. After registering for various computer classes, he began to explore digital art programs such as ZBrush, which he says enables artists to sculpt 3-D forms as though they were pieces of clay.

“Despite its somewhat alien interface, I felt like a technical barrier had been lifted, and with a little study and practice, some amazing things started to happen,” Murray says. “[It] was like a light went on and I was doing stuff with this program and creating imagery that I couldn’t do as a painter, and it’s been an exploration ever since.”

Other well-known Laguna-based artists and art teachers have had similar success in expanding into the digital art realm. Catharin Eure, chair of LCAD’s design and digital media program, entered the world of digital art by attending the Rhode Island School of Design. In addition to painting and drawing classes, she learned more about how to problem-solve through what she calls “visual thinking,” especially when it comes to utilizing digital art for marketing and advertising.

Sandy Appleoff, the chair and founder of the LCAD game art program (who is now piloting the new Master of Fine Arts in the art of game design), has always loved painting utilizing water-based pigment mediums. After expanding her horizons by working with Photoshop while teaching at the Kansas City Art Institute, she pursued her MFA in scenography at the University of Kansas, where she learned computer-aided design programs AutoCAD and Vectorworks. They soon served as the foundation for her love of spatial design, especially the 3-D world of stage lighting and how various illumination levels can convey the overall mood and story.

“My watercolor costume concepts, which were still a faster way of working for me at that time, were scanned into Photoshop and Corel paint [program] to bring period textiles and nuance color to the final designs,” Sandy says. “[They were then] placed in my final 3-D renders for the director, much like the pipeline for concept development in game art today.”

Her educational arc led to her influencers in the digital art world, including artists and LCAD lecturers Nathan Fowkes and Patrick Faulwetter, who have been instrumental at the college’s game art program.

Although digital art has proven to be a major boon for many local artists, its popularity with Laguna Beach as a whole has been a slow, yet patient, process. Murray recalls how, in 2006, he became the first digital artist to enter in the Festival of Arts. His multiple appearances there resulted in him selling his work, “The Magician,” to the festival in 2011.

“It was a good feeling to be a part of something new, and I feel it was actually pretty progressive on the festival’s behalf,” he says. “When the Festival of Arts bought one of my pieces for their permanent collection, it was an honor and a great validation for this kind of art.”

Digital art’s popularity also has spread to many of the students attending LCAD. Dohee recalls being overwhelmed by Laguna’s beauty when she first moved here; she notes that the environment inspires not only her art, but the work of her fellow artists.

“Laguna Beach cultivates an environment where the art culture is booming, where so many art festivals, pageants and art walks take place,” Dohee says. “When creating things digitally, it helps to pull references from the real world because you can’t beat the beauty of Mother Nature.”

Sandy adds that Laguna Beach not only nurtures the artist from a creative standpoint in terms of source materials for game art, it also serves as the perfect location for LCAD, a cultural campus where media professionals visit from around the world in order to recruit future candidates, as well as keep up to date with the latest technologies.

“Laguna Beach is blessed with inspiring aesthetic and location,” Sandy says. “For the game art major, LCAD is positioned in the heart of Laguna Beach, which is amidst some of the greatest game companies in the world.”

The future of digital art in Laguna Beach continues to be promising, especially with LCAD’s influence. The school’s design and digital media program has received numerous accolades in addition to its latest award, and it continues to enter prestigious digital art contests. It also has been researching 3-D printing, exploring that tool’s possibilities with toy design.

For the last four years, LCAD has hosted its annual summer Game Development Camp, which aims to introduce high school students to the art and industry of game design. Magy Seif El-Nasr, the director of game educational programs and research at Northeastern University, created the idea of the Game Camp after conducting a number of workshops for students in middle and high school. 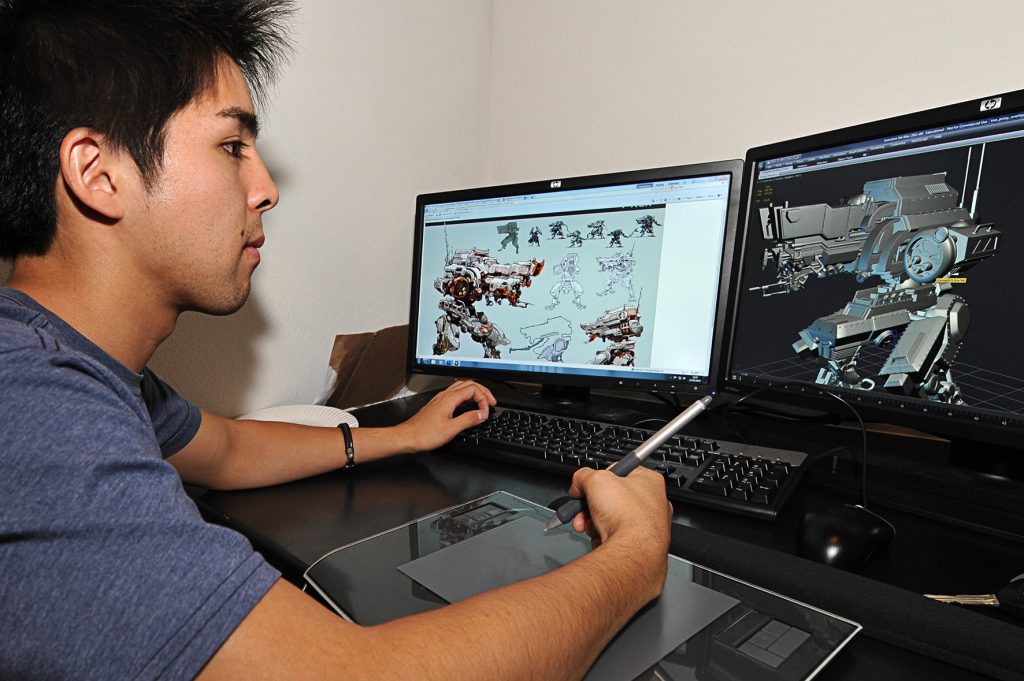 “It has stimulated students to understand what interests them career-wise,” she says. “I had several great examples of kids who took this workshop … and now are writing their own business proposals to build their first game companies.”

Magy shared her experiences with Sandy Appleoff, the chair and founder of the LCAD game art program, resulting in the creation of Game Camp on the Laguna campus. This year, it will include classes discussing career goals and the different levels of the game production process, such as art, design and programming. Students will also learn about creating, pitching and implementing a game idea, as well as developing prototypes and High Level Design (HLD) documents. Other lessons will cover art content creation; handling input and score; checking interactions such as variables, flags and character animation; and researching the game’s intended audience.

Magy stresses that the most important aspect of the Game Camp is for the students to cooperate in a teamwork environment from the concept to the complete product, an important lesson to learn when it comes to the gaming industry.

“This allows them to work together collaboratively in a short cycle of idea inception, prototyping and testing,” she says. “They see all the aspects of product development as well as the team and coordination efforts needed, but in a small scale and a very fast development cycle.”

According to Magy, this year’s Game Camp—taking place July 6-9 and July 13-16 (the deadline for registration is April 14)—will follow the same format as previous years. The highlight of the program will be when the students present their games to an audience of not only their families, but also professionals in the gaming industry.